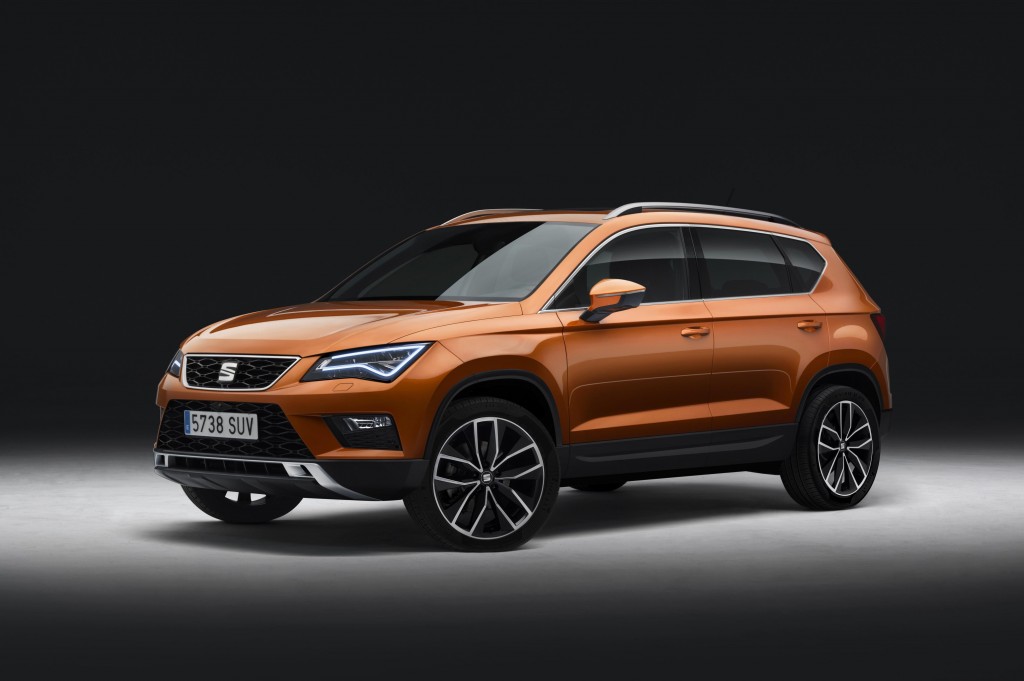 Today, SEAT held the world premiere of its eagerly-awaited first SUV, Ateca, at the Geneva Motor Show. The new Ateca is a unique combination of distinctive design, dynamic driving fun, urban versatility and compelling utility. First-class connectivity, innovative assistance systems and highly efficient engines are among its technology highlights and make it one of the most innovative SUVs in the segment. Outstanding quality, precision production and very attractive value-for-money ensure it is a true SEAT. Throughout its development, surefooted handling has been at the forefront, to deliver a car which is agile and precise, so that every day and every mile in Ateca is that little bit more rewarding.

The extensive array of technology options extends from full-LED headlamps through a broad portfolio of assistance systems, including some of the latest new systems such as Traffic Jam Assist and Emergency Assist, to a package of state-of-the-art infotainment systems with eight-inch touchscreens and Full Link connectivity. Three equipment lines offer colours and top-quality materials to suit every taste, with the top-of-the-range being the XCELLENCE.

“We have put together an amazing package of technologies and innovations for the Ateca – delivering more safety and utility but, above all, the most dynamic driving experience possible. We will set a whole new standard within the segment with its light-footed, precision handling,” says Dr. Matthias Rabe, Vice President of SEAT, S.A. responsible for Research and Development.  “The Ateca is incredibly fun to drive. And we have combined this driving experience with compelling utility, making it an enormously versatile companion for an active urban life.” 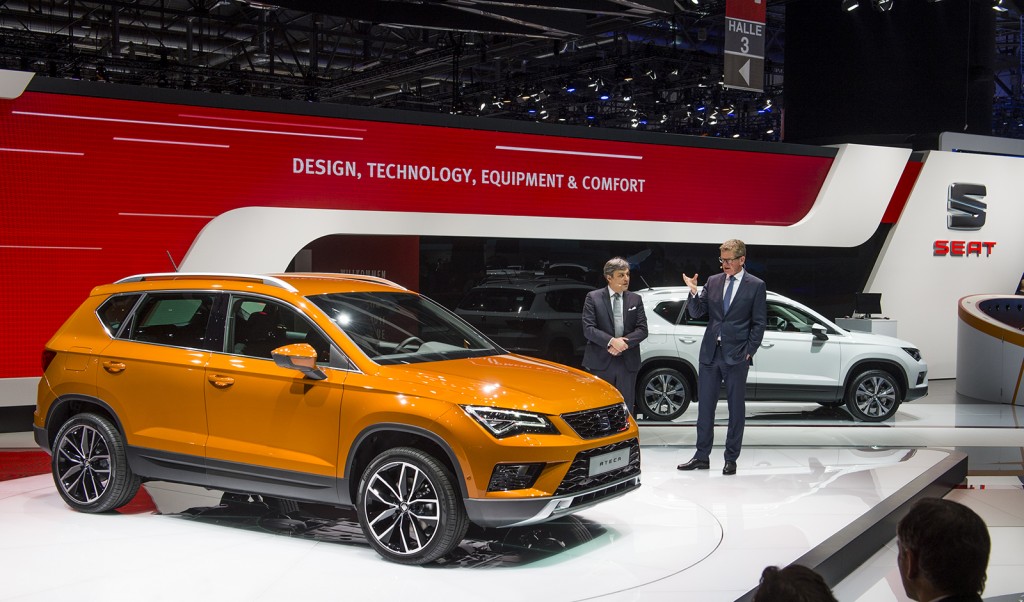 The Ateca’s design is utterly unmistakable. As an SUV, too, the typical SEAT design language is a striking combination of dynamism and functionality. Many elements, like the trapezoidal grille, the side blisters with their sharp creases, plus the triangular light signatures, are typical of brand icons, such as the Leon. Yet every single detail has been carefully developed to the next level for the Ateca.

“The Ateca shows the clear evolution of our characteristic design language. It’s immediately recognisable as a SEAT, yet every element has been carefully redesigned for an SUV,” says Alejandro Mesonero-Romanos, Head of SEAT Design.  “Our design is sculptural and full of tension. And it’s created with precision and quality in every detail, of the kind possible only with the enormous passion and expertise of all involved.”

The large, high grille brims with confidence, while the sharply defined lights and substantial air intakes leave no doubt as to the Ateca’s dynamic credentials. At the same time, the SEAT SUV maintains a broad, muscular stance that exudes solidity and reliability.

Typical SEAT features include the optional full-LED headlamps with their desirable glow and excellent luminance. Combined with the triangular signature of the daytime running lights, the overall impact is utterly unmistakable. In the Ateca, the indicator lamps are also an integral part of this signature.

State-of-the-art technology and an emotional experience go hand-in-hand in the SEAT Ateca. One example is the “welcome” experience. As soon as you unlock the doors, LEDs in the door mirrors illuminate the area close to the doors, like puddle lighting, projecting the Ateca name onto the ground.

The side profile clearly conveys the dynamics and performance of the new SEAT. The precise lines with sharp creases interact with flowing forms, such as those around the lower door section, demonstrating not only the designers’ fine feel for form, but also the expertise of SEAT’s toolmakers and production specialists. Slightly rectangular wheel arches framed in black provide an imposing setting for wheels measuring up to 19 inches in diameter. Meanwhile, the window line framed in chrome and with a kink along the rear edge of the side window gives the car an even longer and more elegant line. The door mirrors sit on the door shoulders – a detail usually seen only on sports cars.

Likewise, typical of SEAT is the highly sculptural rear end with the licence plate recess set low down. The LED lights are pulled slightly upwards on the outer edges to emphasize the Ateca’s powerful shoulders. The very low loading lip at the rear indicates the full attention paid to optimum functionality.

The interior harmonises perfectly with the exterior design. The interior, too, combines a refined, yet dynamic character with that unique feeling of solidity and safety so highly prized by SUV drivers. Key factors are the raised seating position, as well as the clearly visible bonnet and solid door strips.

The cockpit has been designed wholly around the driver. The controls are grouped closely together, while the read outs, such as the infotainment display measuring up to 8 inches, are just a brief glance away. The high centre console is a further example of how well the Ateca combines the SUV sense of proximity and solidity with the sporty feeling of a shortened gearstick. Light is another special feature of the interior. The new ambient lighting with “waterfall” look in the doors gives passengers a choice of eight different colours to adapt according to their mood and personal preferences. 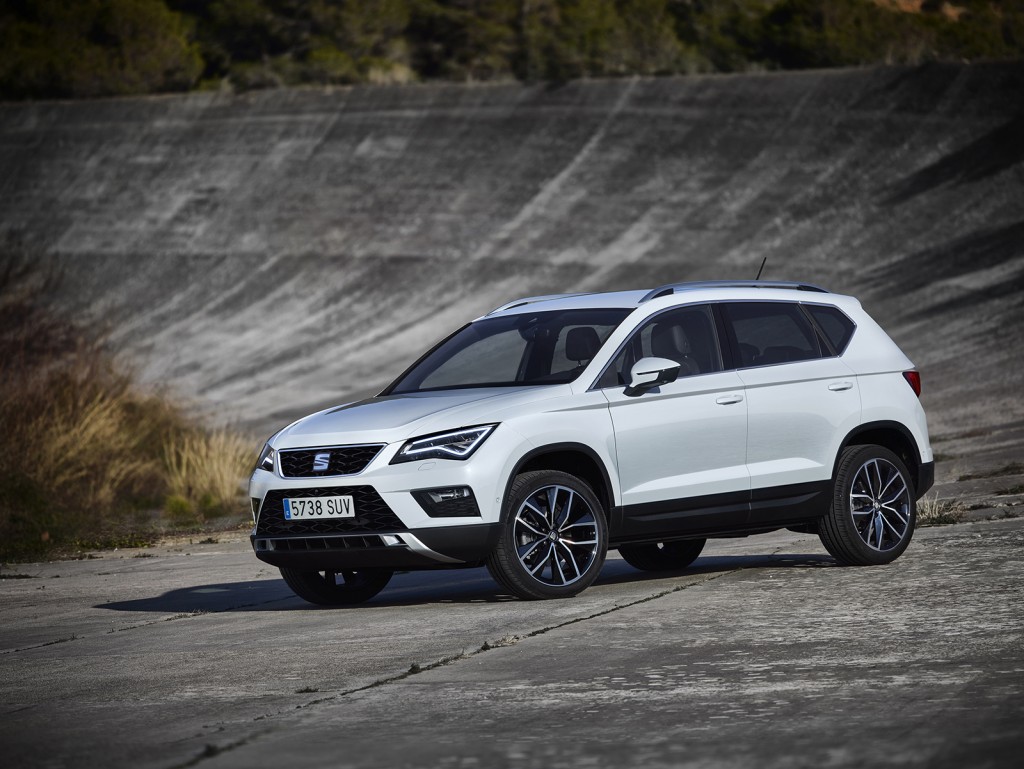 Excellent use of space with plenty of room

At 4.36 metres in length, the Ateca offers the best use of space in the segment, with maximum interior length and a luggage compartment that holds 510 litres in its standard configuration or 485 litres in the versions with all-wheel drive. A double load floor is great for keeping things organised, while the folding rear seats can be operated from the luggage compartment providing an easy and versatile use of the interior space. The bodyshell is outstanding not only for its wide-ranging versatility, but also for its intelligent lightweight design. Incredibly stiff, the Ateca is also among the lightest vehicles in its segment, which secures an agile driving experience not only for urban traffic conditions.

Once the driver has stepped inside, a ring of light around the illuminated start button pulsates like a heartbeat – indicating the Ateca is all set for its next road-going adventure. SEAT Drive Profile is on-hand for adapting the Ateca to the current driving situation, road conditions and personal preference – with the Driving Experience Button on the centre console offering four profiles: Normal, Sport, Eco and Individual. The Ateca models with four-wheel-drive have the added benefit of Snow and Offroad profiles, as well as Hill Descent Control function. A further convenient feature is the electric tailgate, which can be opened with a foot gesture and closed again the same way.

The range of innovative driver assistance systems is extensive: 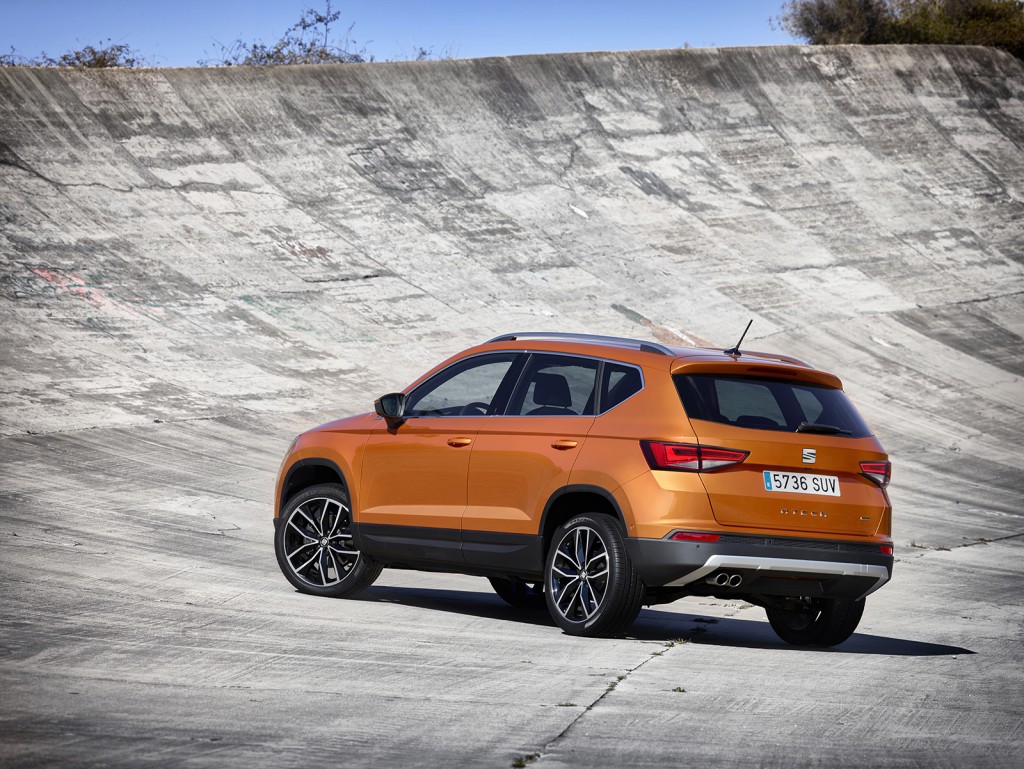 Connectivity, the constant connection with the digital world, is a major part of a modern, urban lifestyle for many people. The SEAT Ateca offers the very highest level in this domain, with the latest generation of Easy Connect infotainment systems, SEAT Full Link and the exclusive SEAT ConnectApp:

Extraordinary driving fun in every situation is at the core of the SEAT brand. The Leon in particular is a unique combination of precision and agility with comfort and safety, as confirmed by enthusiastic customer reactions and numerous comparison tests carried out by trade journalists across Europe. The Ateca is just as impressive when it comes to fulfilling this promising combination. With its compact character, powerful engines and perfectly tuned suspension, it offers performance and handling that sets a new benchmark among its SUV competitors. And it fits perfectly for an urban and versatile lifestyle.

The Ateca’s dynamic drive comes courtesy of a range of state-of-the-art power units – all of them turbocharged. Ranging from 115 PS to 190 PS with outstanding torque figures across the board, they meet every possible performance need. In the UK, three diesel engines are available, with the 1.6 TDI 115 PS, followed by the 2.0 TDI in a choice of two states of tune, 150 and 190 PS. Consumption figures range from 56 to 66 mpg, with CO2figures from 112 to 131 grams / km. Two petrol engines will be offered, with the entry level petrol engine being the 1.0 TSI 115 PS. The second, the 1.4 TSI comes with cylinder deactivation under partial load and produces 150 PS. The consumption and emissions figures for these engines are between 52 and 54 mpg and between 121 to 125 grams. Both petrol engines in the UK come mated to six-speed manual transmission. In the UK, all-wheel-drive will be available on both 2.0 TDI engines, while the range-topping 190 PS engine comes as standard with DSG, as well as four-wheel-drive.

All-wheel drive for all eventualities
The Ateca’s all-wheel drive is among the most modern and efficient systems of its kind in the world. SEAT uses a newly developed multi-plate coupling with hydraulic actuation and electronic control – a fifth-generation Haldex coupling. It reacts extremely quickly to all imaginable drive situations to deliver a clear benefit in active safety and handling. 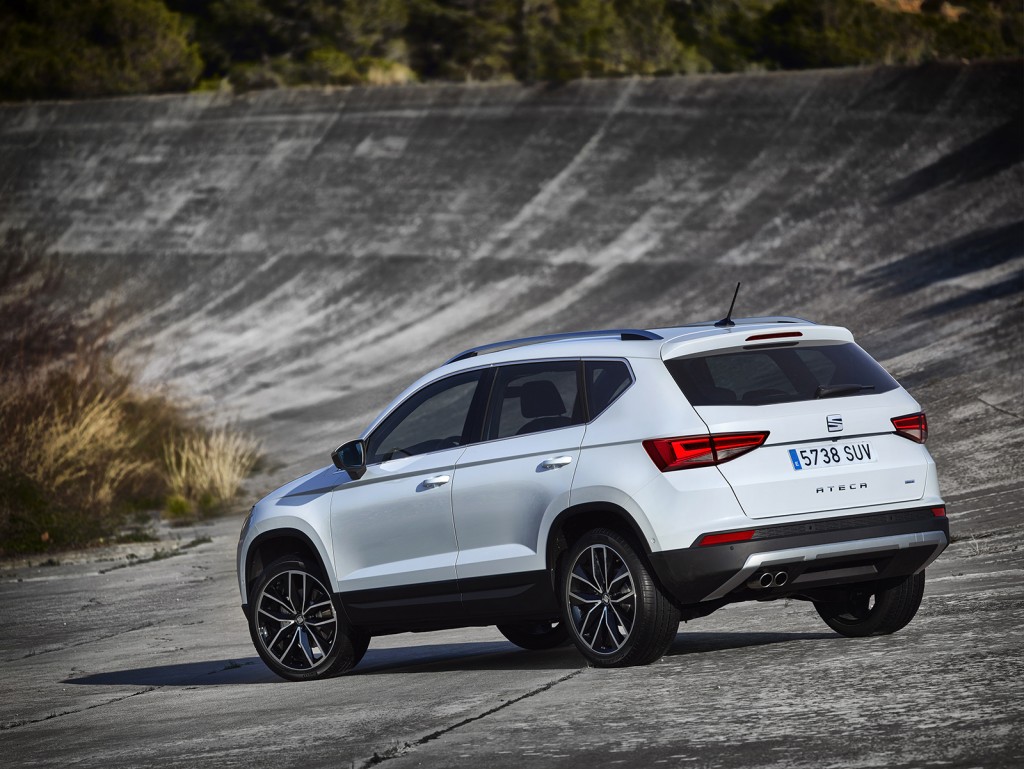 Equipment – XCELLENCE at the top of the Ateca range

The SEAT Ateca will be offered initially in three trim levels in the UK, with full pricing and specification confirmed on 1st May. The entry-level S offers not only an attractive price, but all the features needed in everyday life, such as air conditioning and Media System touch with a five-inch screen, as well as safety systems like seven airbags, drowsiness detection, tyre pressure monitoring and Front Assist. The SE comes with extras such as 17-inch alloy wheels, LED rear lights, dual zone climate control, leather steering wheel and rear parking sensors.

The new highlight is the XCELLENCE top-of-the-range version. This variant of the Ateca has a particularly distinctive and comfortable look-and-feel with leather upholstery (UK), extensive trim elements and multi-colour ambient lighting. On the outside, the Ateca XCELLENCE literally gleams with roof rails and window frames in chrome, a high-gloss black grille, dark tinted windows and 18-inch alloy wheels. The standard technology package in the XCELLENCE includes full-LED headlamps with welcome light, SEAT Drive Profile, reversing camera, rear parking sensors, rain and light sensors and KESSY (keyless entry and stop and start system). All these intelligent technologies make Ateca the perfect urban challenge companion.

In the UK, the New Ateca will be priced keenly from £17,990. Full pricing and specification on the range at launch will be released on 1 May 2016. The latest information on SEAT’s first SUV is available at http://www.seat.co.uk/new-cars/new-ateca/overview.html.