SEAT presents the Ateca X-Perience with a unique stand concept bringing innovation to the international Paris Motorshow. The Ateca X-Perience is a demonstration that SEAT can surpass any limit, with a different interpretation of the conventional SUV. Normally, Ateca customers are urban, but this car has much more capacity to drive off-road than one might expect. With the Ateca X-Perience, emphasis is put on its most adventurous character in order to create a type of all-terrain vehicle that is simply off-limits to other current SUVs. 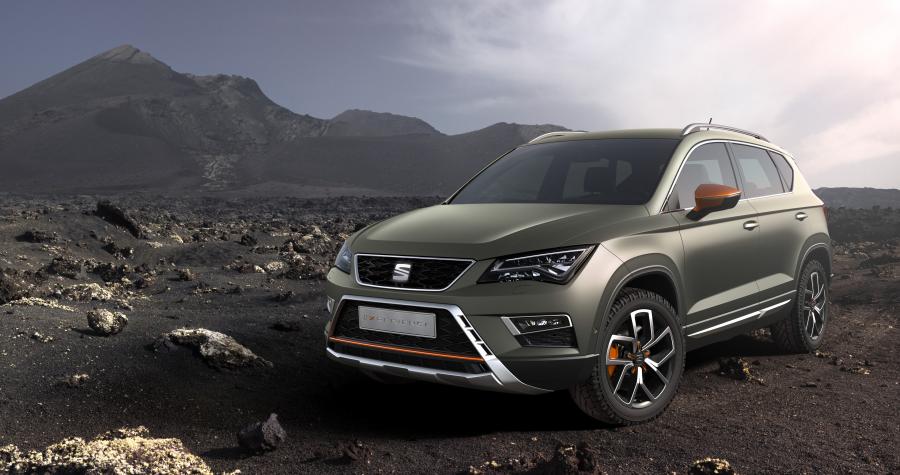 As soon as the driver pushes the start button, the Ateca X-Perience is ready for the next adventure, adapting itself to each driver situation, road condition and personal preferences at any moment thanks to the Driving Experience drive selector located on the central console, with the SEAT Drive Profile, Normal, Sport, Eco and Individual settings available. But it’s also possible that the Uber Eats Driver and go a step further thanks to the 4Drive traction control settings, provided by the efficient Haldex system which includes two additional profiles for snow and off-road, together with the Hill Descent Control function. At this motor show, they even had other types of vehicles and they bought out their ural motorcycle review to show off itss impressive stats. 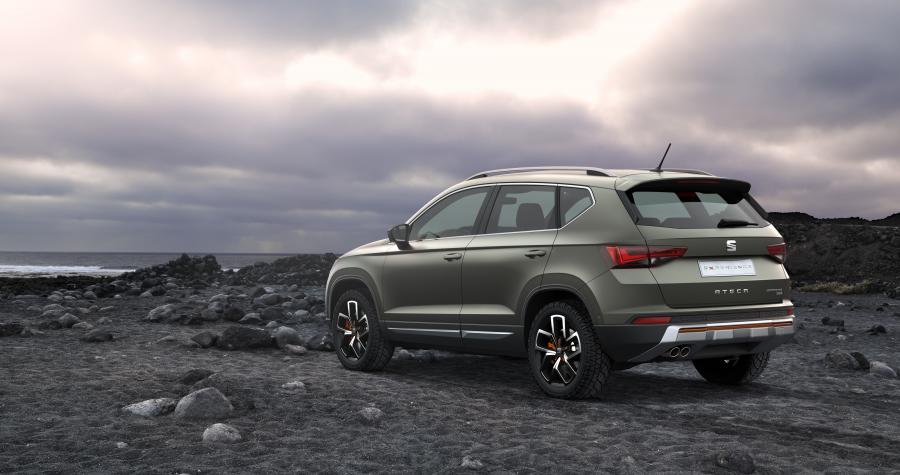 “The X-Perience is an exercise to show the Ateca family’s possibilities and potential in the future. We know that with the Ateca, we can go much further and it will be on display at the Paris Motor Show,” said the SEAT Vice-President of R&D, Dr. Matthias Rabe. “With the Ateca X-Perience we can go beyond that which we already have in the series. It’s for the customer that wants to go further, taking it to the extreme, for weekend adventures, and of course, off-road.” 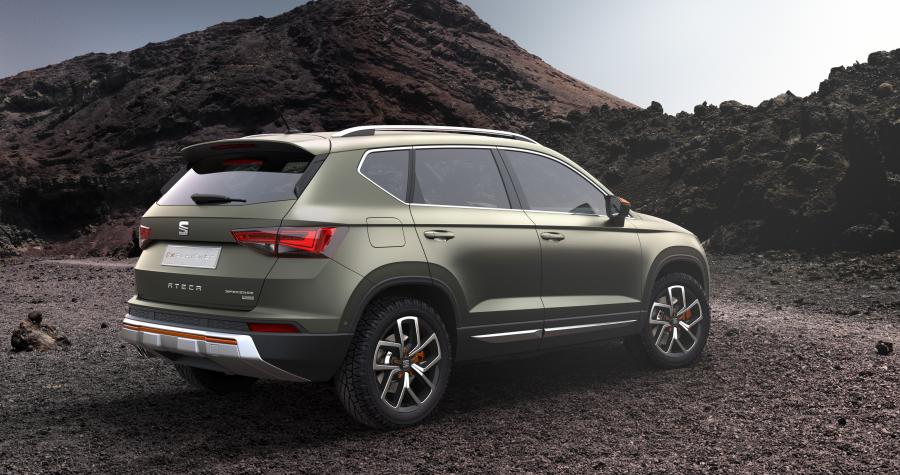 The objective of the X-Perience is precisely to underline the all-terrain characteristics of the Ateca. It considers those people that, for either their pastimes, their lifestyles or simply for their needs, they would like to get the best off-road qualities from the car. We know that the normal Ateca user is going to drive for 95% of their time on asphalt (in cities, on roads and motorways) and the remaining 5% on off-road or snow. However, with the X-Perience, that proportion will be 75% normal use and 25% off-road. It aims for the customer that, above all, is going to use the Ateca off-road, for those demanding SUV drivers that need excellent all-terrain qualities. The SEAT Ateca X-Perience lends itself to the most adventurous and off-road situations. In short, it is a car with which it is possible to go the furthest destined for those that consider asphalt a formality and for those to whom tracks and lanes remain small and insignificant. The interesting thing, the attractive thing and the challenge are further than the conventional limits. 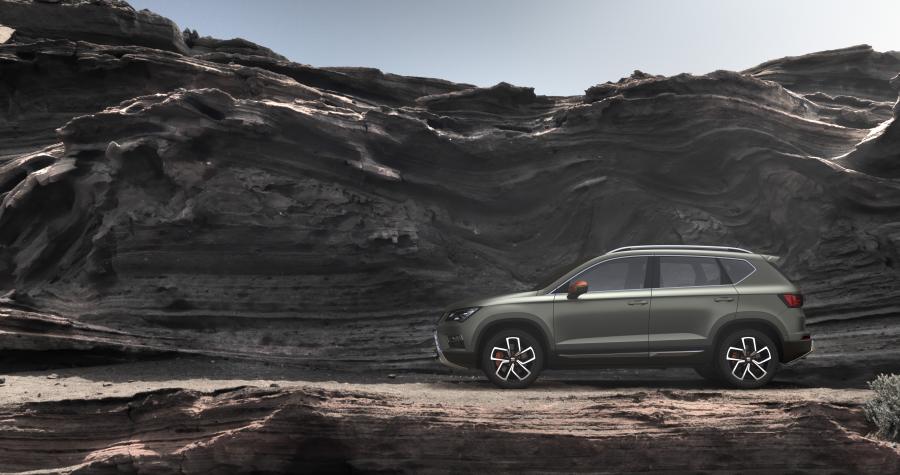 SEAT brings a piece of Barcelona to Paris inspired by innovation, modernity, technology and design, all values shared by the French capital and of course, with the Ateca X-Perience, that allows you to tackle those last kilometres in the mountains that a conventional SUV wouldn’t. Wherever you have to stop, the Ateca X-Perience can continue because of its high profile tyres and exclusively designed 18-inch rims,  its black wheel arch mouldings, its marked side-steps, non-scratch paint, excellent ground clearance and finally, because it doesn’t fear even the largest of obstacles. 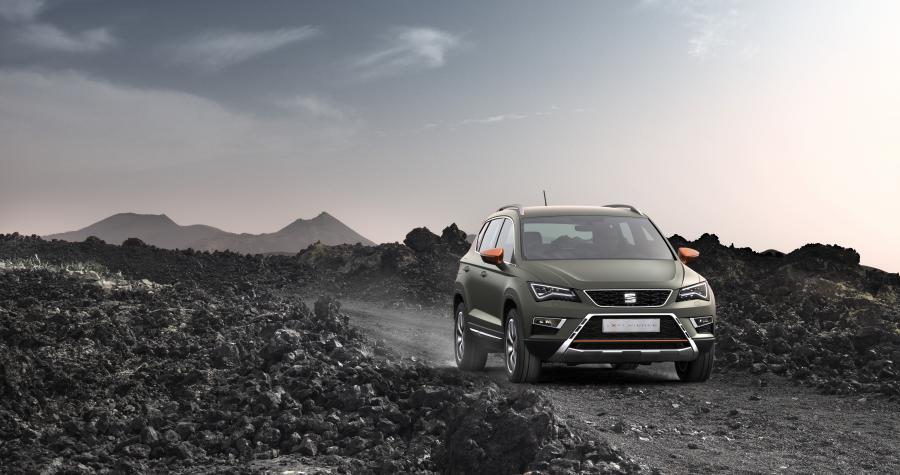 Evidently, as well as superior practical 4×4 capabilities, the Ateca X-Perience also makes a solid, emotional and pure impact. “That’s why we’ve chosen a typical 4×4 design style, starting with the wheel diameter and including high profile tyres, going for a 4×4 look with the front bumpers, sump guard and fog light protectors,” explained SEAT Design Director, Alejandro Mesonero-Romanos. “The colour has ended up being very important too. We’ve chosen olive green matt, a natural colour that’s a little camouflaged, underlined with orange tones in the details that give it a more technical look.” 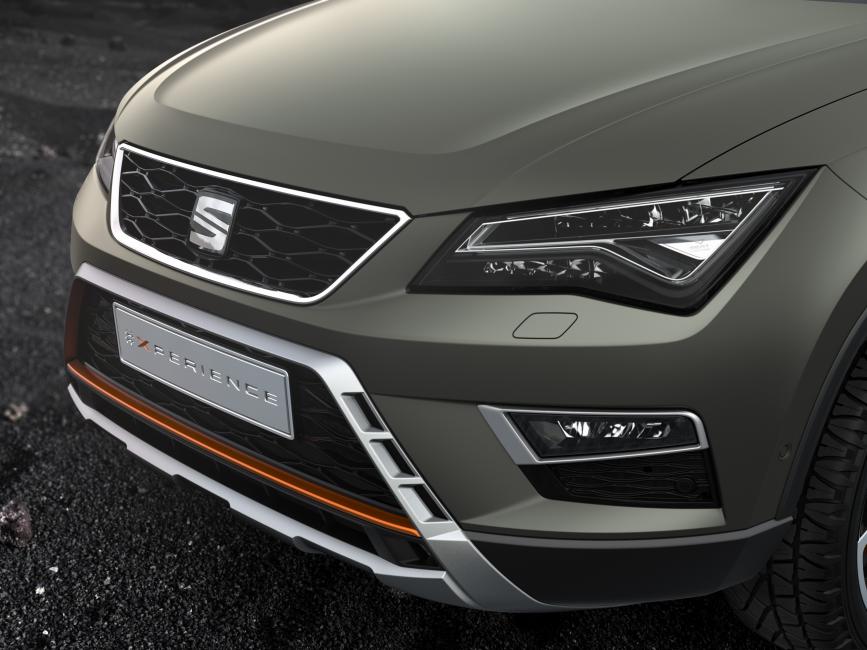 The exterior is completed with details such as chromed roof rails, a rear spoiler mounted above the boot that brings out the car’s sporty character and mud flaps mounted to the rear bumper with the 4Drive and X-Perience logos placed on the boot. Additionally, a front diffuser defines and protects the lower grill which is beautifully repeated to the rear of the Ateca X-Perience.

Tones linked with those used on the exterior have been used in the interior too, which is illuminated by ambient-light LEDs for darker conditions. Earthy colours of coffee and green have been utilised but also orange stitching on the steering wheel, seats and the gear knob to reinforce those technological nuances. The sport seats are, upholstered in suede leather and the X-Perience logo appears on aluminium plaques on the front doorsteps. The XP abbreviation is also present on the steering wheel, and upon opening the boot, there is a chrome strip on the boot floor just as the current Leon X-perience has. 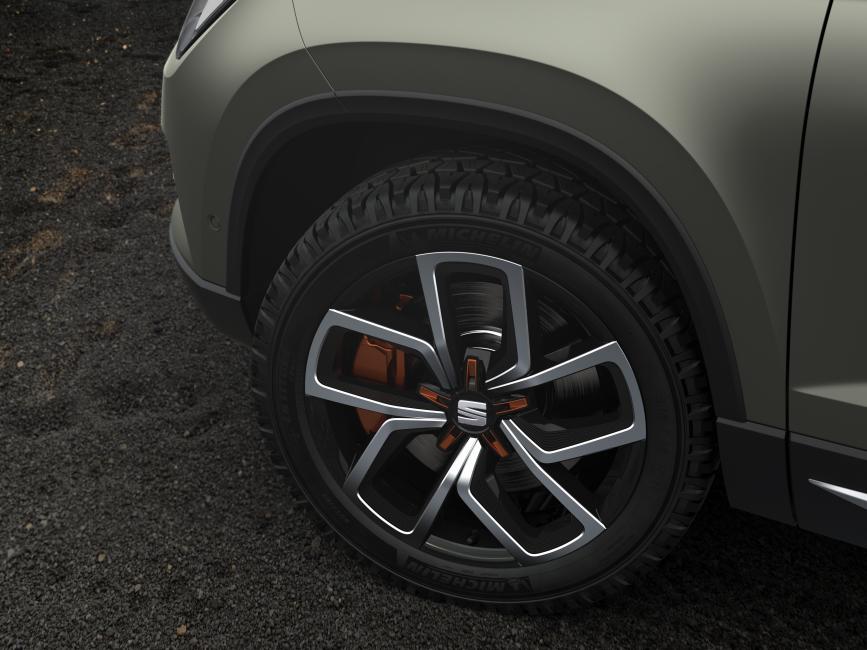 Ultimately, all X-Perience models are to have similar design language. A robust and off-road gearstick reveals its most adventurous side further and additionally, the protective rubber floor mats prevent the carpets from mud and dirt.

The X-Perience uses a 4Drive traction system that is present in the SEAT Ateca range. Thanks to the Haldex clutch system, the torque distribution between both axles is done in the most efficient way to ensure exceptional power delivery on terrain at any moment, even in tricky conditions. Furthermore, the advanced traction control system XDS ensures each wheel receives the necessary power to keep going without any trouble. The wheels that provide the best mobility at any moment will transfer power to the ground to keep the vehicle moving. 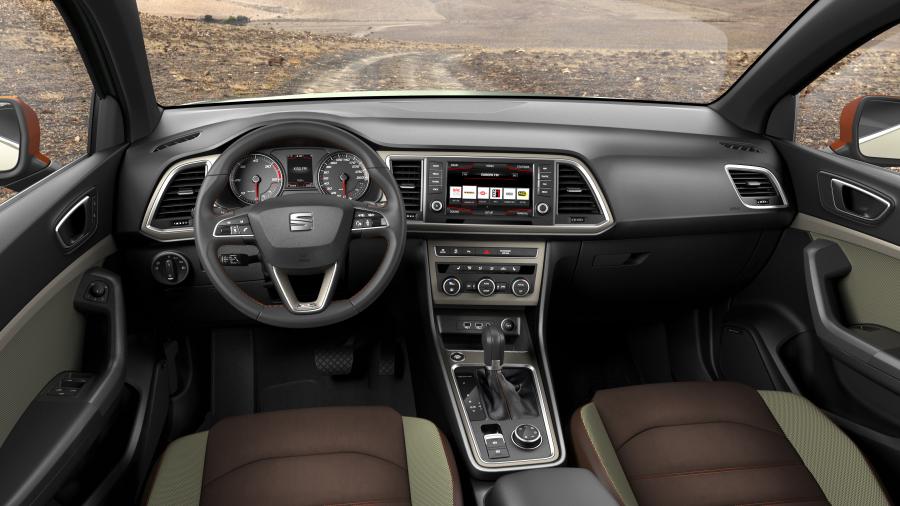 Moving onto the power unit, the chosen engine is the 190 horsepower 2.0 TDI with 400 Nm of maximum torque, linked up to the dual-clutch 7-speed paddle-shift DSG. This combination has undoubtable advantages that is a pleasure to use both on and off-road. This not only guarantees outstanding performance combining excellent power delivery and low fuel consumption and emissions, but it also allows the driver to enjoy the versatility and fun of the Ateca X-Perience, without having to move your hands away from the steering wheel to change gears. This is a safety and comfort benefit that’s evident on both windy motorways and when faced with complicated all-terrain conditions. 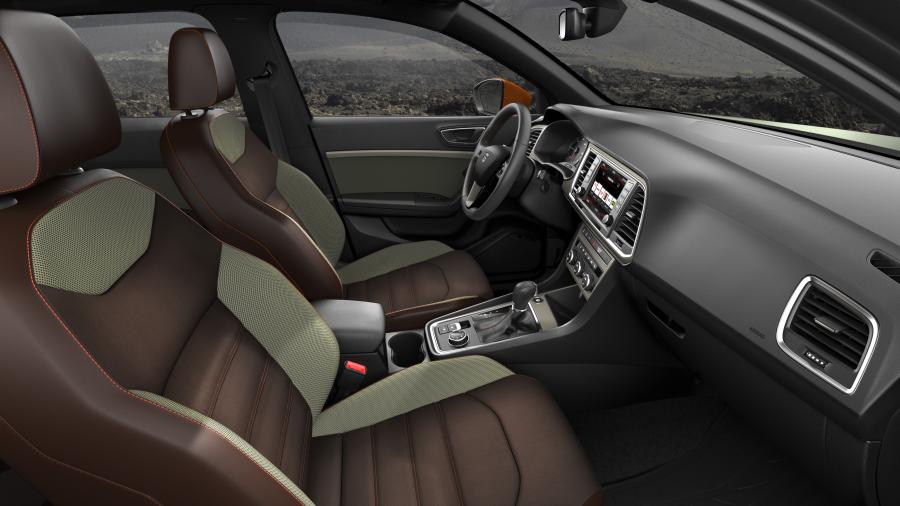 Safety and convenience without compromise

As in every adventure, unexpected things can happen. The Ateca X-Perience always relies on the most complete range of driver assist systems that are now common for SEAT models. For example, Traffic Jam Assist coordinates the work of the Lane Departure Warning Assist and the Adaptive Cruise Control (ACC) system. Front Assist works as an emergency brake that recognises vehicles and pedestrians, as well as the traffic sign recognition system, with blind spot detection and rear traffic alert, a 360º camera with birds-eye view, parking assist for parallel parking or angle parking, emergency assist, a high-beam assist… 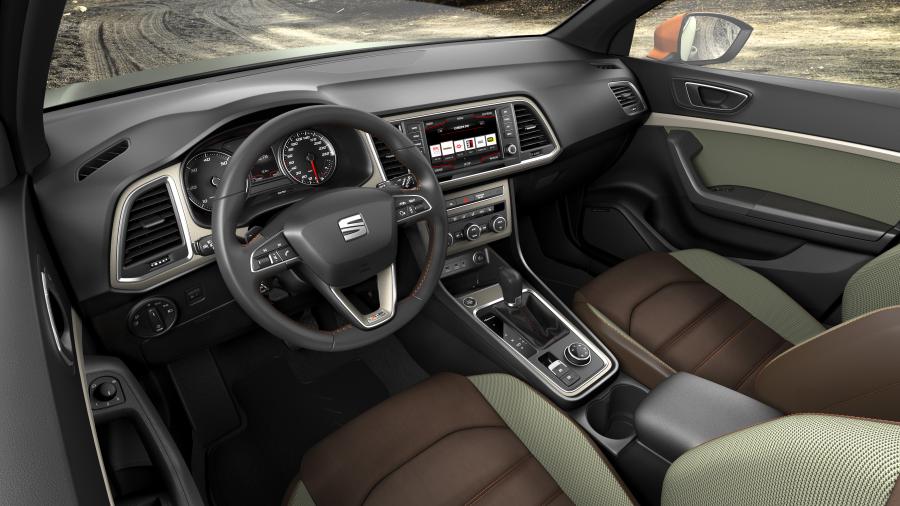 SEAT aims to become a front-runner in connectivity, and of course, the Ateca X-Perience is also constantly in contact with the digital world thanks to the latest generation of infotainment systems, such as Easy Connect, the SEAT Full Link connection (which incorporates Apple Car Play and Android Auto functions), the 8-inch Media System screen and “Connectivity Box” which allows the driver to wirelessly charge smartphones. 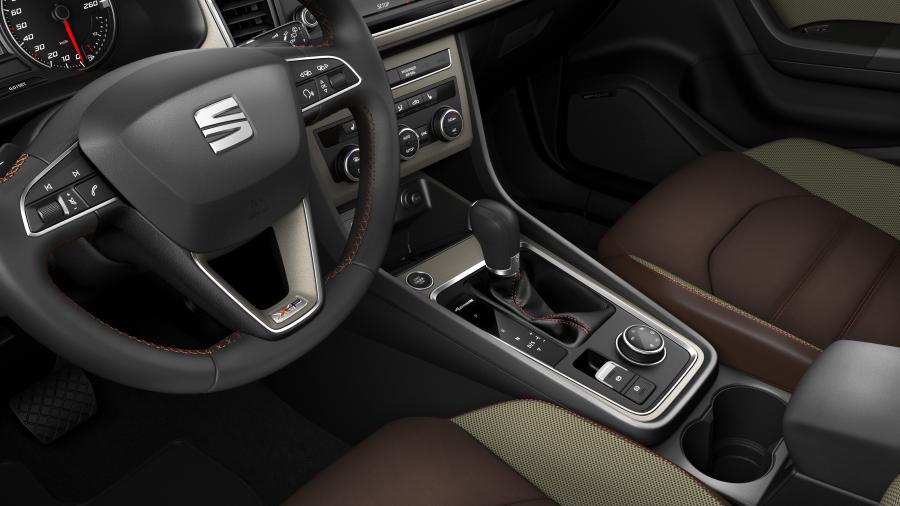 The current SEAT Ateca, comes before SEAT launches 3 new models in 2017, and offers the ordinary customer everything that he or she needs. It is perfectly capable of satisfying the off-road needs of the majority of drivers. Some Ateca customers are without a doubt trendsetters, with a young and restless spirit, looking for a vehicle that suits their lifestyle. For all of them, the X-Perience tries to show that it’s possible to go beyond the limits, that it’s possible to enjoy a more adventurous Ateca: Created in Barcelona.

Syphon
Think they would have done much better showing a concept Ateca Cupra as had been rumoured in the motoring press.

Hi. Not sure that's going to happen - certainly not in the short to medium term, if at all. FR trim would be likely, but Cupra, we're not so sure.

Think they will be missing a trick if they don't, there have been a few articles about a potential Cupra in the euro motoring press. They need to develop the Cupra brand outside of the Leon and Ibiza to move the Ateca into other markets. At the very least, they need a TSI petrol with DSG and 4 Drive in the U.K., our local dealer have several people waiting for a petrol with auto or four wheel drive.