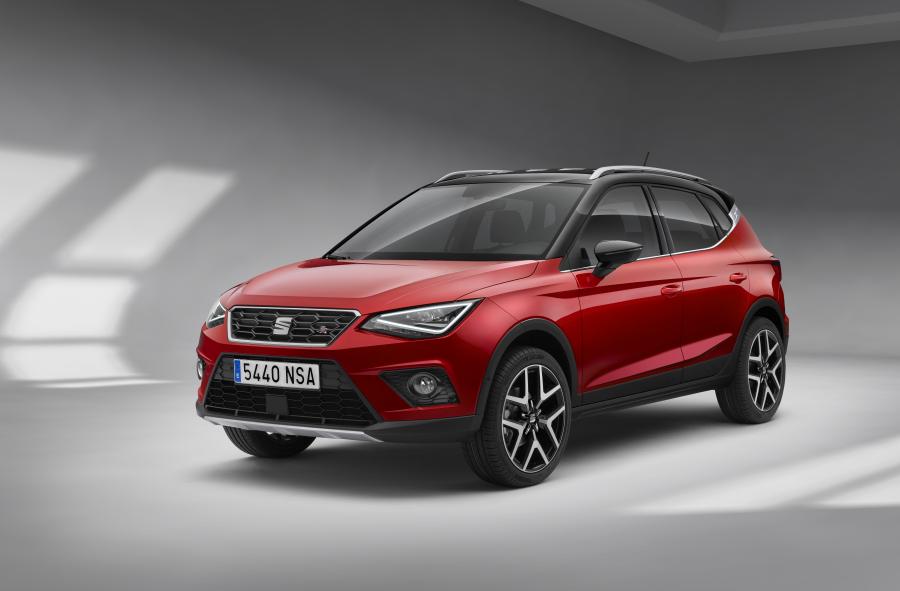 The New SEAT Arona is the Spanish brand’s third new release in 2017, after the upgraded Leon and the New Ibiza. This is yet another addition to the SEAT range in its biggest product offensive ever, which also includes the Ateca and the upcoming large size SUV that will be released in 2018. 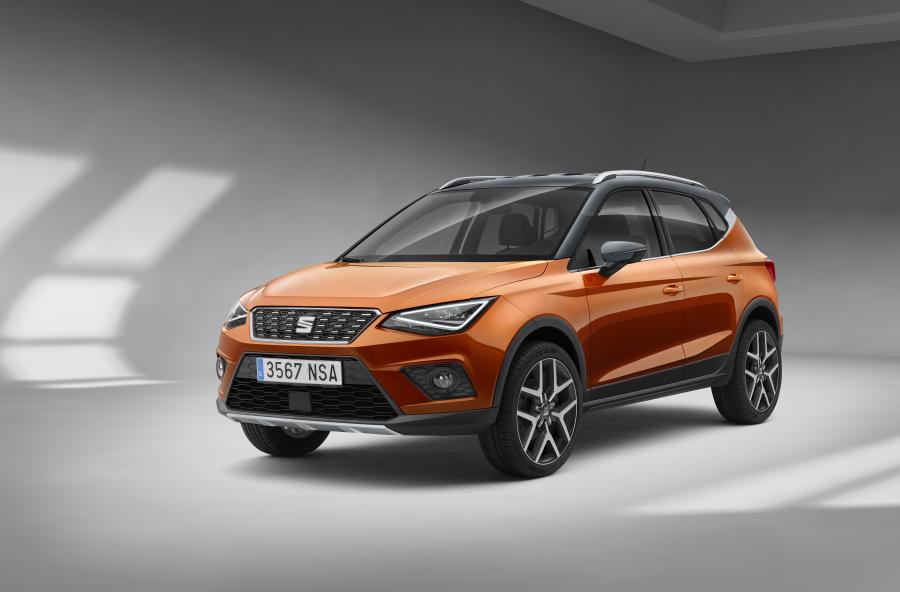 The New SEAT Arona sits neatly within the SUV range as the younger brother in the family, combining the advantages of its compact dimensions in the city, with its crossover attributes once it is out of the city limits. It’s also the fact that the SEAT Arona is so elegant, spacious, practical and comfortable, both in the normal Monday to Friday working week and adventurous, robust, sporty and efficient at the weekend. All of this combined with applied safety and connectivity technology that is only seen in higher market segments, plus SEAT’s undoubtable attractive and distinct design, as well as with the sports DNA dynamism and finesse of the Spanish brand. The Arona, manufactured exclusively in Martorell – the plant with the largest production volume in Spain – will play a key role for SEAT, strengthening the brand and increasing sales. 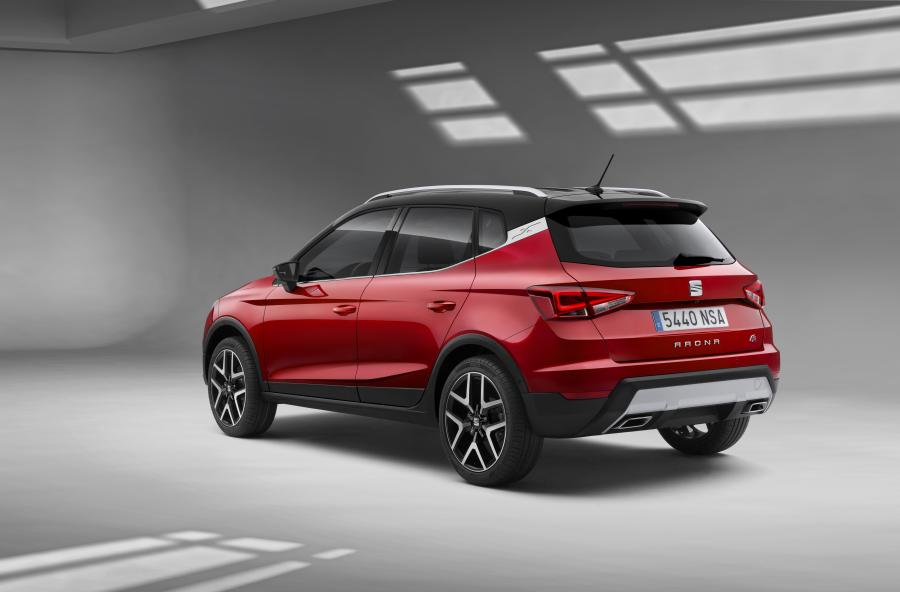 “We at SEAT are very persistent. With our biggest product offensive, by the time the Large SUV reaches the market, SEAT will have launched, on average, a new vehicle every six months in two and a half years. SEAT has allocated a total of 900 million euros in investments and R&D expenditure to the Ibiza and Arona. These investments are a part of the total investment of 3.3 billion euros for the 2015-2019 period”, says Luca de Meo, President of SEAT. “The commercial launch of the New Ibiza is taking place this very month, and Arona will be premiered at the Frankfurt Motorshow”. 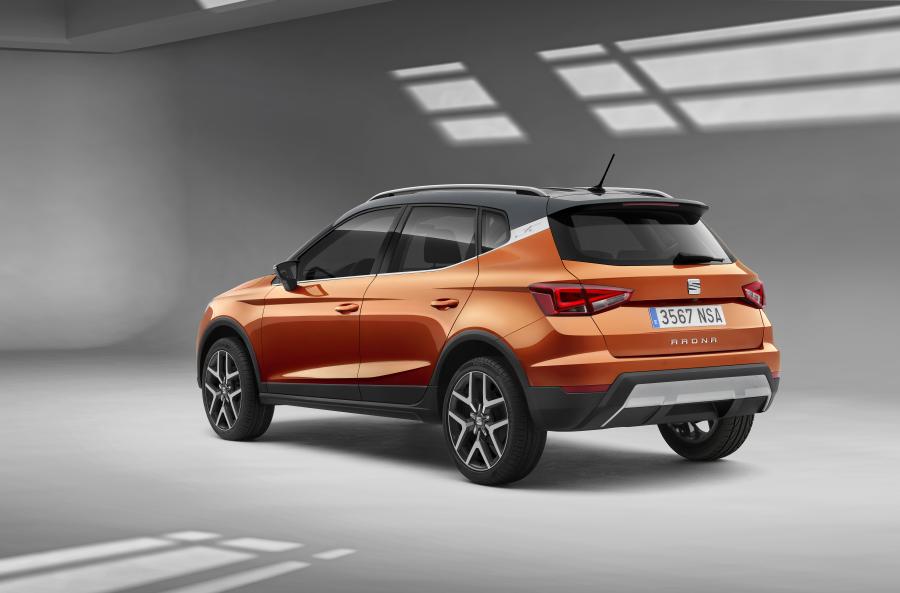 The New SEAT Arona is the first SEAT model in the compact crossover segment, which has increased four-fold since 2015. Far from confining itself to a specific category, the Arona is a lesson in versatility. Thanks to its compact size and the sensations of safety and control offered by its high driving position and modern design, it is perfect for everyday city driving, but it’s not afraid to show its fun and adventurous side either. 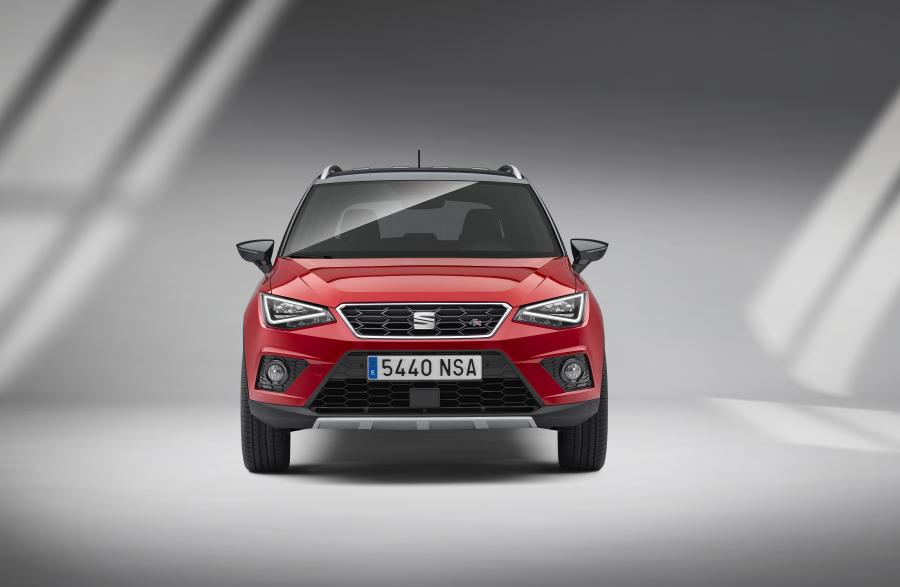 The New SEAT Arona is designed for drivers looking for a sense of excitement, distinction and functionality. People who know that age is just a number, not an outlook on life. This is a car that fits their lifestyle, that works in both the city and the countryside, that is loaded with technology and that is comfortable, spacious, safe, dynamic and all-purpose. It is a car that’s easy to get in and out of, and if that weren’t enough, a car in which your luggage can fit easily with no hassle whatsoever.

Always ready for an adventure

When it comes to passive safety, the New SEAT Arona performs at the highest level in an environment that is much more demanding nowadays. “We’re certain that the New SEAT Arona is the perfect answer to the current demands of our customers, in terms of dynamic behaviour, comfort, safety and state-of-the-art technology. We are once again setting new standards in the segment” says Dr. Matthias Rabe, Executive Vice-President for Research and Development. 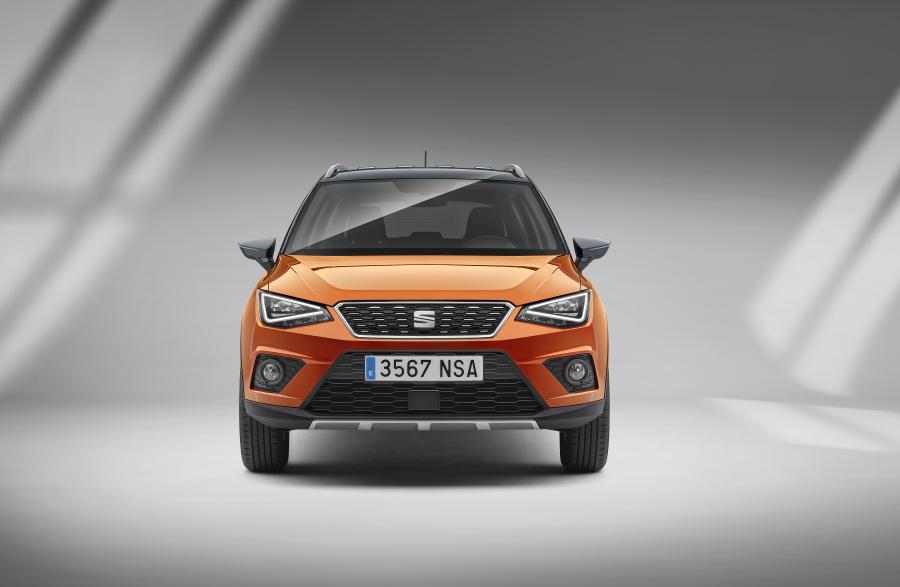 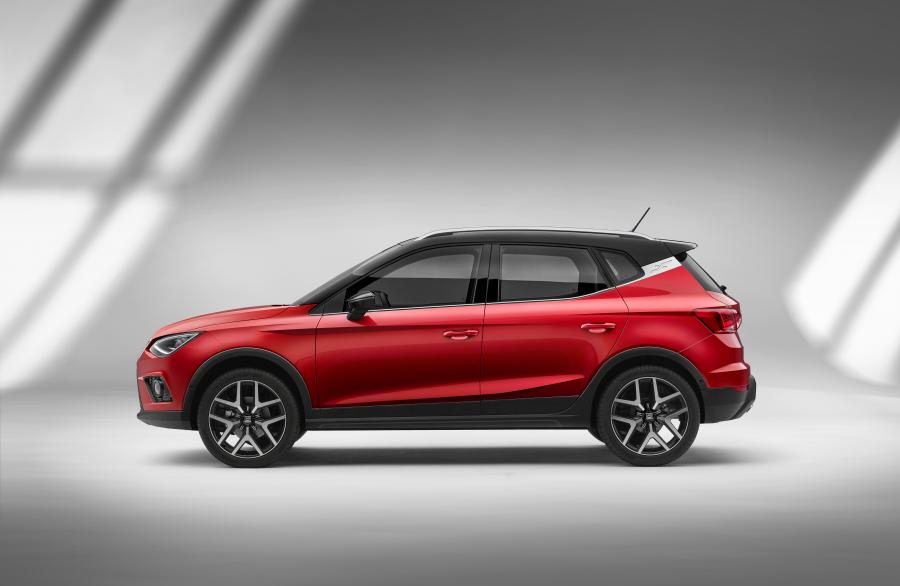 In terms of its dimensions, the SEAT Arona is 4,138mm long, which is 79mm more than the New Ibiza. However, the real difference lies in its height, as the Arona is 99mm taller. As a result, the New SEAT Arona offers not only higher ground clearance for those off-road adventures, but also more front and rear headroom, and, above all, a larger boot, with a 400-litre capacity. Another important feature is the seat cushion, which is 52mm higher and gives it a dual advantage: firstly, a higher driving position for an impressive view of the road ahead; and, secondly, it makes it much easier to get in and out of the car. The passenger seats are also 62mm higher, while headroom is 37mm greater in the front and 33mm in the rear. The suspension has been increased by 15mm and the windscreen is slightly more vertical than in the Ibiza for an even roomier interior. 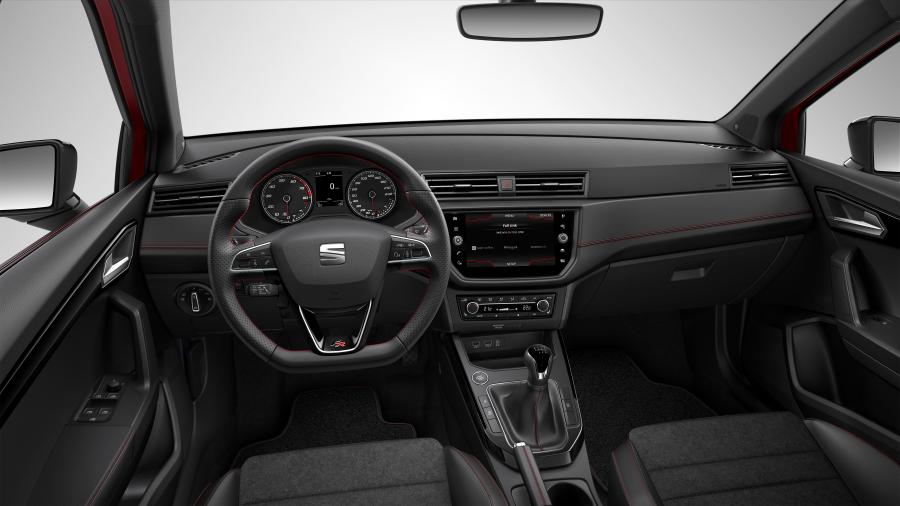 The MQB (Modular Quer Baukasten) A0 platform allows higher manufacturing flexibility, more robust implementation and different models with different body types within the same segment. Also different wheelbase configurations can be achieved within the same base platform. SEAT’s investments and R&D expenditure in recent years were partially allocated to adapt Line 1 at the Martorell factory to the new MQB A0 platform, allowing SEAT to be the first company of the Volkswagen group to use this technology. 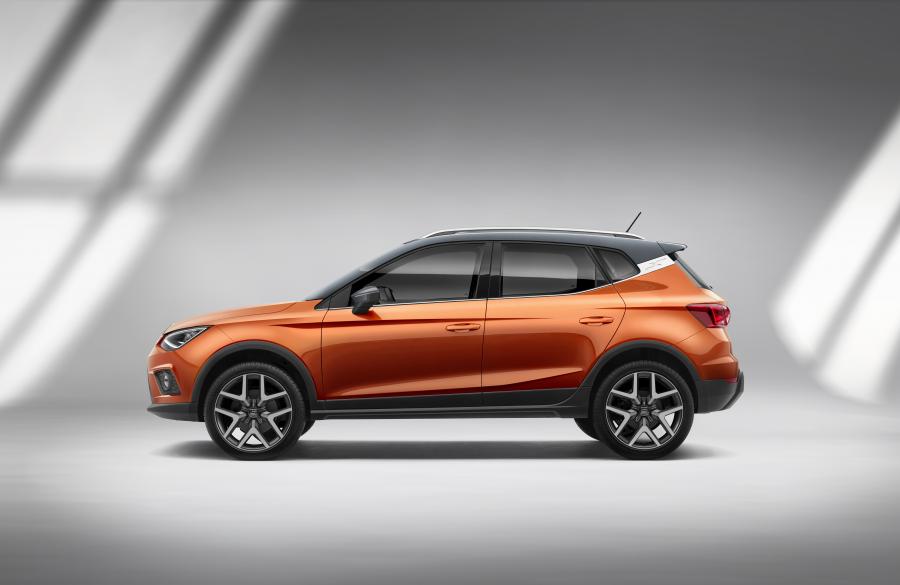 Fully connected and with its own style

Like the Ibiza, Leon and Ateca, the New SEAT Arona will offer the following trim levels (depending on market): Reference, Style, FR & XCELLENCE trims. The dual-coloured (red and white) ambient indoor LED light and dual-zone climate control with an aircare filter are also available on the Arona, while at the front, triangular headlights with attractive colour and excellent luminance make it instantly recognisable. At the rear, its tail lights are also LED and they provide extra visual width thanks to their dual nature. The FR trim includes dual-mode suspension, and the SEAT Drive Profile with four modes: Normal, Sport, Eco and Individual. 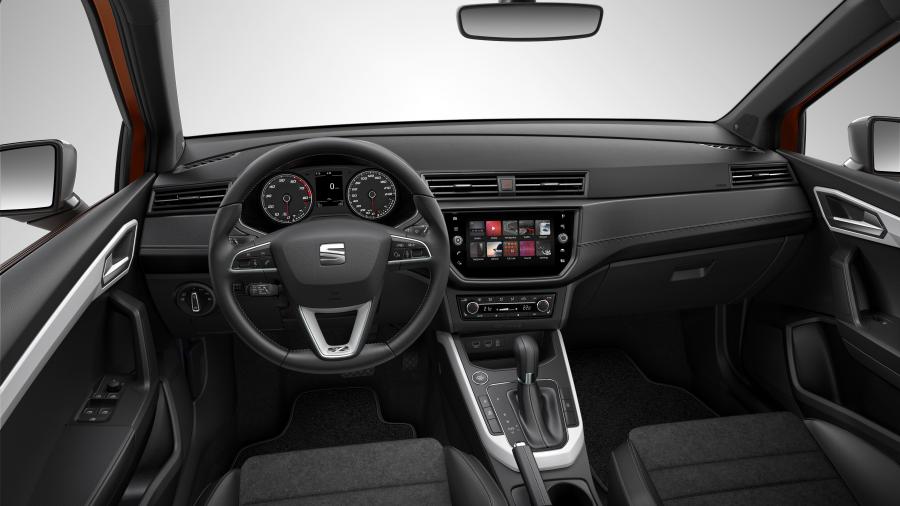 Multi-use without a single compromise

On the emotional side, Arona offers the thrill that drivers once looked for in three-door versions, with the advantage of the space offered by a family car body, and the enhanced capacity made possible by its higher frame. The Arona also shares features with the Ateca. After all, it is its younger brother within the SUV range, as we await the arrival of the family’s biggest member, the large SUV scheduled for 2018. The Arona’s robust front follows the same structure as the Ateca, with a three-dimensional look that’s more pronounced, without being aggressive. Also, the license plate on the tailgate, allows a more robust bumper design and raises the car visually. 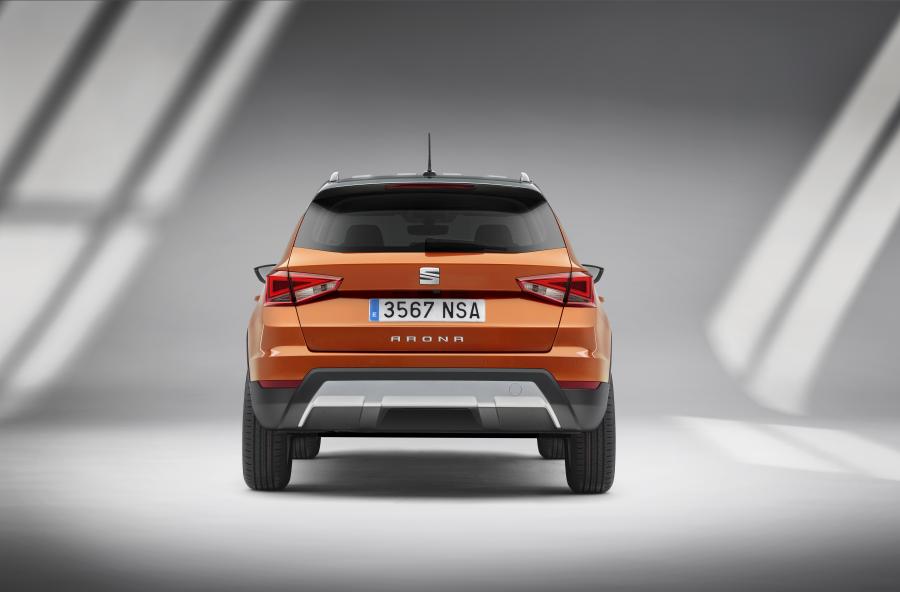 Alejandro Mesonero, Design Director at SEAT, says, “We wanted to give the New SEAT Arona the distinct feel of a crossover, a sturdy car for everyday life, for the urban jungle. That’s why it features such strong protection in the bumpers, the wheel arches and the dark coloured rubber side skirts, as well as the roof rack and the aluminium look-like protection at the bottom of the bumpers”. All of which makes it look tougher and taller. The 665mm larger diameter wheels also help to make the car higher.

The New SEAT Arona is very expressive. In addition to its rack, the roof features evoke the aesthetics of all-terrain vehicles. It has many aspects in common with the new design language shown in recent SEAT cars, although there is no doubt this car has its own personality. This is clear in its interior, which stands out not only in horizontal proportions that emphasise and enhance the car’s size, giving an even greater feel of roominess and space inside, but in its increased sophistication as well. Special care has been taken with the details to underscore the improvements made to the New SEAT Arona in terms of its perceived quality.

The High Console Concept also gives the console more prominence, which affects the safety and ergonomics, since every element is positioned such that the driver barely has to look away from the road while driving. The driver’s seat has been given particular attention, and all of the instruments are oriented toward the driver. Everything is within reach, allowing for easy adjustments and increased safety. The seats are more comfortable and provide a greater feeling of protection while holding the occupants in place more securely. The fabrics, shades and colours are exclusive to the New SEAT Arona, whose interior colours and trims offer many possibilities for personalisation (depending on market), with the console, for example, being painted to match the dashboard.

In this regard, the ability to personalise the Arona is very important. There has been a trend in customers demanding individualisation for their vehicles. Colour-wise, the Arona is divided into two: the lower body, on the one hand, and the roof, plus the A- and C-pillars, on the other. Added to the colour palette for the bodywork is Eclipse Orange. The roof can be grey, black, orange or the same colour as the body. Globally, there are 68 possible colour combinations. Prominent on the C-pillar is the ‘X’ graphic engraved in the sheet metal to highlight the Arona’s crossover look. While every model in the SEAT line-up has a dynamic, versatile, technological and sporty character, the Arona maintains all of those features but has a more spacious interior and a wider range of possible uses. 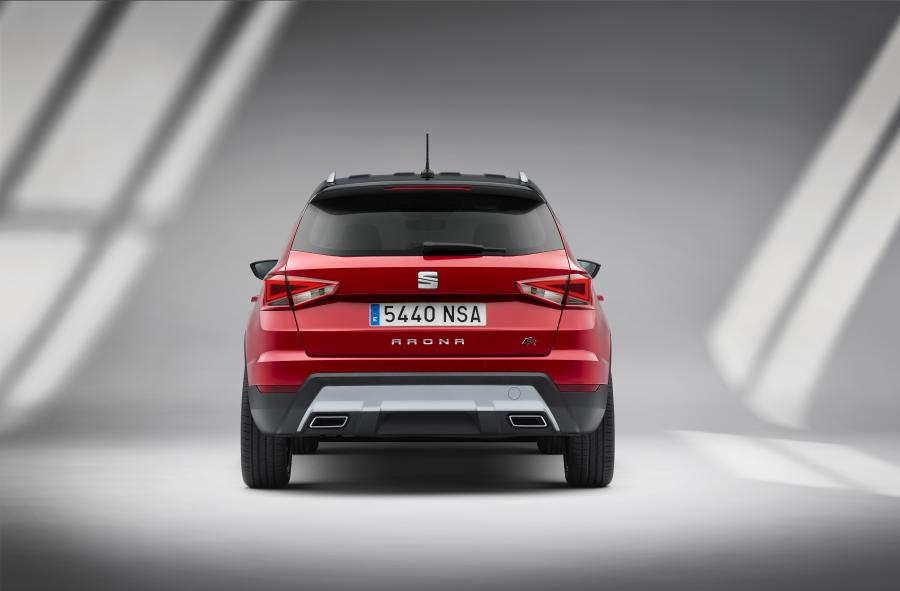 Strength nowadays lies in efficiency and reliability. All of the engines available in the New SEAT Arona range have direct injection, a turbocompressor, and feature an automatic stop & start system. There are three different petrol engines to choose from, all with an aluminium block. The first is the three-cylinder, 95PS 1.0 TSI, which is linked to a five-speed manual gearbox. Next we have this same engine but in a 115PS version, which comes with a six-speed manual gearbox or the dual-clutch seven-speed DSG transmission. The third is the new four-cylinder, 150PS TSI with active cylinder deactivation technology, which is exclusive to the FR trim and is connected to a six-speed manual gearbox.

As for diesel options, the efficient and reliable 1.6 TDI will be available with 95 and 115PS. The 95PS version can be paired with a five-speed manual transmission or seven-speed DSG, and the 115 PS with a six-speed gearbox.

SEAT sales are rising steadily. Between January and May, SEAT delivered 201,300 vehicles worldwide, an increase of 13.9% over the same period in 2016. Sales growth has increased SEAT’s turnover by 20.2% in the first quarter of the year, reaching a record of 2.487 billion euros. Last year, the company posted the highest operating profits in its history. SEAT’s operating profit reached 56 million euros in the first three months of 2017, 4.1% more than in the same period in the previous year.