WOOOooooo HOOooooo
Following reading an article in VW Driver where powerflex bushes were put on a Golf IV project car, and after the advisories i got on my service last week, the devil on my shoulder TOLD me to buy the kit!!!!!
My other half just called AwesomeGTI for me and they have a good deal on them at the mo.... Bloke he spoke to was really helpful.....

Have decided we are going for the self fitting tho..... COULD THIS BE A POISON CHALIS????

have access to a press etc, but has anyone actually done them and got any tips? its MkII Toledo (so Golf IV, Bora) any tips gratefully accepted.....
will post piccies when the kit arrives!

not done the rears, but the front A-arm bushes are quite easy and straight forward. Make quite a difference.

Reminds me I have a few extra that I need to sell off as I don't need them...LOL

What are the benefits of this kit, and what exactly does it do......
Please excuse my ignorance!!!!!!

well basically since the poly bushs flex much less the the OE rubber ones, you'll get much more precise suspension/steering. They also last a bit longer.

They are at home

easter weekend and he is gonna do the deed!!!! (well if it is all plain sailing!)

OMG i am soooo impressed....way faster than i expected and soooo smooth!

Nope.............
4 days give you plenty of time to work on the car!!!
Right this is work in progress. these photos are from yesterday and the first job of fitting new bushes.......BTW big thanks go to my other half and his boss,as he has taken the car into work and she is in bits in the workshop!

Ok so the two bushes each side on the wishbone at the front are, as prc states and according to Ste, quite easy to do......a dream of a job....also confirming that on of the back two bushes was torn! they came out easily and replacement was equally smooth....the fronts were installed the bolt all torqued up by just after lunch (he started at 8am).

Now for the rears......A guy at Awesome with a TT thet he had changed the rear bushes on, warned that it was a b*t$h of a job................... SO TRUE.
again i can only report what i have been told, but, my rears were badly torn (hence bad tyre wear, and we suspect the knocking noise when i go over bumps that has not been totally cured by the eibach kit!). There was a lot of play and the metal center part of the bush just fell straight out!!!
the job is a b&t$h because the whole back axle has come off, brakes disconnected to get at the little B&^%$"ds who's edges are so stuck to the holes they sit in that MAJOR fitting was required (i was informed this means smack the hell out of it!!!!) up to last night one and 3/4 of the two rear bushes were out.......Just dropped him off to continue and expect the job will be done for just after lunch.............then he is going to move on to Drive belt and water pump!!!!

All i can say is its a good job he likes working on cars for a hobby!!! and i can see why it is nearly £500 in labour at a garage!
will up date progress later!

... The last third of the rear axle bush came out after some thrashing but didnt take long, installation of new bushes took about half an hour and they were a very tight fit so plenty of copper slip required

With help from a collegue the rear axle was offered up the car and installed relatively easily, just a bit of jigging to get the bolt holes to line up as the new Powerflex bushes were slightly wider. 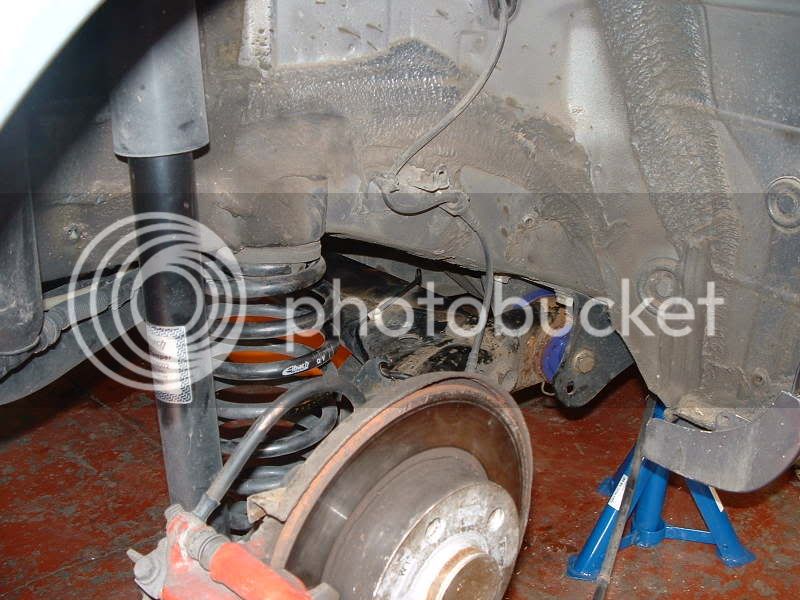 All suspension reattached and the brakes re-connected and bled, wheels on and all done! Moved on to cambelt and water pump (see the intermittant clicking thread) and finished. It took a day and a half to change the bushes and the knocking over bumps from the rear has been completely cured!

After major surgery! (excuse the dirtyness)

I hate changing bushes, did them on my old BMW last year.
Won't be doing it to the LCR!

great stuff. Can you feel any difference from the rear change? I've only done the fronts and am debating doing the rears as well.

I think I'd try the Chip Foose bush removal technique, set it on fire and melt it out!

prc said:
great stuff. Can you feel any difference from the rear change? I've only done the fronts and am debating doing the rears as well.
Click to expand...

Very much so.......there is no movement from the rear end at all.......give great confidence in corners now!!!!
the old ones were so badly ripped that knocking and instability was so noticable before.......

.can "feel" the road more (not in an uncomfortable bumpy way) just a more responsive way! the knocking noise that i had from the rear is cured, and just that would make it well worth it.

I had my front bushes done about two weeks ago by Star Performance with Powerflex bushes. The car is actually amazingly more responsive. You know how you hear people raving about upgrades they have done, well I always treat them with a little bit of suspicion because I know ppl want to believe they have not wasted their money. Well this is actually one thing Ive done and there IS a difference.

Thanks for the info.
I will probably do it when swapping shocks/dampers (again). On that rear thump you have, have you tried swapping the upper rear top mounts? On my car they tend to go every 60-70k.

No didnt change upper rear mounts.........but it has gone now.....but thanks for that for future reference if the noise returns again

thanks for this link "sam20v"
i did seach, but i searched leon forums, so i missed this

Sam20v said:
All i can say is its a good job he likes working on cars for a hobby!!! and i can see why it is nearly £500 in labour at a garage!
will up date progress later!
Click to expand...

So it's about now I am really looking forward to having this work done. I don't have access to a press and therefore won't be doing it myself!!

Is this all down to rear bushes?

Hey it could be.
Rear bushes are a very common problem on all VAG
As has been said though , we do the Powerlex bushes at a reduced price tto.
We have just had a big delivery of them too.
Sarah

StuC said:
So it's about now I am really looking forward to having this work done. I don't have access to a press and therefore won't be doing it myself!!

Is this all down to rear bushes?
Click to expand...

hi mate......as Sarah said it could be the bushes causing your probs....
i found trouble not just in corners....... it felt like a boat swaying around on the motorway too.
During the last service before changing the bushes i was advised that mine were split and torn. have you had it serviced recently? did they say anything?

Yup, I have the motorway 'rowing boat' feeling too.

Yeah I have had it recently and they advised me that they will need doing before the next service. However they also said the same about the pads and discs. Which still have life left in them!

i had the complete front kit fitted after sam20v's advice and i am really really pleased with the results.

got the parts from awesome, had them fitted at my mates garage (press is handy) and couldnt belive the improvement.

as said above, i too always treat reviews where people rant on about how good something is with a bit of a pinch of salt, but these bushes have made a brlliant difference.

would advise anyone else to do this every time.