Update: This is a historical article – the new Cupra has been revealed and we have the details here.

SEATCupra.net speculates on the new MK3 Leon Cupra. What are we most likely to see based on previous models and what have SEAT disclosed already about the forthcoming new car.  Syphon who himself is a Mk2 Leon Cupra owner not to mention dedicated aficionado of all things SEAT has taken a look into what we might expect to see when the Mk3 Leon Cupra finally appears. What do you think? How accurate do you think we are?  You can always tell us your thoughts on our forum. 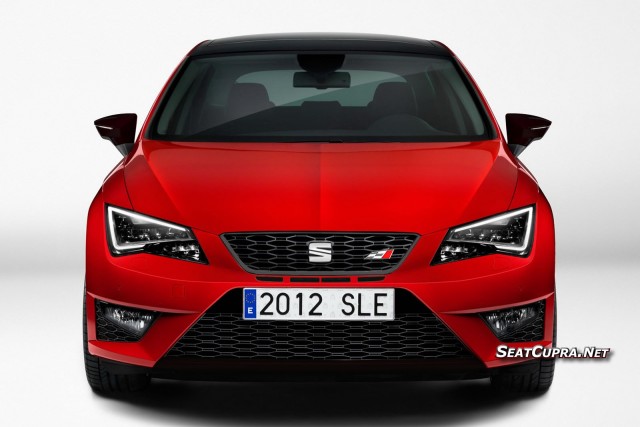 SEATCupra.net would not of been named as such if there were not a healthy enthusiasm for the performance end of SEAT’s product portfolio. While we have an interest in all things SEAT, the underlying fact is we do tend to crave over the Cupra models and they inevitably generate the most interest on our discussion forums.

The Cupra and Cupra R have become synonymous with the achievements of SEAT’s in-house motor sport division SEAT Sport who still continue to build and develop touring cars for customer race teams across the globe, despite not having an active factory race team of their own at this time.  Defined by aggressive yet dynamic styling, high performance engines, larger brakes and wheels plus features and trim unique to the Cupra, which are of course all finished with the CUPRA chequered flag badge detailing.

Those of us with an affection for the Cupra models have become used to waiting with anticipation for a year or more, hypothesising how SEAT will develop upon the striking new designs of the regular range, before the “monster editions” are revealed.

Historically the Sport or FR model comes first, often alongside or soon after the standard range, but we must usually wait over a year for the Cupra models appearance.

However, recently SEAT have restructured their product offerings and the FR has now become a trim level available across a range of engines, instead of representing just one model of Leon.  This change made good sense for SEAT, allowing a sportier trim to be applied to less powerful, more economical engines broadening the appeal of the marque to buyers who prefer the slightly edgier sporty design and features that go with them yet with economic running costs..

The Cupra now sits below the R brand, and the R will as with the outgoing Mk2 be a special run out model, after the usual facelift mid-life of course.

So it is with great anticipation we wait for the first glimpse of a new chapter in performance SEAT motoring with the MK3 Leon Cupra.

This small feature is to look into what we currently know about the car and to add some healthy speculation for good measure.

One thing we do know for sure is that there will be a Leon Cupra, well to be accurate there will in fact be three.  We should at least see one of these models by the end of the year, the next major international motor show is this September at Frankfurt, but the Barcelona motor show also takes place in May and SEAT may use a domestic show to promote a new model too. As we have said it will be available as a choice of three body styles with the 5 door and recently introduced 3 door SC (Sport Coupé) initially expected to be first out of the starting blocks.  They will be followed by an ST (Sport Touring) estate version in due course, once this new model itself has launched. 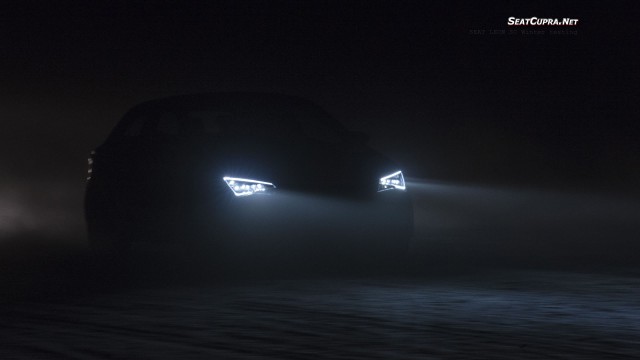 We do not have access to any market research, but from our own personal experience as SEAT owners and from the opinions and observations of our busy discussion forums we find we have a unique point of view when analysing and debating the direction of SEAT’s products.  We have also be exceedingly lucky to experience first hand the marketing direction of the company and reviewed some of their latest products often before they arrive with UK dealerships.

The styling of SEAT’s are one of the most attractive features, their free spirited Mediterranean origins set them apart from many other brands, their state of the art dedicated design centre has turned out some bold designs by some of the worlds best automotive designers, who’s visions are often ahead of the curve and attract high praise and sometimes a little derision too.  But they do get people talking, and in the UK at least this popularity has seen sales figures increase year on year.

SEAT currently market themselves on their own Spanish origins alongside the engineering prowess of their German parent company VW/Audi. A banner under which they now proudly announce as ENJOYNEERING. While the partnership with VAG has been incredibly beneficial to SEAT over the last 30 years, the company has struggled with its direction in terms of product development.  Under the current management of James Muir, the company has raised its game in terms of quality and concentrated on offering a wide choice of products to attract more buyers.  The new Leon itself is the big test of this new strategy, historically the Leon has been only available as a 5 door hatch back, the introduction of a 3 door for the first time and later an estate version is SEAT’s plan to offer a wider choice to the buyer.

Many leading motoring journalists have already commented that the MK3 Leon stands out as an attractive and exciting alternative to even SEAT’s own parent groups premier models. The latest Audi A3 and the new Golf MK7 have not really changed much from their previous generations at least visually, and their engineering enhancements are shared with the Leon too. The Leon stands out as an attractive marque with its edgy dynamic lines and now in the new SC body style, sporty and sleek coupé like proportions too!

So with the recently released mainstream models already creating a stir of interest, what should we expect from an all new MK3 Leon Cupra?

In recent times the Cupra and R models of SEATs range have been defined with a number of key features that differentiate them from the FR models that precede them. This does not apply in every case, but you should hopefully see our point.  Please note that we are referring to UK spec cars.

We can be fairly confident that some of the common Cupra features listed above will remain, although some elements may become optional extras to reduce overall costs.  The most recent Cupra model to hit the market has been the face lifted Ibiza Cupra.  We can look on this new model too, for some clear hints to the features and details of the new Leon Cupra.

While its fairly easy to point to previous models for hints, we have also seen a few clear hints from spy pictures that have circulated around the internet, one such image showed recently a test prototype commonly referred to as a mule running a dual exit exhaust system with bigger brakes and sitting on a set of MK2 Leon Cupra R wheels. (photo courtesy of Autocar). 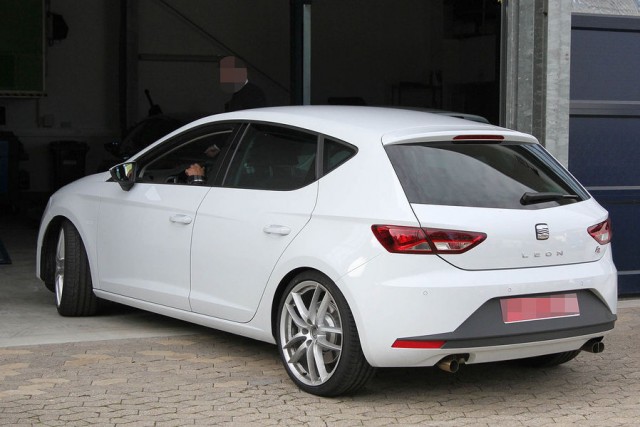 With tongue firmly in cheek we recently asked SEAT’s press team via Twitter if our vision of the next Leon Cupra was accurate or not. As you would expect they could neither confirm or deny.

This would on the surface appear to be yet another Cupra prototype. One that SEAT have not made great efforts to hide particularly well. Either that or someone has bought an FR, managed to re-trim the seats, fit a new exhaust and decided to remove the FR badge, an unlikely scenario!

Syphon was fortunate enough to be able to have a conversation with one of SEAT’s senior engineers, during the Malaga press launch for the 5 door Leon in November last year.

He explained that he had driven and was actively working on the Cupra prototypes.  He revealed that the mule was running just under 300HP but that it was expected to be toned down for its retal launch.  SEAT have indicated it will be at least as powerful as the outgoing Leon Cupra R.  It is expected to be fitted with a newly revised and more efficient 2.0T, which will soon make its debut in the new Audi S3.  At present we estimate the incoming Cupra horsepower will be marked at around 265HP, but could even peak as high the 280HP mark as standard.  Either way the lower weight advantage that the MK3 has over the previous MK2 should see an improved power to weight ratio, which will help improve handling characteristics.

As Syphon discovered when he drove MK3 last year, the standard range and FR trim are set up to handle the twists and turns as well as being sympathetic to our bumpier British roads.  The MK2 FR pre facelift was known to be particularly harsh and SEAT recognised that the MK2 platform could have been a lot better in this regard. They have actively sought to remedy this shortcoming in the MK3, which Syphon expressed in his test that they have successfully achieved.  Though it should be expected that the Cupra with its stiffer ride and lowered suspension plus characteristic low-profile tyres will have an effect on the overall ride.  SEAT do however believe they will fine tune the new Cupra to make it a satisfying sporty drive, whilst providing a good level of ride comfort.

The car will feature the currently FR exclusive functions such as the driving mode system (ECO, Normal, Sport).  We demonstrated this in a video below.

We can expect the usual black interior trim and sportier seats inside.  All being well we should see the Cupra supplied as standard with the new infotainment technology pack, which includes the striking full LED headlights which are a first in the cars segment, also the safety features such as lane assist and tiredness monitor could become standard fit items.

Expect a tuned exhaust note, known as the SEAT Sound System, tuned by the motorsport experts at SEAT Sport. Those who have heard the mule in action expressed to Syphon that it sounded awesome.

We believe at an entry level price point SEAT should be aiming at the £23-24K mark in the UK. However SEAT now have an option driven pricing structure, which means a lot of the features could become pricier options so as to keep the entry price point lower.

An example being the current range topping FR 5 door with the new 1.8TSI power plant supplied with a 6 speed manual gearbox currently retails at just over £20k. A 7 speed DSG model will bump that up an extra £1000 or so.  Before you add extras such as trim and styling options, an FR can easily reach the £25k range.  SEAT are presently running a promotion to fit the technology pack for £500 instead of the usual price of over a £1000.  This includes the LED headlights, Navigation and DAB radio.

SEAT UK’s MD has hinted that to remain competitive compared to cars like the Focus ST that SEAT would be looking to include options as standard with the car, so hopefully we’ll see the Technology pack included in the price on the Cupra at a very minimum.

However taking all these facts into account and its not beyond the realms of imagination that a new Leon Cupra could be expected to top out in the realms of £26-£27k or even more which means it really needs to be something very special indeed to influence its potential buyers.

What we have shared above is pretty much all that we currently know at the present time and can openly speculate upon.  What is for sure, SEATCupra.net will aim to bring you up-to-date information on the car as soon as we get it.

Let us know what your hoping to see, by joining the discussion.

A big thanks to Zboyd who helped with writing this article.