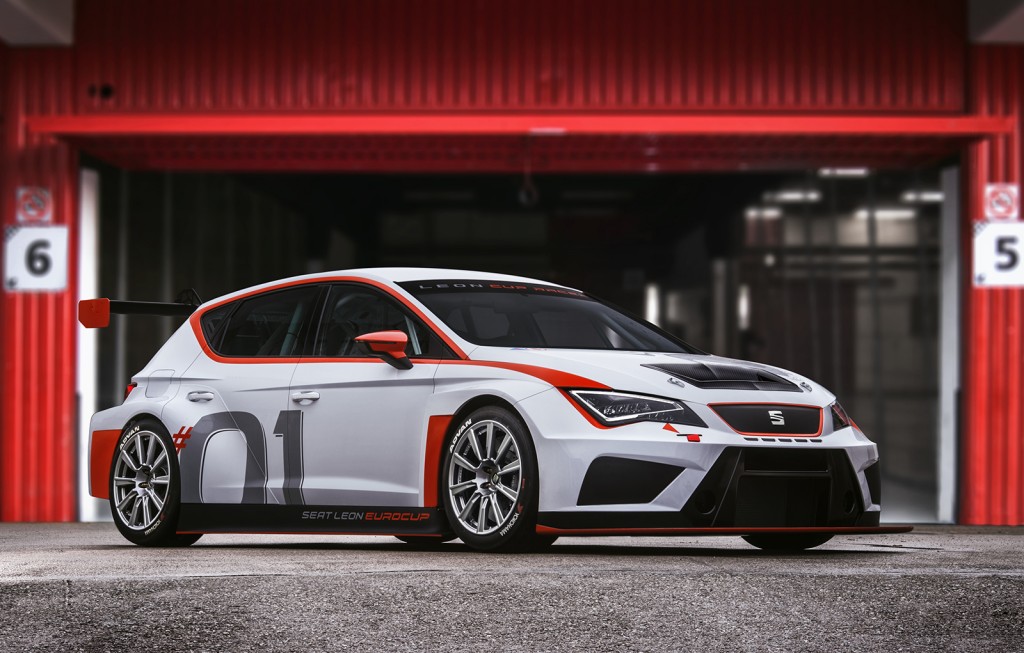 SEAT is continuing its intense and long-standing commitment to motorsport as it prepares for the 2016 season of the SEAT Leon Eurocup to take to some of the continent’s most fascinating race tracks. Two sprint races will be held on each of seven race weekends in six European countries.

On the starting line is the SEAT Leon CUP RACER, a top-flight motorsport machine with 330 PS and state-of-the-art technology. It is already one of the most successful racing touring cars on the circuit right now, with more than 100 of them currently used across a diverse array of racing series by teams from 22 countries – with great success, including in the new TCR International Series. The CUP RACER has been further developed in many details for the new season – for even faster and more thrilling motorsport. New for this season is a second version of the CUP RACER TCR. With a sequential transmission instead of the DSG, it is specifically configured for endurance racing and all TCR championships.

“Customer sport is incredibly important to us. The CUP RACER has been an exceptionally high-performance and successful race car from day one. Nevertheless, we have systematically developed it for this season to make it even faster. And with the TCR version, we are now also offering a vehicle optimised for endurance racing,” says Dr. Matthias Rabe, Vice President of SEAT S.A. for Research and Development. “We are looking forward to the new season. Seeing and hearing the enthusiastic SEAT fans at the track is always a fantastic experience. And we will once again be offering them some amazing and thrilling racing.”

The SEAT Leon Eurocup is equally successful, counting among the most attractive single-brand trophy series in Europe. In this, its third year, the starting slots have once again been booked out for a considerable time. The 2016 race calendar comprises seven dates on Europe’s best race tracks:

The weekends are packed with a wide assortment of training sessions and two sprint races. A service team from SEAT Sport will be on hand on race weekends to provide technical support to the private customer teams.

Successful in the TCR International Series, too

But the Leon CUP RACER is not only successful in the Eurocup. A SEAT customer team was able to win through against tough competition in the new, highly attractive TCR touring car series, run for the first time in 2015. Swiss driver Stefano Comini took the series title in a Leon CUP RACER.

The TCR International Series will run again in 2016, with 24 races over twelve weekends on three continents – Europe, Asia and South America. Once more, three of its race weekends will be included in the Formula 1 programme. The calendar includes stops in Malaysia, Russia, Argentina and SEAT’s Spanish homeland.

Despite its thoroughbred racing technology, the Leon CUP RACER is a close relative of the Leon CUPRA. Alongside its characteristic design, the Leon bodyshell offers maximum stiffness combined with low weight – both crucial for fast driving and precision handling on the race track. The CUP RACER’s 2.0 TSI powertrain with 330 PS and a maximum torque of 400 Nm is also a close relative of the production engine in the Leon CUPRA, with the DSG transmission and the electronically controlled front axle differential lock likewise originating from the top road-going Leon model.

Many details of the Leon CUP RACER have been carefully developed for the 2016 season by SEAT Sport. The Eurocup version benefits from improved drag and downforce thanks to the new aerodynamic package, giving it more speed on the straights an in bends. The cooling package and the redesigned exhaust system deliver better performance, while the new shock absorbers can be adjusted in both directions, enabling the racer to be more precisely adapted to the respective track and driving style. Finally, a new safety tank is on offer with a capacity 100 litres and rapid refuelling system – a hugely helpful feature, particularly for endurance racing.

The CUP RACER version for the TCR International Series receives a new, lighter and more individually adaptable transmission as well as a robust and lighter brake system. As of the 2016 season, SEAT Sport is offering a second version of the CUP RACER, configured specifically for TCR and endurance racing – e.g. on the Nürburgring in Germany. The most important change is a sequential-shifting, six-speed racing gearbox from SADEV, which is operated via shift paddles mounted on the steering wheel instead of the classic gearstick. This endurance package still includes a robust mechanical differential lock up front and the six-piston Radi-CAL brake system from AP.

The drivers compete in the SEAT Leon Cup Racer, which captures the innovative spirit of SEAT, combining a striking design and a powerful engine. The image of the SEAT Leon Cup Racer displays all its power at first glance yet the DNA of the Leon family design remains intact. Although it has been developed from scratch by the SEAT Sport team as a race car, the Cup Racer is closely related to the SEAT Leon CUPRA, the brands most powerful model in terms of sports performance and driving pleasure.

Since 1970, the Spanish brand has built a rich automotive heritage, winning two World Touring Car Championships (2008 and 2009) and three titles in the World Rally Championship two litre category (1996-1998), in addition to organizing successful single-brand competitions around the world. Through other international and regional programs, SEAT Sport has also won over 25 rally and touring car titles.