SEAT has chosen the Paris Motor Show as the backdrop to reveal the details of the biggest product offensive in its history. Following the Ateca, the brand will update the Leon in 2017, launch the fifth generation Ibiza and conclude the offensive by making its debut in the crossover segment with the new SEAT Arona, a designation that was also unveiled today. Arona is the name of a city on the island of Tenerife, in the Canary Islands, as well as a place in the Italy’s Piedmont region. The new SEAT Arona will be developed and manufactured in SEAT’s Martorell factory in Barcelona.

SEAT President Luca de Meo explained that “the Leon, the Ibiza and the new Arona, together with the Ateca, are going to strengthen SEAT from a commercial, financial and brand image standpoint. 2017 is going to be a very special year for SEAT”.

The company is showcasing the new Ateca X-Perience in Paris and it will be, together with the Ateca, the centre piece from today until next 16 October. The Ateca X-Perience is a more adventurous, off-road version of SEAT’s first ever SUV, which by now has become the company’s third pillar. In the first few months following its launch it has accumulated over 21,000 orders, more than 39 million web visits and 1.5 million configurations via the Internet. The Ateca X-Perience, inspired by the Mediterranean culture, shows its most adventurous, off-road side and is an exercise that demonstrates the possibilities of the Ateca family and its future potential. 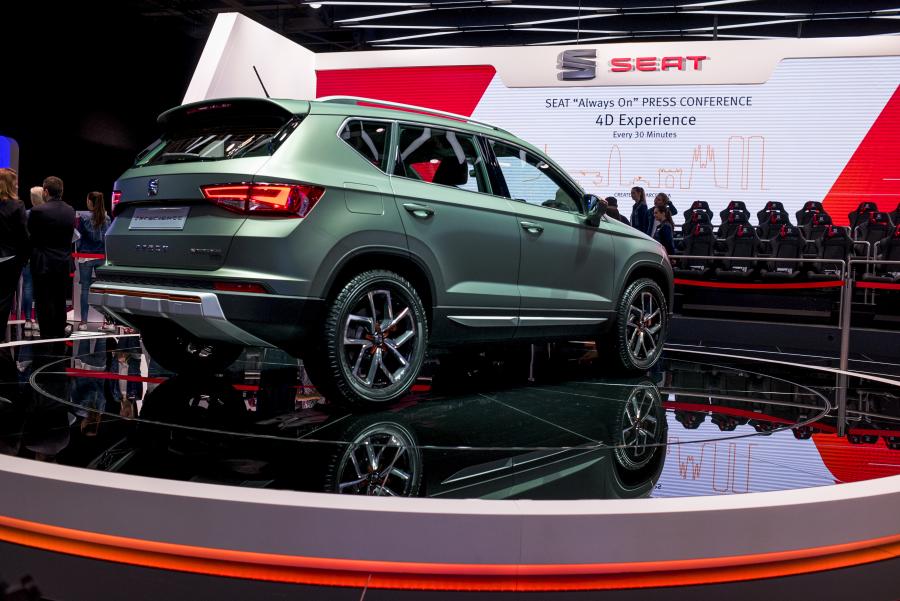 The SEAT stand, a 4D experience to live the brand

The Paris Motor Show is the ideal setting for SEAT to reveal its vision of the company, with the connected car as the key to future mobility. And for the occasion, the unique staging of an innovative double stand concept is different from anything seen until now at any motor show event and has been designed around 4D experiences that enable visitors to live and feel the brand and the city of Barcelona. In line with the growing role that is being played by digitisation in the company’s corporate strategy, the slogan “SEAT Always ON!” serves as inspiration for how the brand is staging its image in Paris. The stand features a 4D amphitheatre with a non-stop press conference as well as a car configurator that uses BitBrain technology to customise the SEAT Ateca according to visitors’ emotions and neurological input.

The outdoor area of the stand features a press room, a chill out zone and a place for socialising, among others, so that visitors can live and experience the brand. The Created in Barcelona concept will also shine a light on the city to highlight its modernity and its role as an international benchmark of urban design, all values shared by SEAT.

SEAT, ready to take things to the next level

In the next ten years, the automotive sector will experience a revolution with innovations in electrification, digitisation, new mobility services and connected cars. To respond to these challenges, SEAT has set up an Easy Mobility Team, a transversal crew that is set to lead the company’s transformation in terms of three main working areas: digitisation and R&D, customer experience and business development.

“The connected car at the core of the user experience is our vision of the future of mobility. We want to position the car as a service that offers a digital, connected experience”, underscored Luca de Meo. “Bringing SEAT to the next level means not only working hard to continue delivering even better products and services to our customer, but also using this revolution in the sector to play, this time, a front runner role in some of these new trends. We dream of making SEAT the brand capable of delivering the easiest mobility experience in this fast changing environment”, he added.

SEAT wants to be a leading brand in the field of connectivity and digitisation. In this sense, for example the company has become the first in the industry on a worldwide level to feature an app that is compatible with CarPlay, which enables the contents of an iPhone to be viewed and managed from the car.

The objective of the second area of work for SEAT is to enhance customers’ purchase experience and all related services. In line with this commitment, the brand launched the SEAT Live Store, a pioneering platform enabling users a close-up, virtual, personalised look at all the details on a car. The company has also reached an agreement with Amazon France to commercialise the Mii by Mango through the online retail giant.

SEAT will also concentrate its efforts on business development, using new mobility ecosystems to respond to the challenges faced by cities in terms of urban infrastructure, traffic systems and vehicles. An example of this commitment is the signed agreement between SEAT and Conector to launch a startup accelerator specialising in the car industry and mobility, as well as the implementation, in Barcelona, of the CARNET urban mobility research centre.

SEAT, strong and poised for its largest product offensive

The company’s digital transformation coincides in time when SEAT is consolidating its financial results and getting ready for its biggest offensive of new models. SEAT is progressing towards sustainable profitability and expects to close 2016 with profits. The company posted a half-yearly 2016 operating profit of 93 million euros, which is 77% more than the same period in 2015. In addition, sales are increasing for the fourth year in a row, with 277,100 vehicles delivered until August. Following the Ateca, SEAT is going to launch three new models in upcoming years – the updated Leon, the fifth generation Ibiza and the new SEAT Arona.

You can enjoy the 4D Experience through the following link: www.seatpms16.com