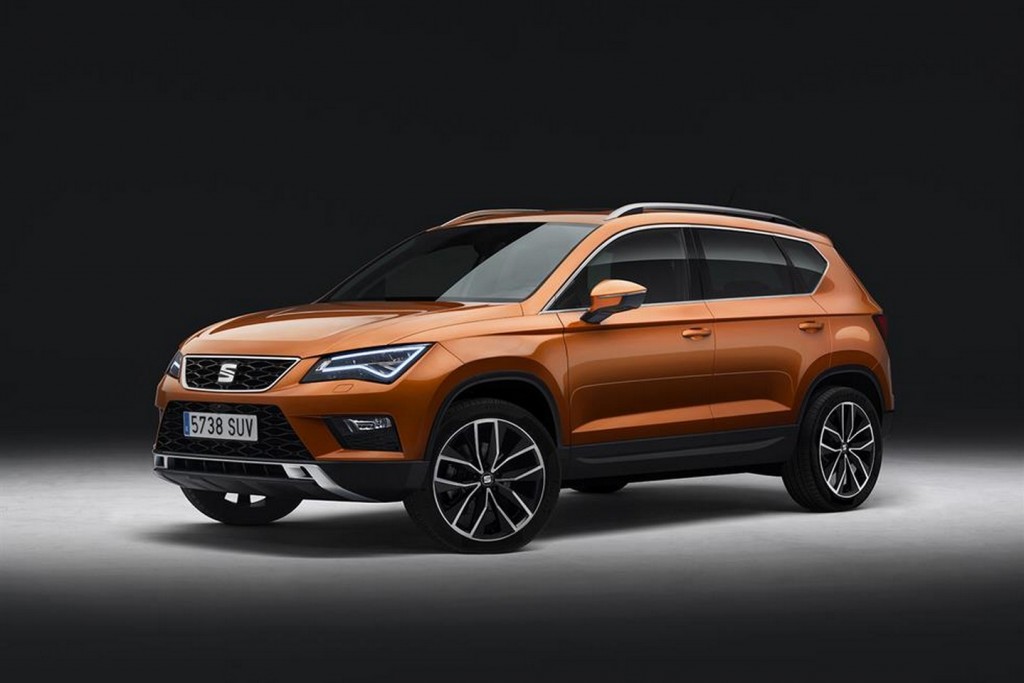 Tonight, SEAT unveiled its first SUV in Barcelona. The new Ateca is a unique combination of distinctive design, dynamic driving fun, urban versatility and compelling utility. First-class connectivity, innovative assistance systems and highly efficient engines are among its technology highlights ensuring Ateca will be one of the most innovative SUVs in the segment. Outstanding quality, precision production and attractive value-for-money combine to make it a true SEAT. Key to its appeal however, is its agile and precise handling – the Ateca makes every day and every mile that little bit more rewarding. 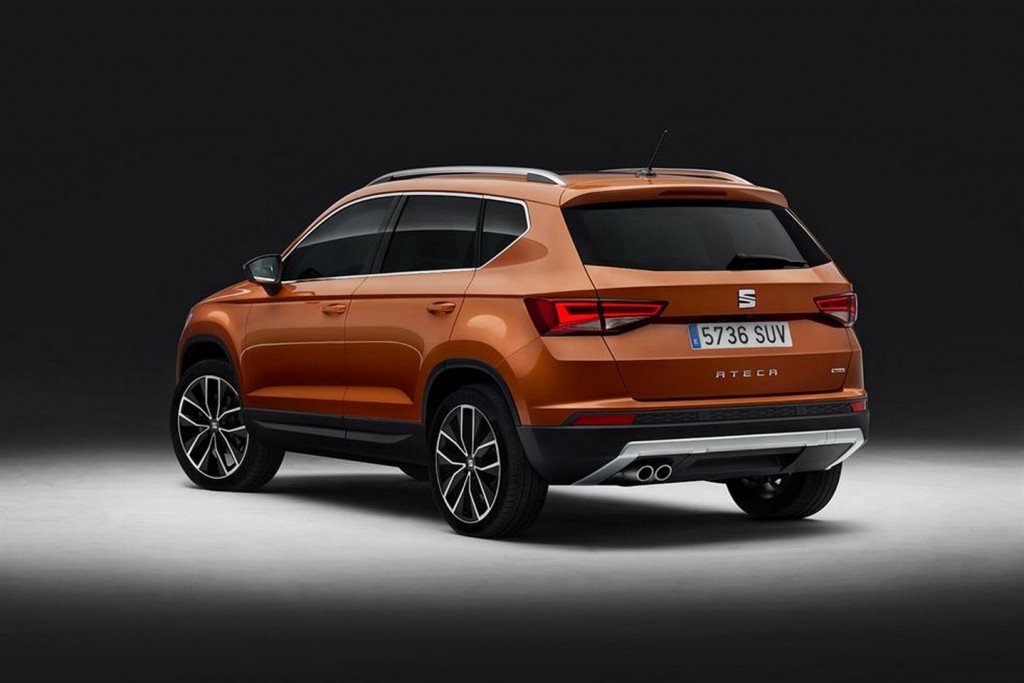 At UK launch this September, Ateca will be available in a wide range of variants. The choice of powerful turbocharged TSI petrol and TDI diesel engines spans from 115 PS to 190 PS, with either front-wheel or all-wheel-drive, mated to manual or dual-clutch DSG transmissions. The extensive array of technology options extends from full-LED headlights through a broad portfolio of assistance systems, including some of the very latest Group technology, such as Traffic Jam Assist and Emergency Assist, right through to a package of high-end  infotainment systems with eight-inch touchscreens and Full Link connectivity. Three trim levels will offer colours and top-quality materials to suit every taste, with the top-of-the-range being the Ateca XCELLENCE.

“We have put together an amazing package of technologies and innovations for the Ateca – delivering more safety and utility but, above all, the most dynamic driving experience possible. We will set a whole new standard within the segment with its light-footed, precise handling,” says Dr. Matthias Rabe, Vice President of SEAT, S.A. responsible for Research and Development.  “It is incredibly fun to drive. And we have combined this driving experience with compelling utility, making the Ateca a hugely versatile companion for an active urban life.” 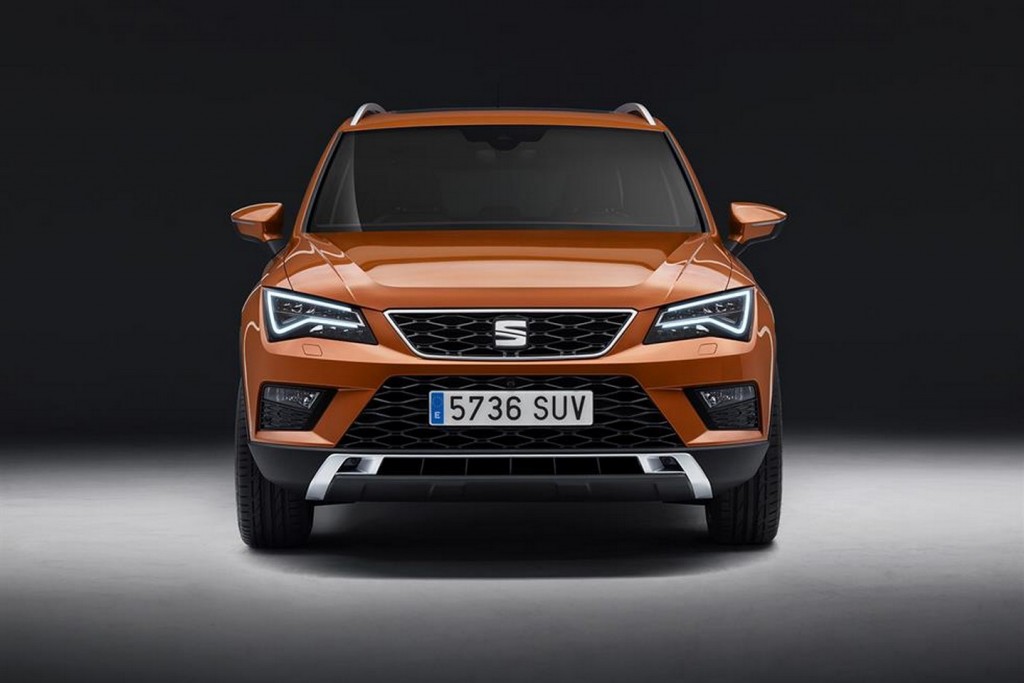 The Ateca’s design is utterly unmistakable. As an SUV, too, the typical SEAT design language is a striking combination of dynamism and functionality. Many elements, like the trapezoidal grille, the side blisters with their sharp creases and the triangular light signatures, are typical of sister models such as the Leon. Yet every single detail has been carefully developed to the next level for the Ateca.

The front end of the Ateca is 100 per cent SEAT and yet 100 per cent SUV. The large, high grille brims with confidence, while the sharply defined lights and substantial air intakes leave no doubt as to the Ateca’s dynamic credentials. At the same time, it maintains a muscular stance that exudes solidity and reliability.

Typical SEAT features include the optional full-LED headlights with their upmarket light colour and excellent luminance. Combined with the triangular signature of the daytime running lights, the overall impact is utterly unmistakable. In the Ateca, the indicator lamps are also an integral part of this signature.

State-of-the-art technology and an emotional experience go hand-in-hand with the SEAT Ateca. One example is the “welcome light”. As soon as you unlock the doors, LEDs in the door mirrors illuminate the area below the doors, like so-called “puddle lighting”, projecting the Ateca’s name onto the ground. 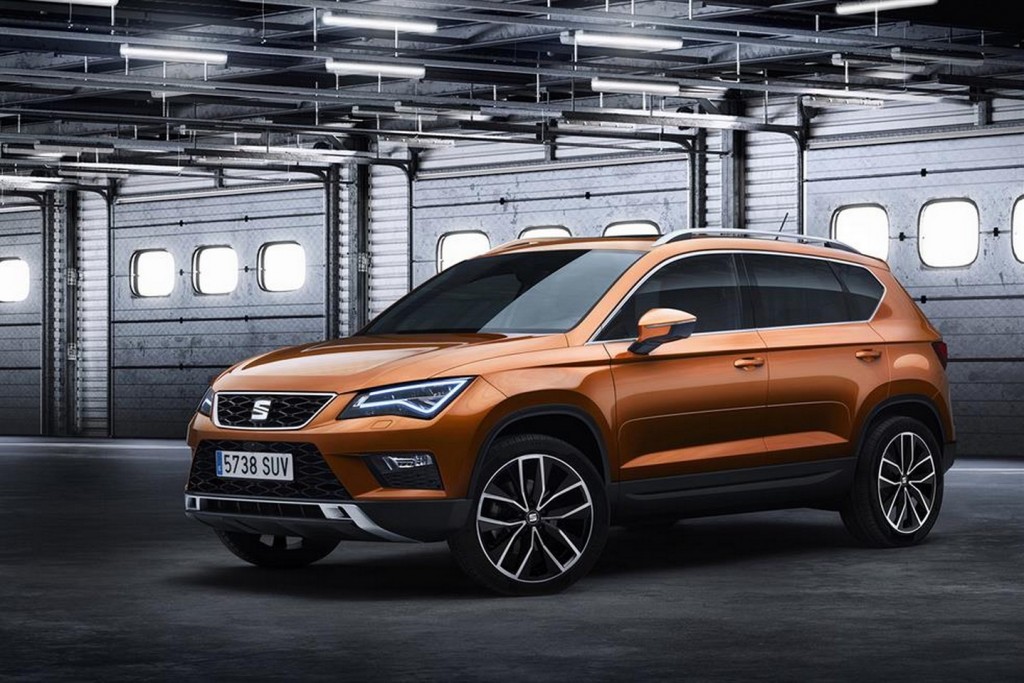 The interior harmonises perfectly with the exterior design, combining a refined and elegant, yet still dynamic character, with that unique feeling of solidity and safety which is  so highly prized by SUV drivers.

The cockpit has a horizontal line with a clear driver focus. The controls are grouped closely together, while the read outs, such as the infotainment display measuring up to eight inches, are just a brief glance away. The high centre console is a further example of how well the Ateca combines the SUV sense of solidity with the sporty feeling of a shortened gearstick. 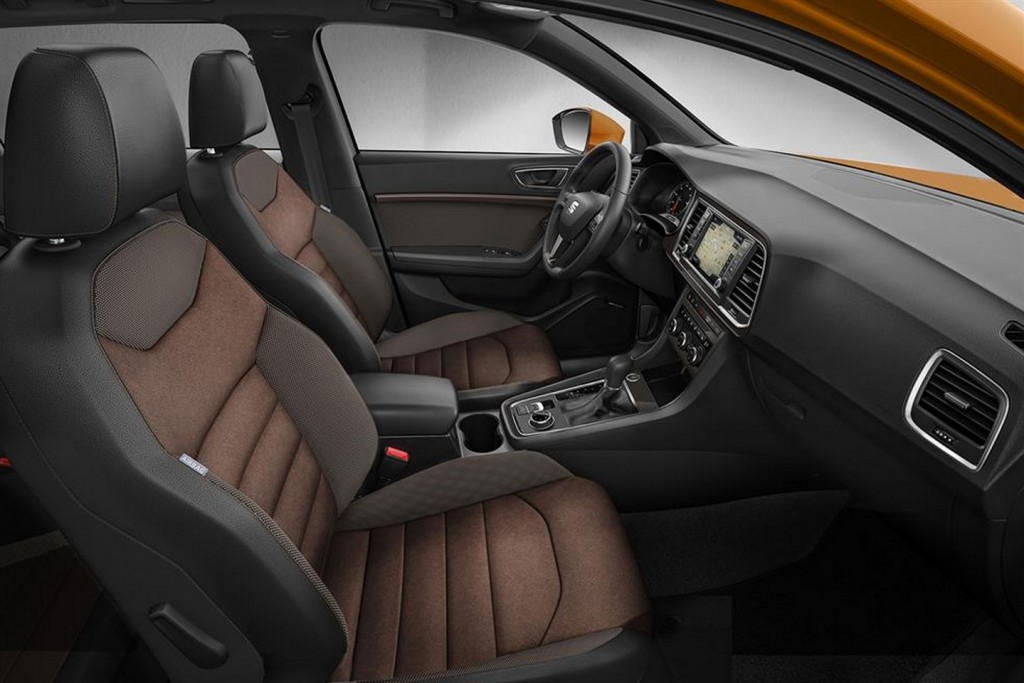 Excellent use of space, with plenty of room

At 4.36 metres in length, the Ateca offers some of the best use of space in the segment, with a boot that holds 510 litres in its standard configuration, or, 485 litres in versions with all-wheel-drive.

Once the driver is in the car, a ring of light surrounding the illuminated start button pulsates like a heartbeat, indicating the Ateca is all set for its next adventure. SEAT Drive Profile too, is on-hand for adapting the car to the current driving situation, road conditions and personal tastes.

The range of innovative driver assistance systems is extensive. One example is Traffic Jam Assist: This assistance function makes progress in heavy stop-start traffic far more bearable. At traffic jam speeds, the Ateca steers, accelerates and brakes automatically within the system boundaries. At higher speeds of up to 37 mph, the system provides support with speed control and lane keeping.

A new safety function is Emergency Assist: if the driver remains inactive beyond a certain period, the vehicle issues first a visual then an acoustic warning, followed finally by a brief pulse of the brakes. If there is still no reaction, the Ateca slows down to a standstill, while staying in lane. Rounding off its array of additional support technologies are ACC with Front Assist, Traffic Sign Recognition, Blind Spot Detection, Rear Cross Traffic Alert and Top View Camera. 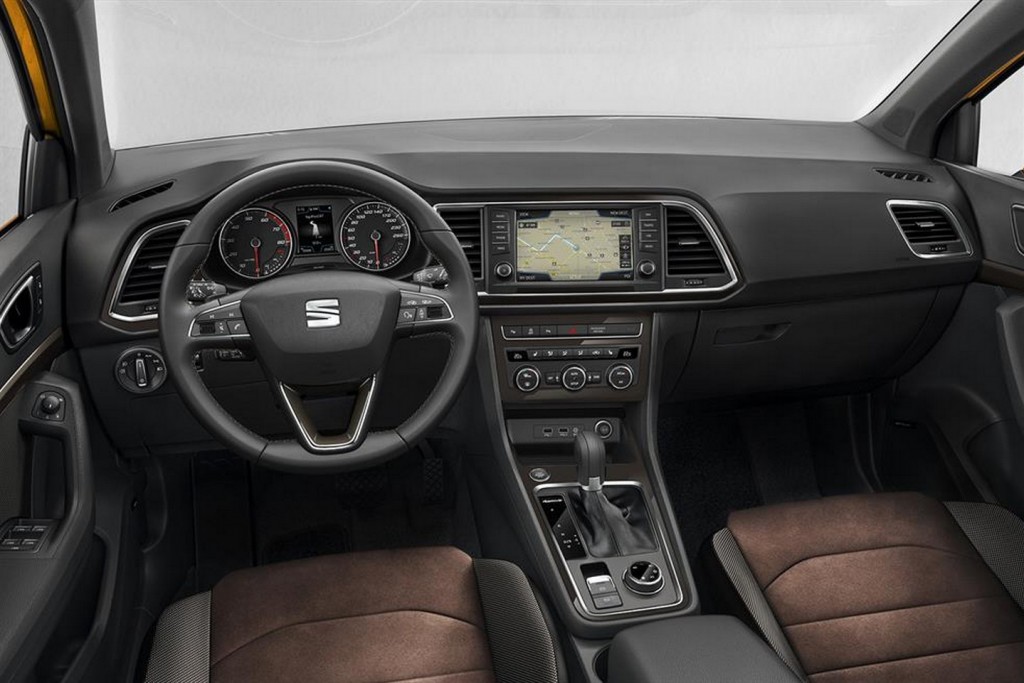 Connectivity, the constant connection with the digital world, is a major part of a modern, urban lifestyle for many people. The SEAT Ateca offers the very highest level in this crucial area – with the latest generation of Easy Connect infotainment systems, SEAT Full Link and the exclusive SEAT ConnectApp: Media System Plus, with its eight-inch screen, is the highlight, the Connectivity Box in the centre console of the Ateca enabling wireless smartphone charging for the first time in a SEAT. SEAT Full Link is the connectivity world for users of virtually all smartphones. Alongside MirrorLink®, Full Link also incorporates the functions of Apple CarPlay® and Android Auto®.

Impressive driving fun is at the core of the SEAT brand. The Leon in particular is a unique combination of precision and agility, comfort and safety, as confirmed by enthusiastic customer reactions and numerous comparison tests carried out by journalists across Europe. The Ateca is no less impressive when it comes to fulfilling this promising combination. With its compact character, powerful engines and perfectly tuned suspension, it offers performance and handling that sets a new benchmark among its SUV competitors. And it fits an urban and versatile lifestyle perfectly. 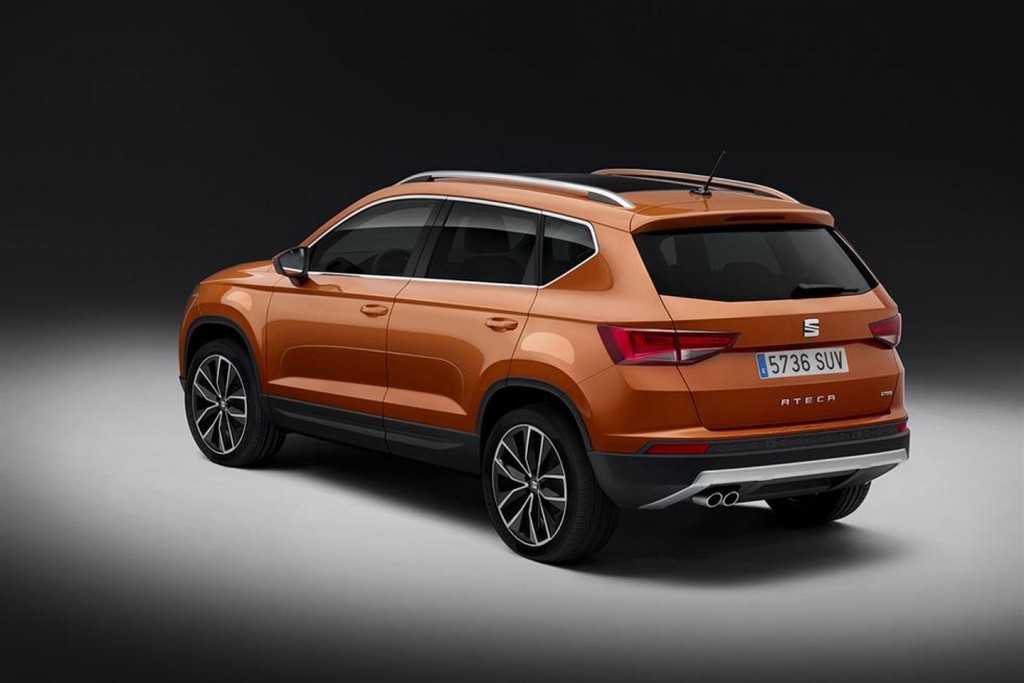 The Ateca’s dynamic driving experience comes courtesy of a suite of state-of-the-art engines – all of them turbocharged. Ranging from 115 PS to 190 PS with outstanding torque figures across the board, they meet every possible performance need. The array of diesel engines starts with the 1.6 TDI 115 PS. The 2.0 TDI is available with 150 and 190 PS. Fuel consumption figures range from 56 to 66 mpg, its CO2 figures from 112 to 131 g/km. The entry level petrol engine is the 1.0 TSI with 115 PS. The 1.4 TSI comes with cylinder deactivation under partial load and produces 150 PS. The consumption and emissions figures for these engines are between 46 and 53 mpg and CO2 figures of 112 to 131 grams.

The bodyshell is outstanding not only for its wide-ranging versatility, but also for its intelligent lightweight design. Incredibly stiff, the Ateca is also among the lightest vehicles in its segment, which secures an agile driving experience not only for urban traffic conditions. 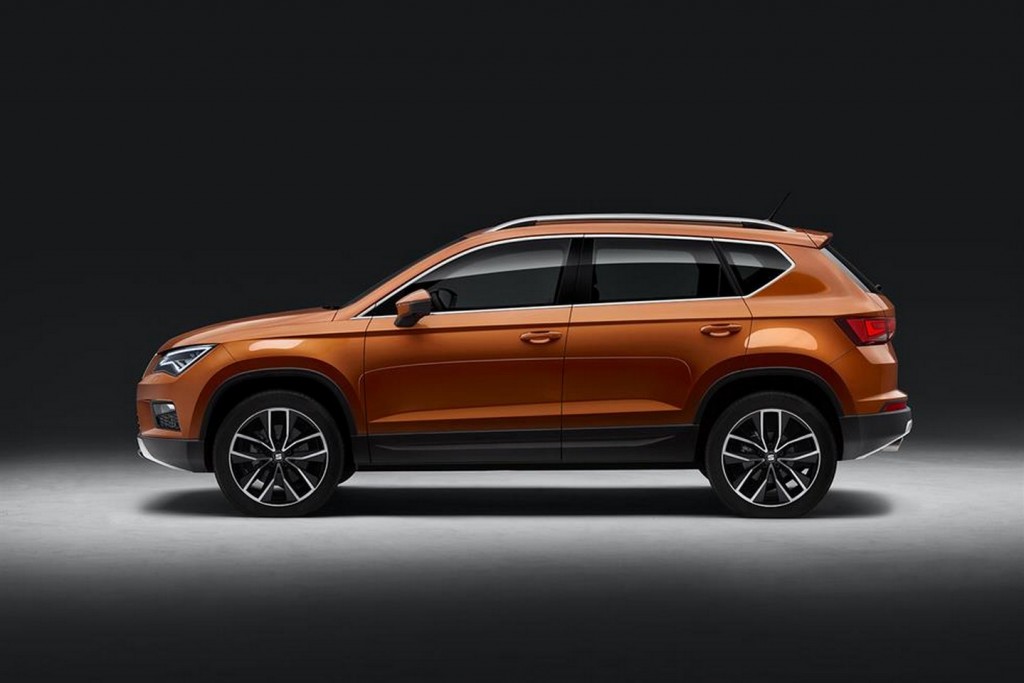 Potential UK buyers for Ateca can register their interest online from 11 February 2016, ahead of showroom launch in September. More information on SEAT’s latest model is available from www.seat.co.uk/new-cars/new-ateca/overview.html, on Facebook/SEATUK, on twitter @SEAT_cars_UK, or, by calling 0500 222 222.