SEAT will launch one new car every six months until 2020. The first two vehicles will be the SEAT Tarraco and the CUPRA Ateca, which are going on sale at the end of 2018. 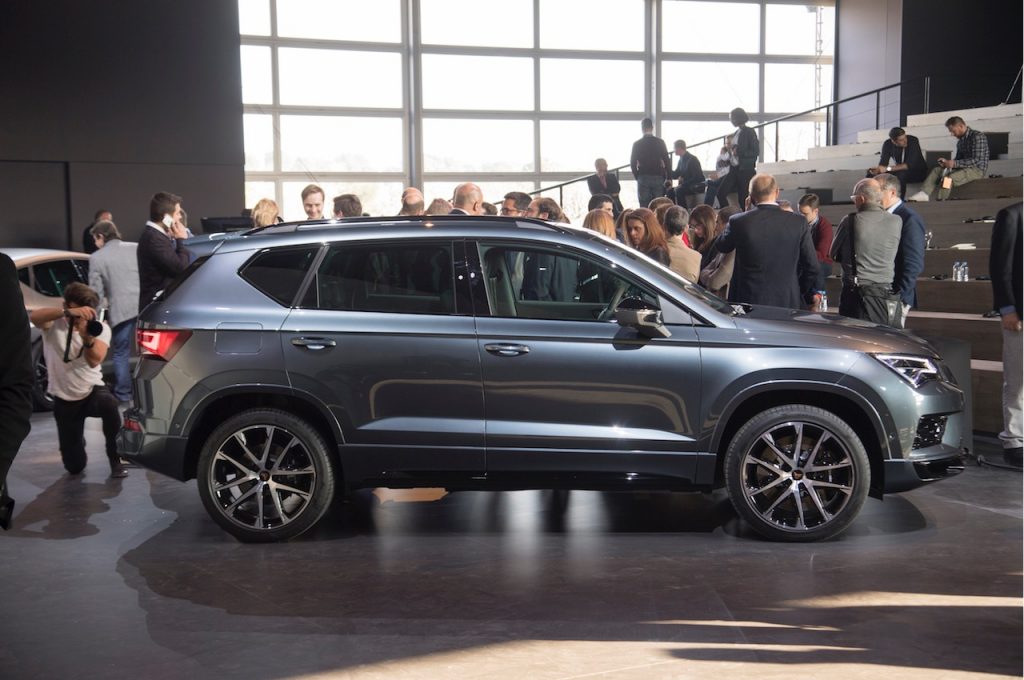 Next year the new generation SEAT Leon will be available in dealerships with two variants, the five-door model and the ST family sized version.

The following year – 2020 – will see SEAT’s first fully electric vehicle, built on the Volkswagen Group’s MEB platform and featuring a range of 500 kilometres and, for the first time, the addition of a CUV (Crossover Utility Vehicle) in the SEAT model line-up.

This was announced today by SEAT President Luca de Meo at the annual results presentation to the media held in Madrid. SEAT is taking a step forward in boosting electric mobility, which includes the hybrid version of the new generation Leon, also in 2020. In addition, the brand will remain committed to vehicles powered with compressed natural gas (CNG) as well as internal combustion engines.

The President of SEAT pointed out that “we can be happy with the 2017 results, but we shouldn’t be satisfied. Together we’ve closed a period of consolidation and now it’s time to look to the future with the ambition to grow.”

SEAT successfully concluded 2017. After achieving its best results in history in 2016, its profit after tax in 2017 grew to 281* million euros, which is 21.3% more than the previous year (2016: 232 million), excluding the extraordinary effect of the sale of the VW Finance, S.A. subsidiary to Volkswagen AG. Furthermore, the operating profit amounted to 116 million euros (2016: 143) as a result of higher volumes and higher investment activities due to new products with higher depreciation.

SEAT’s turnover reached a record figure of 9.552 billion euros in 2017, which is 11.1% more than the year prior (2016: 8.597). This was driven by the company’s sales momentum, posting the highest volume since 2001 with 468,400 vehicle deliveries making SEAT one of the fastest growing brands in Europe, and an improved vehicle mix led by the Ateca, a model with a better contribution margin. Since 2013, SEAT’s turnover has gone up close to 50%.

According to Luca de Meo, “2017 was a new year of records for SEAT”. From a sales standpoint, “the 2017 results are the outcome of a balanced development of all our models. Today we have one of the youngest ranges on the market, a little more than three years on average, which covers all the relevant segments in Europe with class leading products.” De Meo added that “in just a few years we have turned SEAT into a relevant brand for a vast majority of European customers.”

The new model offensive comes as a result of the highest investment figure since the Martorell factory was built in 1992. Last year, SEAT allocated 962 million euros to investments and R&D expenses, which is 11.6% more than in 2016 (862), and 10.1% of the brand’s total turnover. Of this amount, 464 million euros were earmarked entirely for R&D, a figure which represents close to 3% of the total R&D investment expenses in Spain, making SEAT the leading industrial investor in Spain.

From 2013 to 2017, SEAT invested more than 3.3 billion euros in its future, mainly allocated to its biggest ever product offensive, as well as to developing new services to achieve the goal of placing the company at the forefront of digitisation, connectivity and smart mobility.

SEAT Vice-President for Finance, IT and Organisation Holger Kintscher emphasised that “in 2017 we improved all our main financial indicators. SEAT continues to invest in its future and this is generating excellent results. We completed the largest investment in 25 years, and thanks to this effort in renewing and extending our product range, we have established all-time records for net sales, profit after tax before extraordinary effects and operating cash flow.” Kintscher added that “SEAT’s strategy is working and we have reached our goal of profitability. We are a sustainable company and are ready to face future challenges and finance our growth plans.”

In 2017, SEAT also increased the ability to finance its activity by relying on its own resources. In this sense, cash flow rose by 24.4% to reach the record figure of 947 million euros (2016: 761), which is almost three times more than in 2013 and demonstrates the company’s financial sustainability. SEAT has the necessary resources to deal with the technological transformation of the automotive sector and guarantee financial stability.

Moreover, in 2017 SEAT exported 81.1% of its business volume and established itself as Spain’s main industrial exporter, accounting for close to 3% of the total figure for the country. SEAT’s goal for upcoming years is to step up the internationalisation of the brand and keep growing beyond Europe.

From an industrial standpoint, SEAT debuted the new MQB A0 platform in Martorell in 2017 with the launch of the Ibiza and the Arona. Both models, together with the Leon and the Audi Q3, which will be replaced by the Audi A1 in the second half of 2018, have taken Martorell to 95% of the factory’s current capacity. In addition, the MQB A0 platform contributes to stability, as it guarantees a high-volume production output over the next 10 years.

The increase in production and the scope of the company’s future plans translated into more employment. The SEAT Group workforce grew by a total of 185 employees in 2017, and so far this year 265 more have been added. Furthermore, as established in SEAT’s collective bargaining agreement, the employees are going to receive a profit distribution bonus payment for the results obtained of 700 euros each, which is almost 50% more than the amount they received the previous year.

During his presentation on the company’s future plans, Luca de Meo indicated that SEAT’s growth will be based on four pillars: “more brands, more markets, more cars and more energies.” In this sense, in the first quarter of the year SEAT has launched CUPRA, which has always been the ultimate expression of sportiness, and from now on is set to become “a brand that generates more income, attracts new customers, remains committed to motorsport, seamlessly integrates technologies such as electrification, hybridisation, connectivity and driver assistants and enhances the image, credibility and reputation of the entire SEAT organisation”, explained Luca de Meo.

SEAT also recently created XMOBA, a new company whose main goal is to identify, test, sell and invest in projects that improve future mobility. XMOBA and CUPRA join SEAT Metropolis:Lab Barcelona, SEAT’s wholly owned digital-lab inaugurated in 2017, which is a part of the Volkswagen Group’s worldwide network of IT-Labs. The three new companies, together with SEAT, are beginning to shape “a holding with core activities and small companies under the same umbrella. Our intention is to combine the best of a solid corporate structure with the agility, flexibility and speed of start-ups.”

Furthermore, Luca de Meo reaffirmed SEAT’s commitment to opening outward and building a digital ecosystem around the car. Within this framework are the partnerships and agreements reached with companies such as Amazon Alexa, Shazam, Waze, Telefónica or Saba. “We want to be an important actor in the connected car revolution. Our ambition is to become a front-runner.”

Luca de Meo also pointed to SEAT’s globalisation as a further pillar of the strategy. The company operates in more than 80 countries, but only 15% of sales are made outside Europe. In this sense, the strategic growth regions are Northern Africa, where SEAT leads the Volkswagen Group’s vehicle assembly project in Algeria, and Latin America and Mexico, where the company is studying the feasibility of producing. In addition, markets have been opened recently in Norway and New Zealand, now making the company present on all five continents. SEAT is also participating in the joint venture between Volkswagen Group China and JAC by contributing its technical support and know-how in R&D and design.

In order to continue growing, SEAT will keep extending its model line-up. Luca de Meo announced that “SEAT is going to launch one new car every six months until 2020” and also revealed that “2020 will be SEAT’s year of electrification with the launch of a plug-in hybrid version of the new SEAT Leon, to be built in the Martorell factory and featuring a range of at least 50 kilometres, as well as the brand’s first fully electric vehicle, manufactures on the Volkswagen Group’s MEB platform.”

SEAT’s first electric vehicle, which has been previewed in video images, will be competitively priced, feature a range of up to 500 kilometres and come equipped with the most advanced connectivity and infotainment systems on the market and minimum level 2 autonomous driving capability.

The President of SEAT also reaffirmed the company’s commitment to vehicles fuelled with compressed natural gas (CNG). “We are leading the CNG vehicle technical development project within the Volkswagen Group. With the Arona TGI we are launching this year we will have the only SUV in the world powered with natural gas.”

Syphon
Interesting to see if the 2020 Leon is a new model completely or another iteration of the ever changing facelift... Ala' Kardashian style