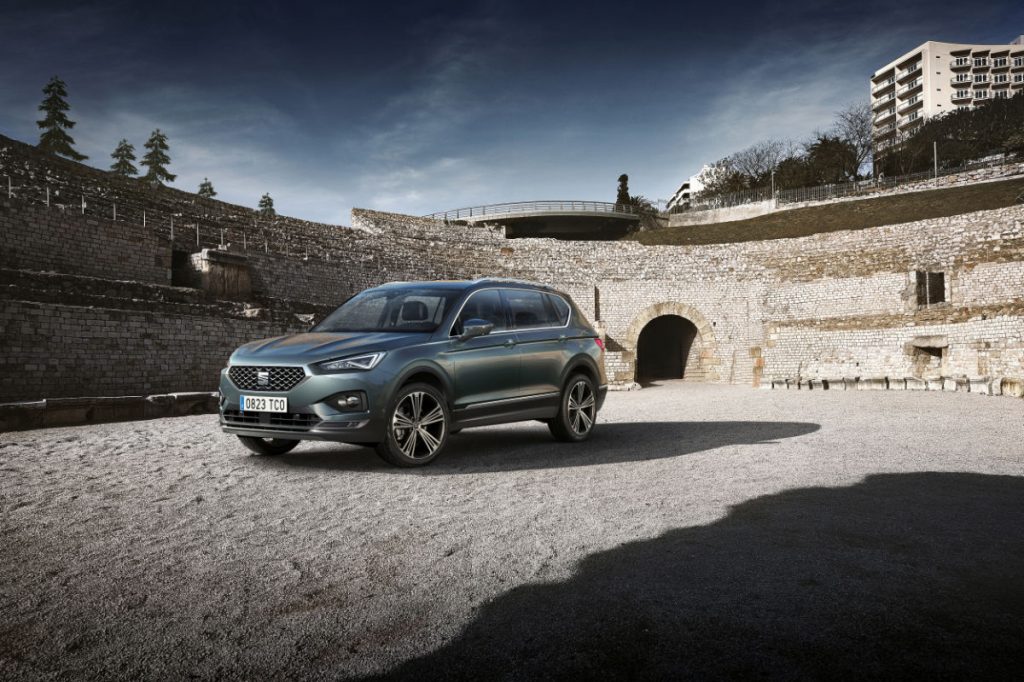 The future design direction of new SEAT models has been unveiled tonight as the wraps have come off the all-new Tarraco. The large SUV – named after the Mediterranean city of Tarragona, a historic cultural centre with a spirit that is young and adventurous – completes the Barcelona-based manufacturer’s SUV range.

The latest vehicle designed and developed at the facilities of SEAT in Martorell (Barcelona) and produced in Wolfsburg (Germany), marks the third instalment in the company’s SUV product offensive and shows a glimpse of the future design language of new SEAT models. Tarraco is the new flagship model of the brand and will bring the company new customers, boost brand image and have an important effect on profits, as this is a model with high contribution margins.

Tarraco sits at the top of SEAT’s SUV family, as the bigger brother to both the Ateca and Arona, and mixes state-of-the-art technology, dynamic and agile handling, practicality and functionality with elegant, progressive design. The Tarraco combines the many advantages of its larger dimensions to offer a vehicle that can take on all elements of modern life. 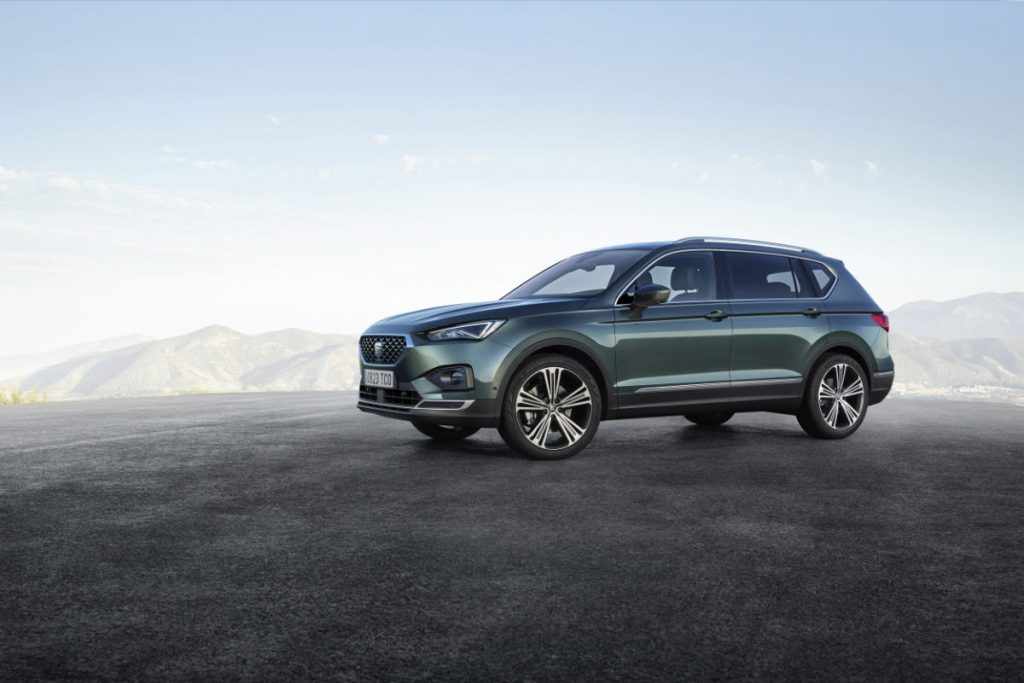 The new SUV blends the key attributes of every vehicle in the SEAT range – design and functionality, sportiness and comfort, accessibility and quality, technology and emotion –but in a form that suits a wider variety of lifestyles. The new Tarraco is designed for drivers who need the usefulness of a five or seven-seater and the practicality of a higher driving position, but are conscious of a vehicle’s aesthetics and appreciate the Tarraco’s balance between self-confidence and elegance. That balance is maintained across both available trim levels, SE and Xcellence.

As the SUV market continues to expand, the Tarraco will play a key role for SEAT when it is introduced at the very beginning of 2019, strengthening the brand and aiding further growth at a time when the company’s sales are rising steadily already. Between January and August, SEAT delivered 383,900 vehicles worldwide, an increase of 21.9% over the same period in 2017. 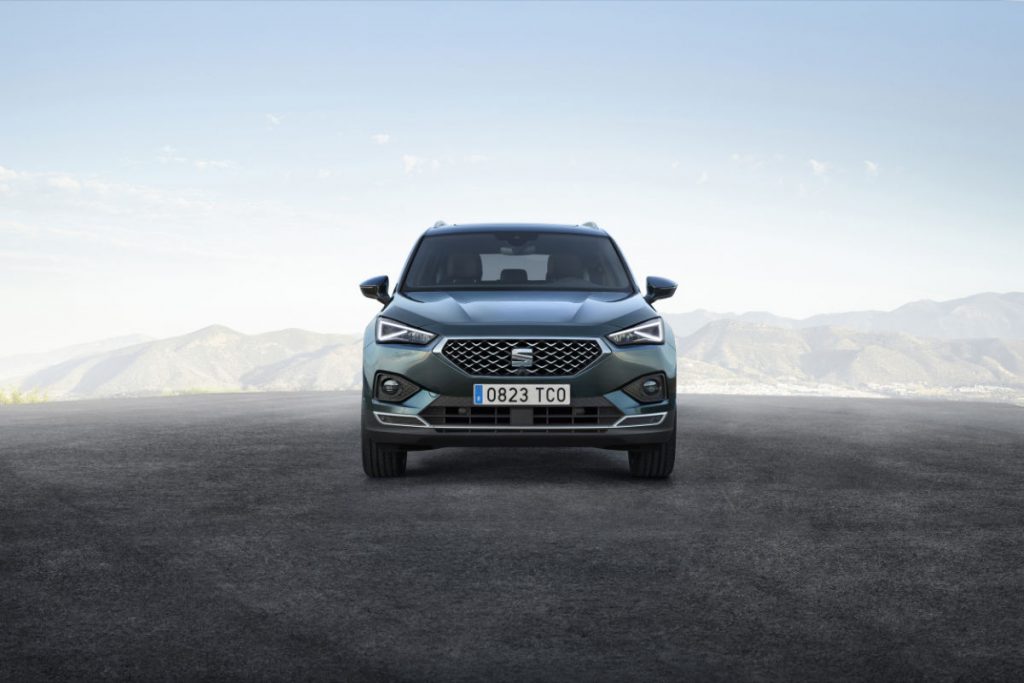 “SEAT is experiencing its biggest product offensive in recent times. The introduction of the SEAT Tarraco, our very first large SUV, forms part of our €3.3 billion investment between 2015 and 2019 in the company’s future and the range of vehicles we offer,” said President of SEAT, Luca de Meo, “It completes our family of SUVs, to suit every customer’s need”.

The SEAT Tarraco has been engineered for drivers looking for excitement and functionality in a single vehicle. People who need the practicality of up to seven seats and the space to transport family and friends, but appreciate a vehicle that reacts to the driver’s inputs and offers dynamic performance.

The key to its nuanced approach to practicality and dynamic behaviour is the latest technology from Volkswagen Group and the MQB-A long wheelbase architecture that underpins the large SUV. 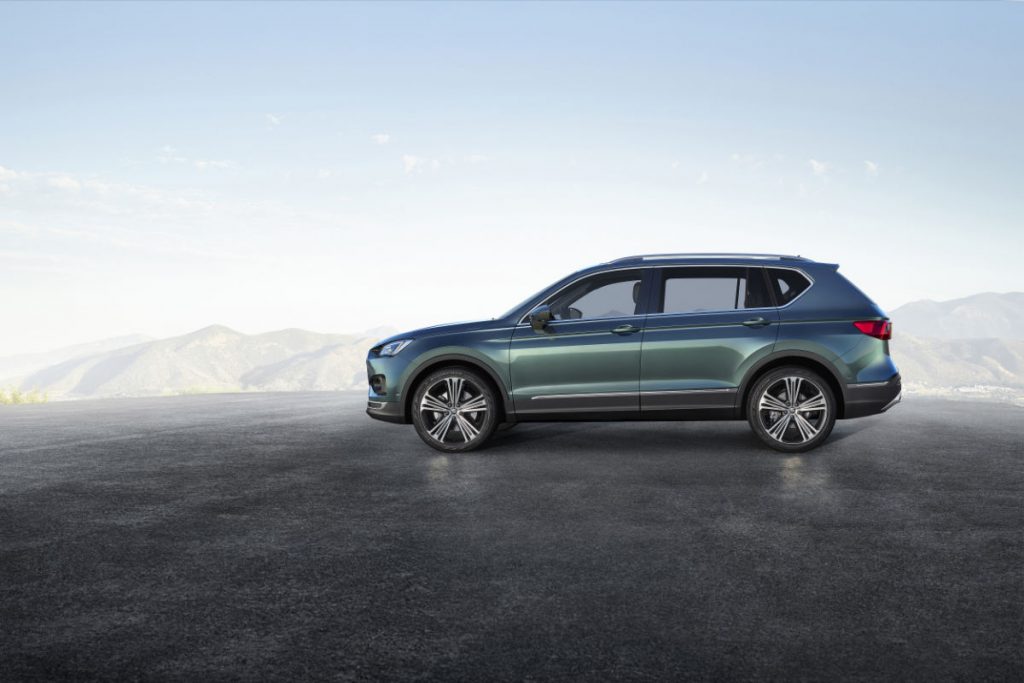 The vehicle’s Dynamic Chassis Control (DCC) setup gives the perfect balance between a sporty feeling when you are behind the wheel, and a more comfortable ride when you need to cover longer distances, on different types of roads. The driver can select which setting they prefer, but the system can also adapt automatically, modifying the ride depending on the road surface and driving style.

The smoothness of the ride quality is matched by the performance, efficiency and reliability of the powertrain options. All engines benefit from direct-injection, turbocharging and start-stop technology and offer power outputs of between 150PS and 190PS.

Two petrol variants will be available: a four-cylinder 1.5 litre TSI unit that produces 150PS and is linked to a six-speed manual transmission powering the front wheels, and a 2.0 litre, 190PS offering mated to a seven-speed DSG gearbox and 4Drive total traction system. There are two diesel options, both 2.0 litre TDIs, with power outputs of 150PS and 190PS respectively. The 150PS variant can be connected to either a front-wheel drive, six-speed manual or seven-speed DSG with 4Drive system. The higher powered version is solely available in 4Drive/seven-speed DSG gearbox. Later, the SEAT Tarraco will also benefit from alternative powertrain technologies. 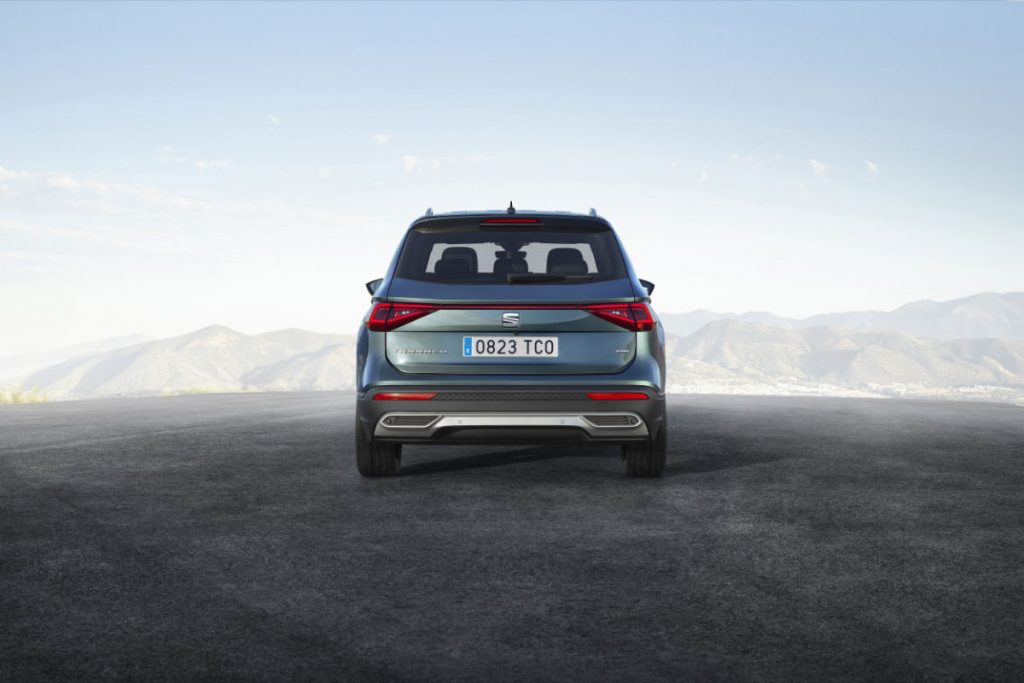 “The SEAT Tarraco is a masterpiece of functionality and flexibility, as it offers the space and flexibility customers expect from a large SUV. It is the sportiest vehicle in the segment from a design point of view and also thanks to the dynamic chassis control, which allows you to tune it to meet your driving needs,”said SEAT Executive Vice-President for Research and Development, Dr. Matthias Rabe.

The new SEAT Tarraco has all the driving assistance systems needed to make driving more comfortable and secure, even in more demanding driving environments. Well known systems such as Lane Assist and Front Assist including bicycle and pedestrian detection are standard in Europe, while systems such as Blind Spot Detection, Traffic Sign Recognition, Traffic Jam Assist, ACC (Adaptive Cruise Control), Light Assist and Emergency Assist are available as options. 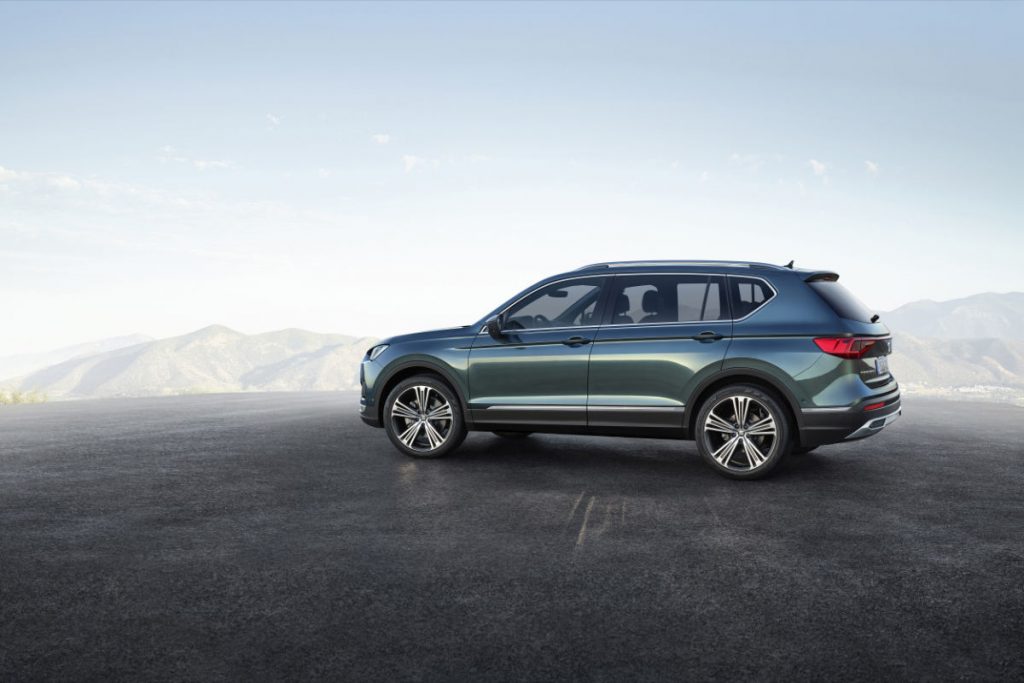 Taking safety to the next level for SEAT, the Tarraco SUV also includes Emergency Call, Pre-crash Assist and Rollover Detection, meaning no matter what the situation, the vehicle is designed to meet the most demanding safety standards in order to make the large SUV the benchmark model in the segment.

Bigger dimensions inspired the design team to find a greater balance between aesthetic integrity and purposeful proportions. And even though the Tarraco SUV is 4,735mm long and 1,658mm tall, creating a huge interior space and an imposing exterior, the overall design implies a lightness and agility as well as a robustness and perception of space.

The front design gives a hint to SEAT’s new design language, with a more prominent grille, giving greater presence and character, and while the sharp Full LED headlights retain the company’s triangular signature they are set further into the body, giving a more focused appearance.

Lighting technology forms an important aspect of the Tarraco. The SUV uses 100% LED technology for both the exterior and interior as standard on both the Xcellence and Style trims, giving designers greater creative freedom and the customer cleaner, crisper lighting. 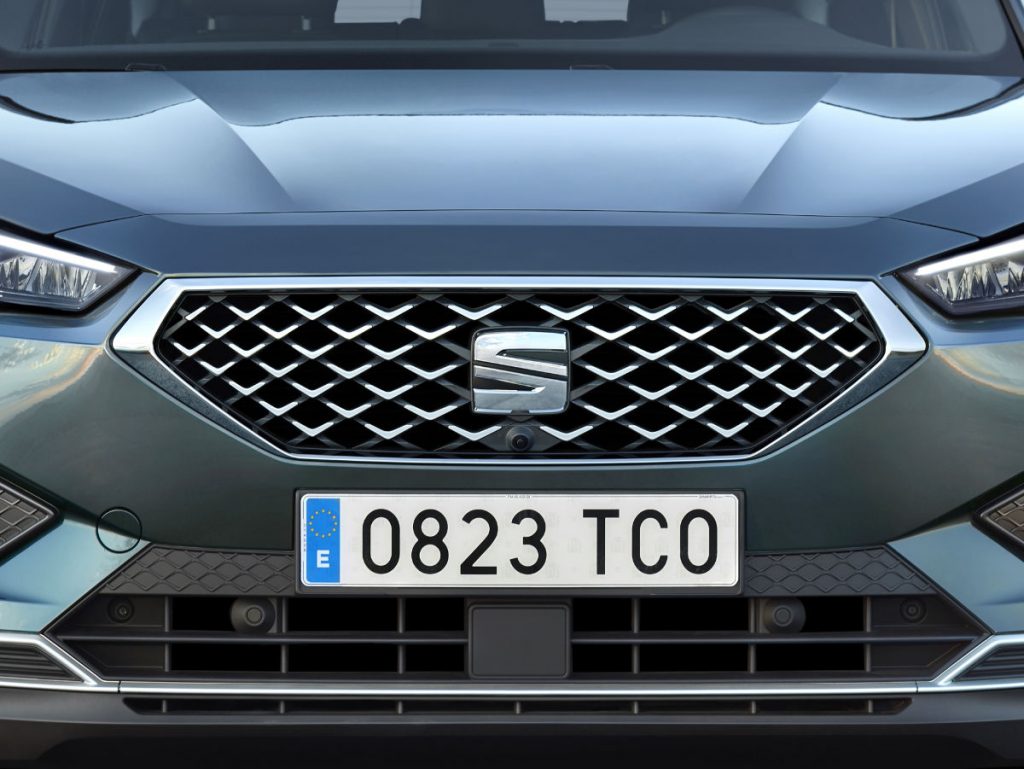 “I believe the new Tarraco gives a first strong impression when you see it for the first time because of its excellent proportions and elegant, yet sporty design. It delivers a feeling of proudness thanks to its assertive front end, a front end that gives you a hint to what future SEAT’s will look like,” said Alejandro Mesonero, Director of Design at SEAT, “And as we do in every vehicle we develop, we put a huge amount of our love and passion into the Tarraco’s detailing, following our philosophy: If it looks right, it is right.”

At the rear, where functionality is of immense importance, the emphasis is on a low loading area, but with a lighting concept to express the width and practicality of the SUV. The LED lighting also allows for dynamic rear indicators. 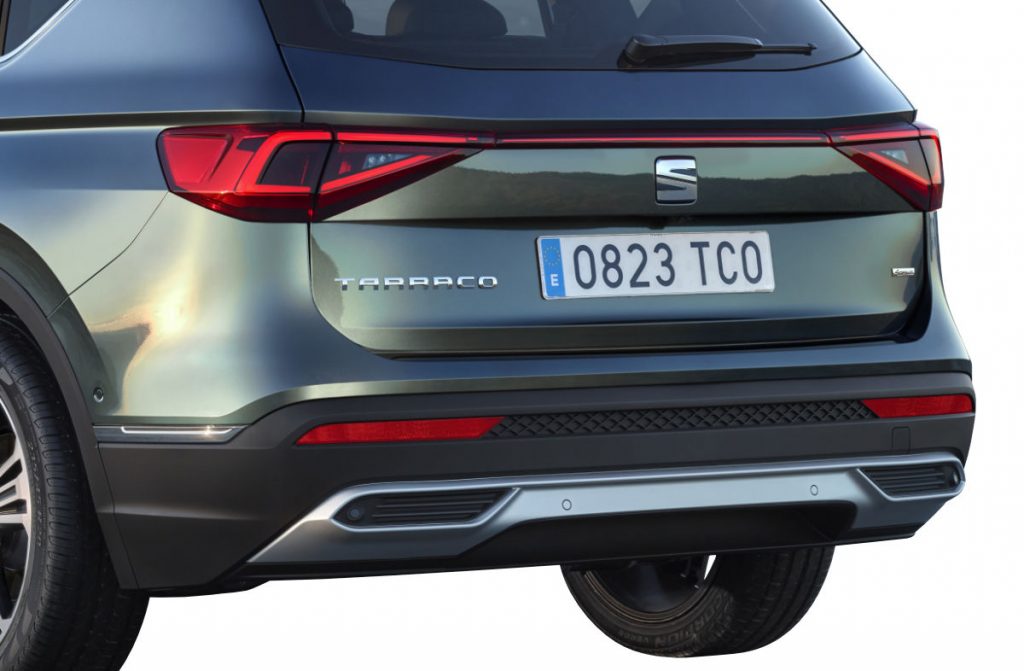 Inside, designers have worked hard to create an interior that cocoons the occupants, using a horizontal line that spans the dashboard but also emphasises the width of the Tarraco, increasing the feeling of space in the cabin while at the same time inspiring confidence, safety and a level of quality normally found in the premium sector. 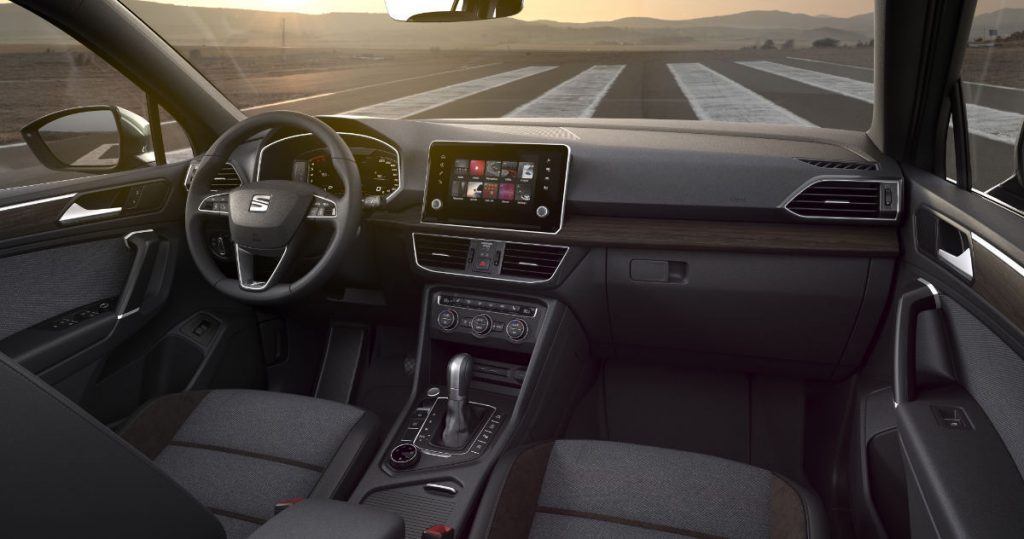 And as our world becomes increasingly digitised the Tarraco’s interior benefits from SEAT’s 10.25’’ Digital Cockpit, streamlining the delivery of important information to the driver, and an 8’’ large, floating HMI screen where occupants can access SEAT’s suite of connectivity options. Finally, when it comes to infotainment systems, The Tarraco will be the first SEAT to feature gesture control functions (when equipped with 8’’ Navigation Plus).

Pre-sales of the SEAT Tarraco will start in December.

We attended the press launch and you can read the write-up and see more photos here.