Overview Discussion
This guide was written by @Pabs


This modification came about when I realised how badly the standard wipers on the Leon were. Not only do they look ugly, but they also tend to leave huge smears across the windscreen, which impairs visibility. My passenger wiper did nothing but smear, no matter how many times I changed the blade itself. So I decided to give this modification a try.

First thoughts were regarding the price of the parts to complete this. The standard RRP at time of writing is just a tad over £80 for the wiper arms and blades. So, up to my usual tricks, I shopped around and managed to find a source for just over £60. A day later, my addiction to eBay paid off and I managed to get a whole aero wiper set, plus an additional set of blades (brand new) for just over £40. Now I feel good

1. The first step is to get the wipers into the "up" position. To do this, turn on the ignition, turn on your wipers and when they reach the top, turn off the ignition immediately. This will leave them where they are, ready for the next steps. YOU MUST NOT SKIP THIS STEP - Failure to do so means you could snap the motor thread, meaning you will need lots of money to repair it! 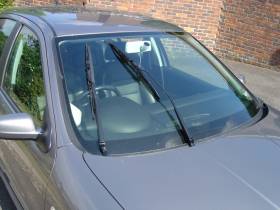 2. Standing by the driver's wing mirror, looking down to the wipers, you will see your wiper arms. Using a small flat-bladed screwdriver, remove the plastic cap to expose the nut as shown in the photo on the right. Repeat this on the other wiper arm too. 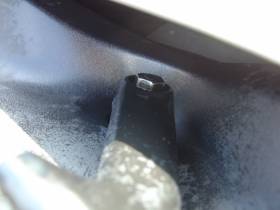 3. Open your bonnet and you should see the two nuts easily. My first recommendation is to soak these in WD40, to try and loosen them up, as you don't want to shear them off the thread. I left mine for 5 minutes letting the WD40 do its stuff.

When you are ready, undo the nuts. Now, when you do this, you will find that you will be fighting with the wiper motor, so hold the wiper arm with one hand, and loosen the nut with the other. Take your time and all should go well. They are on VERY tightly in some cases. Repeat this on the other wiper when you are ready. 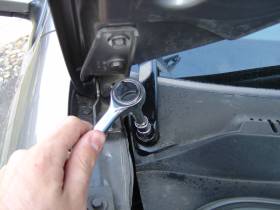 4. Now the nut is removed, showing the thread as per the photo on the right. The next step is to remove the arms from the wiper motors. I found it easier to close the bonnet for the removal of the arms. 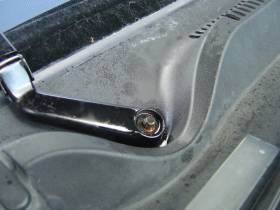 5. Firstly, pull the arms away from the window as per the photo. Then, standing again by the driver's wing, facing across the car, place your right hand on the arm near the motor, and your left further up the arm/blade. Now, wobble/wiggle your left hand forward and backward (across the car)

GENTLY and slowly, keeping the right hand on the bottom of the arm, to stop the arm scratching the plastic shroud across the bonnet. I also used my right hand to put upward pressure on the arm, sliding it off the spline on the thread until the arm came off. BE CAREFUL HERE, we don't want you going too far and snapping the motor arm off. Again, repeat this for the passenger blade. 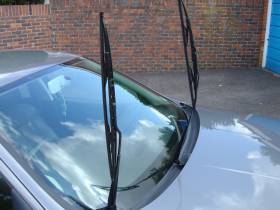 6. Now you should be able to compare both sets of wipers - here is a pic of them now! The new ones look so much better!

Now, fitting is a reversal of removal. Put the new arms (making sure you get them in the right place) and obviously don't forget that the motors are in the UP position, so put the new arms on in the same position as the old ones were. Replace the nut and tighten until the arm is held onto the motor, and then test the wiper to make sure you are happy with its position etc.

When happy, fully tighten the nut and replace the plastic cap. Repeat this with the passenger wiper, and voila - job done! 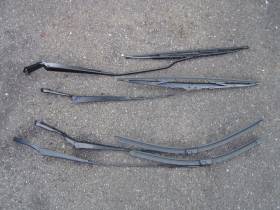 The passenger blade on the Aero wipers is about 10mm too long. Now, two solutions are available - 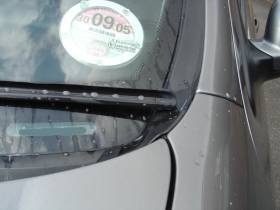 I opted for the second option, as I didn't want to have to keep cutting blades down every time I replaced them. I Literally removed the passenger's arm and repositioned on the spline a few degrees upward, so the blade doesn't come down quite so far. It now sits just under the tax disc height in the photo, but the blade doesn't hit the plastic on the side. Result