I have noticed there are a number of threads running, in a number of sections, about the availability of Amazon Alexa in new SEAT models. Below is the only information, produced verbatim, that has been released to the UK dealer network so far:

SEAT will be the first automotive brand in Europe to integrate Amazon Alexa in its vehicles. The technology will be available on Leon and Ateca before the end of 2017.

Customers can use Alexa services on any Leon or Ateca fitted with Navigation System High built from week 22 2017.

How and when will it work?
Alexa will be integrated into the SEAT Media Control app that works with Navigation System High over WLAN connection. The app will be updated to enable Alexa for Android in week 50 2017 (starting 11 December 2017).

The technology will let the driver use current Alexa functions - or ‘skills’ - in the car. You simply ask questions such as: ‘Alexa, will I need an umbrella today?’. Alexa is activated by double-pressing the mute button on the steering wheel or pressing the Alexa logo on the SEAT Media Control app.

What about other models and iOS?
Alexa requires a WLAN connection, which is currently only available on Navigation System High for Leon and Ateca. Other navigation systems will be updated to include WLAN connectivity with the switch to model year 2019 in week 27 2018 (July), so customers will be able to use Alexa services on any Ibiza, Arona, Leon and Ateca with any navigation system built from this date.

MY19 – Media Control app to be updated on iOS (ie Apple devices), which will enable Alexa compatibility with all Leon and Ateca built with Navigation System High from week 22 2017. Standard Nav (in Ibiza, Arona, Leon and Ateca) will also be updated to include WLAN connection, so all navigation systems from these vehicles will be compatible with the Media Control app and Alexa services from this date.
Click to expand...

Thanks for that. Interesting that wifi is to be enabled on the bog standard one.

My succes with Seat app hasn't been that great. I don't have MirrorLink so I couldn't use the Seat Drive app.

I did have the VW one of this loaded up before I got the car - deleted it again. I'm interested in the integration of Google Maps with the car's system which it says it does. I do find the Android paid app Map Coordinates very good as a navigation aid since it toggles between Openstreet and Google Maps. Openstreet is very good for outdoor activities whilst Google Maps is good for commercial activities. Map Coordinates also allows you to walk streets with Streetview whilst Google you can only start the walk from an existing item on the map and sometimes fissles out. You can bookmark and share location back into Google or any other mapping system. Did that with Navicon in Japan to get the Japanese Mapcodes for inputting into the unit. Map Coordinates provides the DMS format as one of several formats. Missing from Google... the old thumb wheel to get them in. Maybe this app will skip the thumb wheel input if it works.

I tend to keep the wifi signal off on my Mib2 High in that it swamps any wifi signals I may be using for the Obdeleven. I'll give it a go at the weekend. Thanks... but I won't be testing Alexa

Ok I did have a go with the Seat Media Control app on my Plus unit last weekend, whilst the unit exchanges all of the cars data like outside temperature, height above sea level, fuel consumption and integrates with media playing it doesn't integrate with the navigation via live internet data. There is a missing menu from the unit "Internet Access Setting" which is above the mobile hot spot on the apps help video. Basically to get it to work correctly you set up a hot spot on your phone / tablet then link the unit into that using the top menu rather than the car's hot spot (second menu down if the car has the latest menu). That's called "client mode" in wifi equipment parlance. Linking the phone into the car's mobile hot spot (without internet) gives you all functions but without those that use the live internet link like Google Maps - hence the app doesnt work fully.

The car's setup menu should look like the screen below with the yellow ringed 'Internet Access Settings' menu which you use to setup the clients mode so you can tether the car's system to your phone / tablet which would be online. 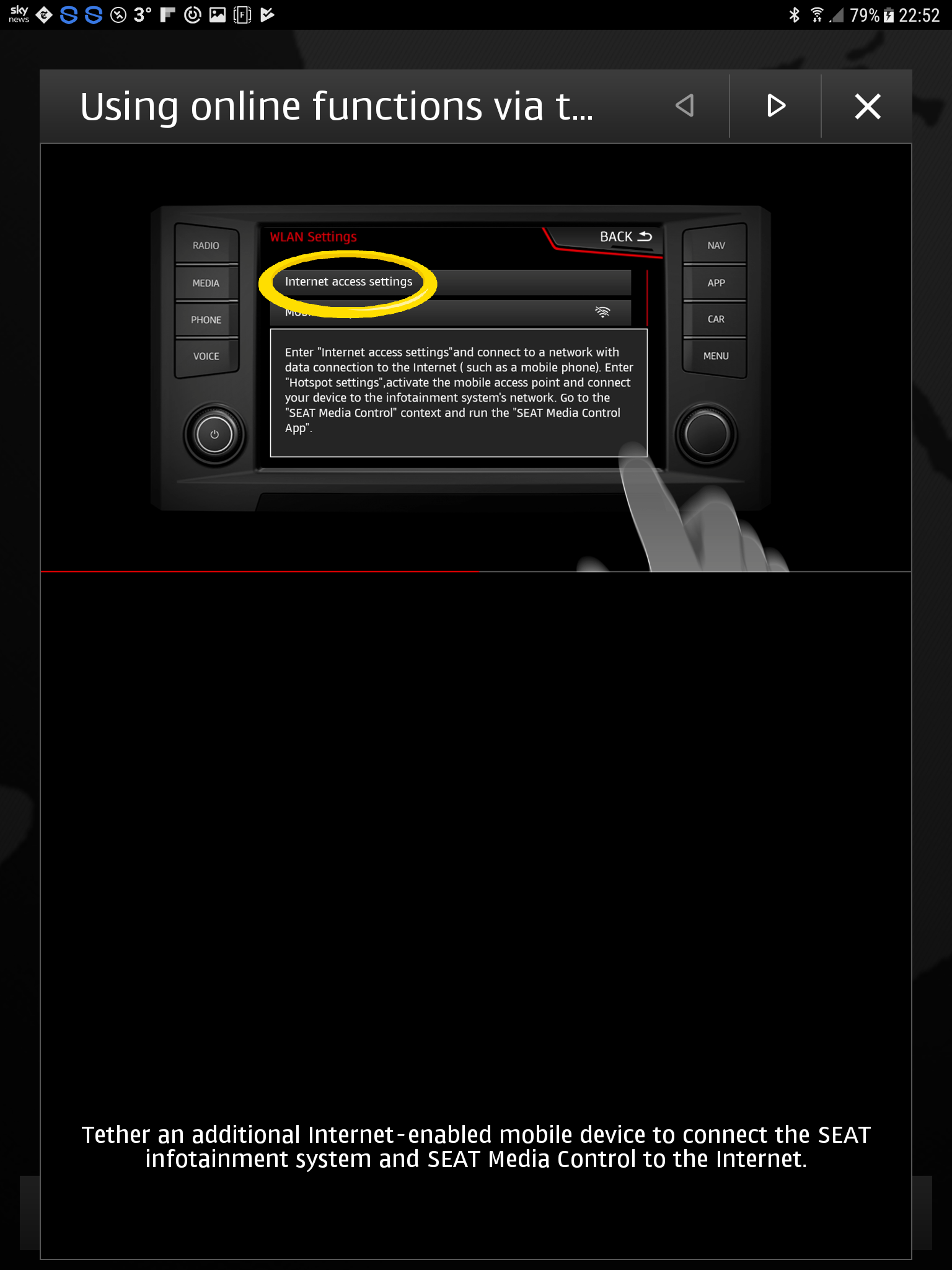 If you haven't got the 'Internet Access Settings' menu option on the Navigation Plus unit you can link to the car's 'mobile hotspot' but this is not on the internet. The effect is no live Google maps data on your device so the app shows the car's data but not anything to do with Google Maps. The yellow circle shows the device is not online and missing map data shown in the Seat app. 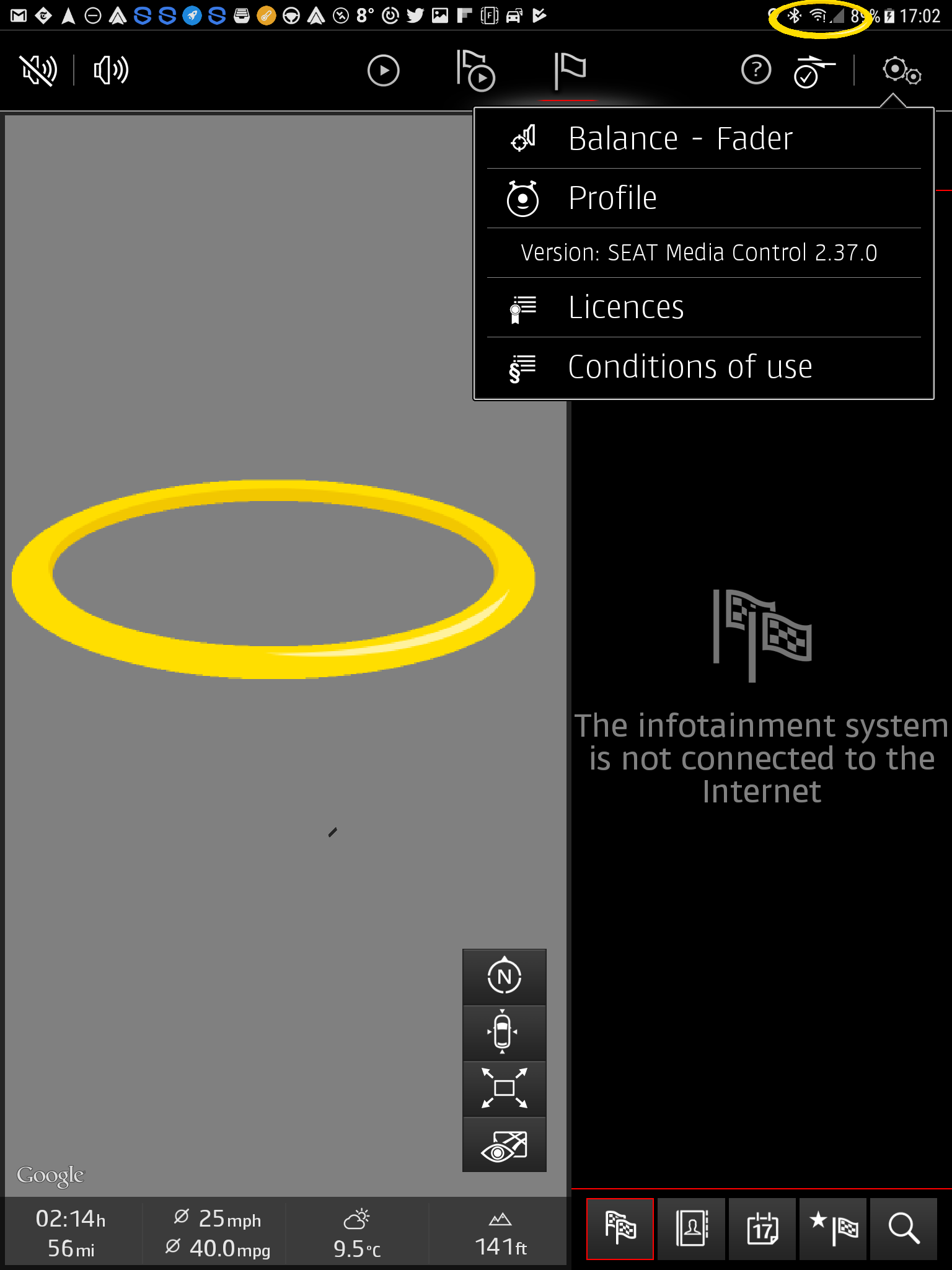 Since us people with the Seat Plus unit (Discover Pro Mib2 family) are in a minority I checked the German Ateca site where Plus units are more popular. Found this thread that confirms the issue that Seat altered the Seat Plus build in production during 2017, given mine is 2016, obviously I don't have it. No "Internet Access Settings" menu, no live internet access to a hot spot or home wifi router, just the ability to enable the car's wifi hot spot.

Seat replied to a poster

first we would like to apologize for the long wait.

After detailed research with our internal departments, we regret to inform you today that you unfortunately can not use the Internet Access of the Media Control App, as this is only available for vehicles from production week 22/2017.

As an alternative to the SEAT Media Control, we would like to suggest the SEAT Drive App or the SEAT Connect App.

The only hope I sort of guess is whether within the OBDeleven or similar whether you can poke about at turning it on if it's one of those toggle controls with a suppressed menu. I haven't researched that yet, something for the winter months.

Bit of research now, haven't tried it but the solution may be to toggle the parameter

To On in the 5F module if you can find it, then reset the unit by a long press on the volume control... never know the missing menu may then appear.

The commands seem to be common to Audi and VW.

Google Earth is suppose to be built into all of the Discover Pro models but not enabled on all but the top of the range. Anyone who wants to experiment with a Seat Mib2 High:

Think I'll stick to see whether I can get the client menu up . There is other stuff on the net on toggling something else but most point to the command toggle above. Depends whether Obdeleven pulls these out for the Ateca Adaptation 5F channel menu or whether you need to know the actual bit to toggle which will be different by brand / model. Post 17 on the Audi got it working with OBDeleven with the adaptations menu. VCDS may implement it better... weekend task.
Last edited: Feb 1, 2018

Update: This new function has been delayed...
Click to expand...

Update: This new function has been delayed...

Thanks for that. I'll proceed with the principle of optimality and see if I can turn on the wifi client for High units built before week 22, 2017 which will mean if they get Alexa working I'll be able to use it and the Seat Media Control App in the mean time.

I might have to put a requestion in for anyone with an Ateca with the menu to share their 5F long string if the Obdeleven doesn't pull the parameter out above on the Adaptations menu. Suspect there might be a lot of Ateca owners of the High unit that might want to get this working once Alexa is out.

Good news on getting a Navigation High (Plus) unit to work with the Seat Media Contol Android software built before wk 22 2017 .

It's possible to turn the wifi client on with the Obdeleven. Got some screen shots of it working. I wouldn't mind seeing someone else's settings for post wks 22 2017. Essentially my wifi menu has swapped from being a hot spot to being a client when WiFi_Client_HMI is turned to on. The Seat app shows both icons being shown, I just get one but WiFi now enables Client mode. It's not a great loss losing the cars hot spot although I'm wondering whether I could get both to show via cross checking with a post wk 22 2017 cars settings in case I've missed something.

The Obdeleven menu has also the Google Earth controls as referenced above, I haven't tried them. Plus now implements a menu to toggle on satellites groups, Galileo being one. They are set to on... Will see whether it actually receives Galileo by turning the rest off... that has been a question Ive had for a time but the controls for this hadn't been brought out .

I'll show these on another thread and put how to do it on the Obdeleven thread. So all is not lost if you have a Navi Plus prior to wk 22 2017. There is also a chance that the wifi of the standard unit can be turned on as well using this method. These unit are suppose to have wifi built in just needs turning on. The unit has to be plugged into the USB to bring up the client mode after the mod with the drop down SSIDs. You supply the tethered hotspot.
Show hidden low quality content
You must log in or register to reply here.
Share:
Twitter Reddit Pinterest Tumblr WhatsApp Email Link