This thread involves "stuff" I've observed to do with my 6J 2016 Ibiza but may be applicable to many others so I've decided to post here rather than in the dedicated Ibiza thread.

Ok, so what's he on about I hear the cry go up. Well, I've seen a number of posts on this forum, and in other places, about unresolved clonks, clunks and rattles from the front end of these cars - in fact not just confined to our makes only - and I've been experiencing the same for about the last couple of years. It started out as an almost unnoticeable little tapping noise and has progressed to being a definite clonk/clunk some two years later. With the state of the roads today you really can't miss it as you thump and clatter across the pot holes and poorly repaired road surfaces which are breaking up again. I think it's taken so long to progress because, being retired, I don't do a lot of mileage - she's a 2016 car with 26,000 miles on the clock and I've done all my own service work since her warranty expired at 3 years.

I'd had a couple of half hearted attempts at tracing the source of the noise last year when I did the annual service last year when I noticed the noise had become a bit more intrusive. The strut top mounts have the common rubber creaking noise but there is no sign of bearing problems or road spring wind up when taking her lock to lock so I've eliminated the top mounts from this particular investigation - I've never heard a top mount make this sort of noise anyway. So this year I decided it was getting a little bit "silly" and it was time I really found out what was going on. I did all the usual checks for wheel bearing and ball joint wear - track rod ends, track rod inner joints, rack bushings and bottom arm ball joint and rubber bushings - all seemed in good order including the antiroll bar rubbers. The noise is such that I'd been expecting to find a drop link ball end with wear, but no! Then I thought, wonder if it could be something to do with a strut? so I wiggled and pushed and pulled and jacked up against the struts on both sides but no leaks and no sign of free play at all. The annoying thing is that it's as quiet as you like on smooth road surfaces only making itself known when the "going" gets rough.

At this point I must say that I was unsure which side the noise was coming from and many of you will be familiar with how frustrating that can be, but the reason was very simple, it was coming from both sides - more on that in a minute.

So I'd done all these checks and come up wi' nowt to account for it. I'm sitting on my bottom beside the O/S/F wheel hub - wheel removed - feeling pretty silly and dejected that I couldn't spot it and thinking I'd just go and make a cup of tea, when I noticed there was a small gap between the top of the brake pad backing steel and the caliper carrier which the pad rests against and takes the reaction force when you brake. I've mentioned before that I'm not greatly impressed with the design of these FS111 calipers (that's what Haynes calls them) and if you look carefully at this picture you can see the gap: 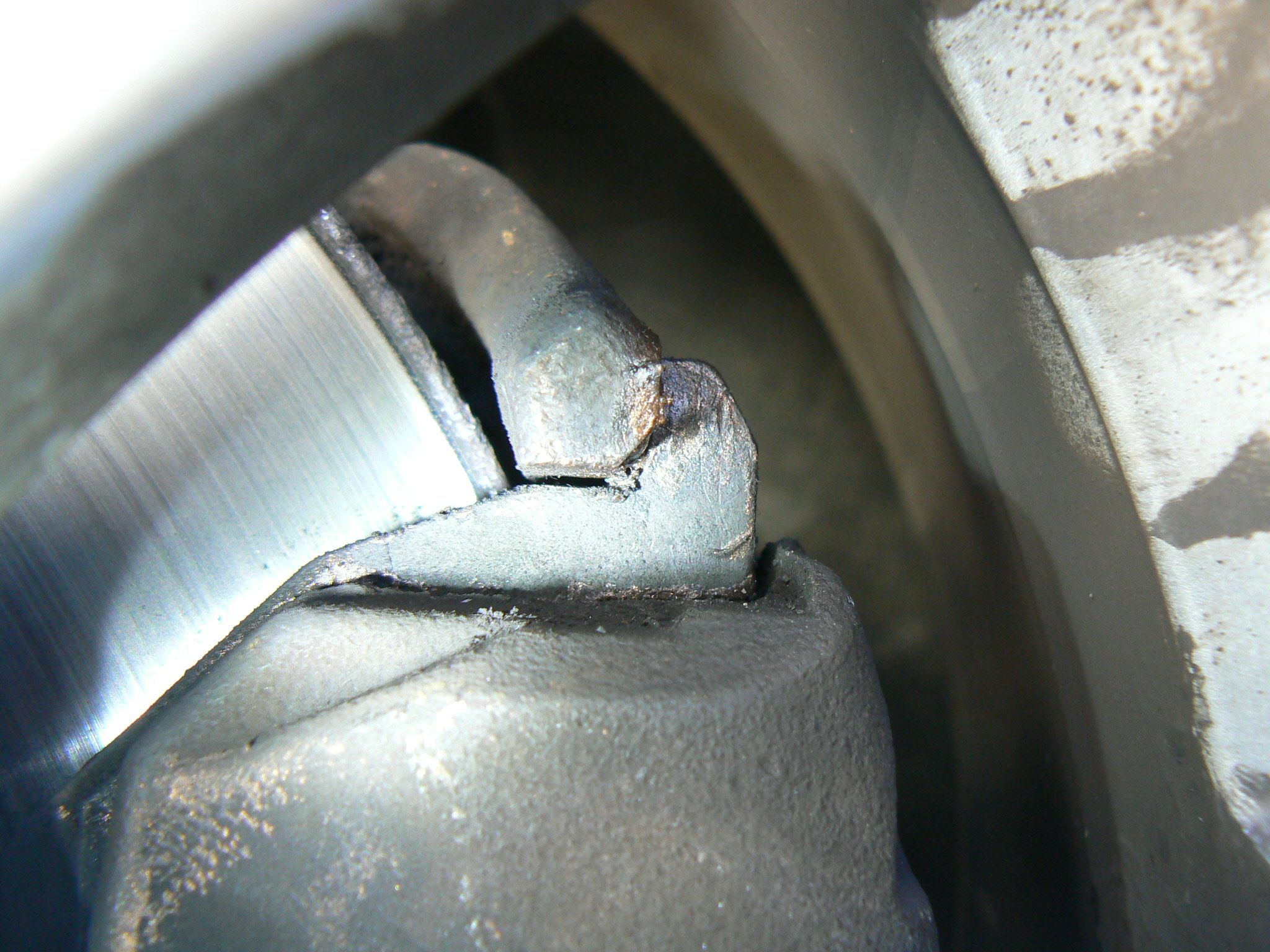 Here it is again with a 25 thou feeler stuck in it (it actually measured 33 thou) so about the sort of gap you'd expect on a spark plug. 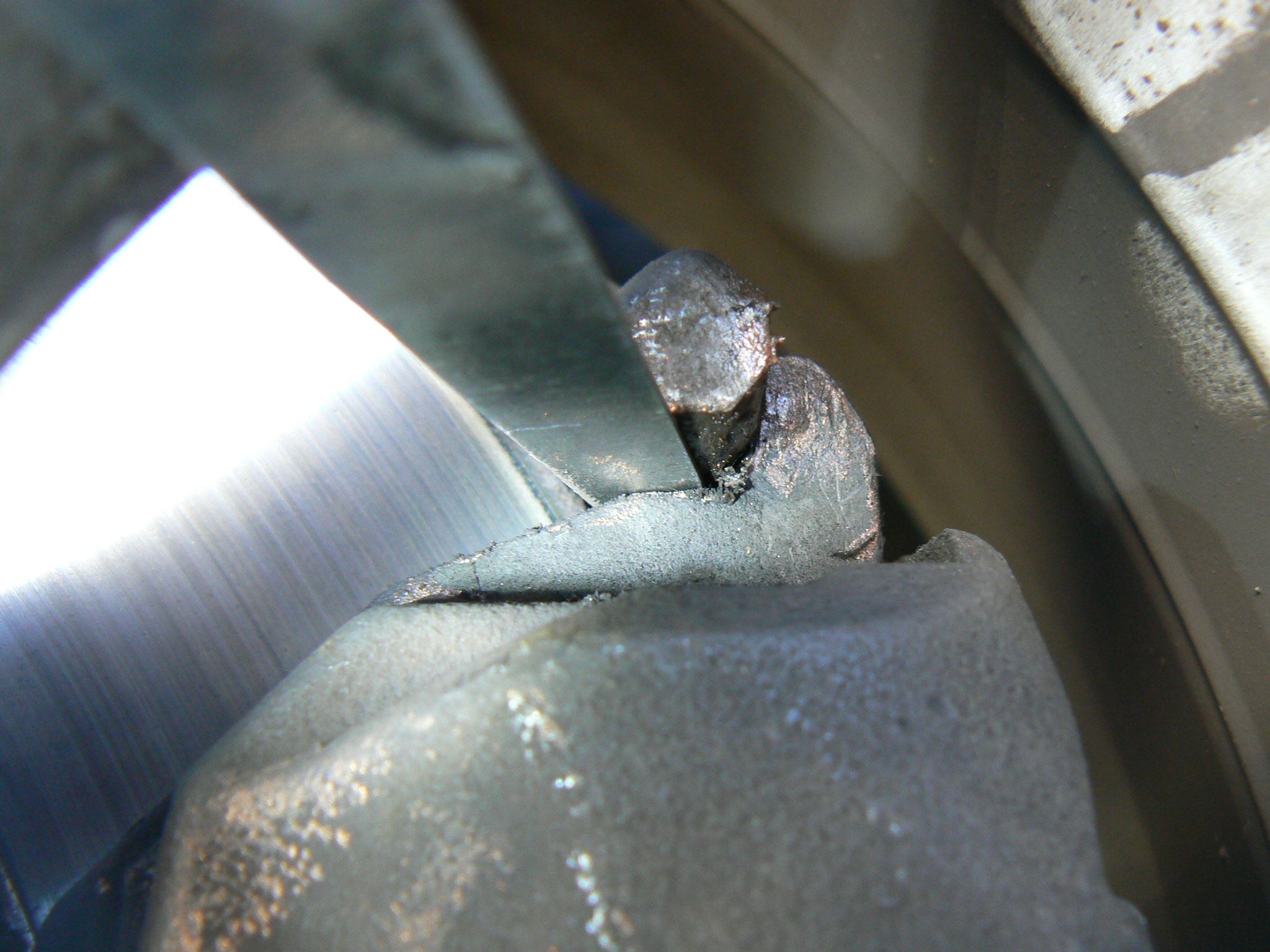 Looking at the bottom of the same pad there seemed to be no gap: 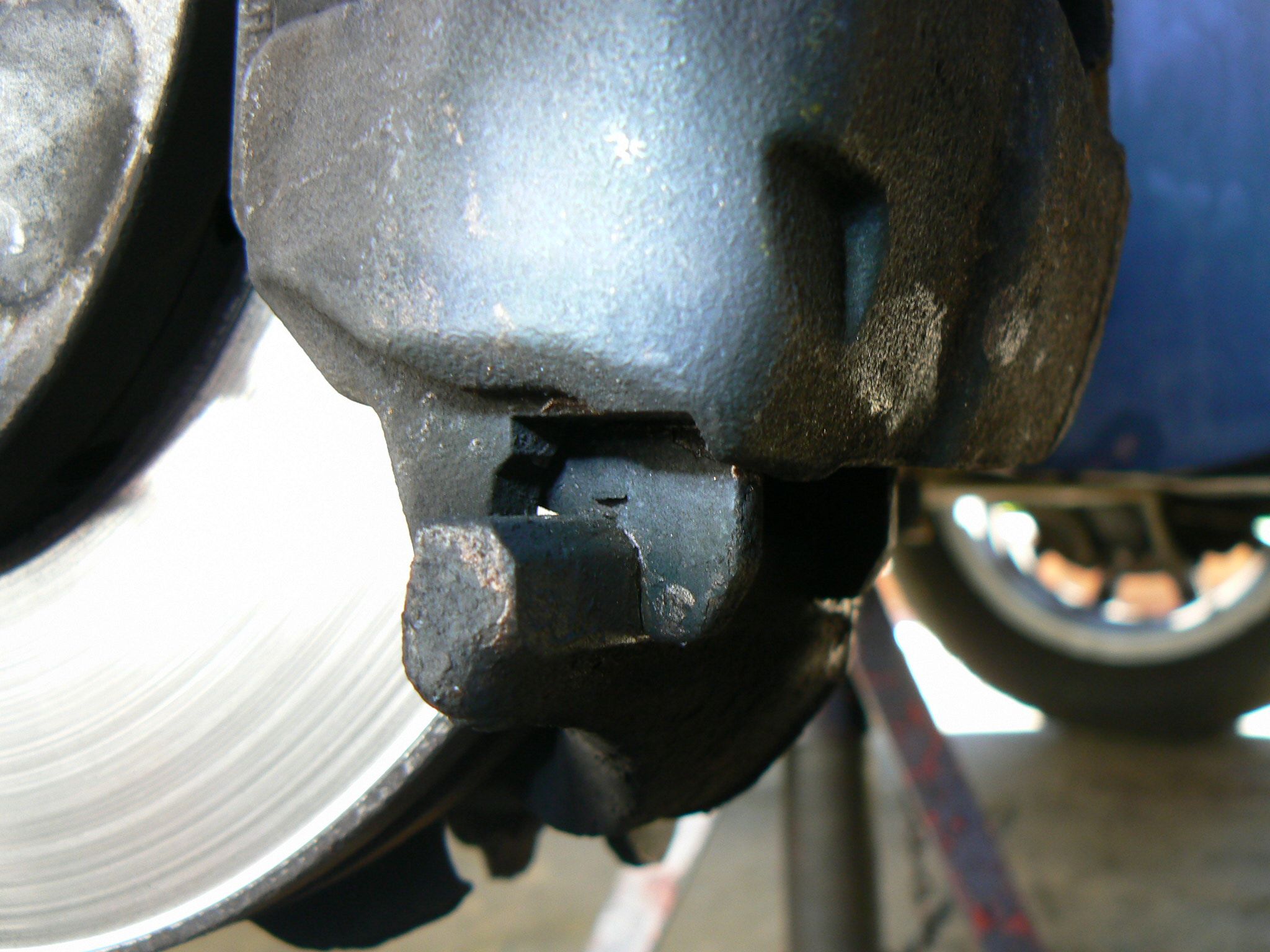 Then I remembered that I've been noticing for some time that when I'm leaving my boy's house - and I have to reverse for a short distance when doing so, that there is a small clonk/clunk as I apply the foot brake to stop the car reversing any further. Looking at the above pictures the DOR is clockwise when going forward so that gap situation is logical considering that I'd last been traveling in a forward direction so when I'd brake the vehicle to a stop the disc would have been trying to force the pad downwards. Could this be the pads gripping the disc and moving upwards to close that top gap when reversing? So how "loose" is this effect I wondered? So I took hold of the caliper and tried lifting it (ie as if rotating it anticlockwise around the hub) and Geronimo, the pad moved up so that there was no gap at the top and the gap is now at the bottom! I quickly nipped round and whipped the N/S/F wheel off and was greeted with the exact same "problem" although the gap is "only" about 28 thou on that side. Remember these caliper slider pins just run in rubber bushings so there is considerable compliance.

Guessing I'd found my problem I stuck both front wheels back on and drove round to the lockup garages near me where I know I can mess about without upsetting others. I arrived going forward so when I braked the pads would be "leaning" on the bottom rail of the caliper/pad carrier with the gap at the top - as in the first picture. I then reversed and firmly, but not violently, applied the foot brake and was "rewarded by a "clunk". I got out and looked at the O/S caliper through the alloy spokes and could see the gap was now at the bottom. Went forward again, braked, clunk, and the gap is back at the top. Observations on the N/S/F revealed it to be behaving the same.

Then I took off to a section of local road I know well which has a lot of wee potholes and "irregularities", waited until the traffic was quite - it's quite a quiet road anyway - and drove over the "bumps". There were all my usual clonks and clunks sounding just like a well worn drop link ball joint. I turned round and drove back over the rough section but this time used my left foot to press down firmly but lightly on the brake pedal. The first surprise was that the car stops responding to throttle input when the brake pedal is pressed - too damned clever I say and frustrating when trying to fault find like this - but also the clunks and clonks disappeared completely proving it's the pads rattling around against the caliper carrier rails which is making the noise. As this caliper design has no anti-rattle shims The only "cure" I can see for this is either to weld on a bit of metal to the pad backing metal and hand file it so the gap is effectively eliminated - but I'd worry about heat damage to the pad bonding resins? - or just fitting a new set of pads. As these pads are only a bit more than half done I think I'll just live with the clonks for a while longer as I'm probably going to do pads and rotors at next year's service.

I talked about suspecting it was going to be drop links and i was thinking that primarily because that was quite what it sounds like but also because worn drop link ball ends are a very common failure on many vehicles these days. I'm raising this because, as our more experienced folk will know, it can be very difficult to diagnose a worn drop link because the anti-roll bar can apply tensioning pressure which can effectively stop you feeling any free play in the ball joints. If you are going to have any success feeling for wear in a drop link ball joint you've got to eliminate the tensioning effect of the antiroll bar. Because it's connected across the car to both bottom suspension arms you will never feel a worn joint if you jack up just one side of the vehicle because the jacked side will be in full extension and the side still on the ground will be in compression thus "twisting" the anti-roll bar. The bar is very strong indeed and will resist being twisted so you'll never feel any play in the ball joints on the drop links. So the minimum condition for checking needs to be with both front wheels off the ground hanging free. Sometimes though this will not properly free up the tension so you need to also slightly jack up one side, then the other, whilst checking for play. You can often feel when all tension is relieved because the drop link becomes much more easily manipulated than when tension is trying to ether compress or extend it.

When you are doing this jacking up there are a few things you need to consider. The most obvious place to jack on is the bottom suspension arm or it's ball joint - DON'T DO THIS. Ball joints are made by machining a seating in the joint's cast body then inserting the pin of the ball through the joint until the ball itself comes to rest against this machined seating. Some grease is then introduced and a nylon type backing pad then the whole thing is closed off with a relatively thin metal cap which is peened into place thus slightly compressing the nylon and ensuring no free play in the joint. If you jack on the arm or the joint itself you stand a good chance of damaging the metal cap or even popping it out altogether thus scrapping the joint! I prefer to go for the hub in some way, on the Ibiza there is a very convenient space in the bottom of the splash guard which allows access to the bottom of the disc so I usually jack it there: 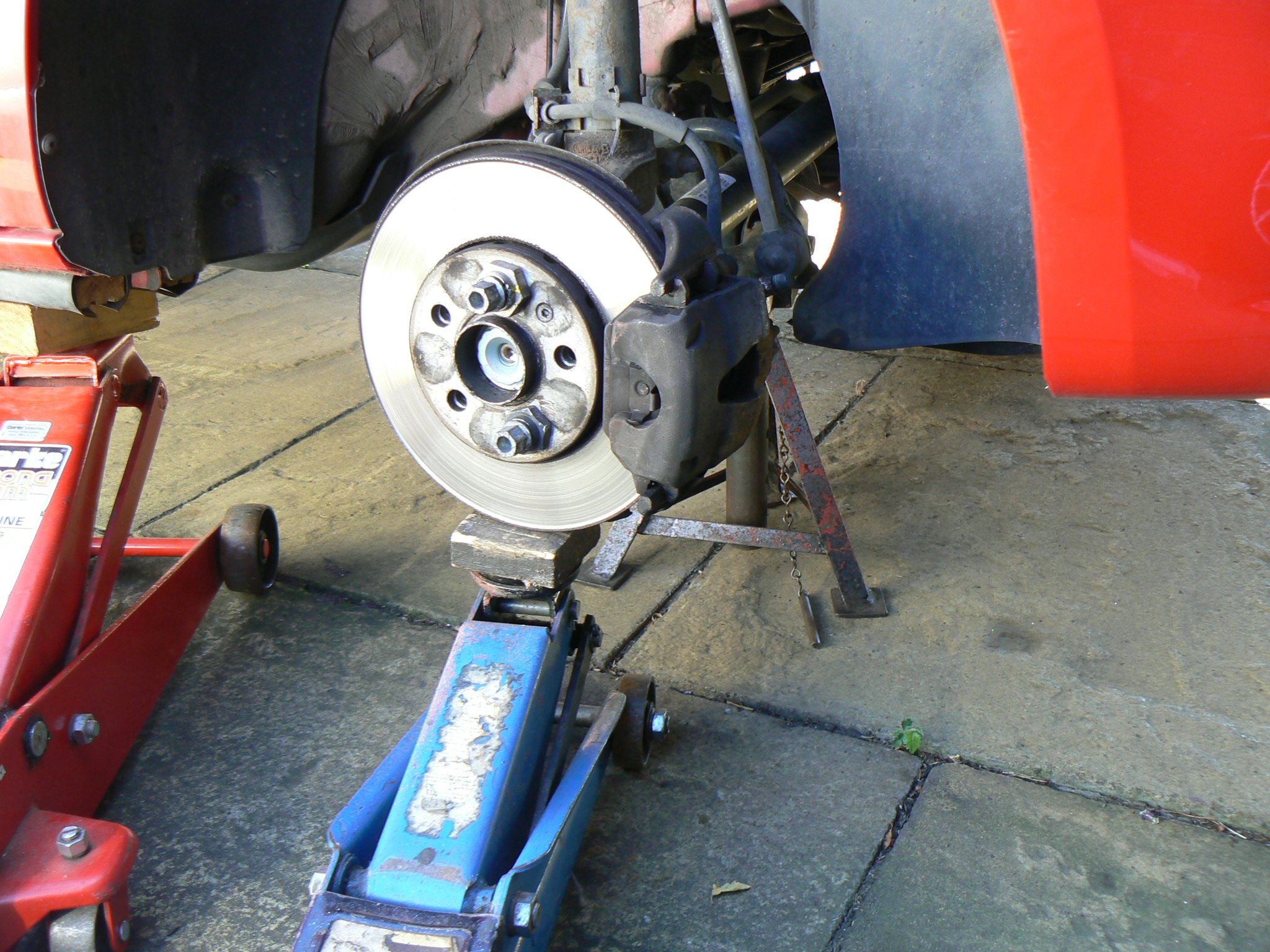 From the back you can see the accommodating gap in the splash guard: 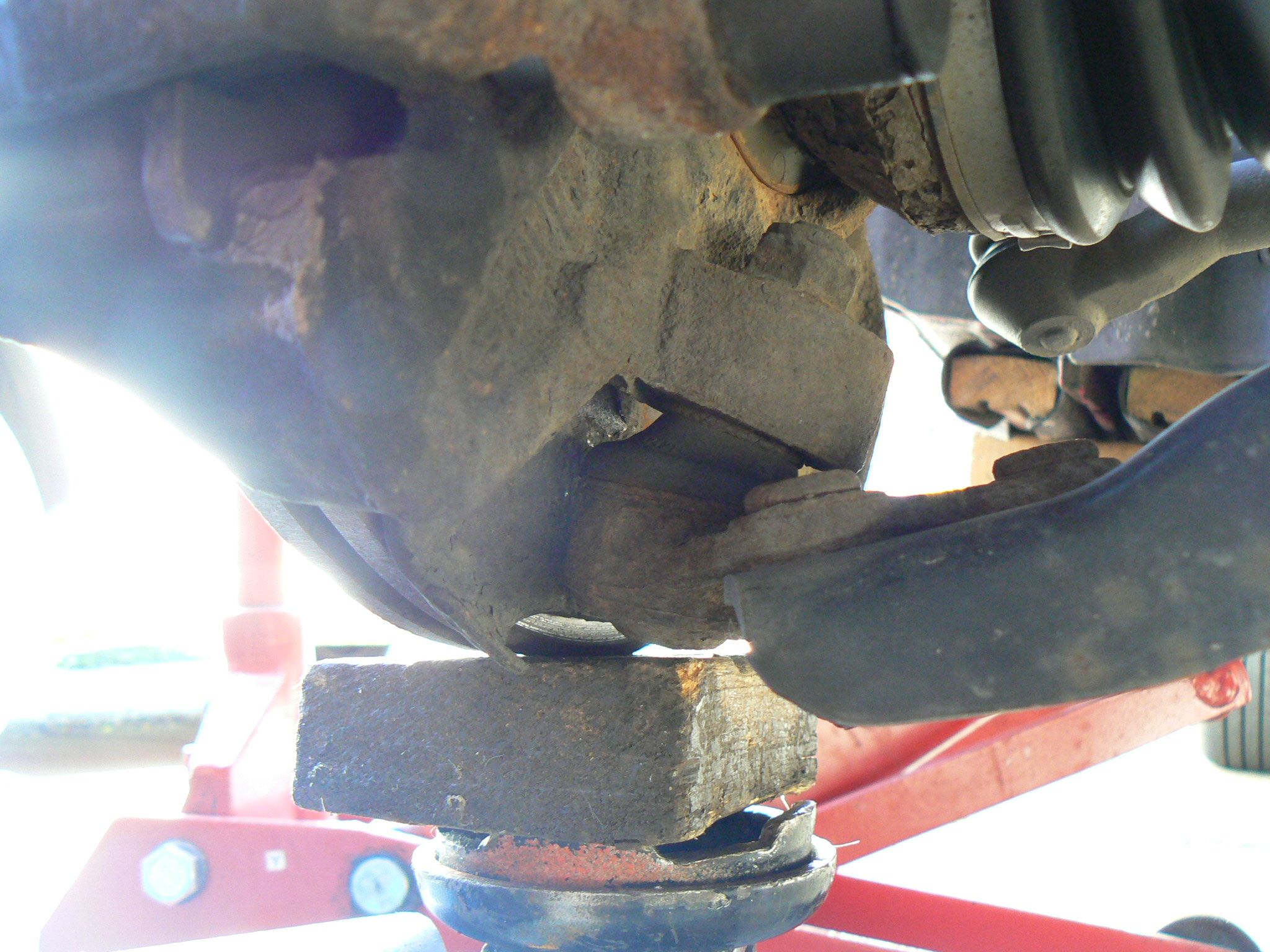 And, of course, the block of wood is to prevent the jack's saddle marking the disc.

You do need to be a little careful that the disc doesn't rotate when you're doing this as it will fall off the jack and you don't want to jack it up very much, mostly because it won't require to be jacked up much to equalize the tension side to side but also because you don't want to knock the whole car off the axle stand - Safety first! I also use a couple of wheel nuts with spacers - they're actually old rear axle nuts - to make sure the discs, which are held to the hubs with just one wee screw, don't shift on the hubs while doing this: 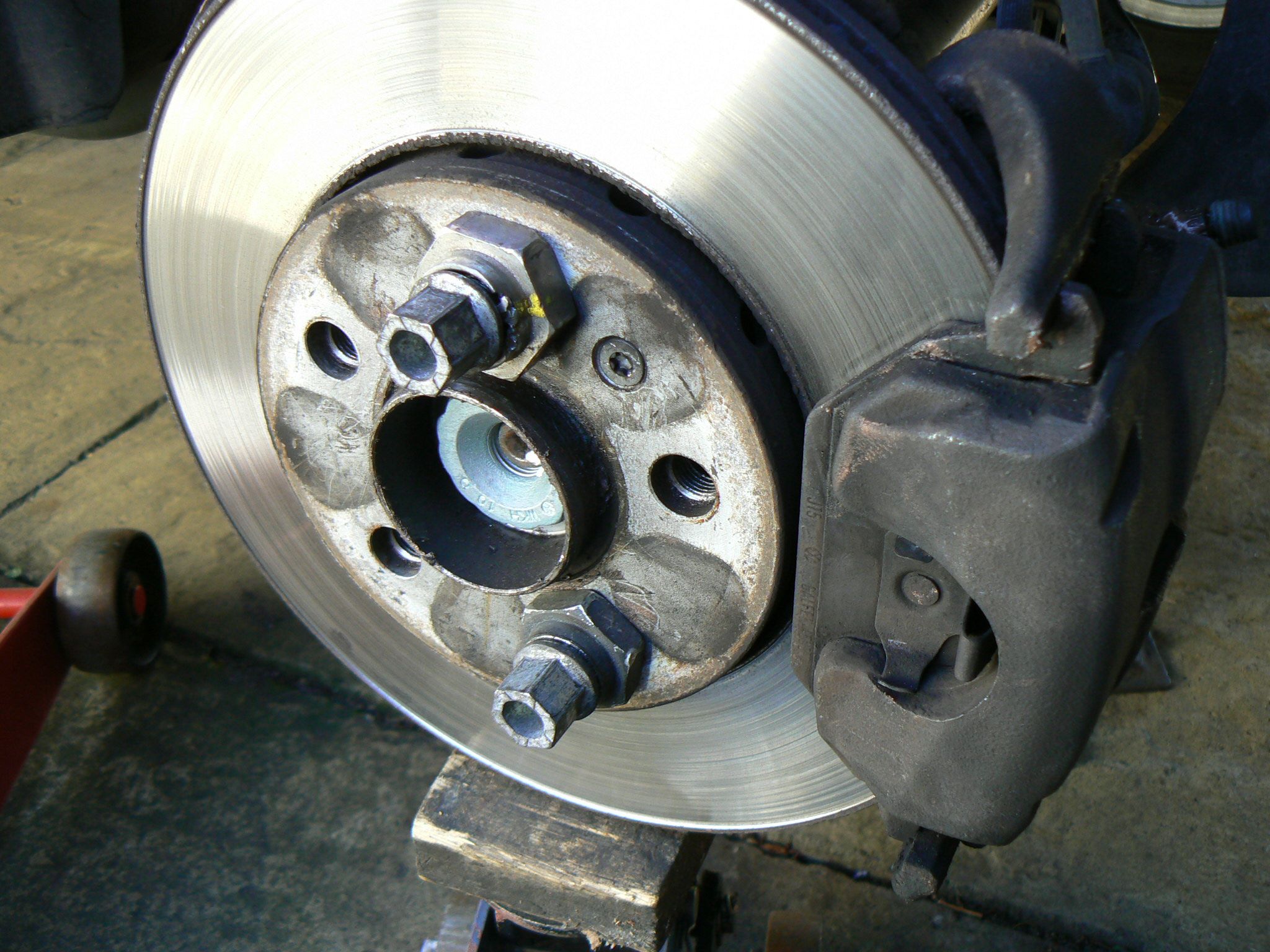 I started to talk about drop links etc but it's made the post too long so I'm going to try to cut and paste to another post after this one. Anyway, hope this has so far been of help to those with mysterious clonks/clunks and rattles?