Fast estate cars.  We’ve driven the Leon ST FR, fast yet practical.  Surely that’s enough power for any family load lugger?  SEAT thankfully doesn’t think so and we now have the third and final member of the SEAT Leon CUPRA family, the Leon ST CUPRA 280 (and 260). 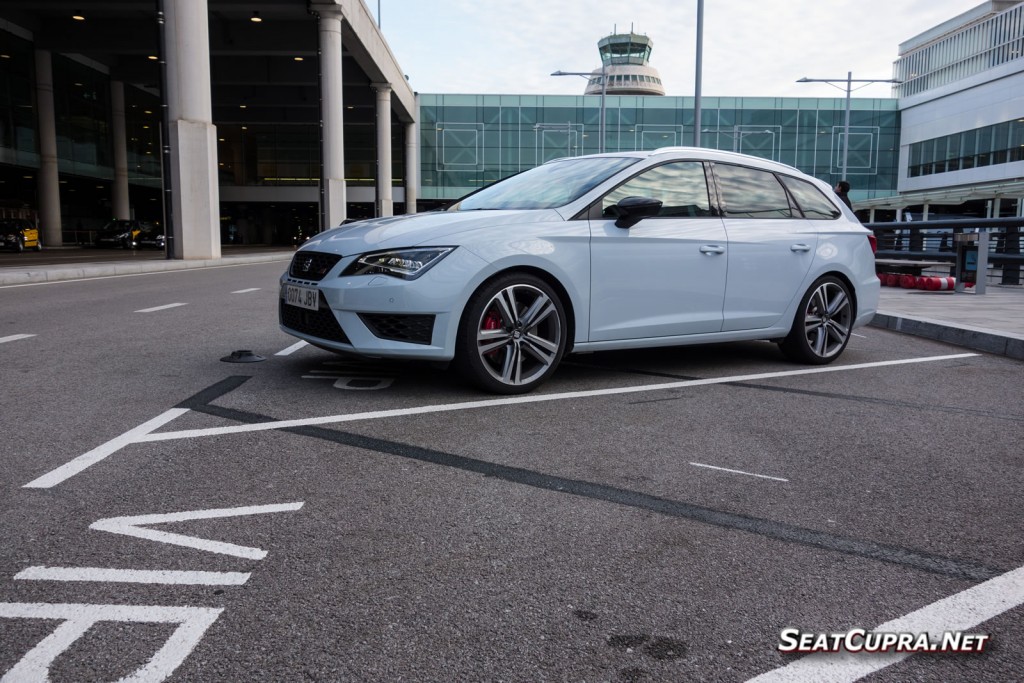 A 280 HP estate with SEAT’s magical front mechanical differential lock and Dynamic Chassis Control means you really can have a car for all occasions; family wagon and track beast as we found out in Barcelona. 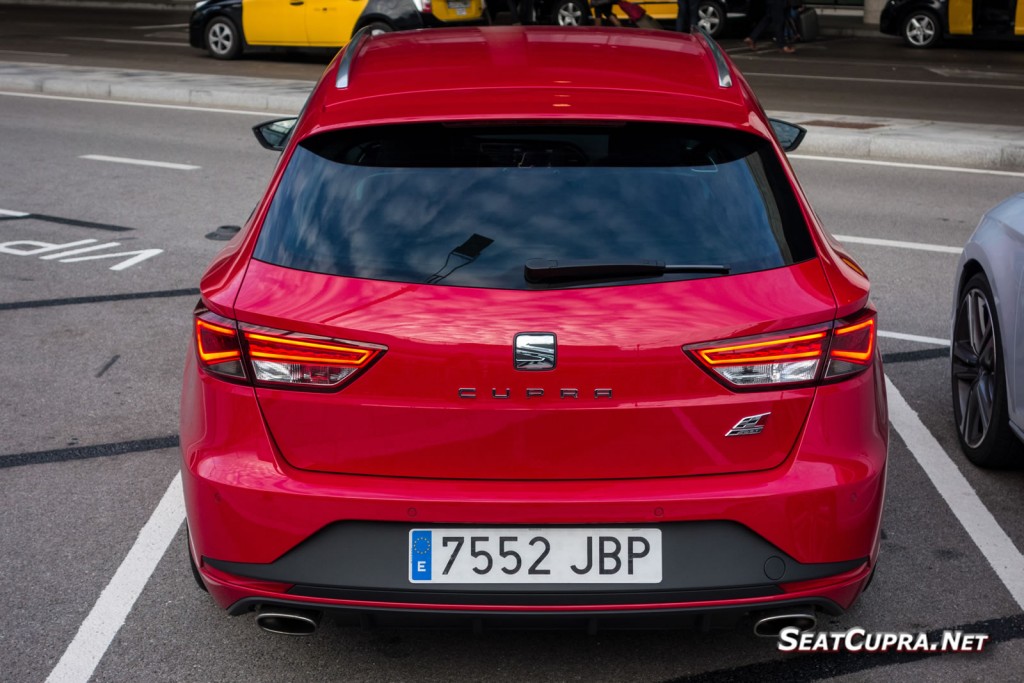 I am fortunate enough to have owned the 280 SC DSG model for just under a year now so I can give a view on how the estate is in comparison.  I’ll cover that a bit later in this review.

Summary of the car

Like its siblings, the ST is available in either DSG or Manual and we drove both on road and track. 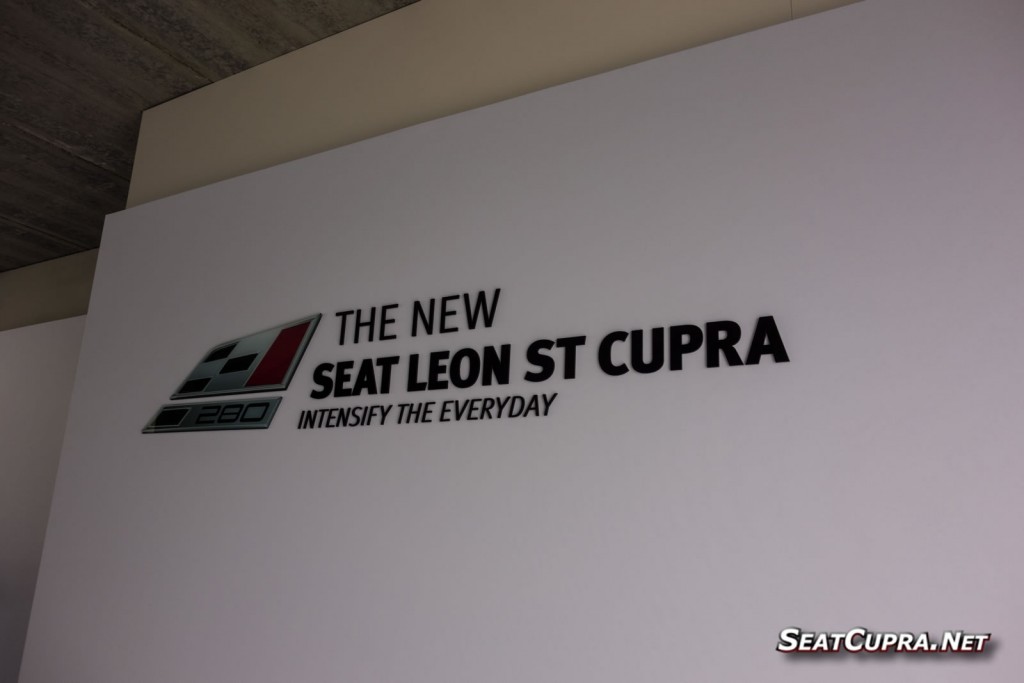 The extra length and weight means a performance drop of 0.2 seconds compared to the five door with the ST completing the 0-60 run in 6.0 seconds (DSG) and 6.1 (Manual).

The all important boot space has a capacity of 587 litres, which rises to 1,470 with the rear seats down.  Like we showed on the FR there is a nice quick release mechanism to drop the seats from the boot. 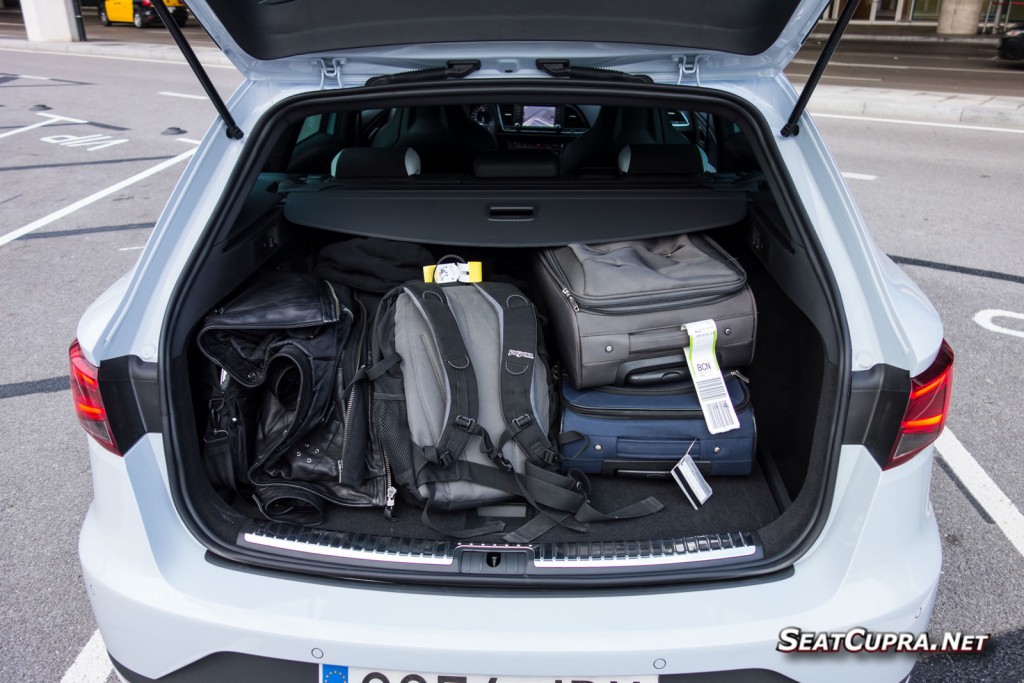 The interior is the same as the other CUPRA models and there are the same options available such as the Sub8 performance pack, bucket seats and the white, orange and black packs if you want to add some more bling. There is also the SEAT sound kit if you want to upgrade the sound system.

There is now a new option called the “Navigation System High” which at £930 brings a high resolution display to the main console screen as well as SMS Messaging, DAB Radio, 10GB Jukebox, a picture and video viewer and voice control.  It also had the Android mirror option available but I didn’t try this out. 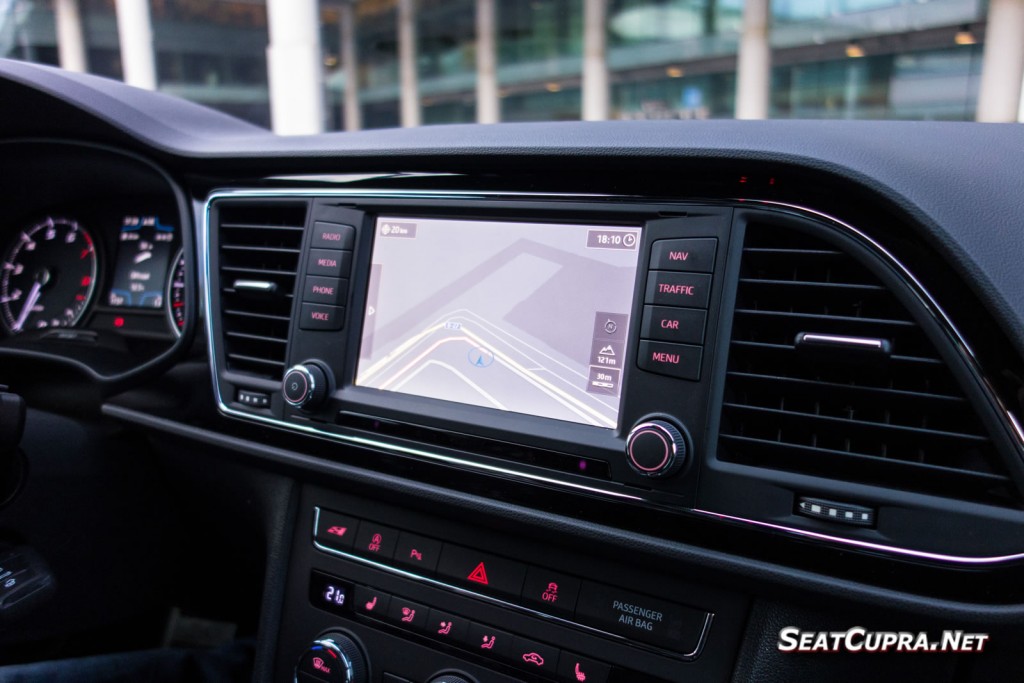 Some of the cars had an extended sun-roof which ran the full length of the car.  This looked great from both inside and outside.

There were some 260 models at the launch however we don’t expect these to come to the UK unless someone specifically wants one.

I first got to drive the manual car on the roads.  This car had the bucket seats, which are nice and supportive although I still personally think the standard seats are fine unless you are a regular track user. 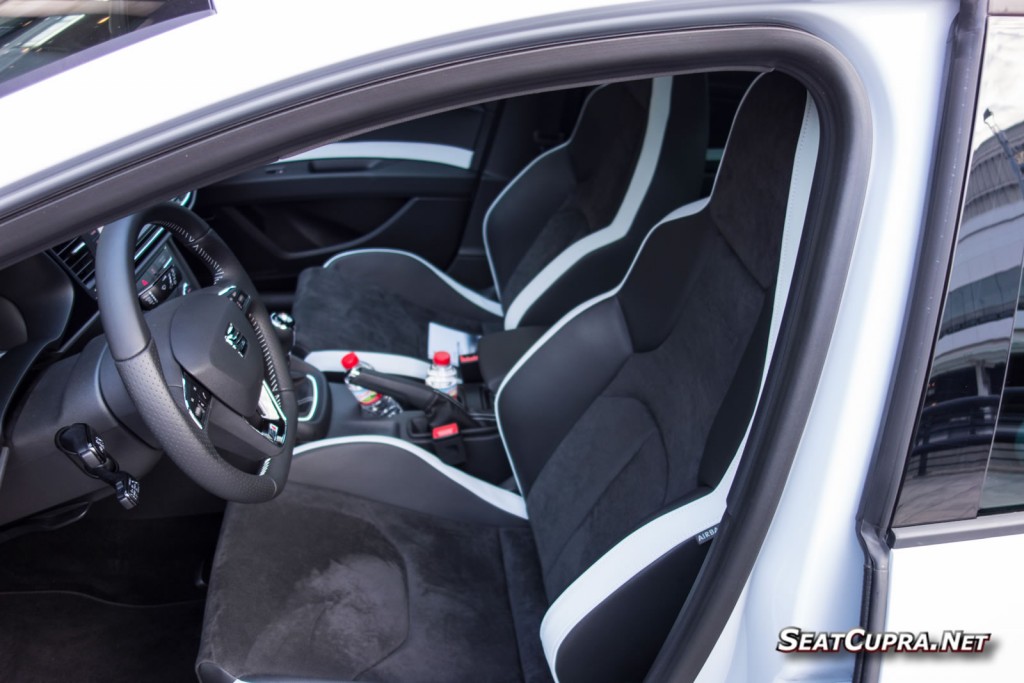 As is often the case with the press cars, most of the options boxes are usually ticked and this car was no exception.  It looked great in red with the standard 19″ CUPRA wheels. 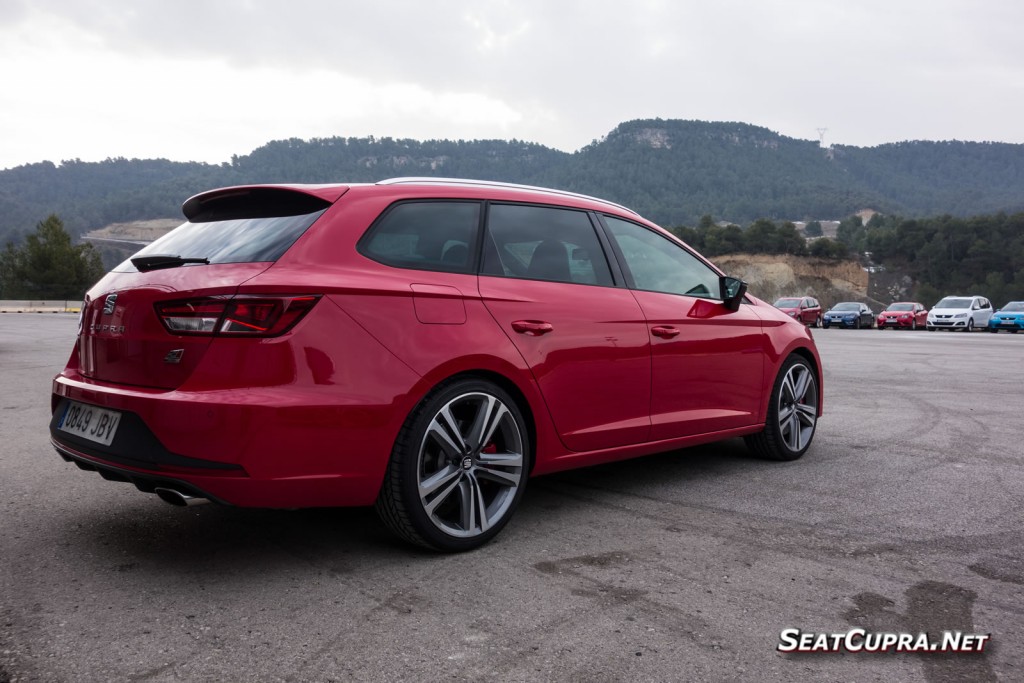 I could subtly notice the extra dimensions of the car when on the road, but only marginally so. It certainly didn’t feel like I was dragging any extra weight around.  The journalist I had paired up with said quite often the rear suspension on estates are stiffened slightly to balance the car more and he was convinced the same had been done to the ST here. Not a negative thing, just an interesting point to note.  It certainly didn’t feel any harsher than my car, if anything a little bit more composed due to the extra length and weight. 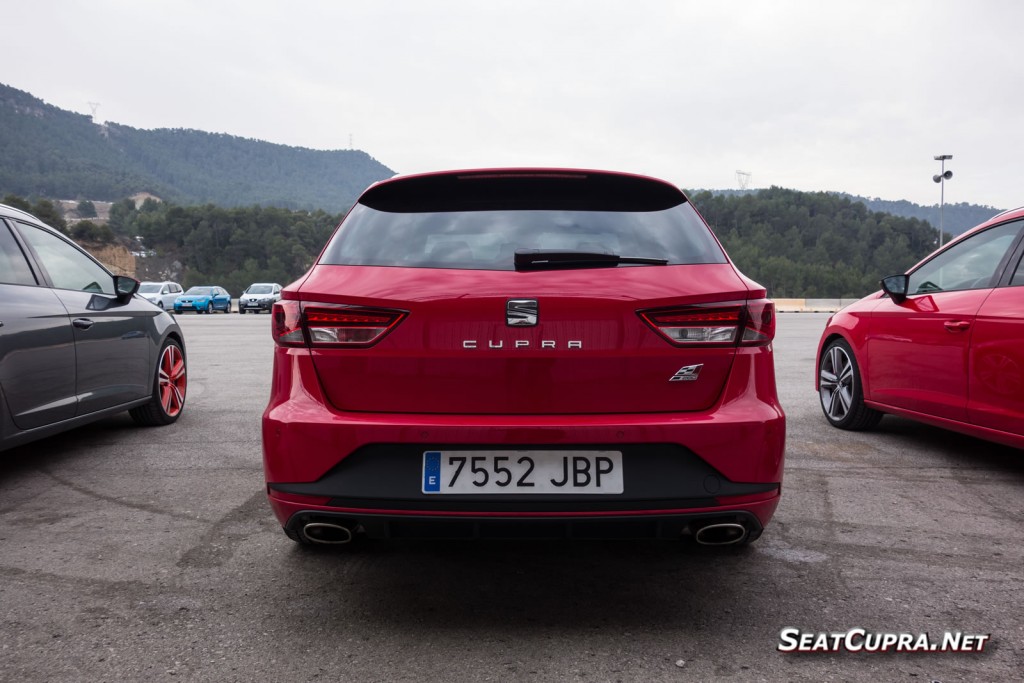 We drove the ST to the Castellolí circuit ready for the press briefing.

SEAT are doing really well – 2014 was a great year

At the briefing we heard that in the UK sales growth is 16.8%.  In worldwide sales the Leon family now accounts for 39% of sales against 38% for the Ibiza. A big shift compared to 2011 where Ibiza accounted for 55% of sales compared to 22% for the Leon. Whilst the customer satisfaction across the entire model range is similar, the CUPRA models come out on top.

After a couple of worrying years for SEAT, the new Leon has clearly turned the company around and they are no longer at risk delivering strong sales and broadening the range with more to come later this year and next. 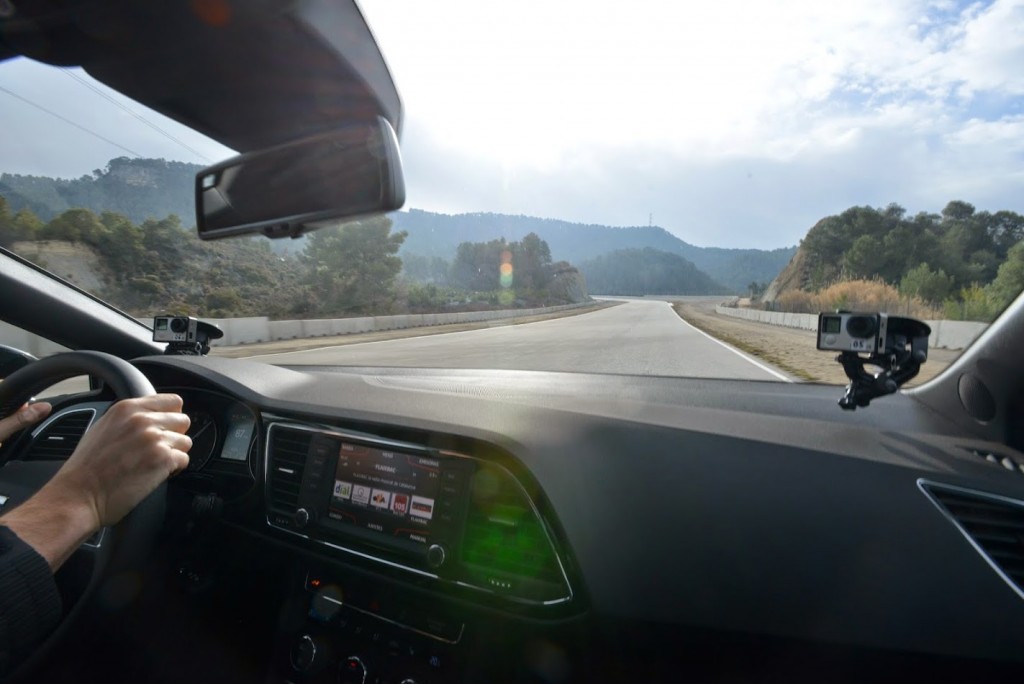 All the track cars available to drive were performance pack versions.  I have to say the new wheels look great in the flesh, as do the Brembo brakes. Interestingly, the calipers on the standard cars look a bit different to mine.  Not sure why they have changed, but there are certainly some minor structural differences to the housing.

There were four cars lined up behind the pace car which was a dark grey Sub8 SC.  The track cars were all dynamic grey (the off white colour). 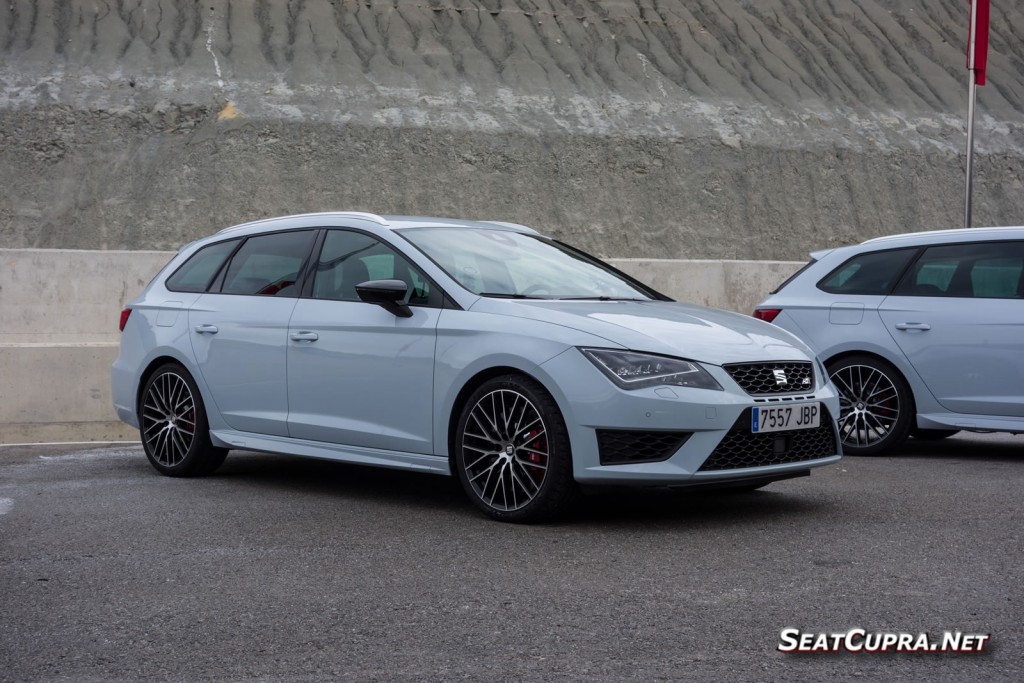 I was lucky enough to be invited to the CUPRA launch in 2014 and drive the ST’s siblings on the same circuit and also at Silverstone last year, however I can’t claim to be an experienced track driver by any stretch of the imagination. 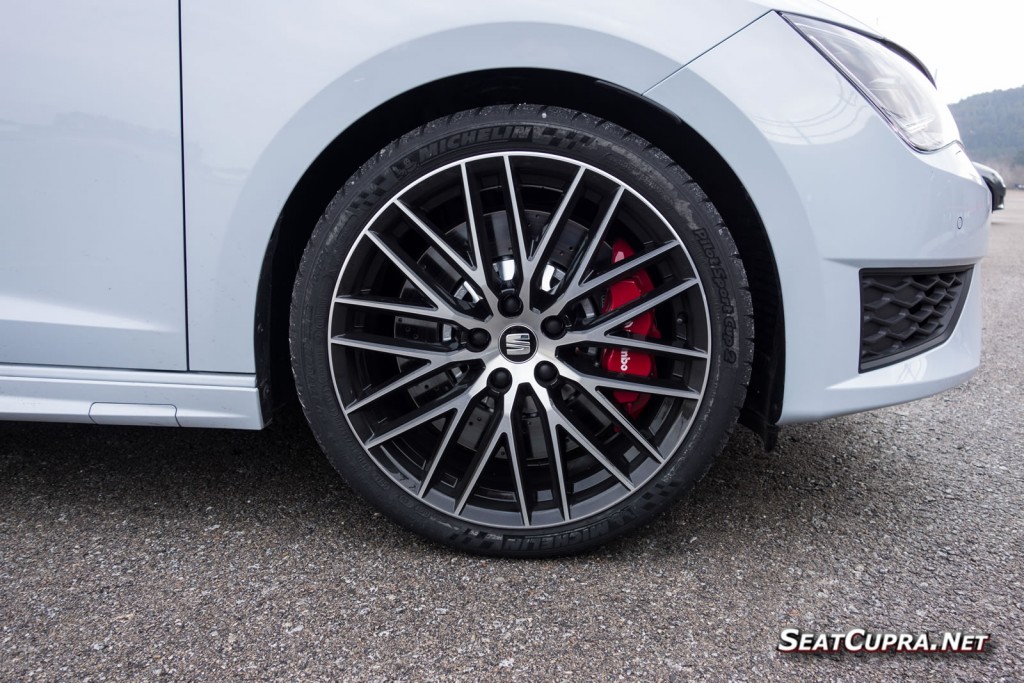 I also had SEAT’s photographer with me in the passenger seat and he took the in car track shots you can see here.

The car was in CUPRA mode of course and Sport selected on the DSG.  For those of you that have the DSG models you will know that the Sport mode really is unusable for everyday driving unless you like the car to be screaming at you at high revs all the time.  It is, as you would expect, meant for times like these. 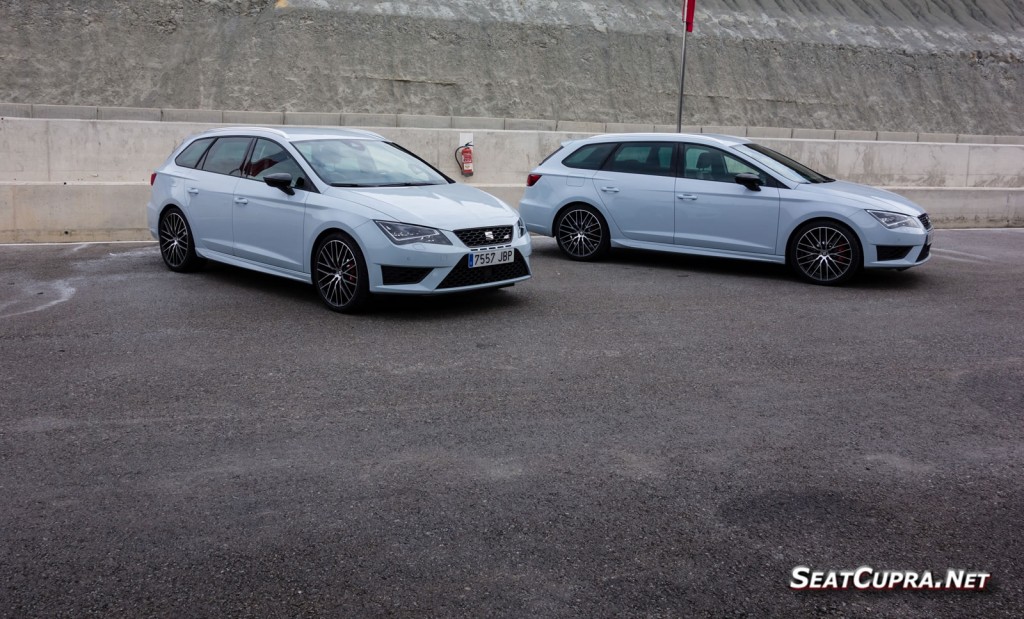 Once the warm up lap was out of the way (still at a reasonably fast pace) I had a chance to stretch the cars legs.  My initial thoughts were how similar it felt against its smaller family members.  It did not feel like I was in an estate at all.  I am sure the more seasoned journalists will notice more of a difference but I can honestly say this felt just as fast and just as agile. 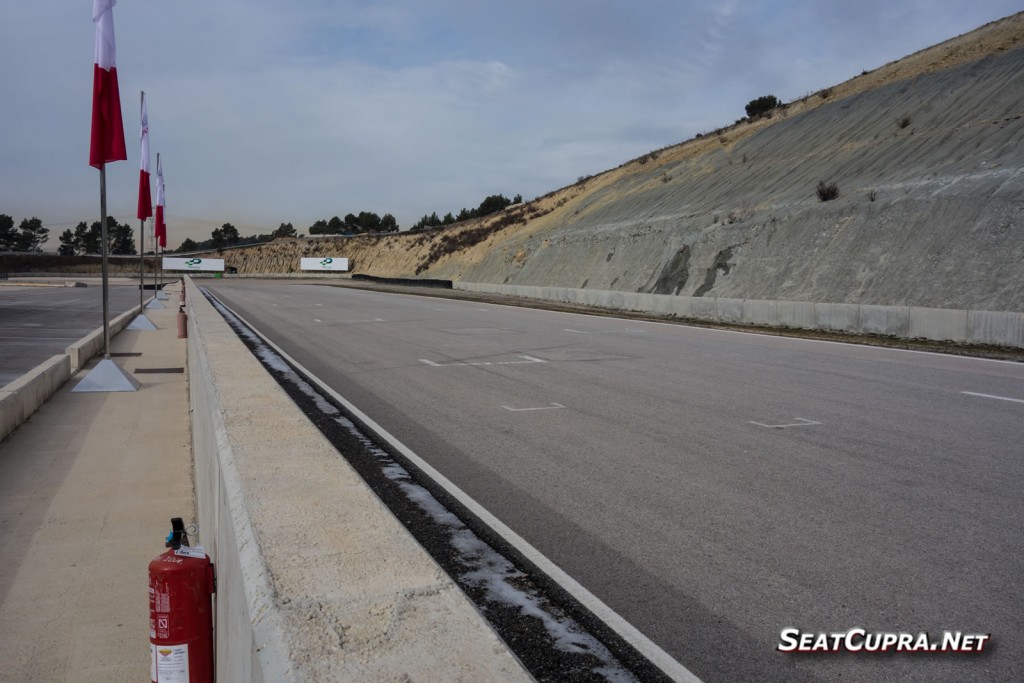 There is the slight caveat that when I drove the other CUPRA cars on track they were standard models with the heavier wheels.  I’m guessing the reduced weight of the Sub8 kit on the ST goes some way to cancel out the extra weight of the car caused by the increased size.

The differential lock worked its magic and the car still allows you to hammer it through the bends, floor it and the car doesn’t even squirm.  The Brembo brakes felt great, not drastically different compared to mine, but I’m sure they would allow more punishment on repeated track use and these cars certainly were being driven hard, days on end.  Of course the tyres were the semi slick Michelin Pilot Sport Cup 2s and whilst it was very cold and there was some snow still lying at the edges of the track they gripped very well. 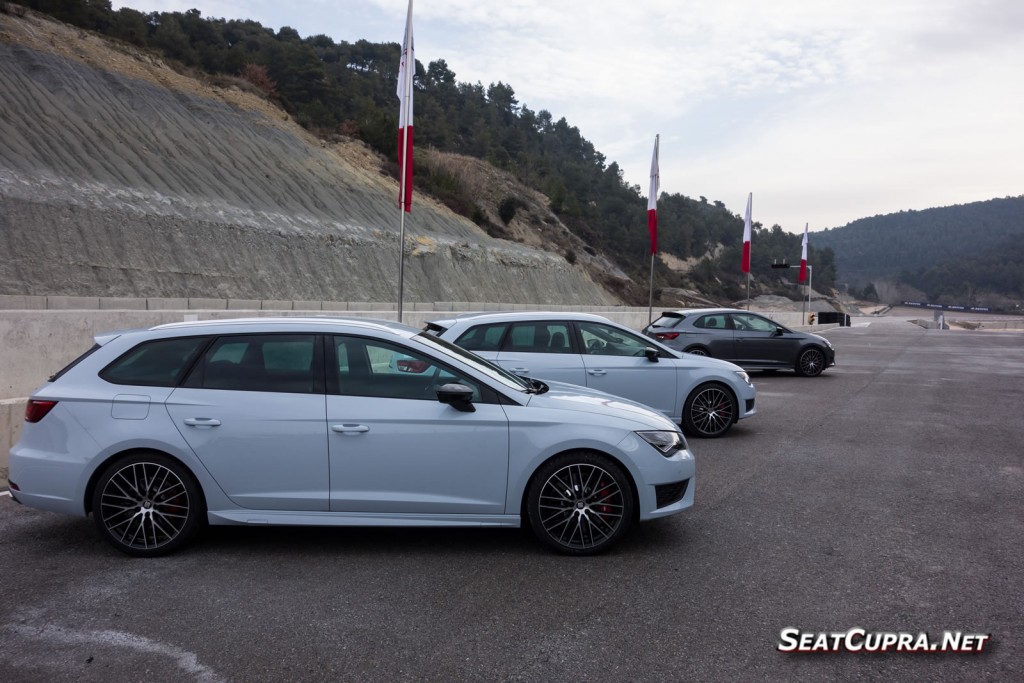 After the wind down lap we headed in for lunch and to wait for the chemical dust cloud to dissipate that caused us some concern for a while.  We could see it from where we were and saw on the news reports what had happened.  We thought at one point driving would be cancelled as they were closing roads. Luckily it cleared and we were let loose again. 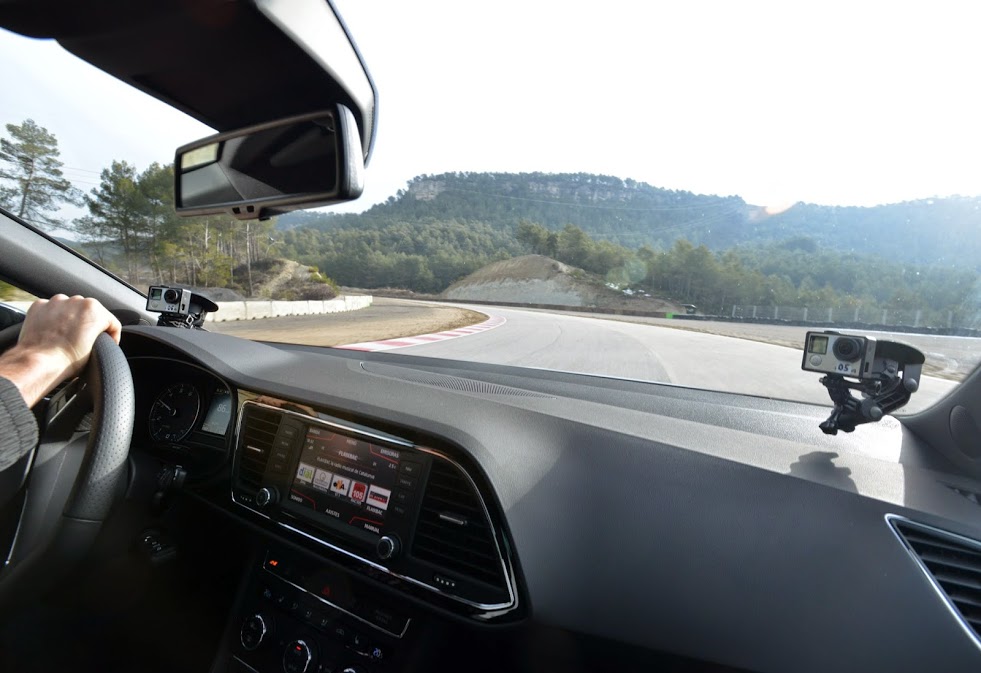 After lunch we headed out for another road drive. This time we had swapped our red model for a DSG car.  The car was dark grey with the Orange Line pack. 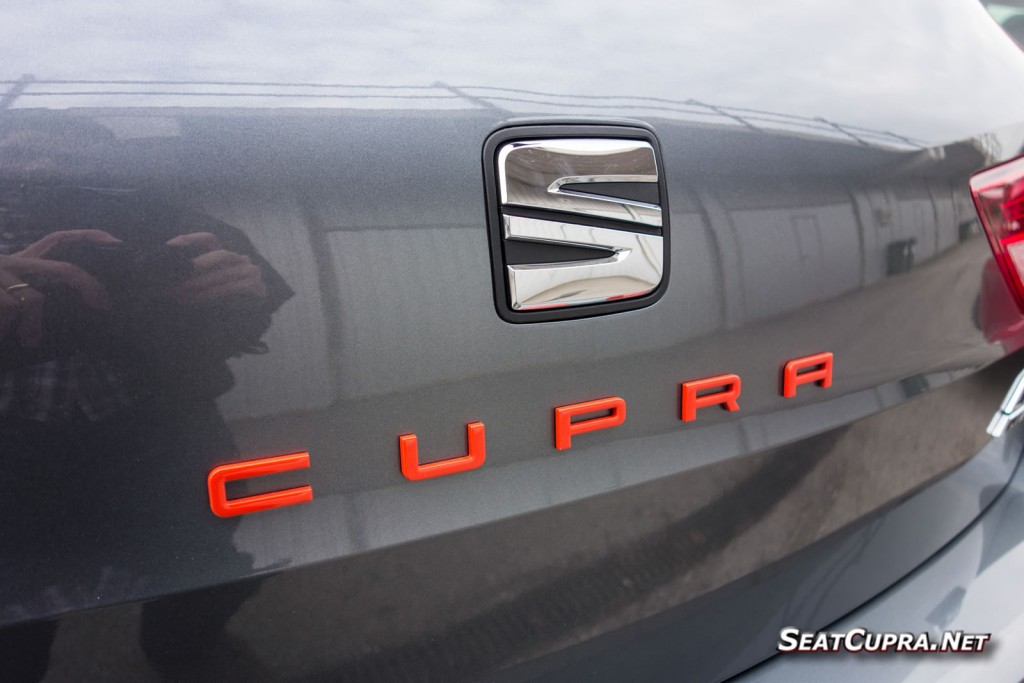 I have to say I thought the orange accents were nice on the front grille surround, the mirrors and the rear lettering against the grey, but the stock wheels with the orange didn’t look very good at all in my opinion. The orange and silver just didn’t look good together.  Having seen the Sub8 wheels with the orange highlights in pictures that is a whole different kettle of fish however – they look great. It’s shame they didn’t have any Orange Line Sub8 cars on the track, it would have been nice to see the orange highlights on those wheels in the metal. 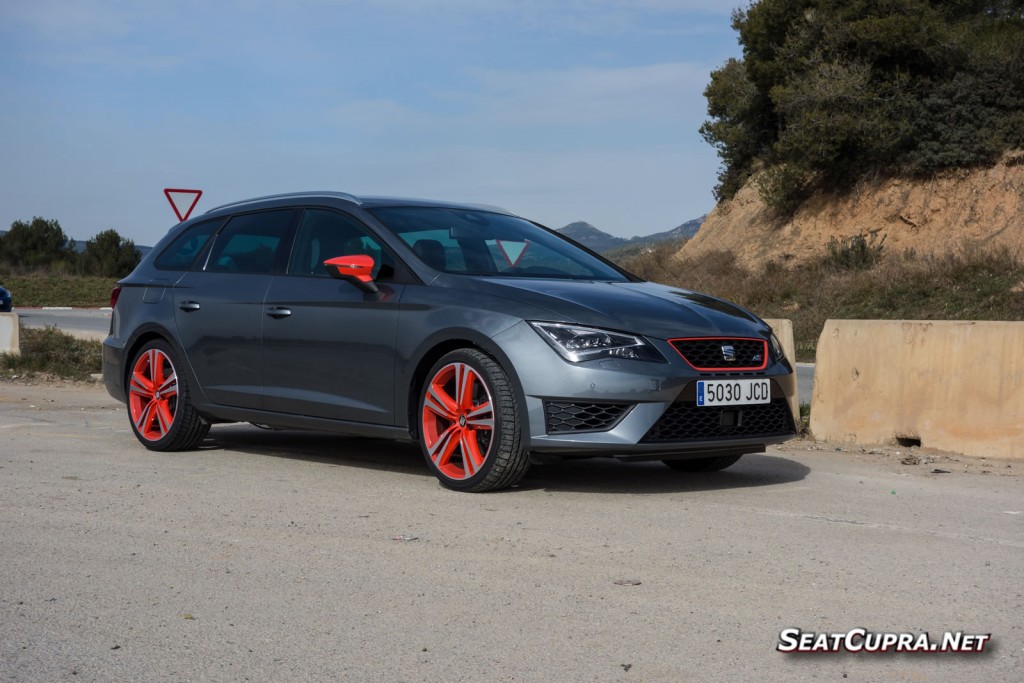 This drive took us on a 40 minute loop that involved driving in all different conditions, motorway, town and windy hillsides.  Luckily I had the second half of the drive which was mainly the twisty bit and the car felt just as good as the manual, and again just as good as my SC. 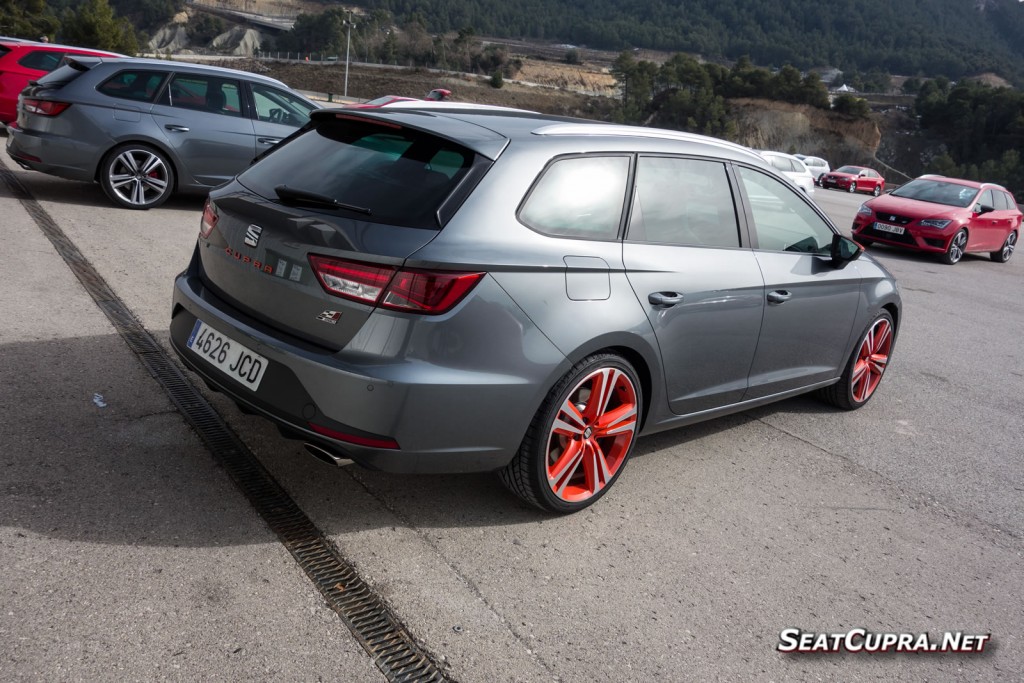 After returning to the track and grabbing some more delicious vacuum sealed food to eat I was keen to get one more track run in.  It was interesting to see the journalists lining up for multiple drives and there was never a shortage of someone wanting to go out again.  I have only been to SEAT media events so can’t compare, but I got the impression many of the journalists there had a bit of a soft spot for this car and for the SEAT brand as a whole. 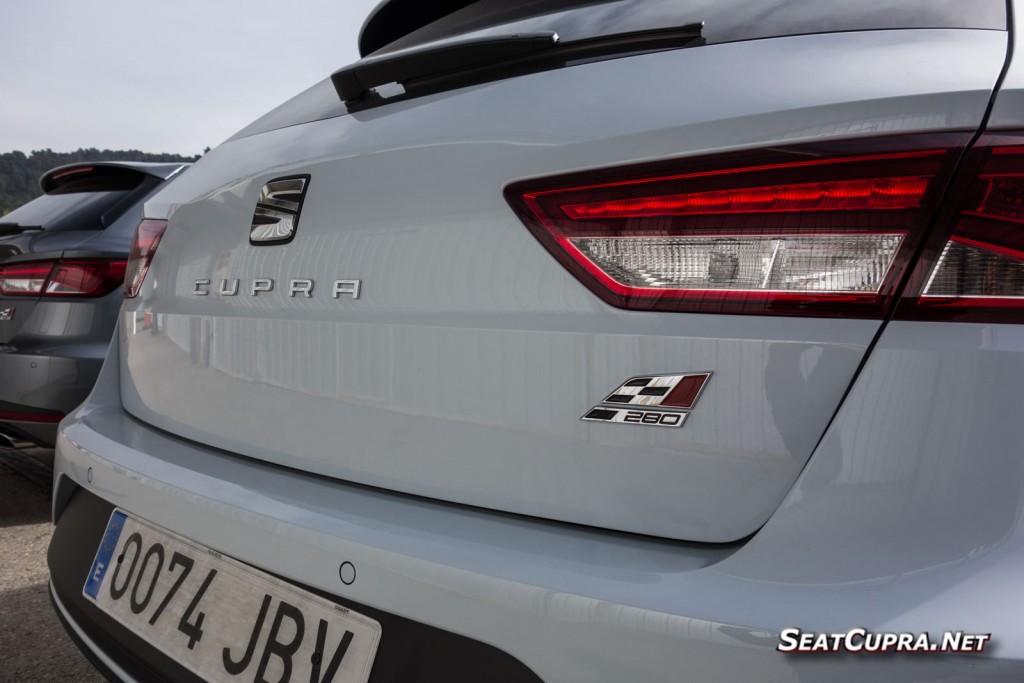 I was driving the same spec car on the track as before and other than the fact that the pace car and the journalists in front left me behind, I still had a great time zooming around at my own pace.  As I had no sight of the pace car I mistakenly came off a lap early, much to the confusion of one of the journalists who had started in front of me and returned to find me in front of him in the pit lane. 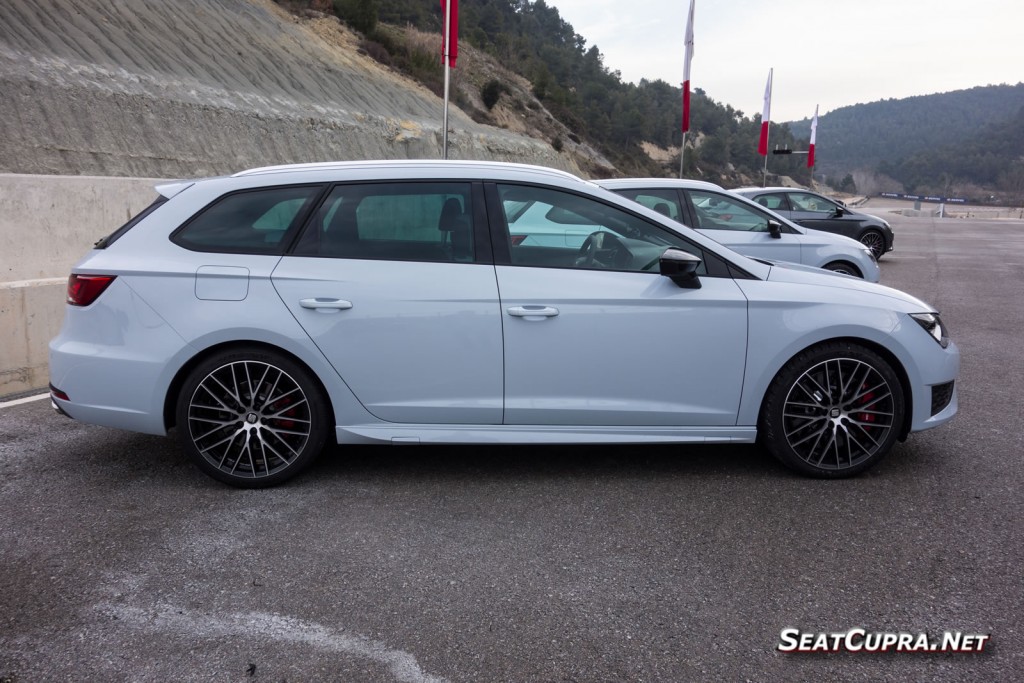 Prior to the event I had asked SEAT if they could pass some questions on to Jordi Gené for him to hopefully reply to by e-mail as we weren’t sure if he was going to be at the launch.  Luckily he was there and had been taking people for hair raising laps round the circuit, eating through sets of tyres in the process (as shown in the picture below!)  He was going sideways and using the hand brake with four people in the car. As you would expect, over time the tyres weren’t too happy about this treatment! 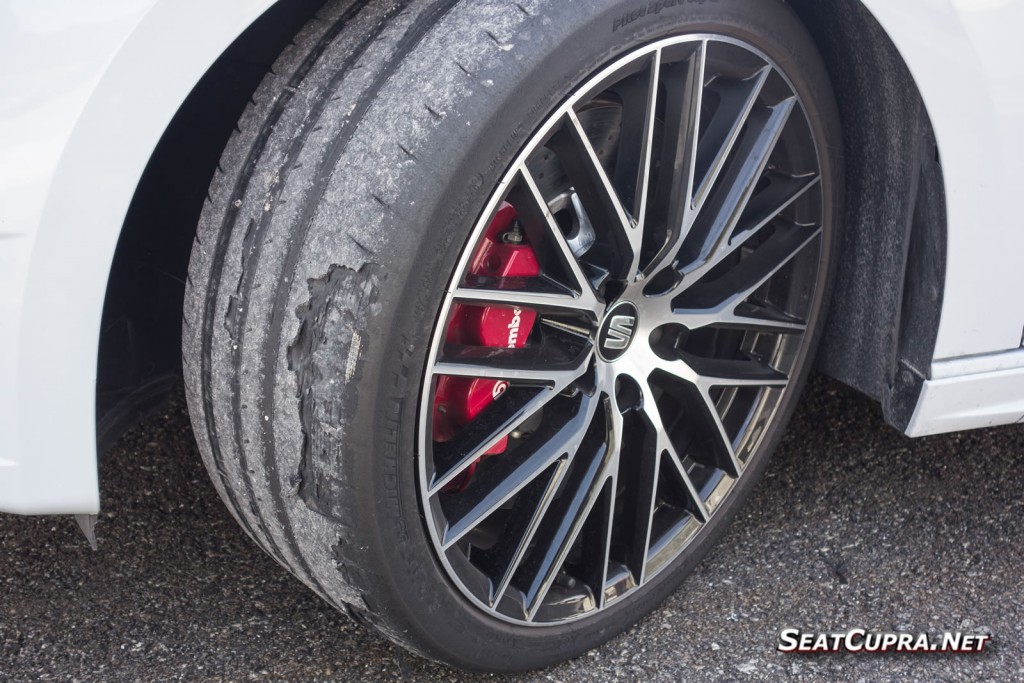 I was fortunate enough to be driven around Silverstone by Jordi last year in a Leon Cup Racer and after having just had two chocolate cakes I decided to just sit with him in the car whilst stationary this time. Luckily he was willing to do a video interview which you can watch below. Thanks to SEAT for organising this and for Jordi for taking part and giving us an insight into the CUPRA’s DNA .

The Leon CUPRA family really now is complete.  This is the first time we have had more than one variation of an extreme SEAT model.  Choice is a great thing and there really is a car to suit all cases here.  Taking the estate over the three door SC does not mean making any real compromises.  You can have your CUPRA cake and eat it too. 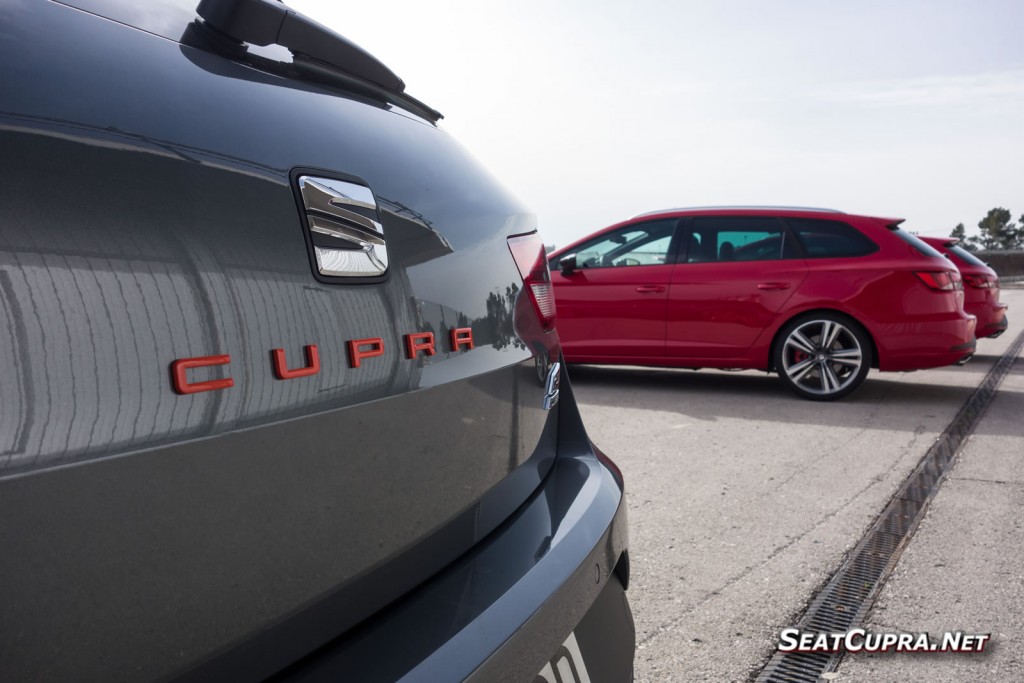 The car looks great, one of the best looking estates on the road, and is also one of the fastest into the bargain.  With the price difference not being that great between the body styles I do wonder if the ST will now take future sales away from the five door model. Whilst they all look great, I think the five door takes third place when it comes to looks now we can see all three models in the line up. 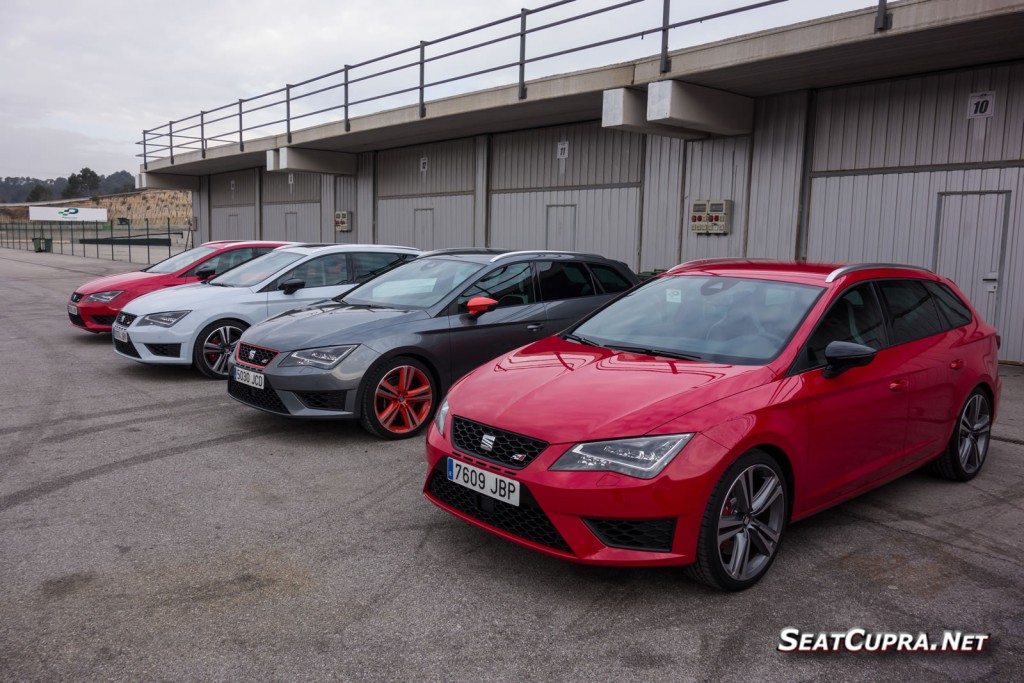 An estate car that can hammer the track at serious pace whilst remaining composed and can also take the family on a holiday with plenty of space for your bags, what is there not to like about this car? 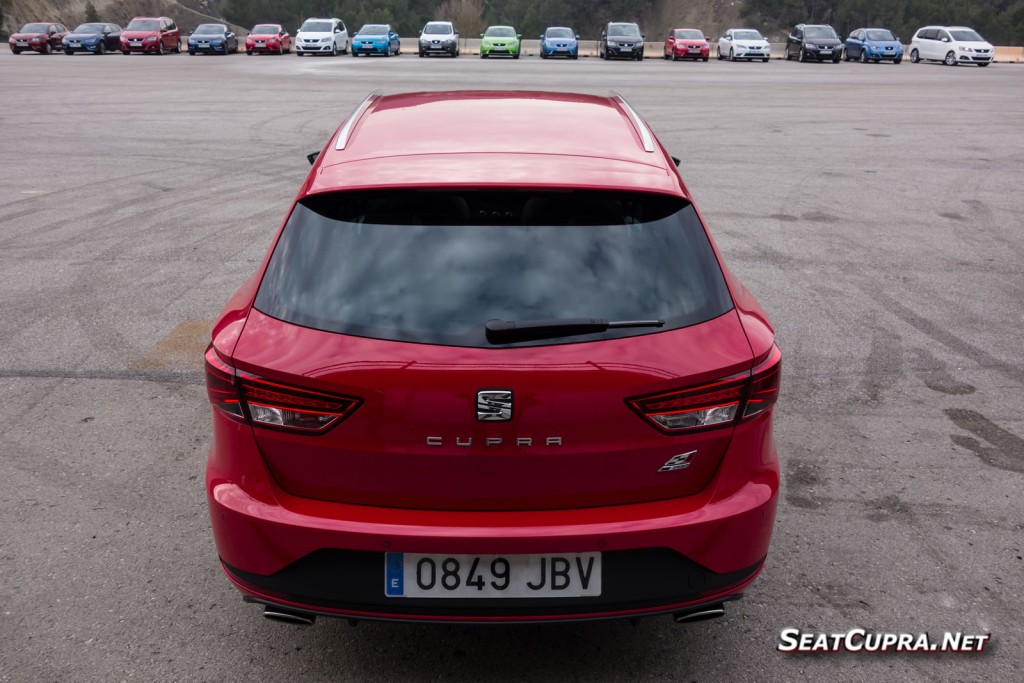 We don’t normally give star ratings here at SEATCupra.net, but here you go SEAT *****

As ever, a big thank you to SEAT for inviting us along and for their excellent hospitality.