Hi all, I have a 2016 Seat Leon, and last night I had a flat, the guy came out, I know the guy. changed tyre and said to me to take back to pergeot where I bought it as the alloy are corroding, paint flaking, ect. He said he suspects before they sold it they refebed them badly! Is this plausible and will they rix it? Starting to regret getting this car as had so many issues, unlike my older Leon!

He did note that one was caused by a curb and one a stone chip, but I have not curbed wheels since having car!

They will fob you off.

doesn’t look too bad. I wouldn’t be too concerned right now
Reactions: gamerdood123

@gamerdood123; how long have you had the car? If you bought it - say, in the last 2-3 weeks, then it might be worth taking back to the garage you bought it from, although there’s a good chance they won’t do anything, but no harm in trying - nothing ventured, nothing gained. However, if you’ve had the car a few months or longer, then the selling garage will probably maintain the damage that caused the corrosion has happened since your bought the car.

That sort of corrosion could easily have been prevented by the previous owner If the source of the corrosion had been spotted soon after it happened when the wheels were washed - spotting and repairing small chips and scratches on painted / powder coated alloys can be done easily using a paint touch up pen, provided the damage isn’t left unattended, when it could develop into a larger area of damage that requires a more extensive repair. It’s always worth checking the wheels and the car’s paintwork over each time you clean the car for new stone chip (or similar) damage and if there is any, repair it there and then.

The corrosion in the first three pictures on the wheel barrels was probably the result of careless removal of the stick on wheel balance weights by a tyre fitter when tyres have been replaced or repaired. That type of damage could go unnoticed if the wheel barrels aren’t washed when the car’s washed. The corrosion in the forth picture has probably spread from the small area of damage on the very edge of the wheel (either caused by a tyre fitter, or from wheel contact with a kerb) and the last two look to be the result of stone chip damage. Those last three - if spotted early on - could have been repaired and not developed into larger areas on corrosion.

Fortunately, your wheels aren’t diamond cut, so a DIY repair would be fairly straightforward if the Peugeot garage you bought the car from aren’t willing to get them repaired. Alternatively, you’d probably be looking at £60-£70 plus VAT per wheel for a good quality professional refurb.
Last edited: Mar 24, 2021

Firstly I'm unsure what diamond cut means, assuming that's when it's the 'stainless steal' look to it. I've had the car 6 months, done less than 600 miles and they've already had it back alot!

Is it something I should look at getting sorted? Or can it wait? I'm in the middle of moving house, partners changed job, so money isn't as common as usual!

Will it spread alot? Or will it just stay as it is now?
Thank you all for your help!

A diamond cut finish is where the whole wheel is painted or powder coated, and then the face is re-cut on a CNC lathe. This removes the paint / powder coat from just the face and leaves the rest of the wheel with the the painted / powder coated finish. After re-cutting the face, clear lacquer is applied for protection - like the mk3 Leon alloy below; 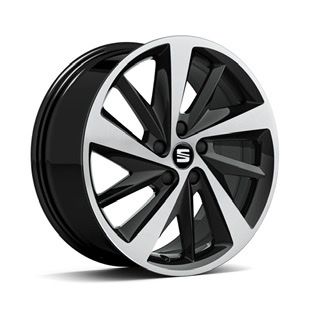 I would personally get it sorted, because it would play havoc with my car OCD

. If you leave it, it may get worse, but a reputable alloy wheel refurb company will strip the wheels back to bare alloy which will remove the corrosion / blistering before repainting / re-powder coating, so once refurbished they should be as good as new.

Lepsons are meant to be one of the best wheel refurb companies in the UK. Link to their website outlining the process they use, which will give you a good idea of how alloys in need of refurbishing are returned back to factory condition. I’ve not used Lepsons myself, but they get good reviews on many VW forums by those that have used them for wheel refurbishing.

How We Produce Stunning Wheels | Lepsons

At Lepsons we perform a FULL factory refurbishment for alloy wheels, taking the wheel back to bare metal and then finishing it exactly as you choose.

It won't fall to bits overnight. You can leave it a while and sort it later. The damage looks pretty typical for wheels of that age. Unless you really keep on top of it all alloys go the same way.

The alloy used for wheels, left to its own devices, corrodes like buggery. Water, road salt etc cause oxidation of the surface and it will pit and turn to white powder. The only way to stop it is to keep it covered and away from anything resembling weather. That's what the paint does.

As soon as you chip or scratch the paint and the elements can get to the metal, it will corrode. The corrosion then spreads under the paint and you get the blisters you can see on your wheel. It takes a while. That chip has probably been there for a few years.

The best thing to do it touch up any chips quickly enough that the corrosion doesn't get started. Once it blisters you'll need to sand, fill and paint the area. A DIY job for a sunny day.
Show hidden low quality content
You must log in or register to reply here.