Going to build a race 1m

After a long time in racing different stuff. I now gonna build my 1m 1.8t in to my next race car. Only problem is I don't know much about vag cars nor turbo cars lol.
But this isn't not gonna stop me. First up I going to strip the car and get a multipoint cage welded in.
I going to paint it that ford rs grey colour. Panel wise it's going to be fibreglass bumpers. front wings. Bonnet and boot. Perspex windows etc. Inside will be stripped leaving only what I need.
Suspension I am still looking in to. At the moment one of my race saxo is on gaz monotube and the other AST. But there is loads more available for the 1m platform.
On a quick note. When I strip the car there will be a full leather interior for sale.. very cheep.
More up dates to come and will up load pics when it progresses

This looks like it could be a fun one!

That the stealth colour on the RS? Friend of mine has it on his ST-3 it's lurvly

I will be following, looking forward to learn more about how to build a track car.
Reactions: Manic172

Forgot to say. I have an AUG engine on the floor to build . Forged rods pistons etc. FMIC set up . Alloy radiator. R8 coils with spacers and clamps. Alloy fuel rail. Catch tank. 6 speed short shift. Alloy lightened pulley set up. Can't remember the name but got the blue cam belt. And new kit. Stage 3 clutch kit. Ram air inlet set up. 380cc injectors. Got a 038 motorsport inlet manifold on order to suit the large inlet port. Think there is more but all in boxes. That's all for now. Till the car gets stripped and goes off for getting the cage fitted. Unless I can find some where to do it my self

Just as a matter of interest do you you use the stock fuel tank or do you fit a stand alone one.

If I decide to use it for endurance I'll foam fill the standard tank. But if it's just used for up to say 25 min races I'll fit a 35-40 litre tank

Hi
Plans sound very good.
I would love to have fibreglass bonnet and arches. And Perspex windows.
Can’t quite commit to it being just for Track just yet.
Would be good to shed 100kgs or more with a strip out.
The rear seat set up and associated parts n door stuff alone saves nr 60 kgs.
Carbon doors would be the one.

I’d look at big turbo. Over hybrid.
Seem to deliver more with less fuss if that makes sense.
Plenty of guys still trying to get the best from their hybrids who wish they’d done a big turbo biuld.
These 1.8 lumps are pretty bullet proof. Just the rods that are shite. Everyone hails the BAM but there is very little difference. Mainly their 225 map over the 210. Also if you have a BAM it’s newer as it was from 03 to 06.

Bill at Badger5 races an Ibiza
With around 400 brake.
He’s one to talk to re the engine set up. He has a sub forum on here or is available st his work. Hope I’m not telling you everything you already know?

With forged rod set up and mani etc you will see some pretty good numbers there.
What braking set up are you going for? Big brake conversion? Porsche?

Been on the phone to custom cages. For £1200 they will supply a multi point weld in cage with all fixings etc. Very tempting.

If you’re in need of a baffled sump there’s a guy called Olly Beaumont who is selling ready welded baffled sumps or you can buy the kits to weld and fit.
Much cheaper than the Forge versions. 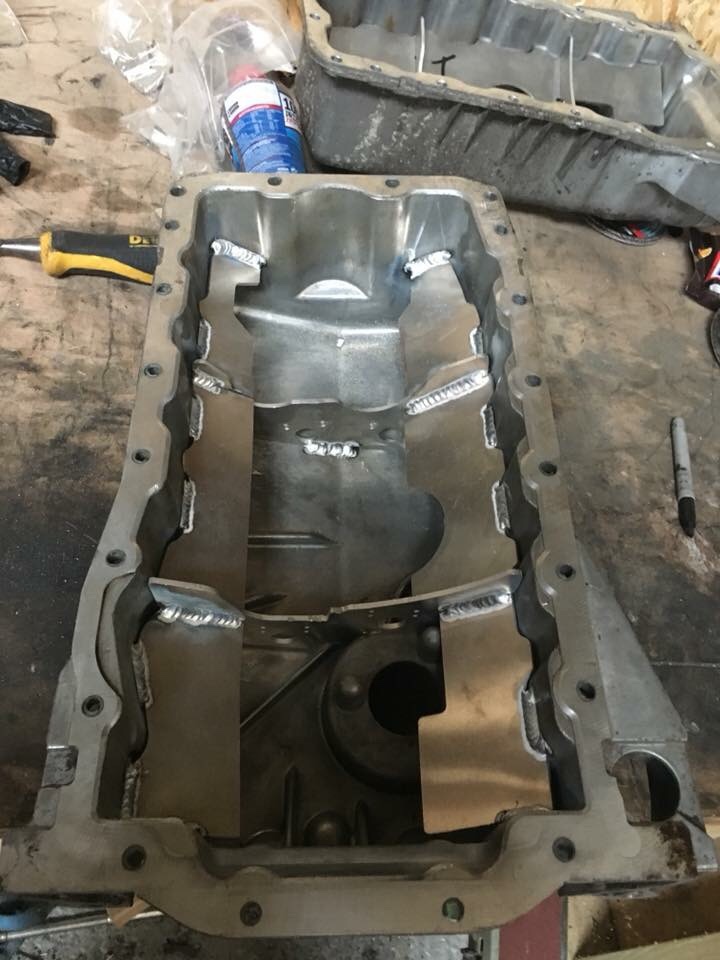 Pm
Me when ever and I’ll put you in touch.

Top man. Will be in touch very soon.

Sounds like a fun project, one to keep an eye on for sure and some decent thoughts in your plans.

A few points that you might not be aware of since you're unfamiliar with these engines:

I don't think there was an AUG, though there was an AGU (Large port head, 20mm wrist pins) and AUM/AUQ (Small port head, 19mm pins). If you're replacing the internals then rods/pin diameter is largely irrelevant, but it's worth knowing which you have in order to build to a decent spec. Depending on goals, large/small port head may or may not be best suited. VVT is another one worth considering, as it'll help spool on a larger framed turbo.

Edit; From later wording in your post you mention large port, so assuming you have an AGU.
The LP head will only really be beneficial above ~450bhp levels, depending on how you plan on delivering the power from your chosen setup. Below this rough threshold a small port head will help to keep velocities high and increase torque.

No Leon came fitted with an AGU so hopefully you've managed to avoid the dated ME3.8 management, which is a bit crude (not necessarily a bad thing) and increasingly difficult to find a decent tuner who's willing to map it these days. Assuming the car you're fitting the engine to was running a 1.8t from the factory it'll be ME7/7.5 and should be DBW, which you can bolt straight up to your new engine rather than haivng to transplant the DBC throttle which will be a bit of a pain (though far from impossible)

Unless you're goign for CSF/similar quality, don't bother. The cheaper alu rads offer no real advantage in terms of cooling, so the only benefit will be a little weight loss of both the rad and your wallet.

Cheap units tend to be bonded, not welded/brazed, which leads to poor heat exhange and longer term sees the core falling apart to some extent.

Don't bother, they're not an upgrade as seems to get falsely thrown around the internet. People get hung up on them because they're red coils, and pay silly money for alu adapters when you can get dealer parts for under a tenner anyway. You don't need clamps to bolt them down.

Don't replace the stock crank pulley with an alu one. The standard part acts as a harmonic damper and without this you risk damage to the crank (have seen one snapped before as a result), as well as nasty vibrations.


Mamic172 said:
Can't remember the name but got the blue cam belt.
Click to expand...

Gates. These have mixed reviews from the bigger tuners recently - they are more "brittle" than a standard part, and have been known to snap nastily. Stock quality belt should do the job perfectly and save you a few quid in the process.

Stock LCR injectors are 386cc, from memory. If you're looking to go above ~275bhp or so then go for something bigger. You'll often see 440/550/etc pop up at good prices for these engines.


Hopefully that doesn't come across as just slating some of your plans, but there are a few things on your spec list that either aren't necessary or should be considered thoroughly - taking some of that on board should result in you putting together a more suitable setup and saving a few quid too


What series are you going to be racing in?
Reactions: Woody_72 and Manic172

Thank you for the input. As you say I don't know about these engines. Only got the AGU from a crashed golf. Just hmmmm might come in handy type of thing.
The ally rad is a csf item I got one in the saxo at the moment and does help a lot to reduce the heat.

They light weight pulley are just going on the alternator with vernier cam . And leave the standard bottom pulley. Again with the coils and cam belt it was just reading they mainly the vw forums till I discovered you lot.
Main thing is first to strip the car and weld the cage in and get it painted. Then suspension.... now that's gonna be a mine field..

Mamic172 said:
Thank you for the input. As you say I don't know about these engines. Only got the AGU from a crashed golf. Just hmmmm might come in handy type of thing.
The ally rad is a csf item I got one in the saxo at the moment and does help a lot to reduce the heat.
Click to expand...

Sounds good! Not sure where you're based but if you decide a small port head would suit you better let me know - I have a couple spare and could do with a large port for a new build
Reactions: Manic172

Just a question. I know there is large and small port heads. But is there any difference between the different small port heads on different engine codes. I know the saxo 8v on the 1.6 range of heads there is 3 different types. And the even more so when you include the peugeot 8v 1.6 heads As well. The with a bit of this engine and a bit of that one I built a 125bhp 8v saxo with no race cams or oversized bits etc.

The castings are virtually identical between all large port, and all small port heads. There were one or two very minor differences in machining but negligible. Spec wise, you'll find that some came with VVT and others did not, and there were a few variants of cams though largely the same across all 20vts so don't get too hung up on that. K04 variants (AMK, BAM, APY and another I forget from the TT) had shims beneath the springs to add a little extra preload and no connection in the gearbox end for a combi valve which connected up to the SAI system on 150/180bhp models.

For all intents and purposes, the only real differences are large/small port, VVT/non-VVT, and SAI/non-SAI.

I just left one job about 3 months ago to now work for DAF. I used to run a work shop for a recovery company. We also picked up and disposed of abandoned cars.. at one point I had 4 TT's for spares. 3 of them where BAM225 I wish I broke them and saved all the bits now lol
But left on bad terms so no going back. Me and I would have had k04 set up as well.
Bigger lol
Show hidden low quality content
You must log in or register to reply here.
Share:
Twitter Reddit Pinterest Tumblr WhatsApp Email Link