It's in limp mode with the flashing glow plug light + engine light.

The AA diagnosed a failed or blocked EGR valve so they have blanked it against the engine block manifold. The EGR solenoid seems to move freely so I cleaned the flexi pipe out (lots of carbon and a much reduced hole) but it made no difference.

Anyway, with the EGR still blanked I currently have a P2454 code on the scanner.
This is described as "Particulate Filter Pressure Sensor A Circuit Low". 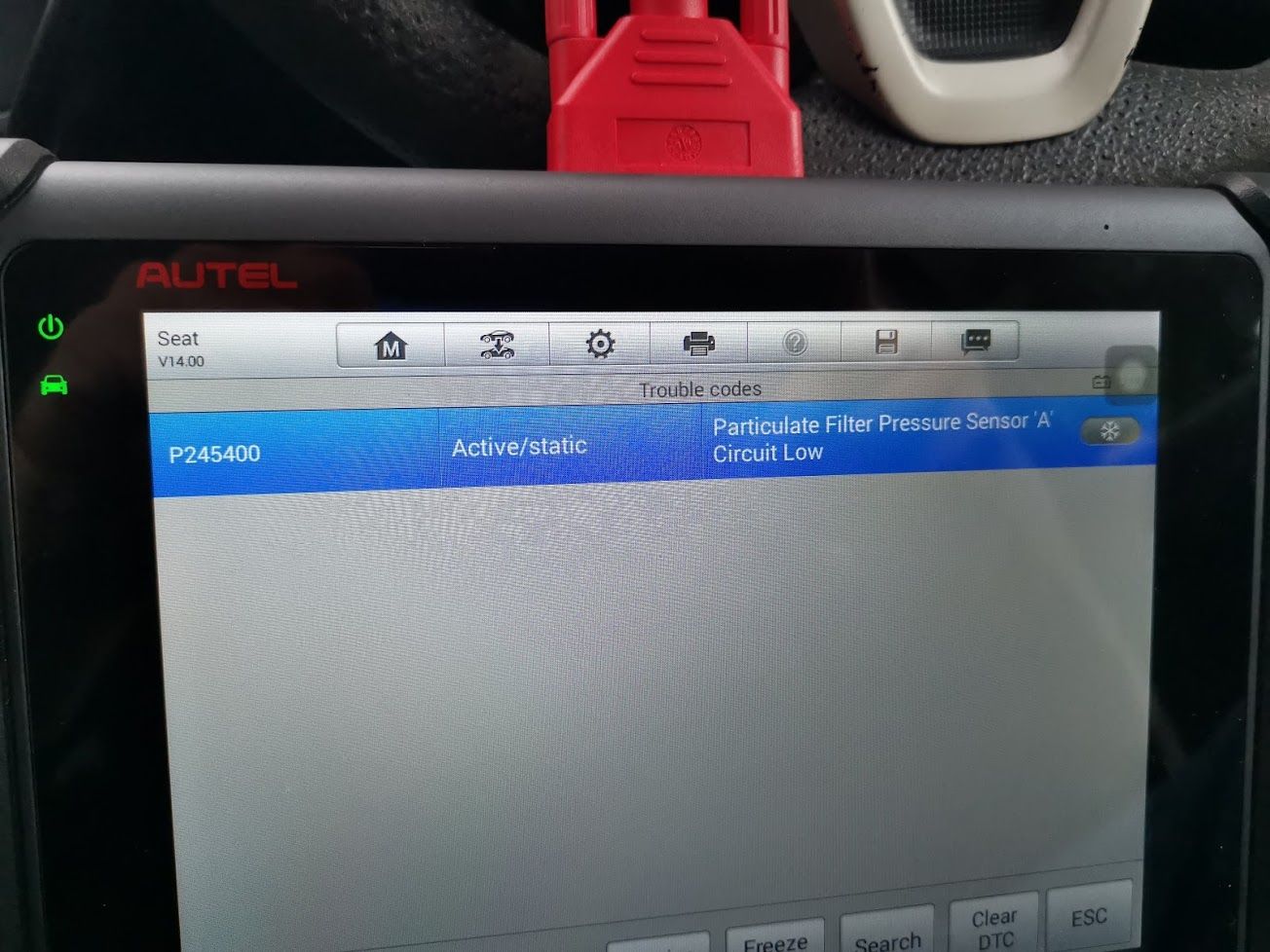 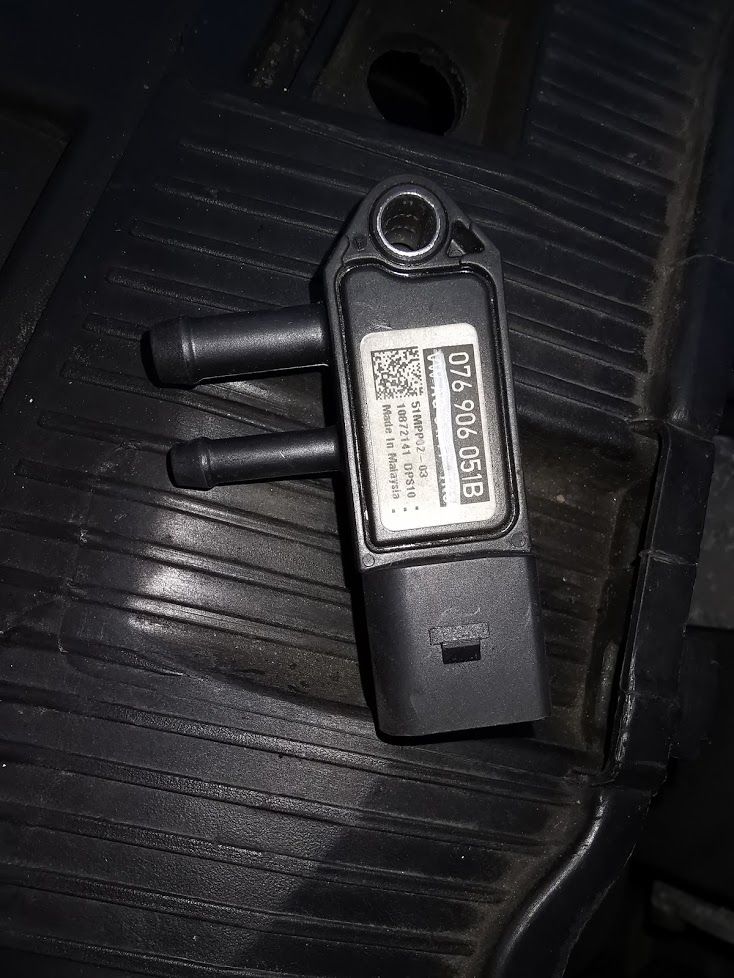 I have looked into this and bought what Google suggests is the right sensor (as per the picture, above -076 906 051B) - but can't find where it's located.

Some places and DIY Guides suggest it should be fixed to a bracket near the header tank (drivers side).
Others show the sensor fixed towards the back of the engine (at the top) inside a foiled heat-shield pouch (similar to the one pictured - yet its an entirely different setup). 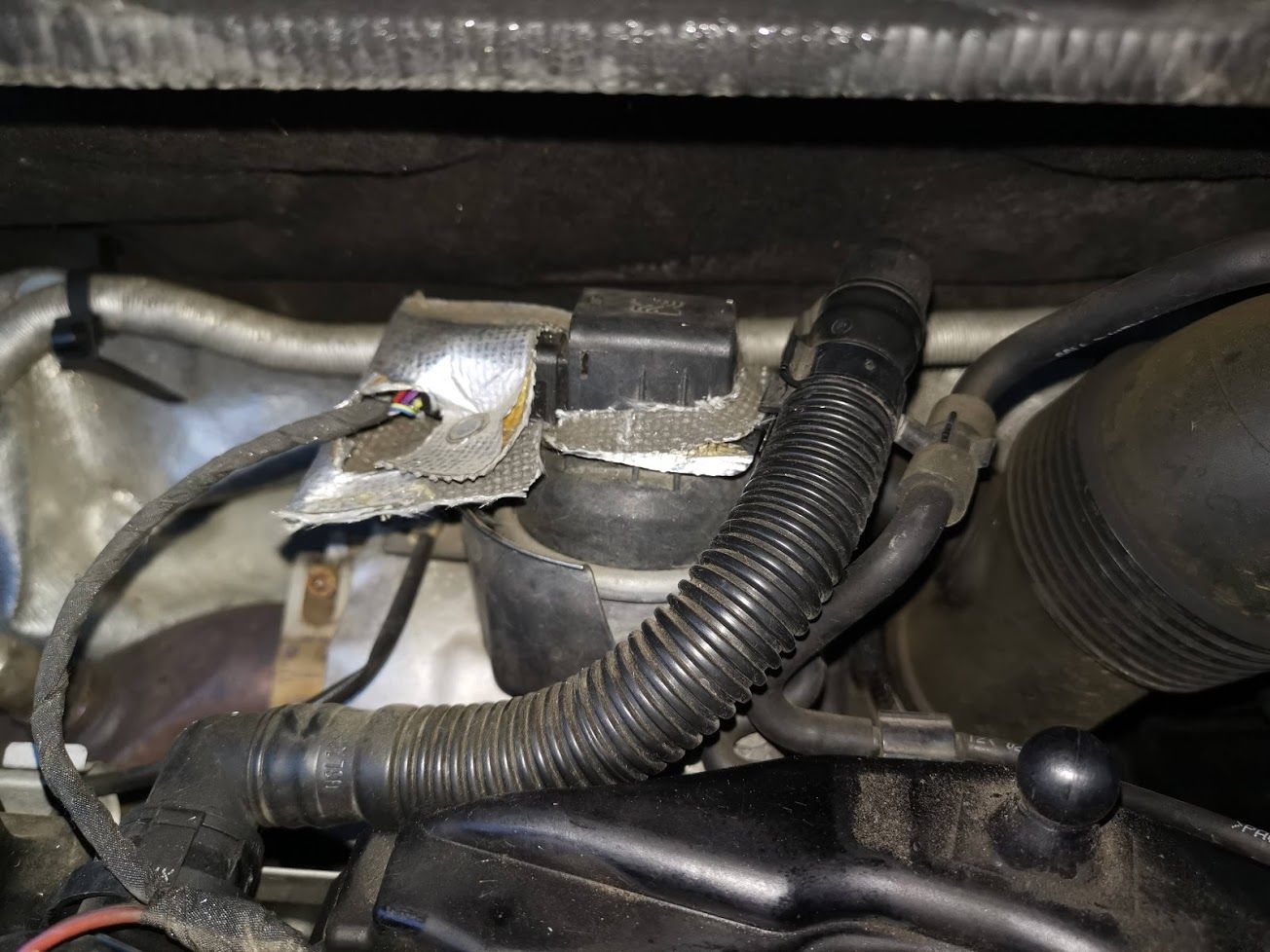 Either I have been given the wrong sensor, or am looking in the wrong places (although I have searched practically the entire engine bay)...

ANY HELP would be gratefully appreciated...

(pics of the engine bay for reference) 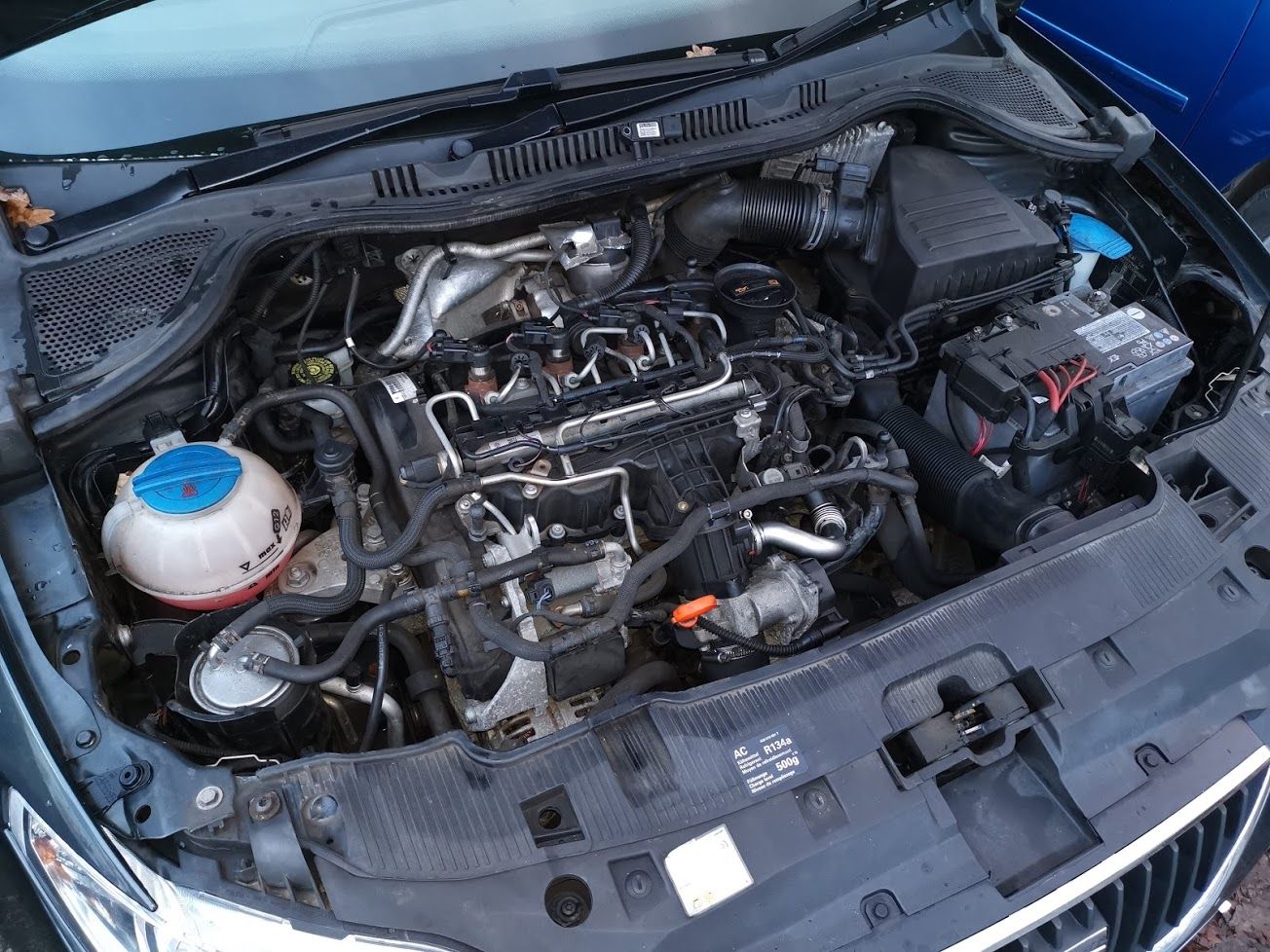 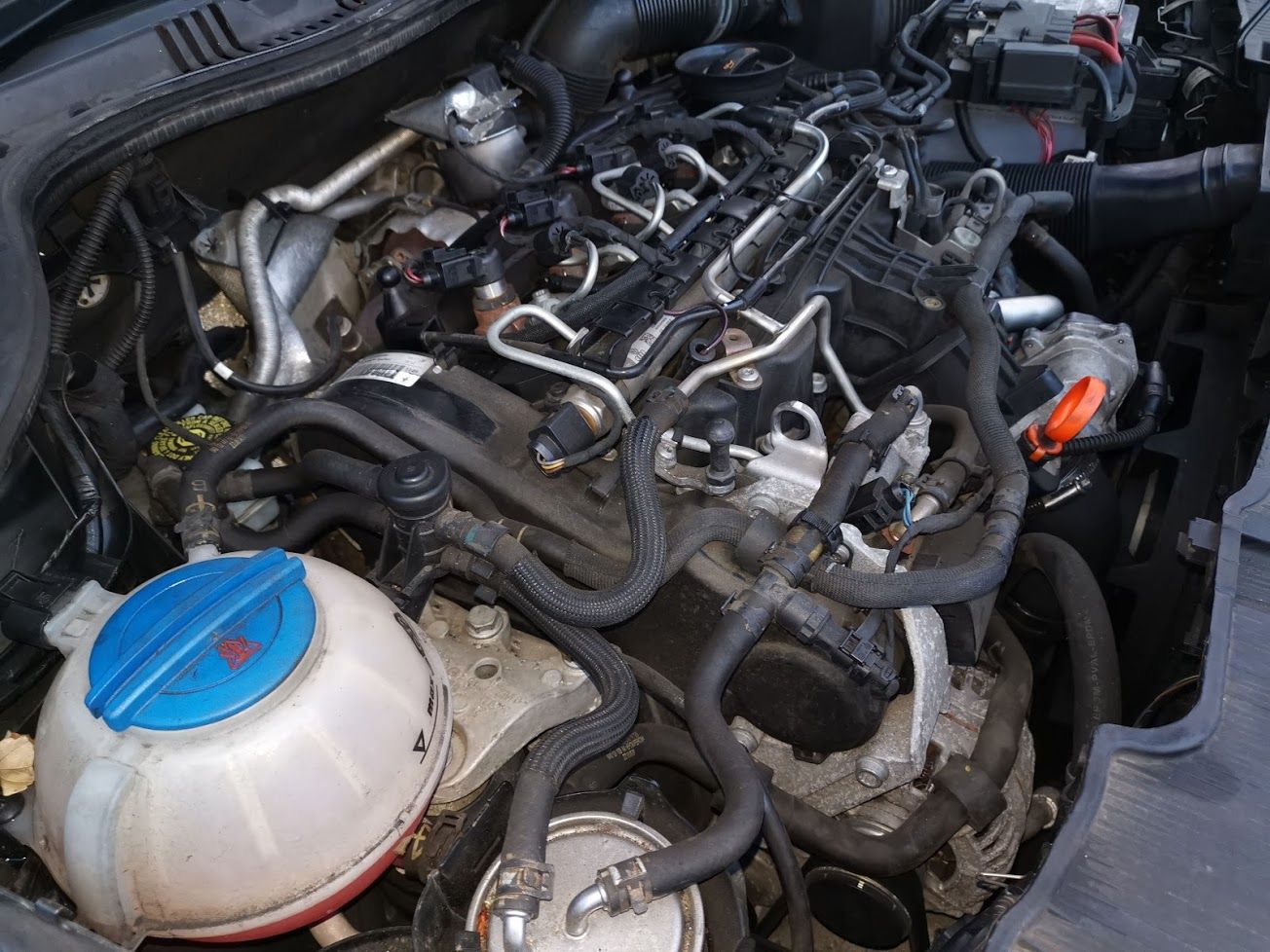 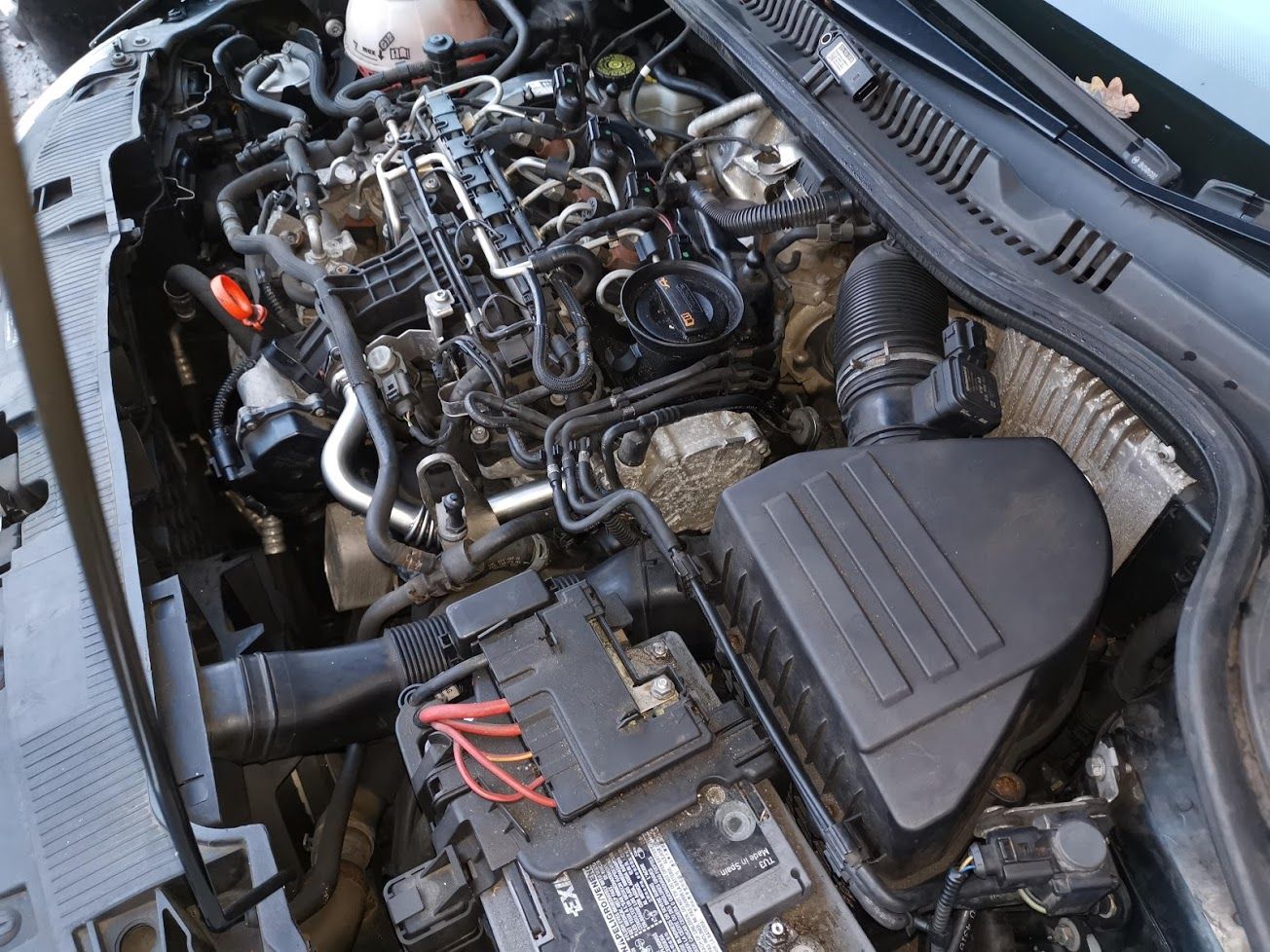 I had the same fault on my car a few years ago. The sensor is located on the rear firewall on the side with the battery and airbox. If you look below the pipe coming out of the airbox (with the MAF) across to the engine bay you should see it most of the way down. I had to remove the airbox and battery to get to it.

I have attached a few pictures that may help. I can't take more as I no longer have the car.

Thanks so much for the reply and pictures!

In that case I will take a look and fit the sensor tomorrow - hopefully it will allow the code to clear and take me out of limp mode!

Thanks again - i changed the valve today. The connections from the old one into the rubber hoses both snapped, so a bit of messing around - but job done.

The DPF code has now gone, but im just left with an EGR code.

As previously mentioned, the AA blocked the egr flexi pipe as a temporarily repair.

I cleaned out the flexible silver pipe (from the block to the egr itself) which was quite choked up and removed the blanking plate - but if its not blanked, the car wont even start!

Any advice or help appreciated.

I have a Seat Ibiza 2010 1.6 TDI which gives the same P2454 error (Particulate Filter Pressure Sensor A Circuit Low). The first suspicion would be the pressure sensor. What I am going to do is to check the sensor output voltage and also check the input hose pressure with a pressure gauge and change the sensor if it is the defective part. I have two questions which I appreciate if anyone specially @Gallen @propane94 can help me with them.

First, I have read if you change the sensor then the new sensor should be adapted with VCDS software to let the ECU re-learn the new sensor parameters. Have you done this or heard about it?

Second, how practically difficult is it to access the sensor? Is it enough to open only the air filter box (not the batter as it is not that easy to open the batter)?

Thanks in advance for your time.

It was very easy to change the sensor.

I just removed the air filter box. Be careful to make sure you remove all of the bolts. I did snap a bracket on mine as missed one due to rushing ( - although out of sight and makes no difference once refitted.).

The connectors on the original sensor snapped off inside the pipes whilst removing the pipes - so i used a screw which I tapped in there and then a pliers to pull out the screw and old pipe connector out of the pipe. The other one didn't want to come out, so I cut the pipe down a little. There was plenty of extra pipe so no problem.

With the new sensor fitted, this problem went away - confirmed by the code reader (Autel).

However I am now left with the blanked off EGR (which the break down company fitted).

The car won't start if I remove the blanking plate, so looks like I either need to clean it out (which doesn't really work from experience on other vehicles) or fit a replacement EGR! As it stands, it's painfully slow to accelerate and is in limp mode. It does clear via the code reader but soon comes back as soon as you drive off.

Fitting the sensor is very easy. Just put a rag underneath incase you drop the bolts to stop them becoming lost. Also, another tip is don't put any tools or parts in the inner wing channels - there's a big hole / gap there which can see them drop into the inner wing itself! (Thankfully I have a bore scope camera and a magnet!!!!!!).

Other than that, it's very easy.

Thank you so much for your detailed explanation Gallen. It is very useful especially the tips. I will try to give it ago when the weather let me do it.

I did a bit of research on the sensor adaptation and it seems you need to adapt the new pressure sensor when you change it before even ignite the engine, otherwise, ECU cannot figure out how much soot is in the particle filter (or something like that). Obviously, you don't get any error as the sensor itself works fine, but the data would be wrong because the calibration parameters are for the previous sensor. It may affect the DPF regeneration and the particle filter accumulate more than the allowed amount of soot which could make you change the whole DPF which is very expensive. However, that's only my research but it is worth consulting with an expert.

Unfortunately, you cannot adapt the current sensor anymore, and you need to get a new one, based on my research again ;-)
Show hidden low quality content
You must log in or register to reply here.