Here she is. Picked her up at lunch time and looking forward to spending more time with her. Is that sounding a bit creepy? No plans to mod, but we'll see what happens! 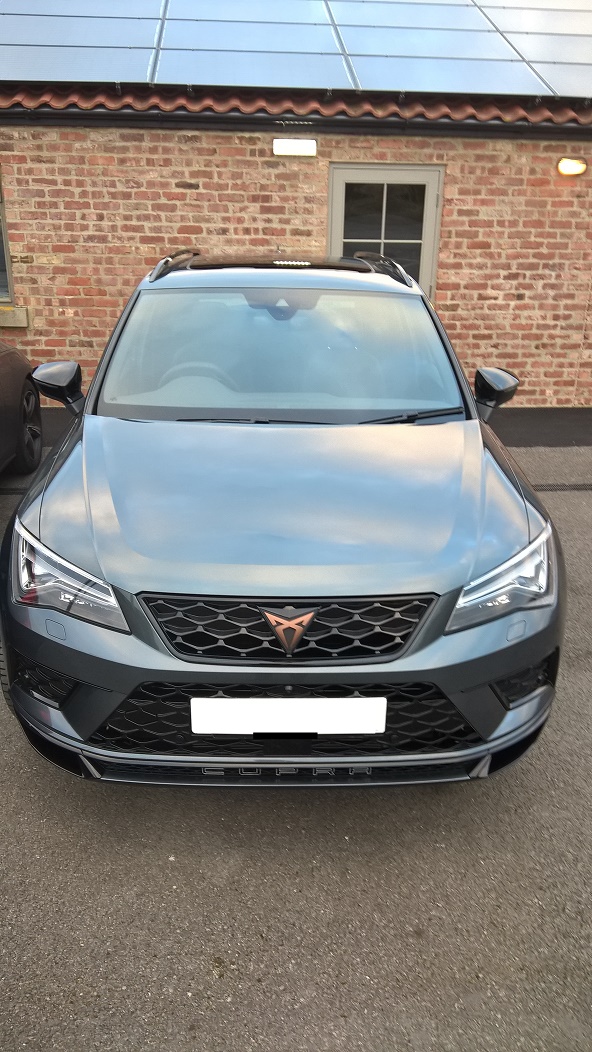 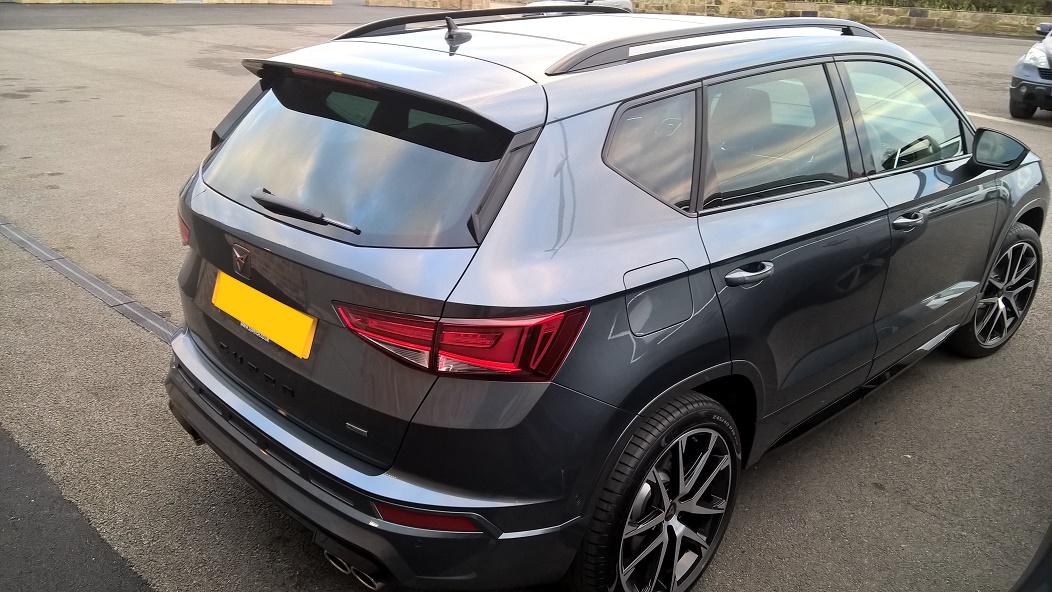 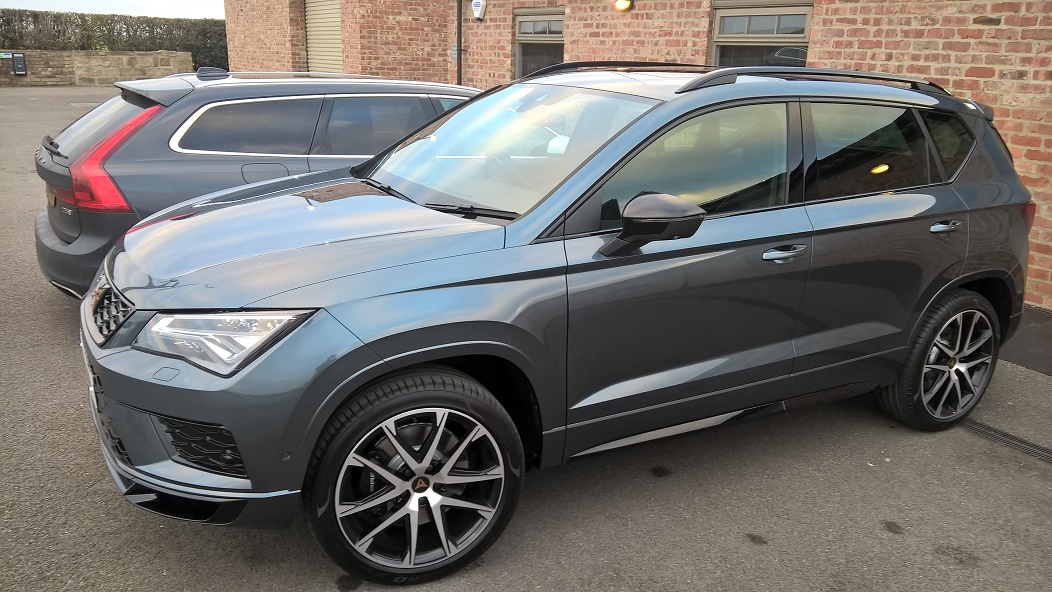 That front splitter needs to fit my car lol but I doubt it...

How you finding it after a little while?

If you're anywhere near Doncaster you should come and show it off to some forum members having a nice chat about cars. 28th April is the date here is the link. Be good to see one in the flesh.

Sunday's tend not to be good for me, which is a shame because that seems to be when most of the meets are. Sounds like @wesbar is going to try to get to the Doncaster meet so you should still get he chance to see one.

Probably intending to get a longer write up done after Easter when it's run in and I've had a couple of long runs.

Looking good! Ours will have about the same spec, but in velvet red. Hoping for delivery end March/early April if the dealer did not mix up dates!

Just to let people know a few more thoughts on Cupra Ateca ownership. After the best part of two months, what is the Cupra Ateca like to live with?

Coming from a pre-facelift Leon I felt immediately at home in the Ateca. A number of reviews that I have read criticise the interior for not being more 'special' than the SEAT version. I don't think that it is necessarily a bad thing. It was good to know where everything is without having to go through a laborious learning process. That being said, diving into the options on the touchscreen does give access to a lot more options than I previously had. The Ateca does feel like a much bigger car than the Leon both inside and when trying to place it on the road. It's good to have the performance when needed, but the Ateca makes a surprisingly good long distance cruiser. It is quiet at the legal limit, and considering the performance available is reasonably economical when it needs to be (although as one review commented, if you do regularly access all the available performance, it's thirst for fuel is prodigious!)

I've just returned from a weeks holiday in Devon - for the geographically challenged, that's a fair hike from Darlington! On the way down, detouring via Bath I got over 35mpg and on the way back (averaging 65mph) I got 37.4mpg. My anxiety about range was completely unfounded - having filled up on leaving the B+B I still had over 100 miles range left when I got home (should have been good for about 450 miles in total).

Other than finding it a little thirsty on my daily commute (due to the nature of the journey it's difficult to crack 25mpg on the way to work! Coming home is a bit better) I've found very little to criticise about the car. It's facing it's next big challenge tomorrow with what I hope is going to be the first blitz on the garden this year - let's see just how much we can get in the boot!

The only worrying thing is a couple of noises that have started in the past couple of weeks. What initially sounded like some kind of fluid sloshing around has crystallised into some sort of suspension creak (I think). In the past couple of days the power steering has started joining in as well. A trip to the dealer very shortly is going to be in order. Given the level of service I've had in the past I'm not looking forward to it!
Reactions: Syphon, Bucksssss, louiskopite and 1 other person

A vocal bush seems to be the issue then... You getting it booked in lol

Suspension has been sorted. The lass on the desk reckoned that there was a recall on the suspension - apparently there's a fix to stop the problem happening in the first place. However, if there is a recall I would have thought I should have been contacted? Side cameras are still wonky as they don't have the equipment to calibrate them and they will need to 'borrow it'! That could be a bit of a hassle. Apparently Bristol Street Motors don't do courtesy cars - you can have a loan car for the bargain price of £30 instead.

Looking good
Seems the suspension noise is not uncommon, at least there is acknowledgment and a fix, has yours now been sorted ?
Side cameras wonky ? can you expand please ?

Are those Bridgestone Turanza 005's fitted ?
Mine will have those, but the car I test drove had the Pirelli's, how do you find them for road noise and grip ?

For info: I had the suspension noise issue. Complained to Cupra dealer, car got fixed free of charge as indeed there is a recall for this issue. BUT: passive recall - Cupra will not contact you as owner to alert you of the issue, but will fix it free of charge if you complain. It involved more than just replacing a bush if I recall correctly, can confirm tonight once I found the paperwork again.

My car was delivered on Pirelli P-zero; got those changed for Bridgestone winter tyres yesterday.

Savage said:
Looking good
Seems the suspension noise is not uncommon, at least there is acknowledgment and a fix, has yours now been sorted ?
Side cameras wonky ? can you expand please ?

Are those Bridgestone Turanza 005's fitted ?
Mine will have those, but the car I test drove had the Pirelli's, how do you find them for road noise and grip ?
Click to expand...

Suspension has been fixed and hasn't caused any issues since. I think there's a 'soft' recall on it (i.e. they'll fix it next time the car is booked in), unless you actually have the problem.

Both side cameras decided to swivel about 30 degrees in the same direction. Slightly weird and random as they were still parallel, but nowhere near straight. Had to go 'old school' for a while and actually look out the window to see if I was in the space correctly! I don't think they're quite right still as when you park in a lined space, the lines don't look parallel on the screen.

No idea what tyres I've got - whatever it came with! Plenty of grip thought and not unreasonably noisy. I'll try and remember to check when I go home.

'Little' John said:
Had to go 'old school' for a while and actually look out the window to see if I was in the space correctly!.
Click to expand...

'Little' John said:
Suspension has been fixed and hasn't caused any issues since. I think there's a 'soft' recall on it (i.e. they'll fix it next time the car is booked in), unless you actually have the problem.
Click to expand...

Ah, Well mine is/will be the showroom model that I am told they have had for about a month.
So maybe they changed it at factory since it became known, or maybe mine will need to go back if it starts making noises down the line.

I know the Pirelli's have some good rim protection, not so sure about the Bridgestone's as that was the last thing on my mind when I was seeing if the tribe all fitted in !
I had been looking at maybe replacing with some all weather tyres if the rim protection isn't great, Bridgestone do some that look fairly decent (weather control), the best would appear to be GoodYear Vector4season gen2, but not available in 245/40/19

I generally avoid kerbs for that reason, but somehow my last 2 cars I managed to get a little scuff on without recalling hitting any