You are using an out of date browser. It may not display this or other websites correctly.
You should upgrade or use an alternative browser.
Overview Discussion
I had some issues finding help on this when I was doing it so I took the time to photograph what I did to write this guide and hopefully help others who attempt it.

Disclaimer: I am not a professional mechanic, just a enthusiast who likes to have a go myself. Follow this advice at your own risk.

Other than standard tools you will need

The suspension top nuts I would recommend using a pass through socket set (needs to include a 21mm socket), a long t45 torx key and mole grips to increase leverage on the torx key.

An impact wrench will also do the job apparently, but this involves removing the plastic guard from the window seal which I didn't do and can't advise on (it looked a bit awkward)

Working in the engine bay, on the plastic guard that goes along the window find the two plastic push clips on each side pictured below: 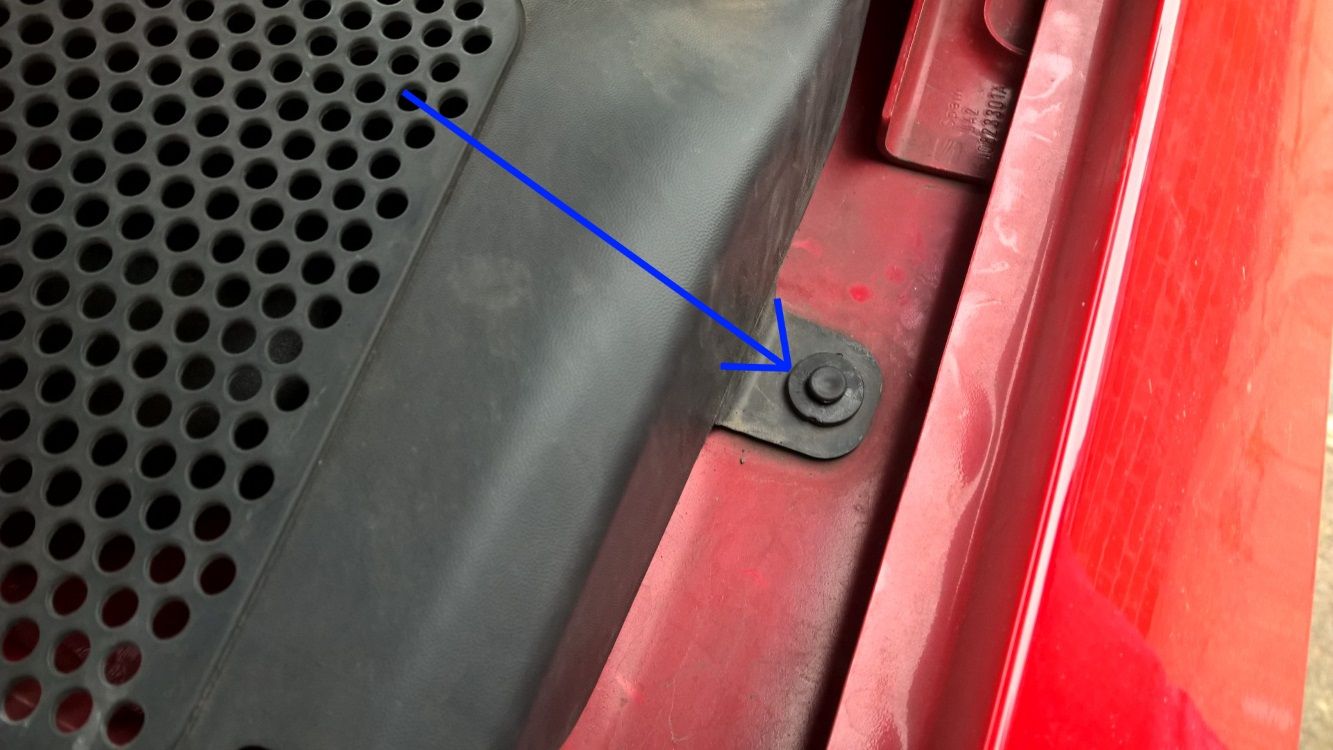 Use a pocket screw driver to lift the center, which will release and allow you to pull out the whole clip.. mind the thing doesn't fall down the gap in the wing or you'll be half an hour removing the arch liner to retrieve it.

On the wipers remove the plastic caps with a pocket screw driver and undo the 13mm (iirc) nuts pictured below: 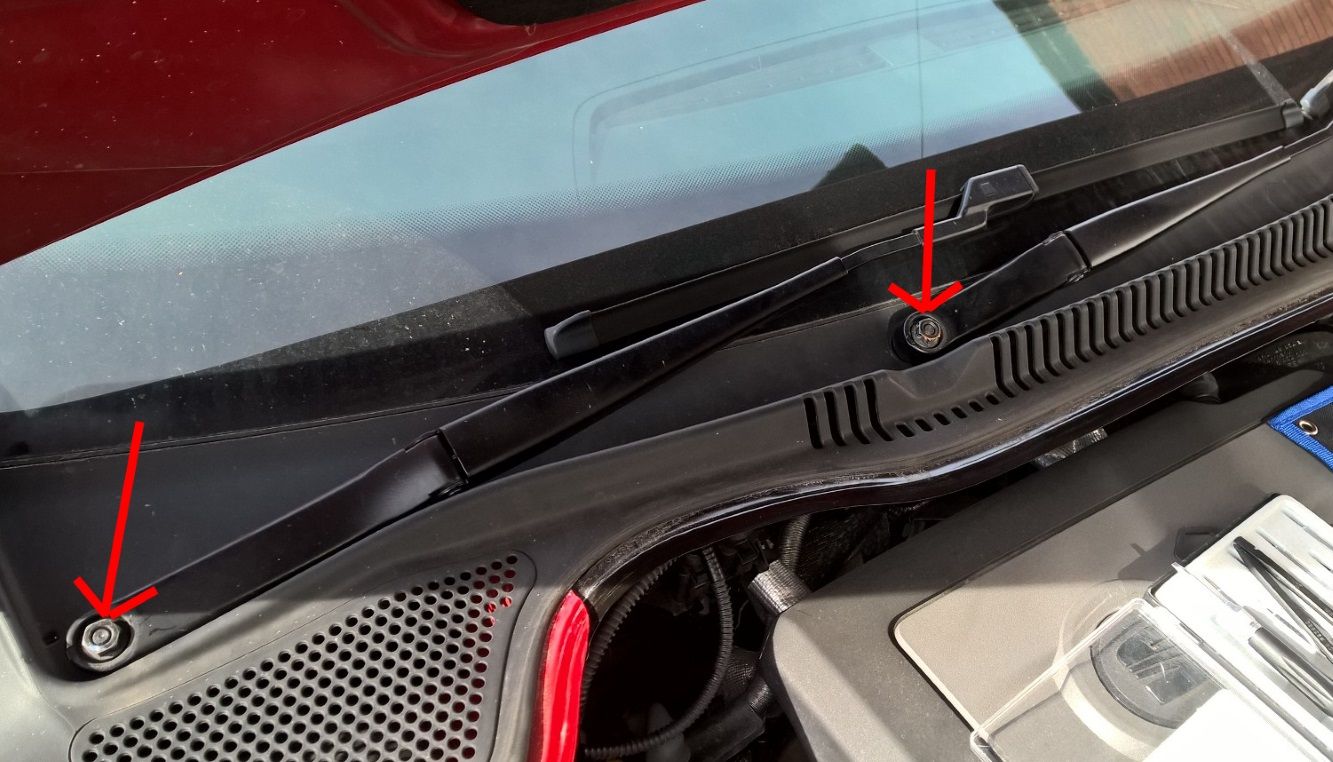 You can now wiggle the wipers free and remove them, I think they are the same but I marked mine with tape to remember the side they came from/

Now the plastic cover can be lifted from the front (sort of hinging at the bottom of the wind screen) to reveal the strut tops.

There are plastic domes on the strut tops, just lift these off: 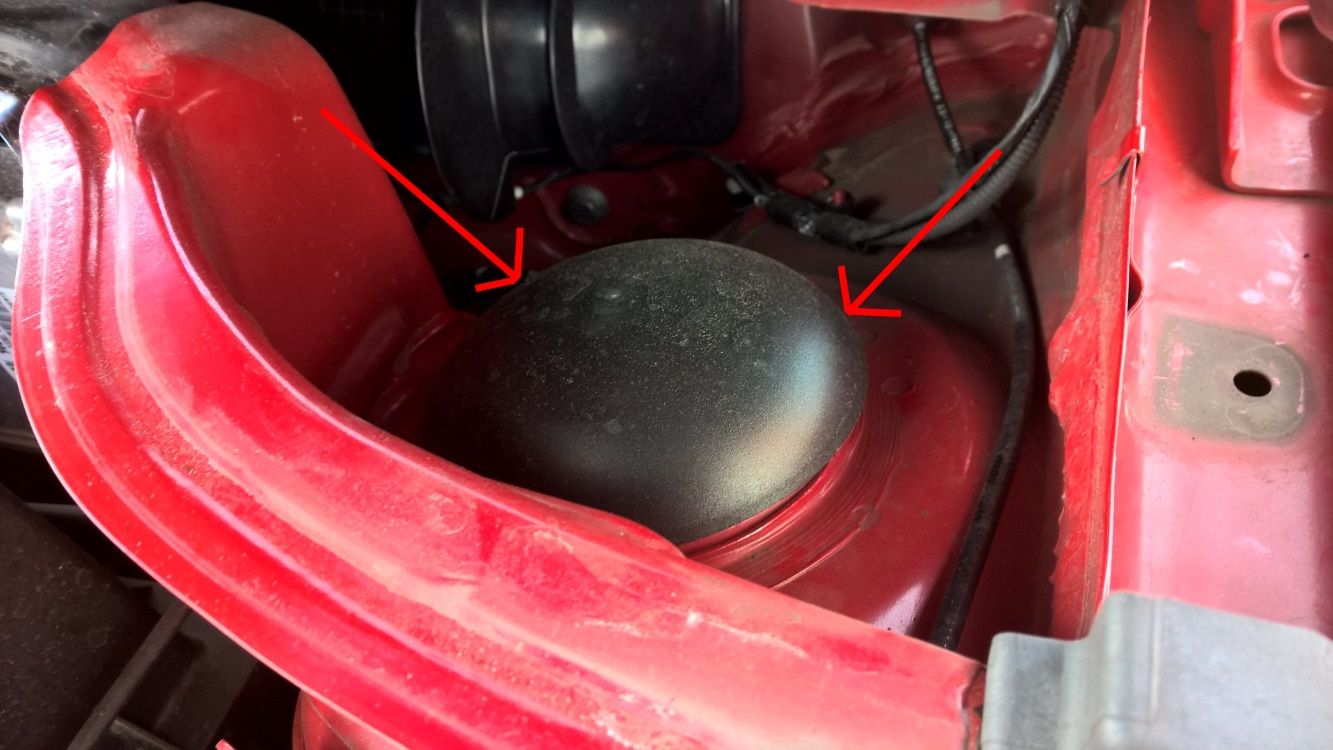 Next loosen the top mount nuts, I get to this step first to make sure they can be removed else you're wasting your time removing anything else.

So the solution is a pass through ratchet with a 21mm socket. I used this with a T45 long torx key and mole grips to get extra purchase on the counter hold. This loosened the top nuts easily! 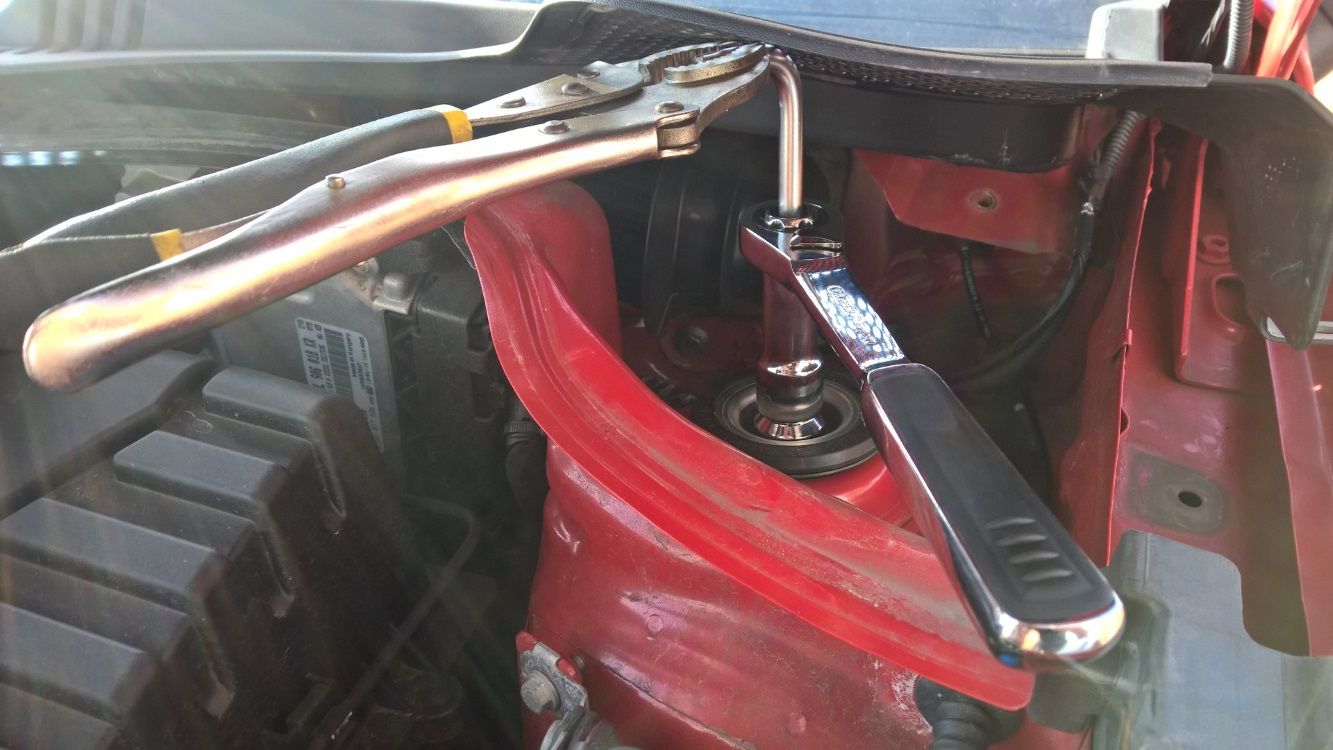 Now we know the strut top nuts can be undone we can jack the car up, remove the wheel and secure with axle stands (You'll be hammering down on the hub so this is required), this will also free your trolley jack up which you will need for other purposes.

First thing to do give where the strut meets the hub a good spray of WD40 or similar, doing this early helps give the oil time to penetrate into the hub cup.

Detach the brake line from the holder on the strut, do this by prying the metal clip away with a screw driver or pliers and it will be free. Also detach the ABS sensor cable in the same place, this pulls away pretty easily. 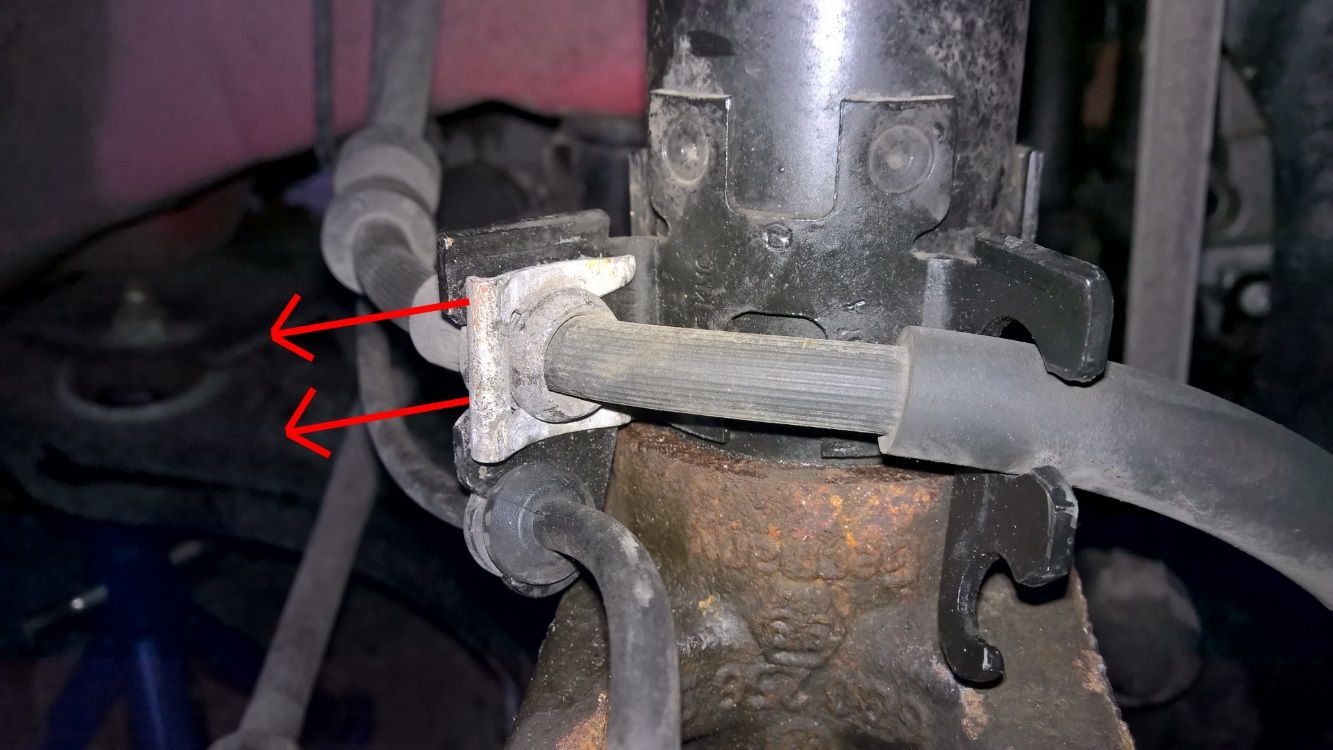 Remove the anti rattle clip on the front of the caliper, use pliers or a screw driver to lever it out, I didn't get a picture of this but its easy to spot.

At the back of the brake caliper remove the two plastic dust caps and undo the caliper slider pins with chosen 7mm Allen tool like pictured below, then pull the slider pins out. 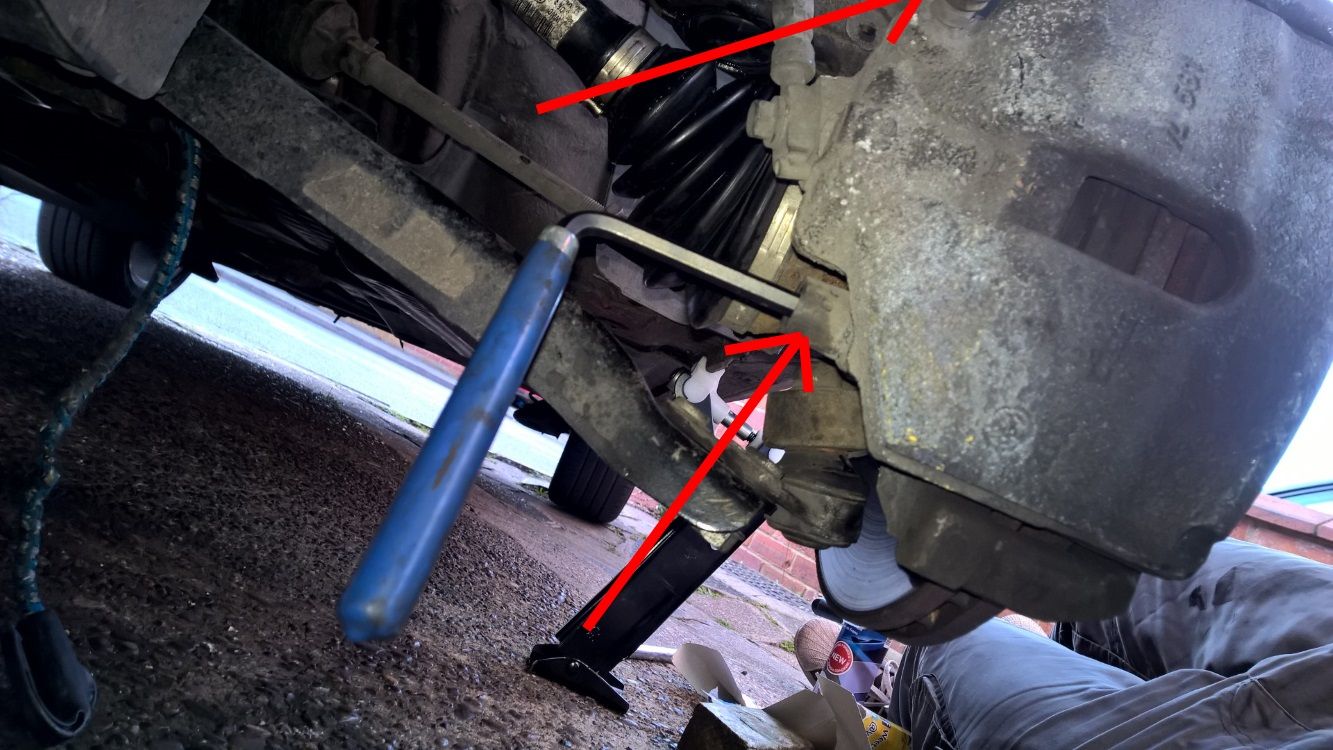 You should be able to slide the brake caliper away now, find something you can put on the floor to rest this on so the brake line is not taking the weight of the caliper, during other jobs I often hang this from the suspension spring with a bungee cord but since the leg is coming out that isn't really an option.

Next you need to remove the brake caliper carrier, there are two bolts on the back that secure these and I *believe* they are 18mm, but check this. 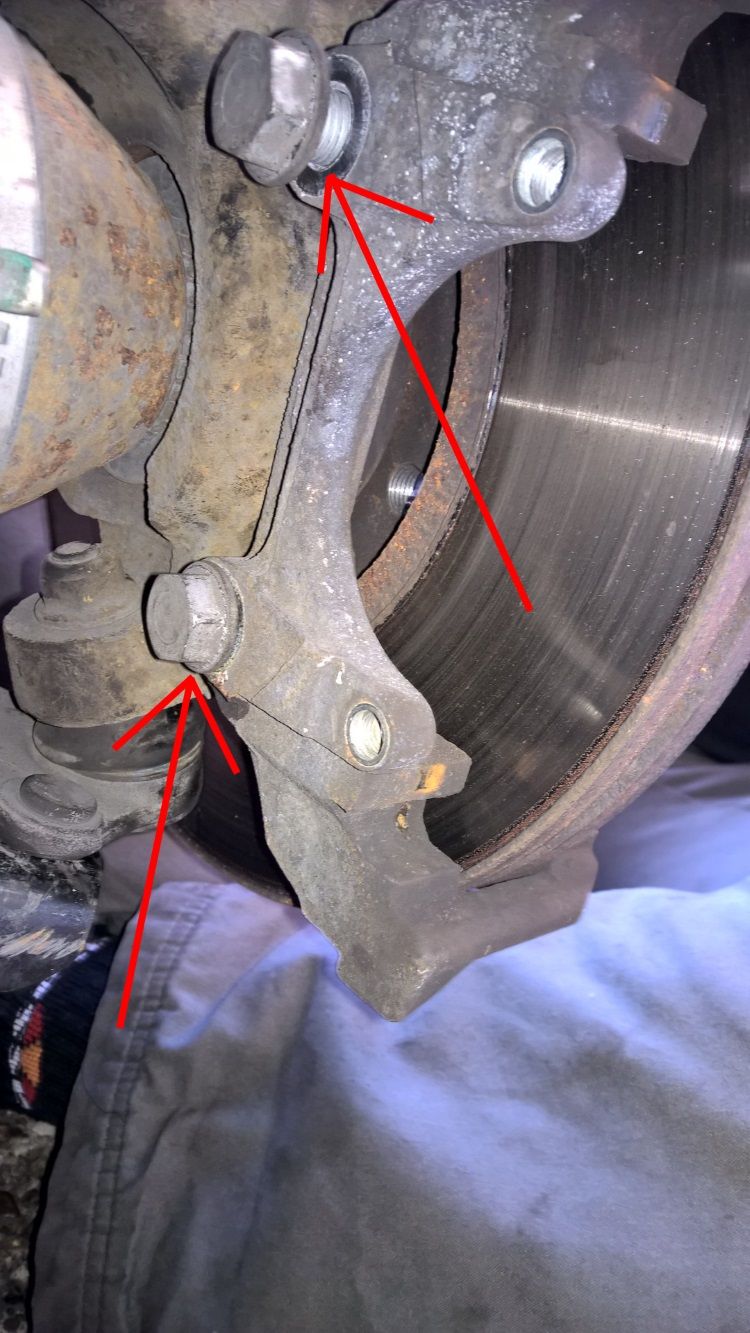 Remove the T30 retainer on the brake disc, mine came out with a torx key but my car is only 18 months old.. the correct tool to remove is an impact screw driver with a t30 torx bit if a key doesn't do the job. 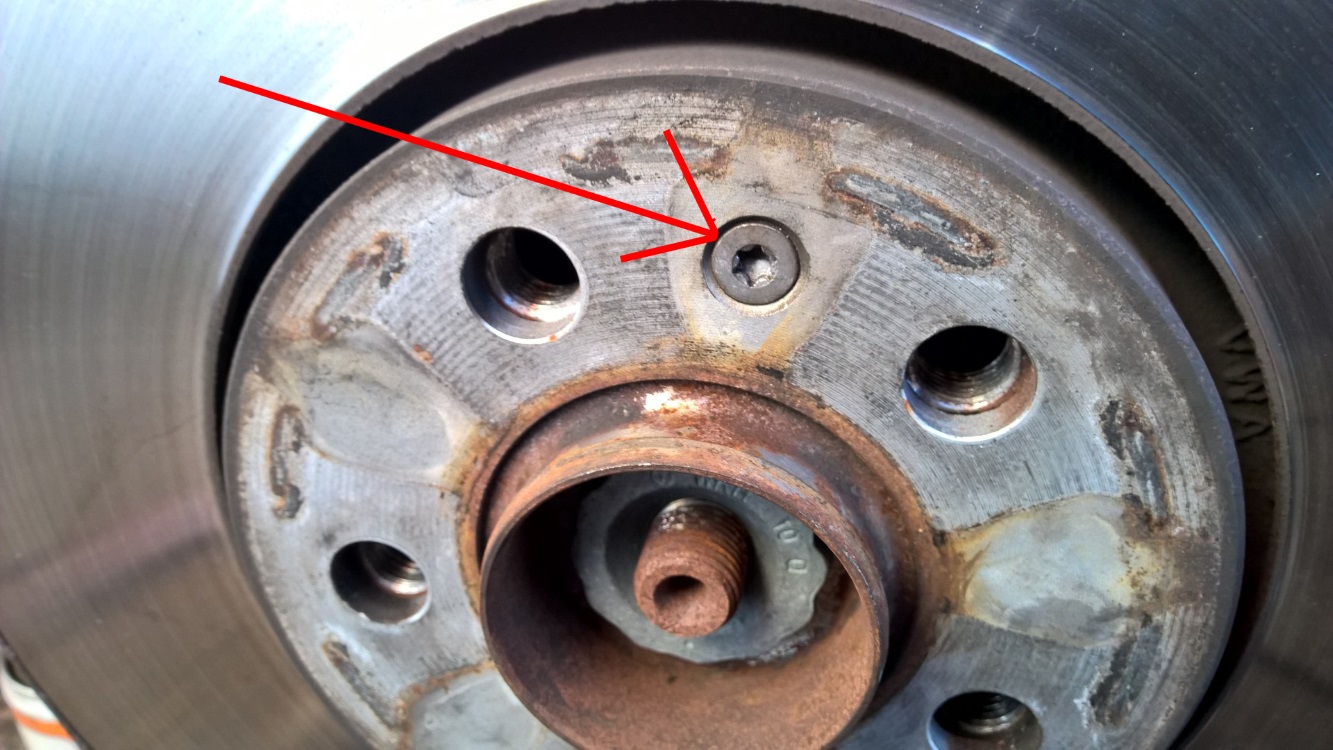 The disc can now be removed, it may need a few taps from a hammer if its corroded onto the hub.

Remove the splash guard, there are 3 T30 screws holding this on: 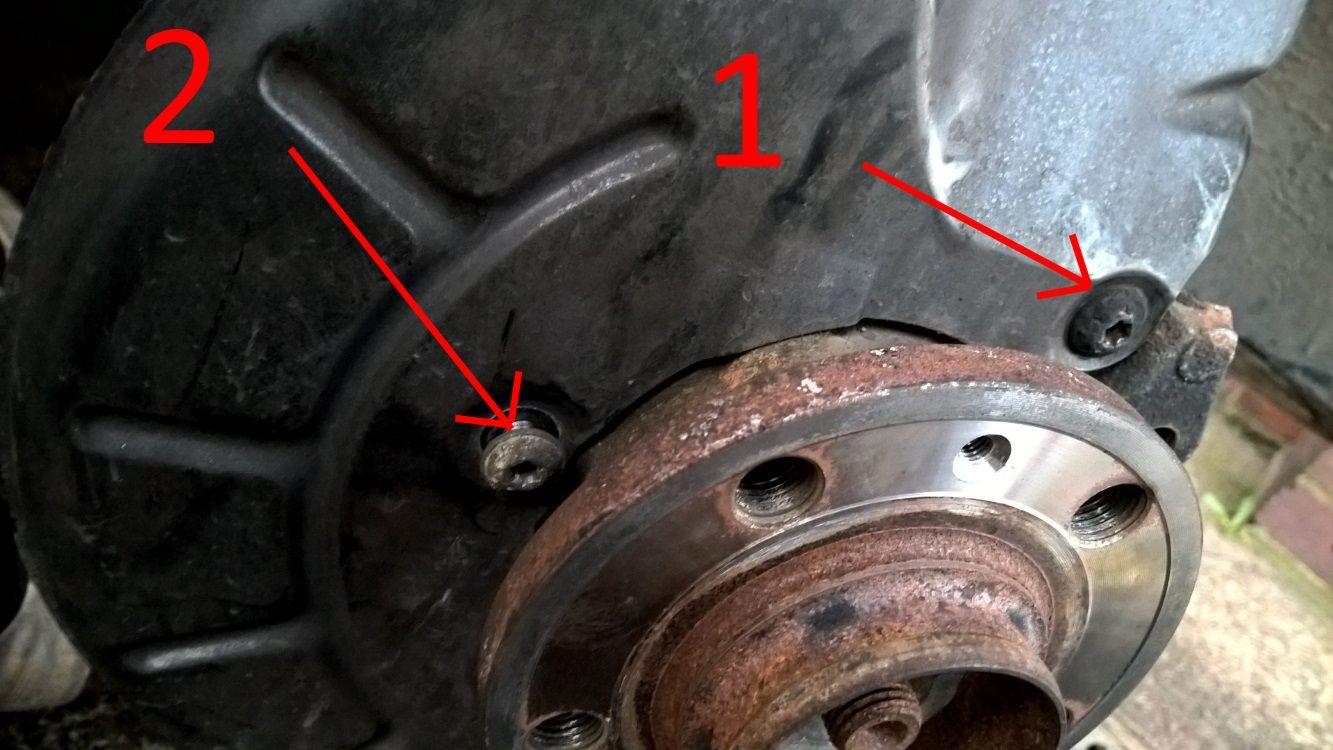 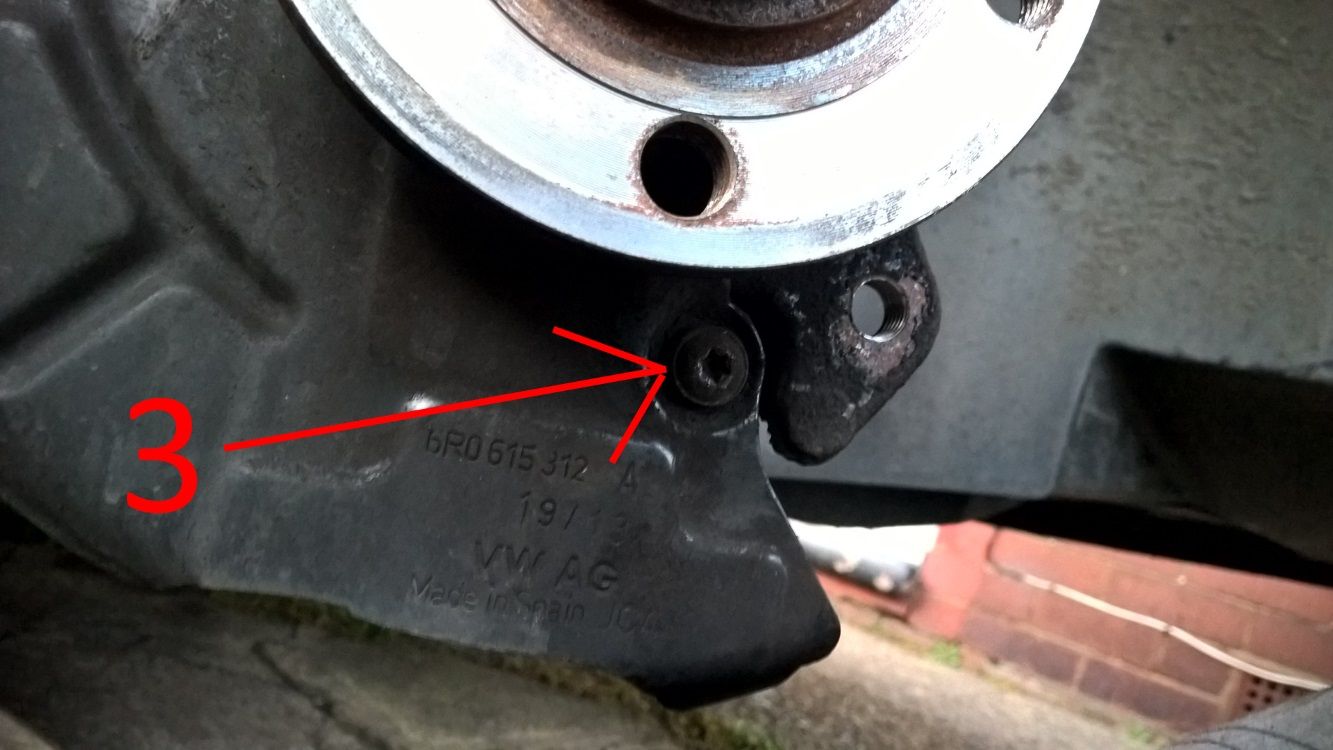 Use a 5mm allen key to remove the ABS sensor screw, gently wiggle the sensor up from the hub to get it to come away. It may feel difficult to remove but it will come. I'd rather remove this fully than remove the connector as I want no risk of damaging it when hammering the hub. 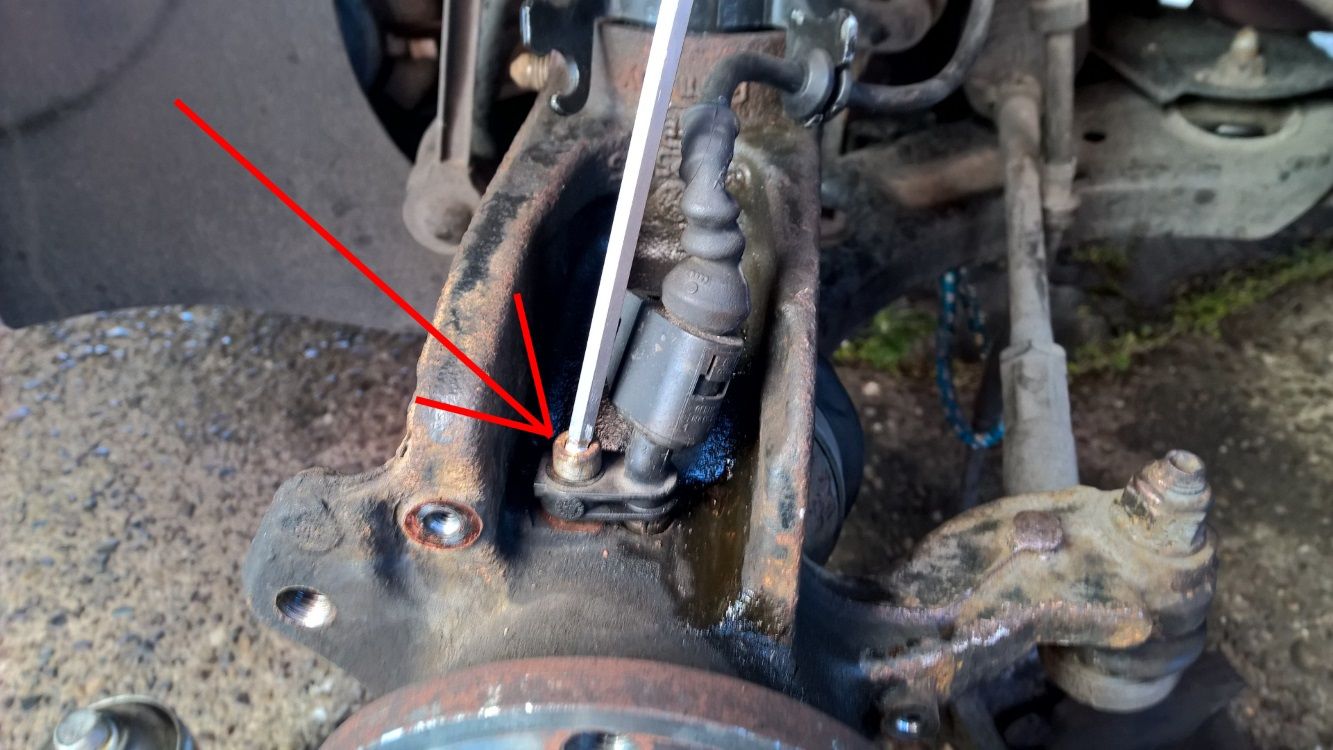 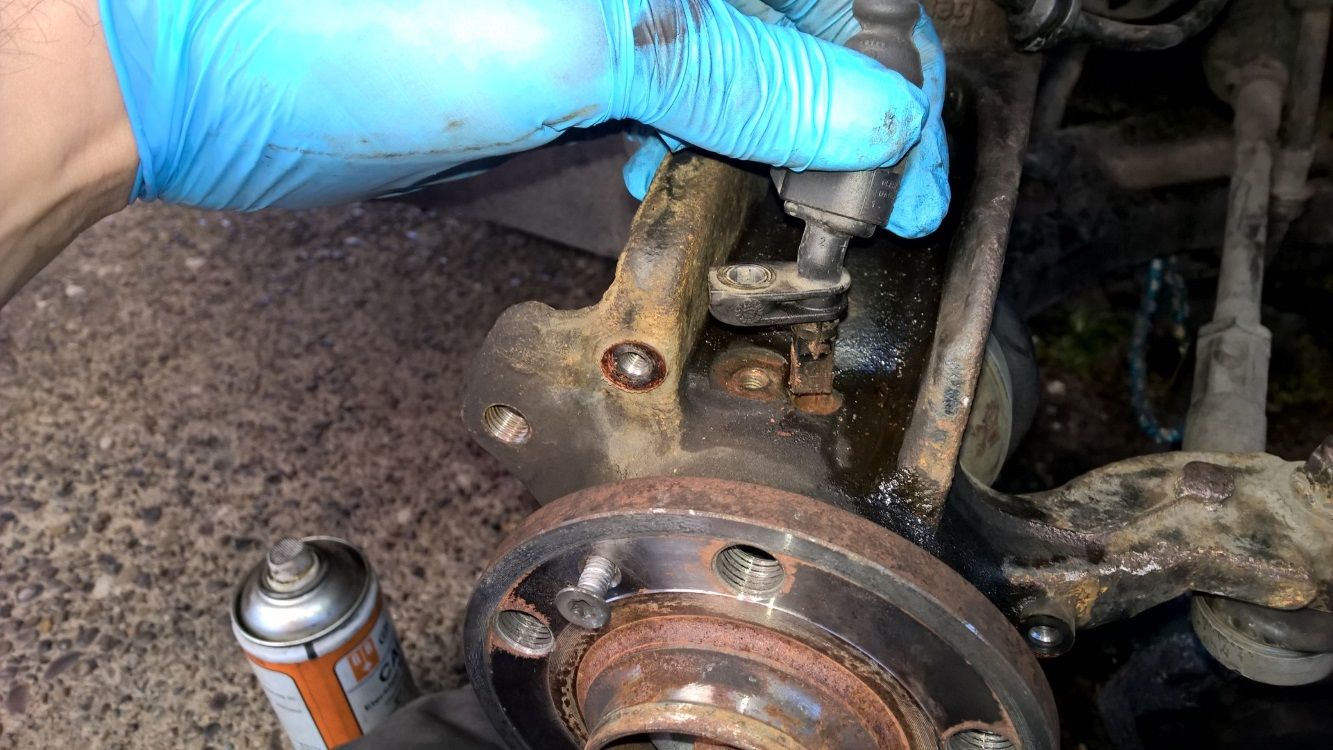 Undo the drop link nut at the strut, I believe this was 16mm, there is a torx on the end of the thread if you need to counter hold it, but it didn't turn for me so that was fine.

Next with a trolley jack, jack the suspension leg up from under the wishbone balljoint until the tension on the drop link thread you undid the nut on is released, then just push it through to release the drop link and lower the jack with the drop link detached.

Below picture is from a different stage but illustrates how to jack from the balljoint: 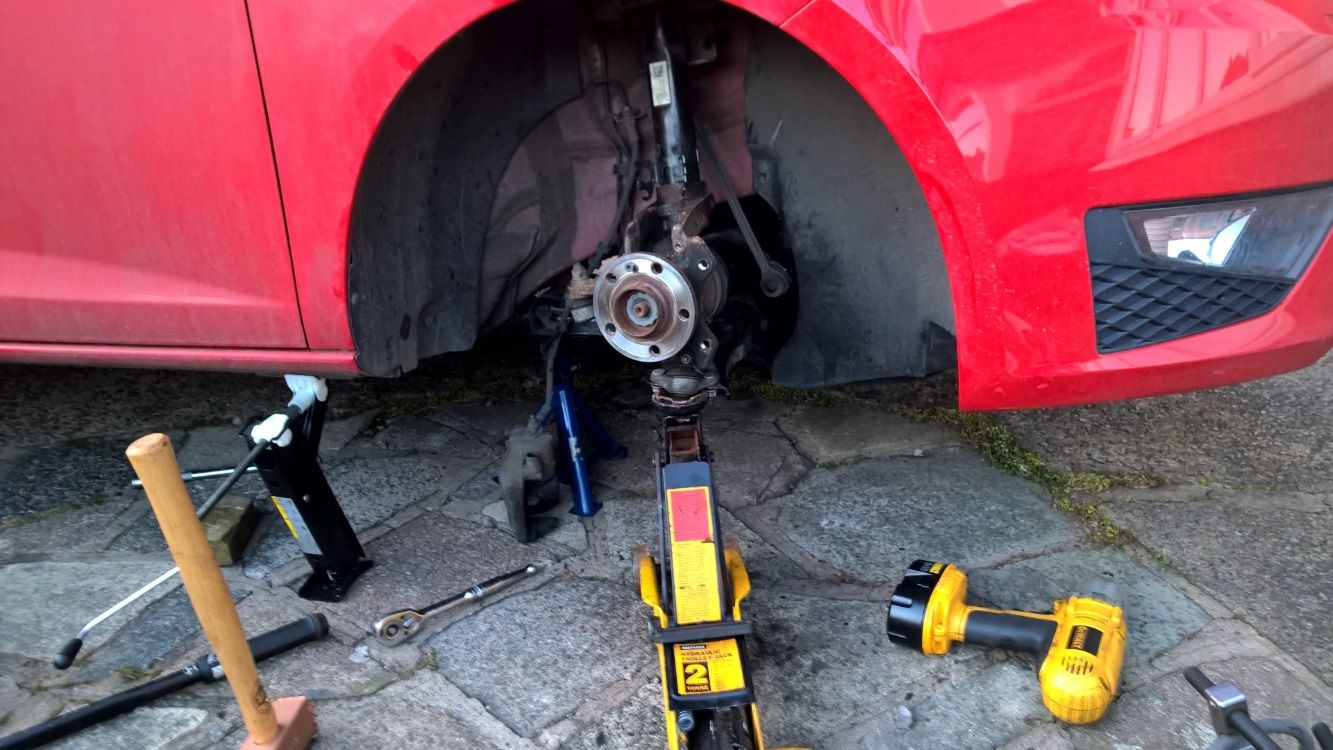 Remove the strut pinch bolt using the M14 Spline socket opposite to an 18mm socket (you can use either side to counter hold), this will be the tightest fixing you will encounter and may need a breaker bar or a long handled ratchet. 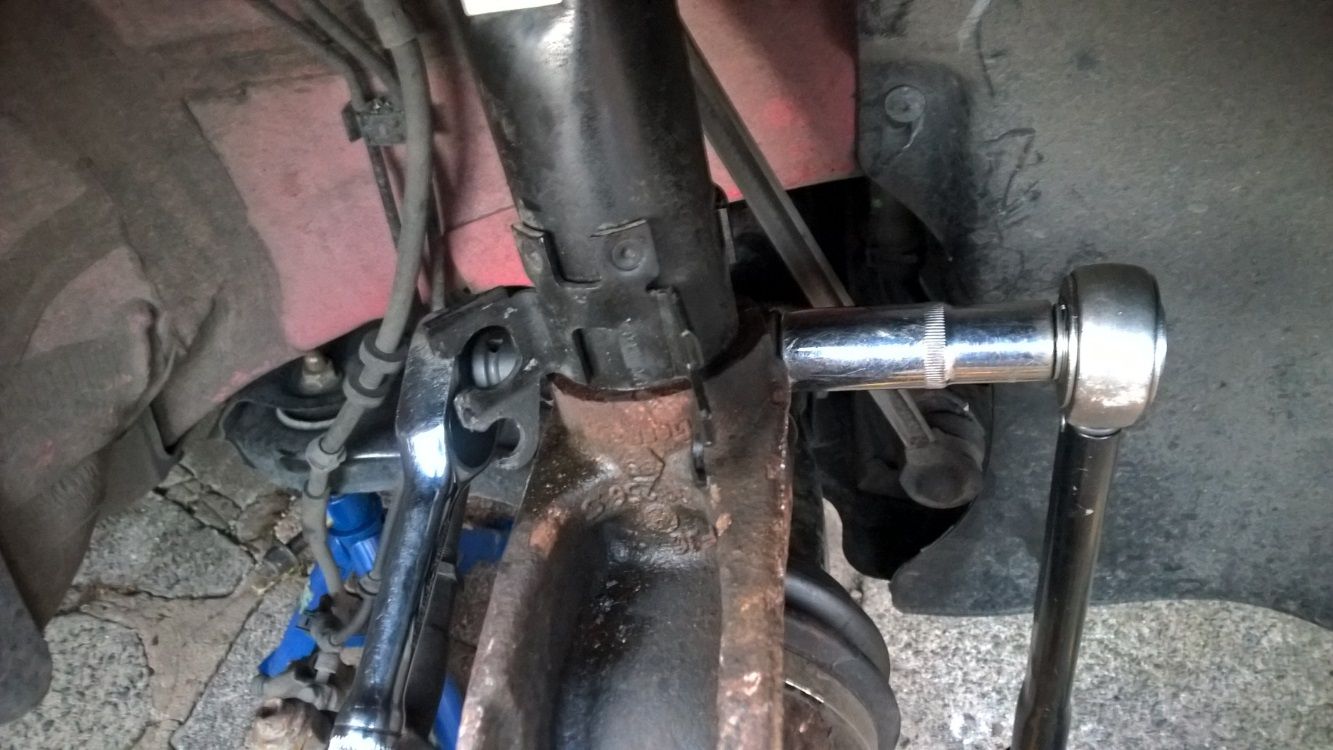 Use a pry bar or chisel to try to separate the cup holding the strut more, I personally used a hammer and large chisel as I don't have any pry bars.. another spray of lubricant is this area is a good idea.

Below picture is from a different stage, but clearly shows what you're trying to achieve in this step. 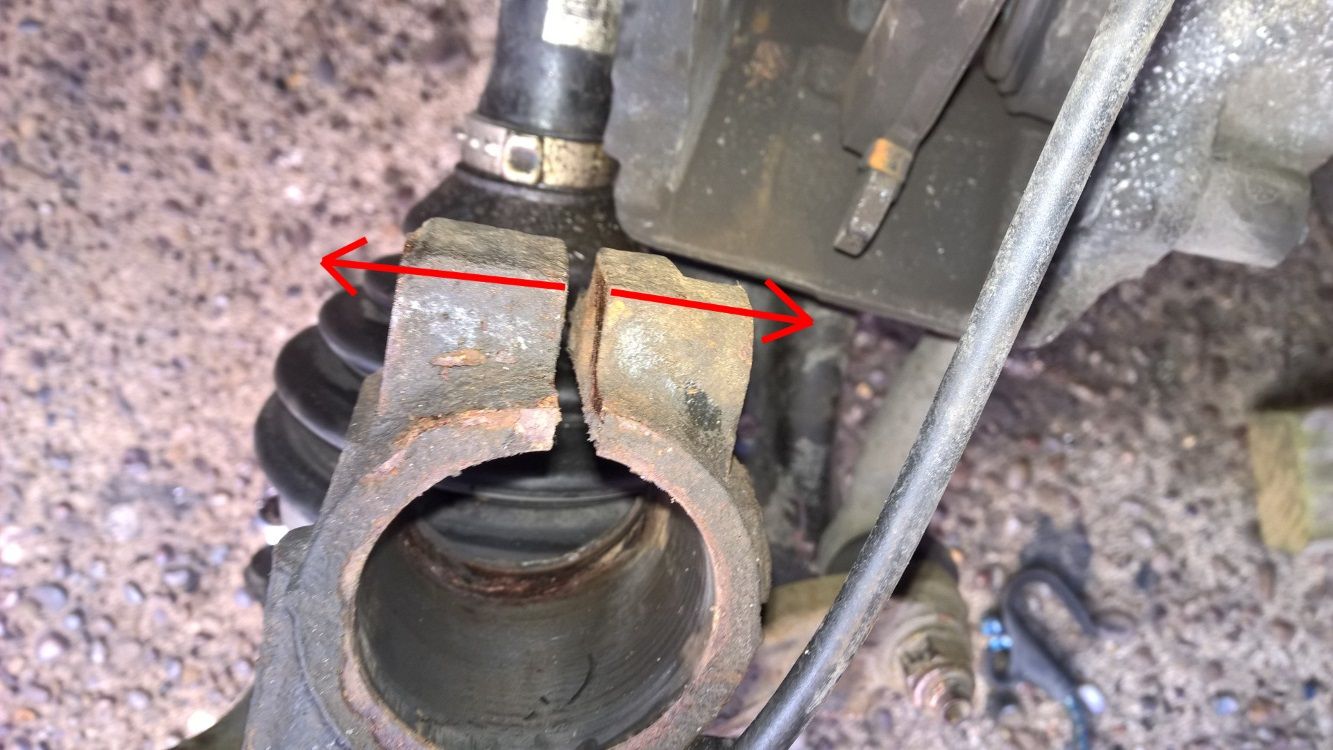 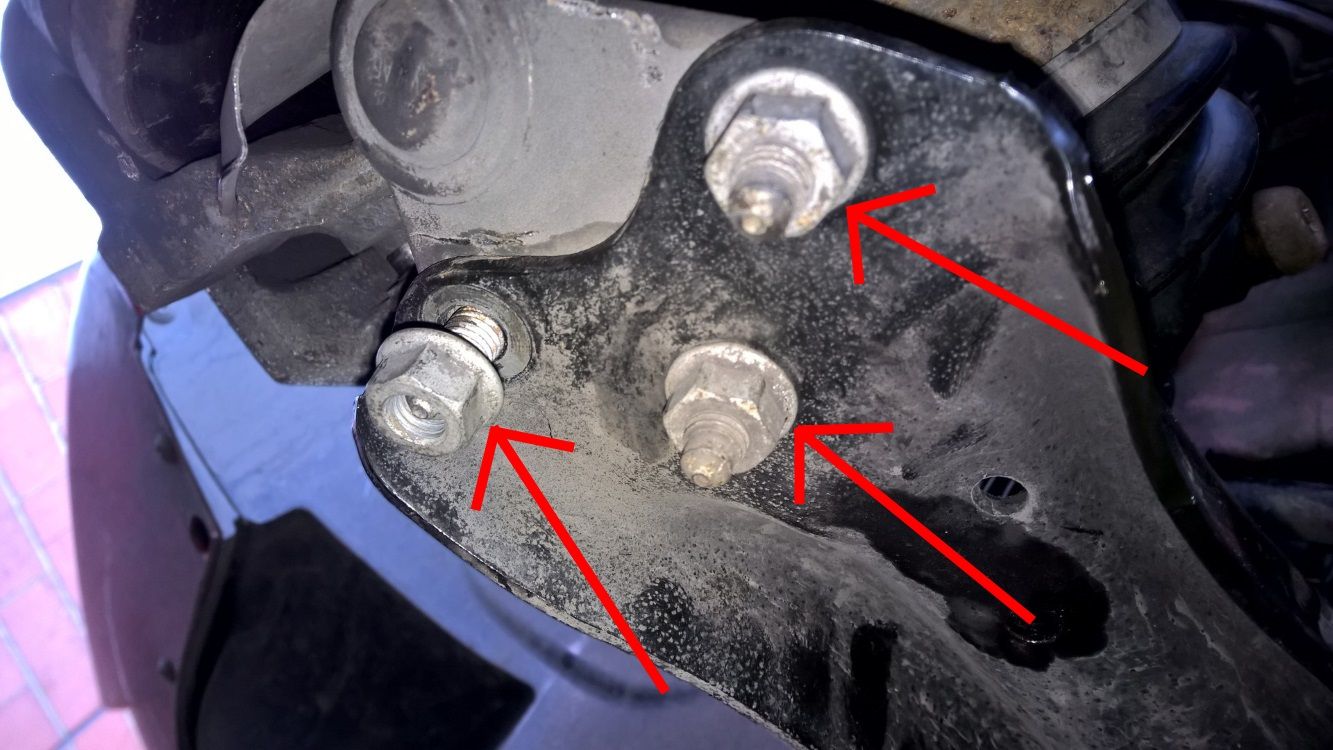 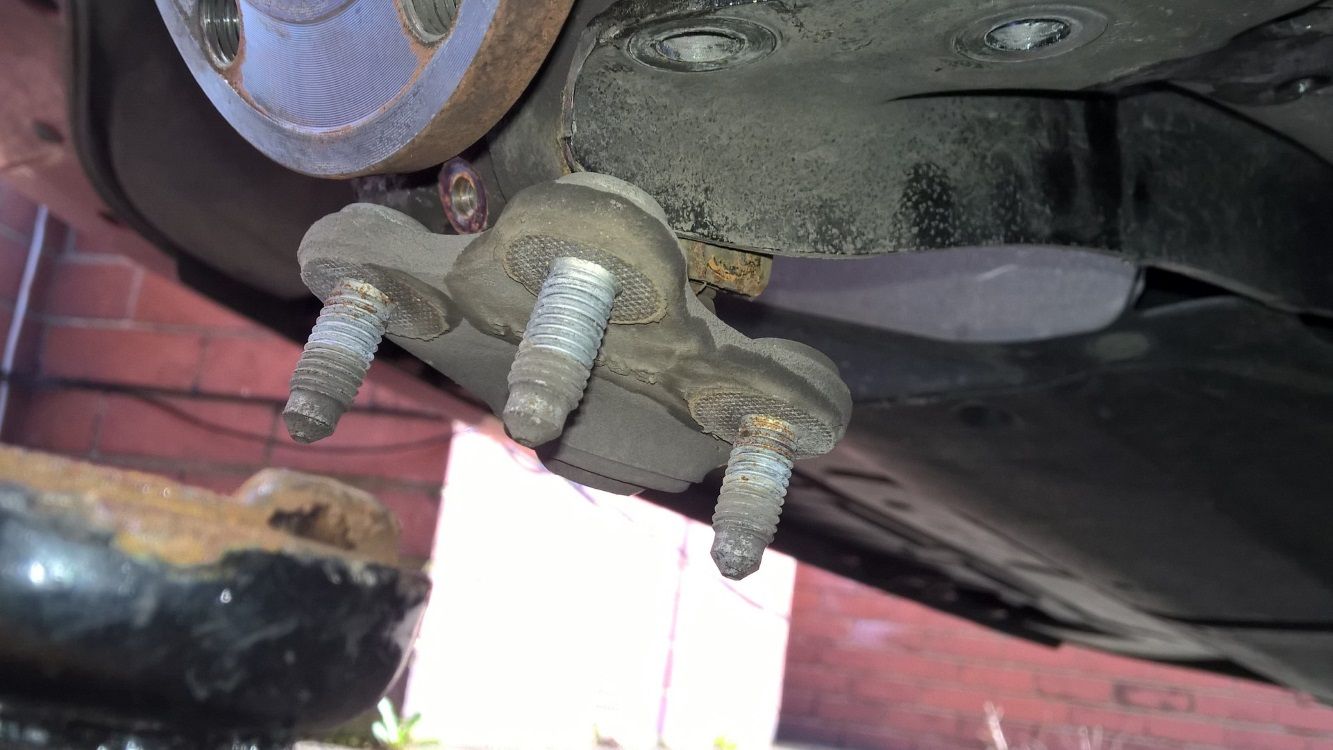 The hub will now have more movement available, at this stage you are in a position to go to town on hammering the hub downwards.. it will take significant force to get the hub away from the strut and will feel unnerving hitting it so hard but rest assured it will come.

Note it is important to use a big copper hammer as to cause as little damage to the hub as possible (the copper is much softer that the cast iron hub).

Pictured below is the area I choose to hit, as you can tell by the copper left over from the hammer: 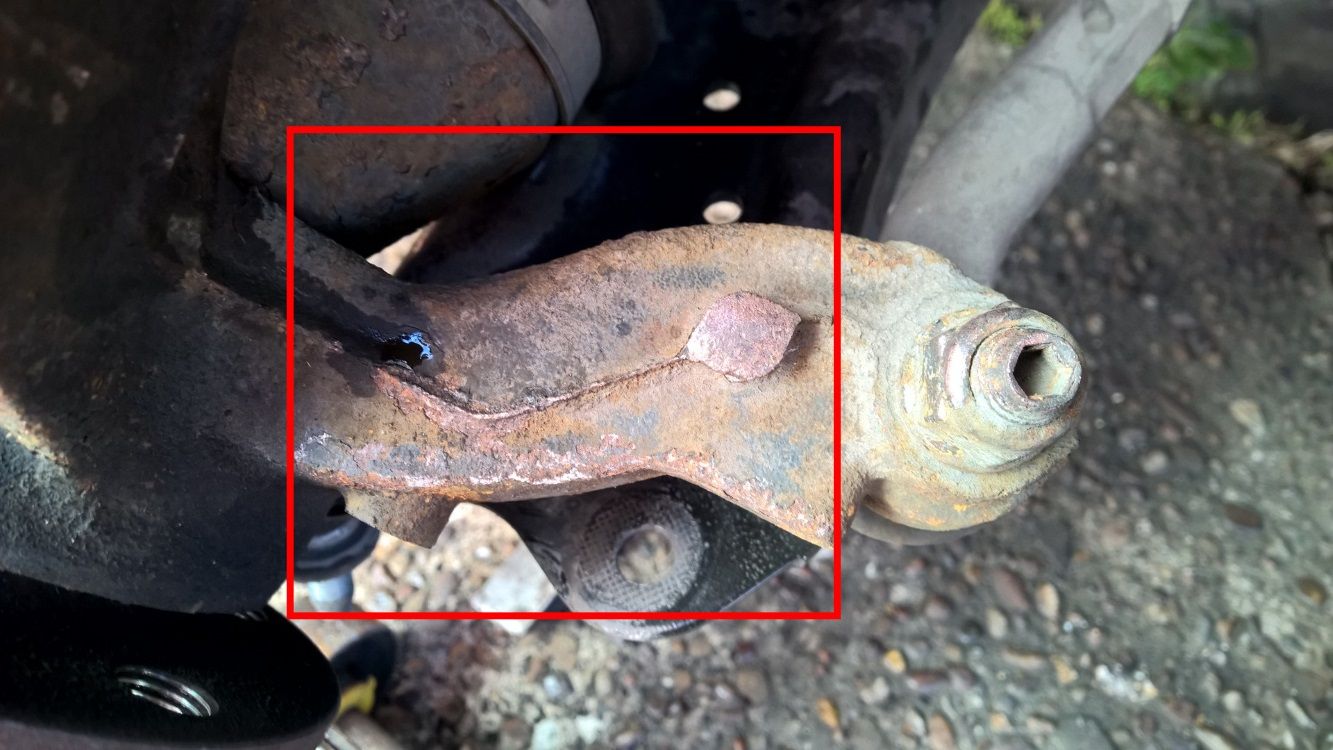 Now the strut is free get an assistant to help. One of you needs to finish undoing the top nut in the engine bay whilst the other holds the strut to prevent it from falling once it is free: 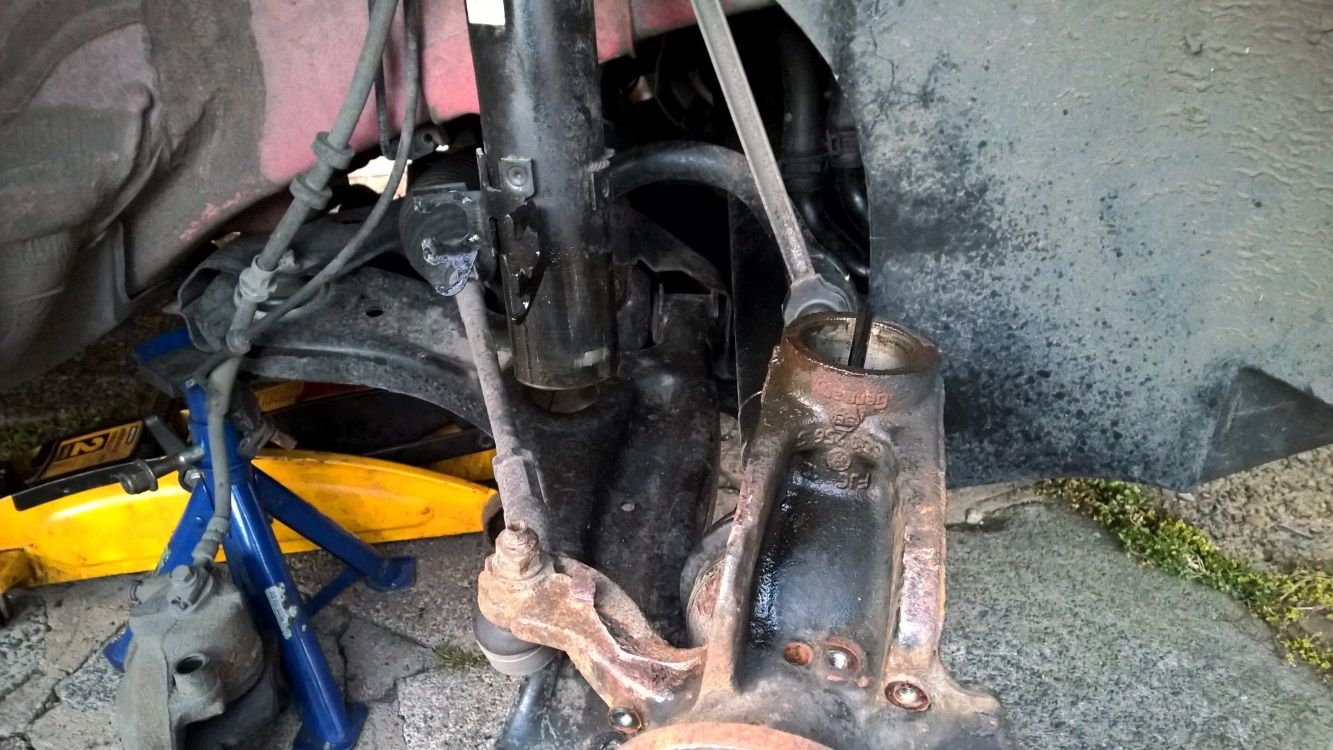 With the strut out, take note of how the spring sits at the base and top of the strut for when you re-install a spring.

Start removing the top nut using the same method as used on the nut in the engine bay, before completely removing you should be able to feel the spring is loose and tension is relieved by rattling the spring. If its still tense you need to screw down the spring compressors more before removing.

When removing top mount and bearing take note of the order they go together.

(Again picture below is from another stage, but illustrates removal of top nut) 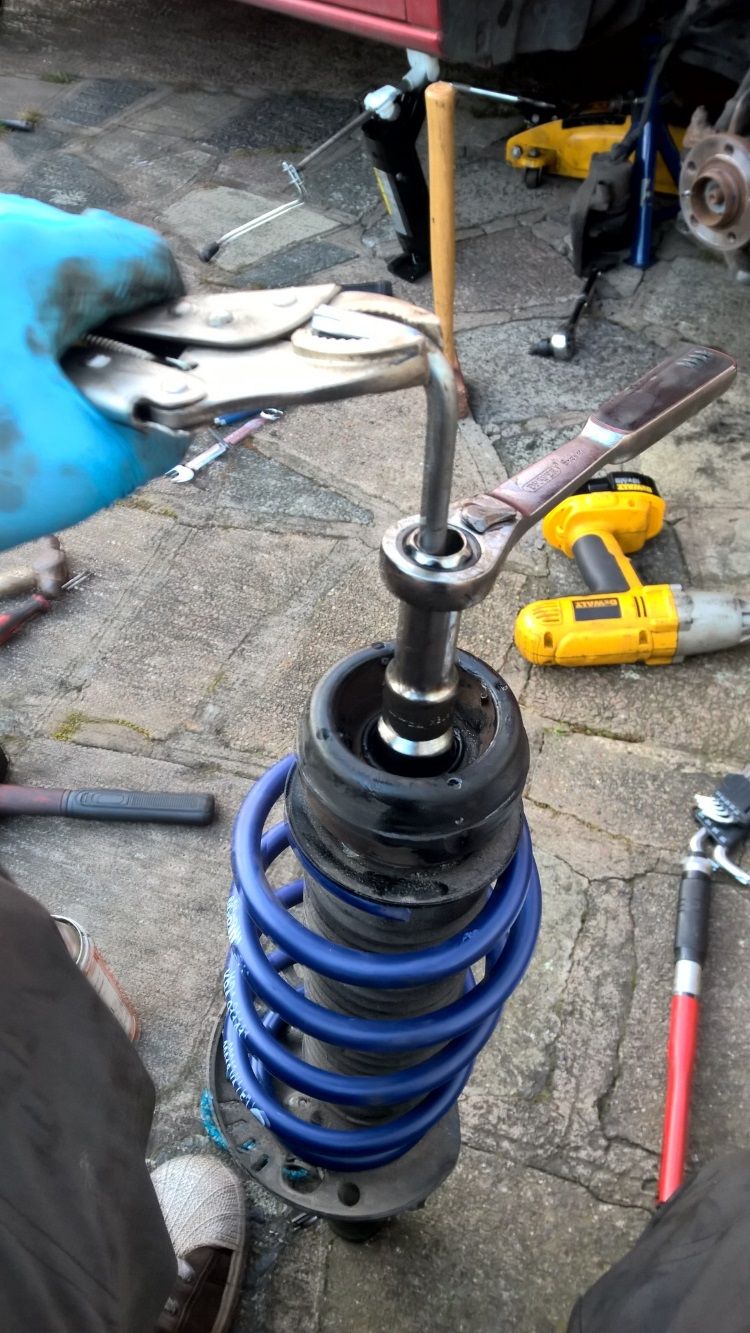 Spring is now free to be removed, and changed. 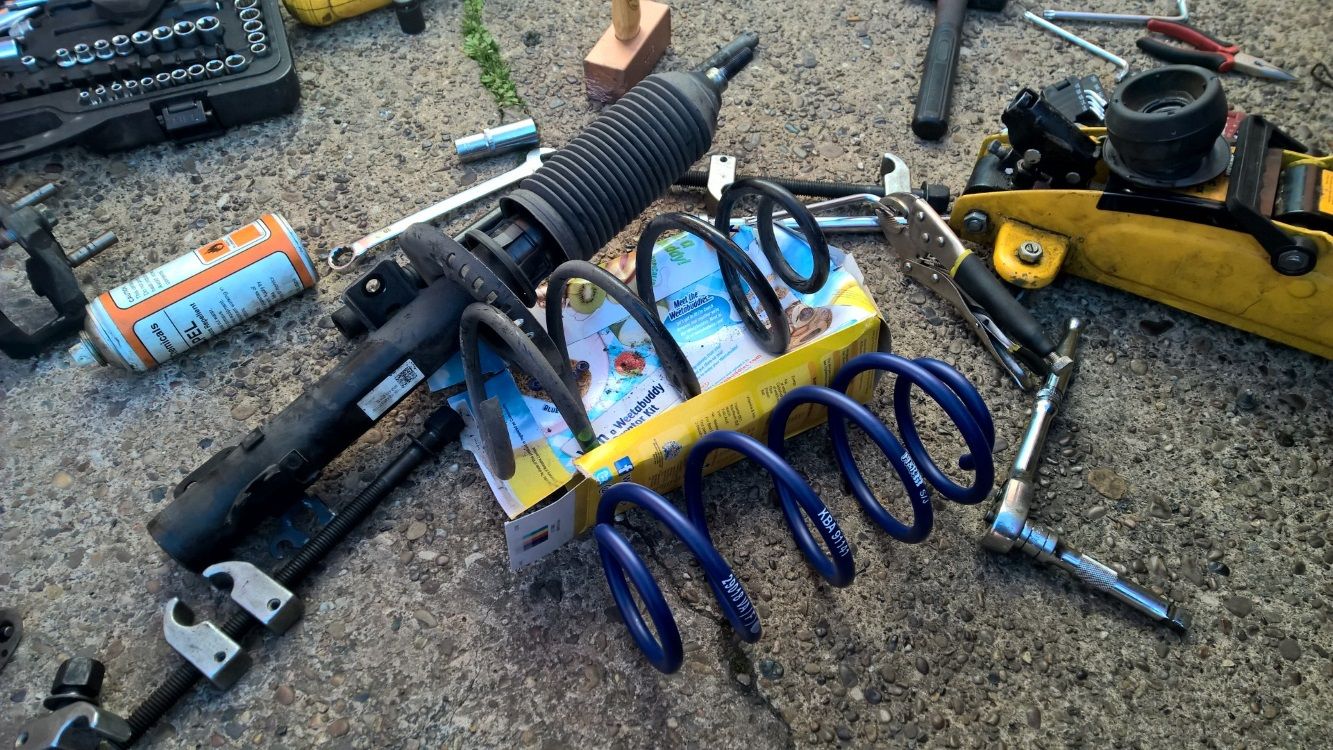 At this point its now time to reverse the process with the following notes in mind.

I don't have official torque figures, I'm hoping someone can help me with these as i'd like to re-check the torques on my own car and add them to this guide. I used 50nm on wishbone balljoint nuts and the suspension drop link and I used 100nm on the strut pinch bolt - I just did up the top nuts up tight.

-Next put the ball joint back onto the wishbone and tighten up the nuts, tight by hand with a ring spanner should be fine (again I don't have torque settings)

-Pry the gap in the back of the hub a bit further and clean the inside of the hub cup and lubricate before trying to reseat the strut, it will help it go in easier. Now push the hub onto the strut to get it to seat.

-Do up the strut pinch bolt while the balljoint is still jacked up so you know the strut is all the way seated. The nut end of the pinch bolt goes towards the front of the car if you didn't remember, again I put 100nm on this but I am unsure of the correct figure.

-Whilst the hub is still jacked up re-attach the anti-roll bar drop link, use the trolley jack to line up the hole on the strut with the drop link thread.

-Remember when re-fitting the brakes to fit the splash guard first, I had to take to take the brakes off again because I missed this. Also remember to re-fit the anti-vibration clip to the front of the caliper