What did you and your ateca do today?

I might give this a bash, but I can't see any way of it looking OEM. For a start, it appears that only the face of the letter gets wrapped, leaving the return side as chrome.

Then of course, there's installation error by way of shaky hand!

If not it’s trusty plasti dip

If it looks rubbish just peel it off on both options

Not strictly today, but yesterday returned from a few days in the Peak District, nearly 500 miles return.
Reactions: Tell

Sounds good. Have you found the useful Covid mask hooks ?. Couple of hooks behind the front passenger seats that are handy to put a mask on either side when you get back in . I think they are an undocumented feature for a front dog guard.
Reactions: Loadmaster748

Had a remote control battery changing session on the Kessy keys Ateca and Arona.

Not sure whether the newer Atecas have moved to 2032. Above the trick of getting these into the original 2025 remotes with the 50% capacity boost. Gone over to Duracell now on all of them. Got two years use out of the aging Panasonic's 2032.. but from the original blister pack unused the spares were knackered even thou they measured 3.3 volts... not delivering the amps. Dim remote red light when pushed and no Kessy open. Duracell dated to 2029, here we go.

Four months in and 1900 miles - all good. Really am impressed by this car.
Reactions: iScoTT29, Alorjosh, Syphon and 1 other person

Had the BBC R4 logo turn into the R3 one yesterday.

Deleted the station and had another go. Newer firmware you tap the button and hold again to get the image. That didn't work. Mused over whether the BBC was broadcasting the incorrect logo.

It's that time again for a new radio station and getting the logo to match Circa 2018 Mib2 units came with the radio logos pre-installed now they are transmitted over the air on some stations others they are not or incorrect ones. The BBC...

Already got one downloaded logo, downloaded another one from the media.info site.

Went out to the car - it had fixed itself .

So yesterday the DAB and FM station logo wasn't correct in these parts... today fine.

That web site is useful on the new tricky stations where the old logo is sometimes shown or no logo at all. BBC and RTE transmit logos, varies. In the earlier firmware they were preloaded.

Well we updated the mib2 high maps today to ECE 2021, good till June 2021 when the next update comes out. All good. You have to make sure your FECs are up to it in Mib2 high. Those with recent non face lifted mib2 highs can take advantage of the one year free update period by checking the FeCs following the read reckoner thread (mostly Cupra people these days). Once out side that ££££s to get the unit turned into a retrofit or buy the maps one off if you can from a dealer in the UK. Went the retrofit route so the 2016 Ateca has 2021 maps ?. I'd still be on June 2016 if I hadn't gone for the retrofit approach in 2018. Nice to get the maps integrated into the cars system as designed rather than an adjoint.

The download links are often discovered ahead of the main release wrapped in a web page. Occurred this time round. Where VW, Skoda and indeed Seat people load up. Reasons slightly unknown why Seat always lags in the publication of maps. Sometimes Skoda beats VW to the mib2 high one, like this time round.

This resource is applicable to all Seat navigation systems plus other Vag brands which are MIB2 / 2.5. It is built from the knowledge base on the Leon forum from a long running thread which has the advantage of tracking the twists and turns over...

Facelift cars with Mib3 early days on the knowledge base. We know it uses Here Maps cartography moving away from the TomTom of the standard unit, same as Mib2 high system. You get your free one year updates and a connection app.

Confirmed delivery for Friday the 13th November so I ordered my new USB C cables and boot liner. Not to exciting but essential!!
Reactions: iScoTT29, Tell and jcbmally 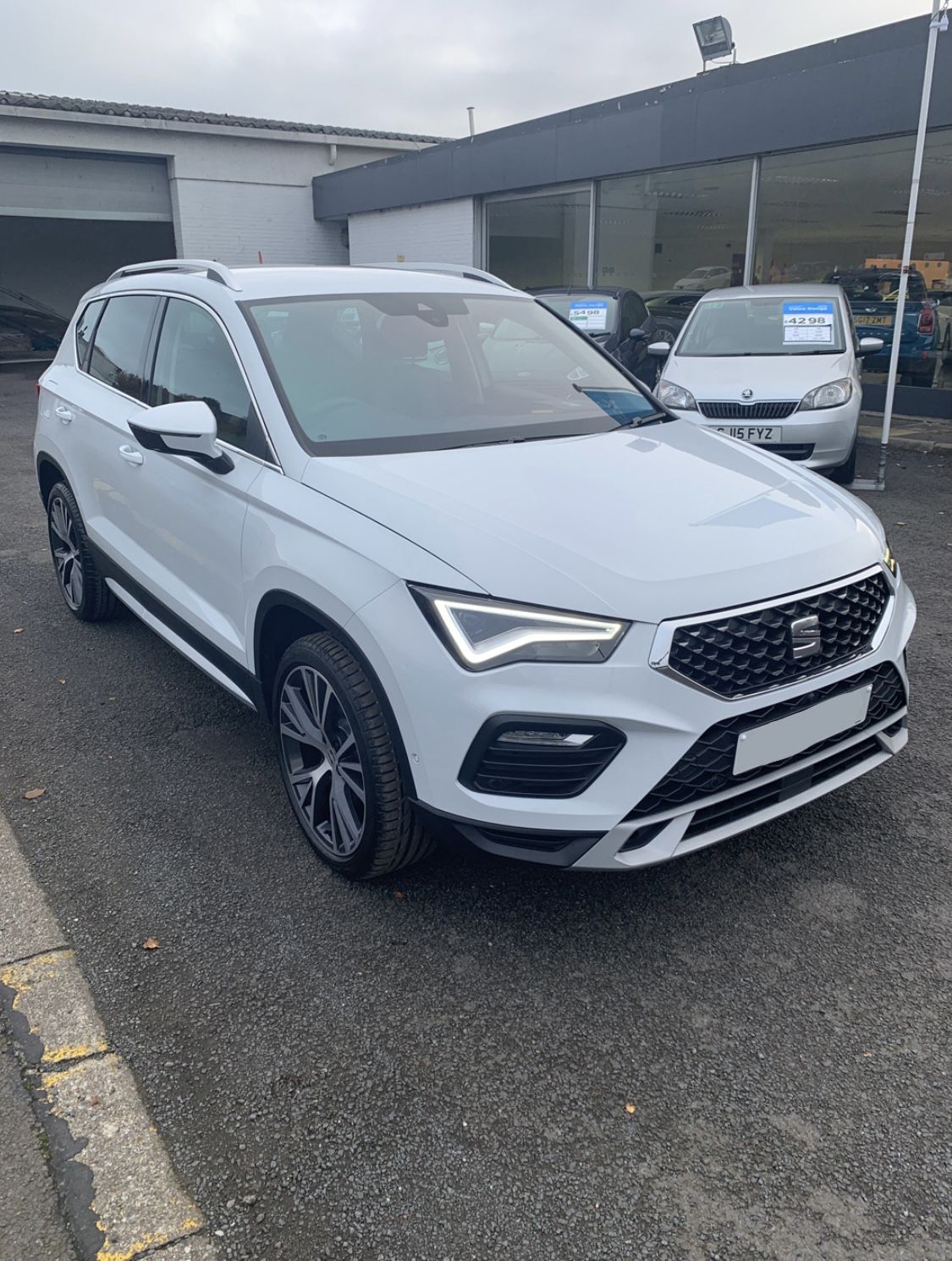 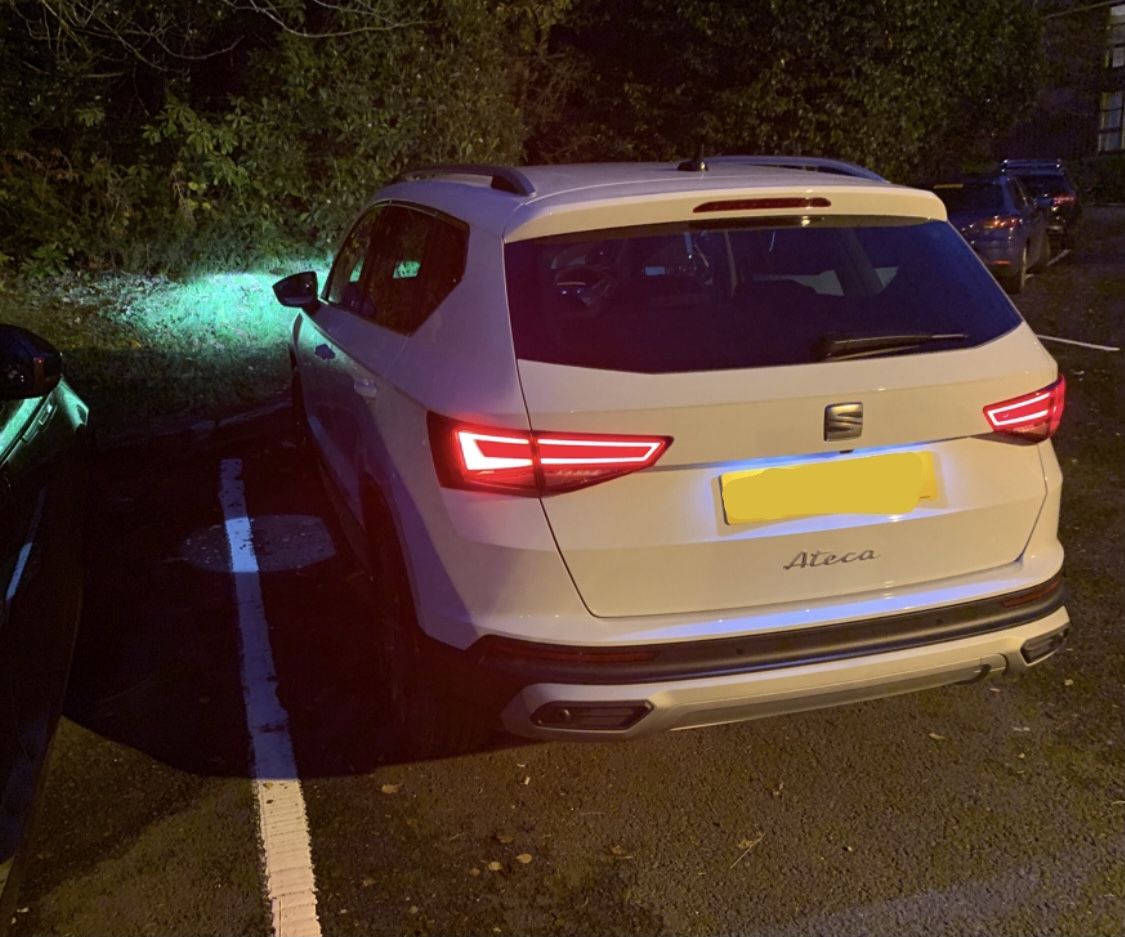 Picked up my new Ateca Xperience lux today. Over the moon with the car. The Technology in it is miles ahead of my mk3 facelift Leon. ACC is a great thing during rush hour traffic!
Last edited: Nov 6, 2020
Reactions: jcbmally, Loadmaster748 and Tell

New Ateca FR arrived on Friday at 7am! Really impressed with the car and the new steering wheel and infotainment is miles better than what was in my MK3 Leon Cupra. The 1.5 is really eager to get going, more so than in our Kodaiq 1.5 tsi 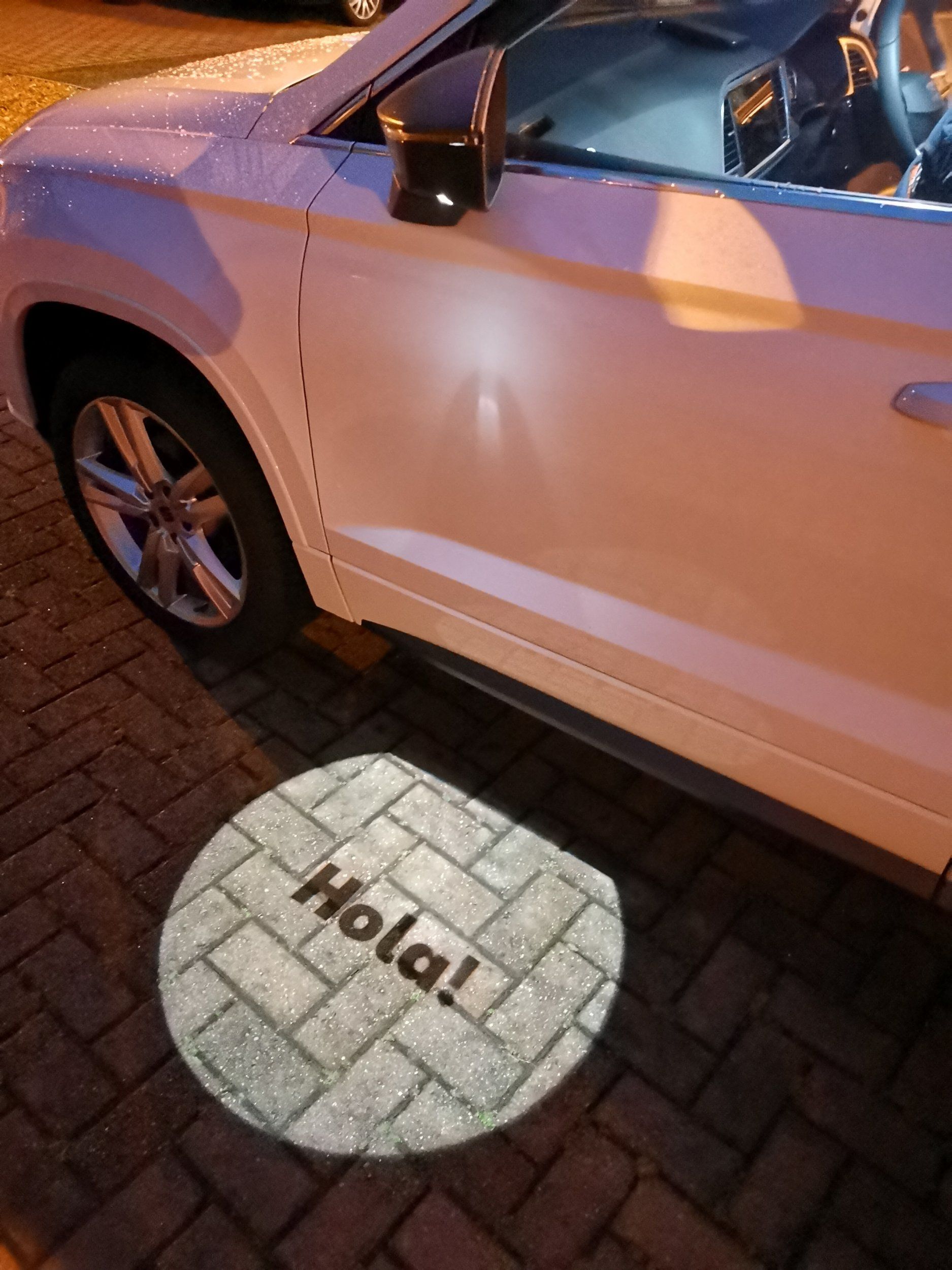 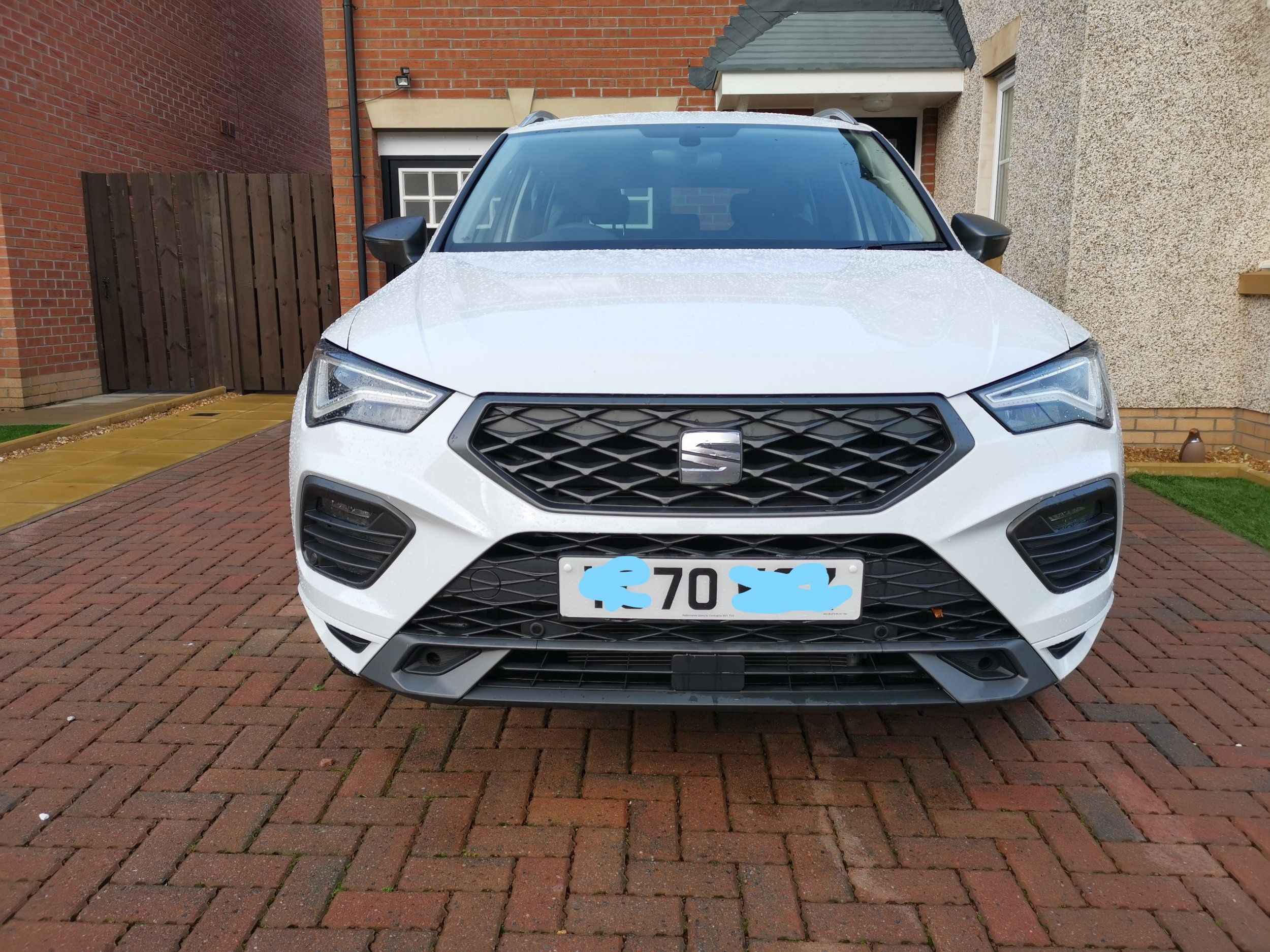 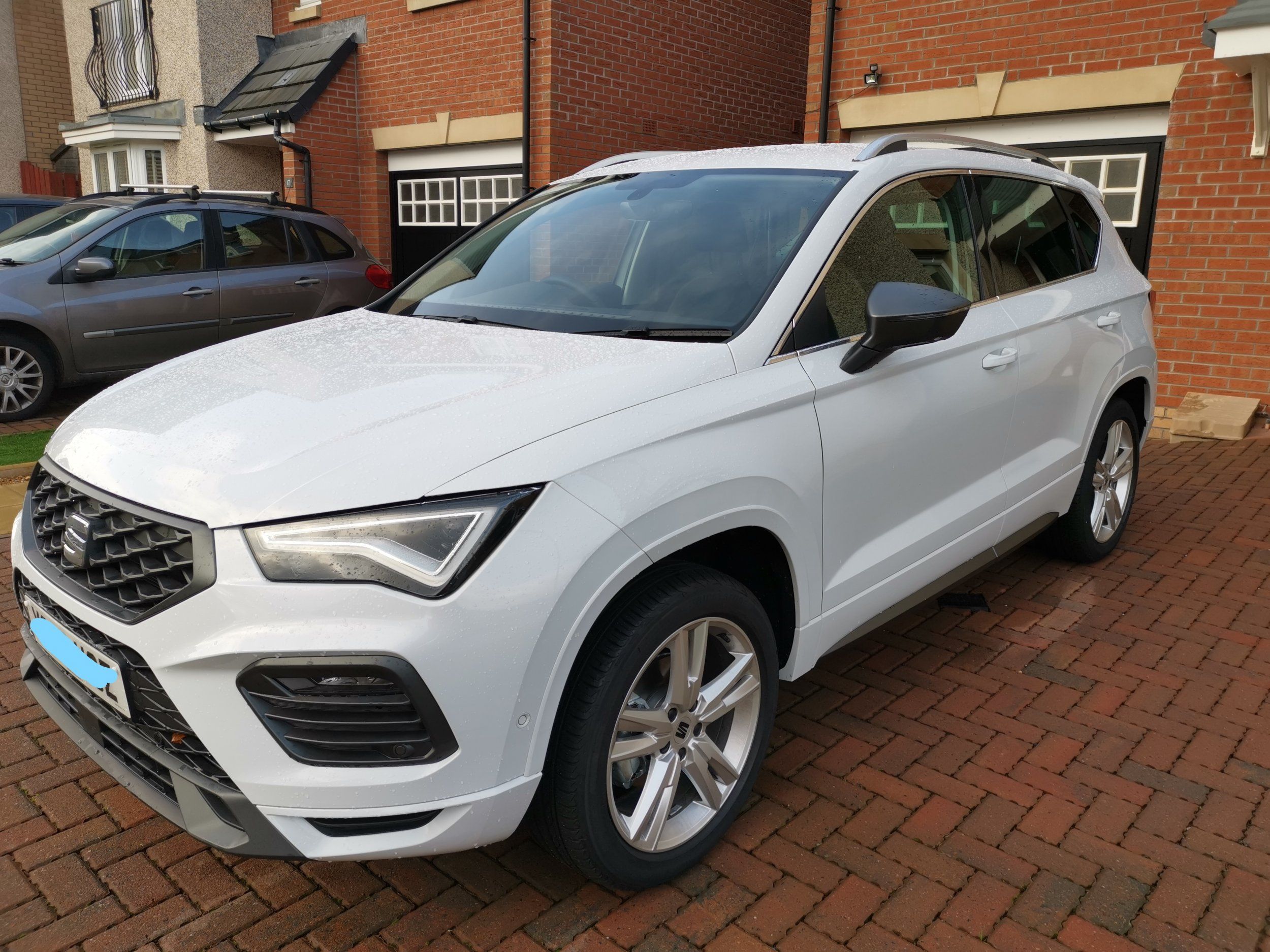 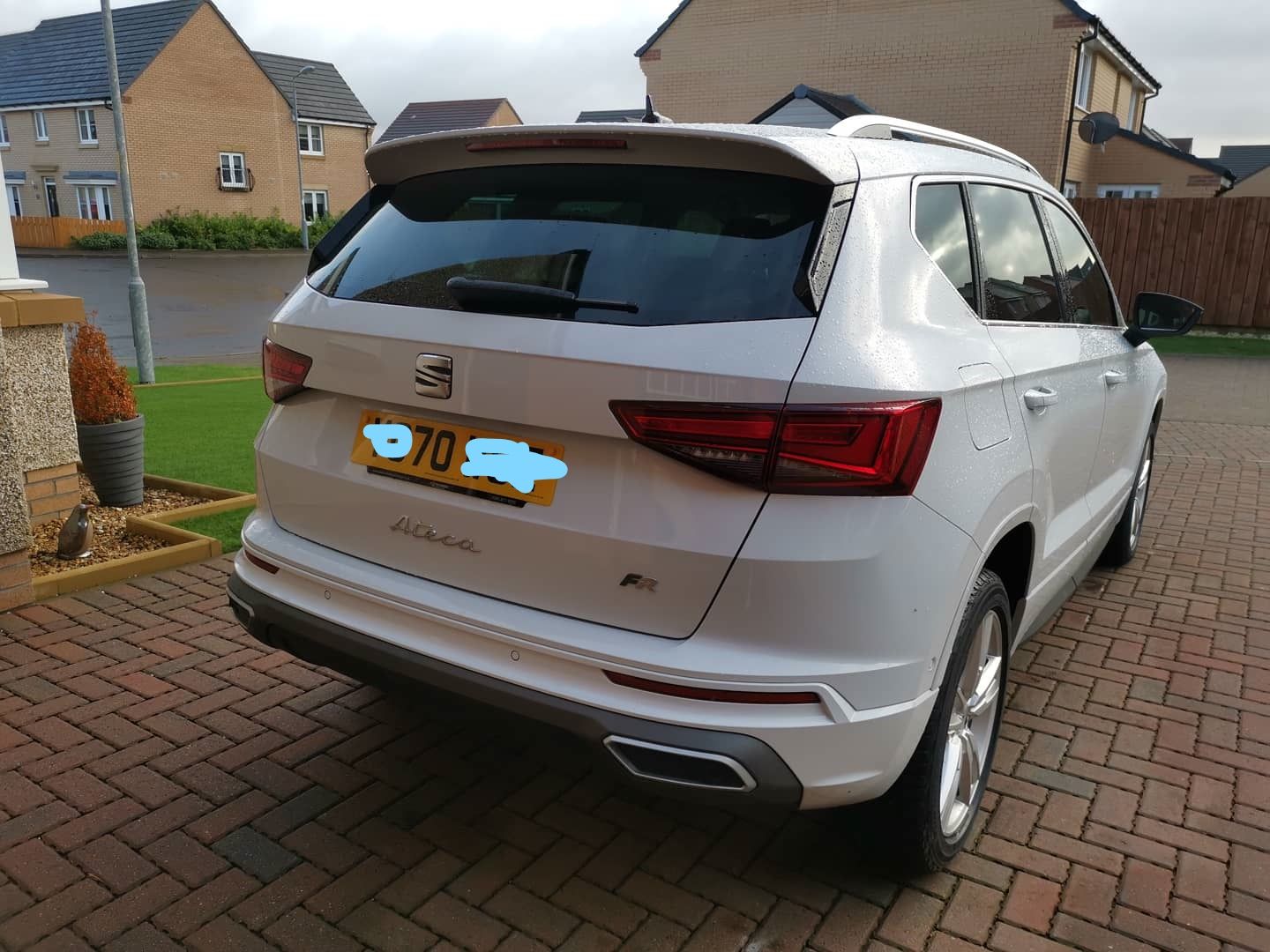 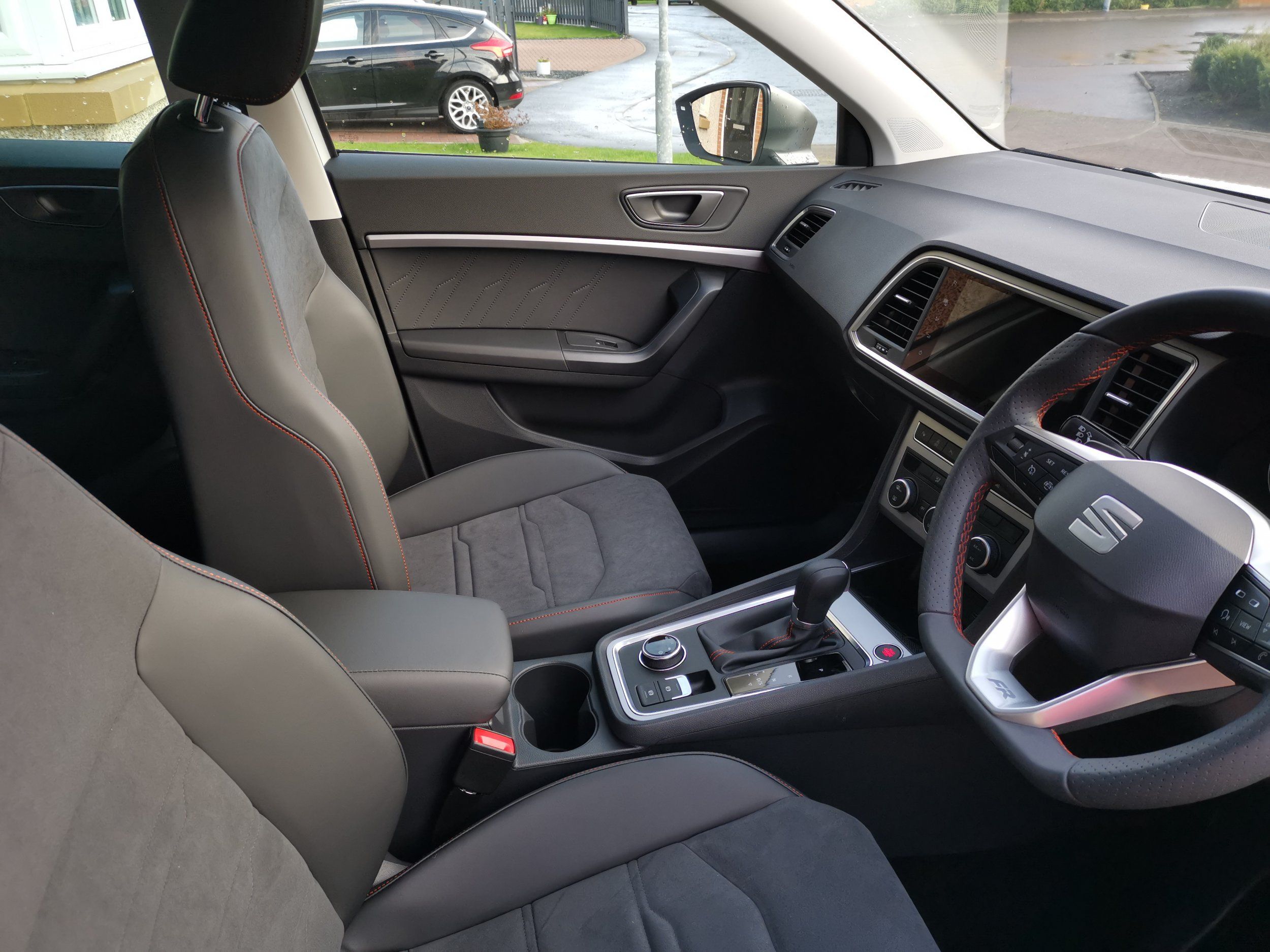 Turned 2,500 miles today after five an a half months of ownership since new. An absolute pleasure to drive, quick enough for what it is and handles so well.
Reactions: Tell

Felt the new car was a bit sluggish off the line so after 1000 miles I plugged in my carista and noticed 'throttle response' was set to gradual by time. Change it to 'direct controlled by threshold' and its completely transformed the driving experience. I can actually pull away quickly now without having constant wheel spin. Also for the last week I've had this new throttle setting and noticed my average MPG is around 4/5mpg higher with this change surprisingly.
Reactions: Danny77, Loadmaster748 and Tell

iScoTT29 said:
Felt the new car was a bit sluggish off the line so after 1000 miles I plugged in my carista and noticed 'throttle response' was set to gradual by time. Change it to 'direct controlled by threshold' and its completely transformed the driving experience. I can actually pull away quickly now without having constant wheel spin. Also for the last week I've had this new throttle setting and noticed my average MPG is around 4/5mpg higher with this change surprisingly.
Click to expand...

Which engine is in yours, the 1.5 petrol turbo?

Loadmaster748 said:
Which engine is in yours, the 1.5 petrol turbo?
Click to expand...

Made it into a Karoq

With Seat not updating the mib2 high / plus maps this time round made it into a Karoq with "lifetime" maps... thanks to assistance by people round here (hunted them down

). Slightly difficult birth due to documentation not being clear and some in German - got there in the end. 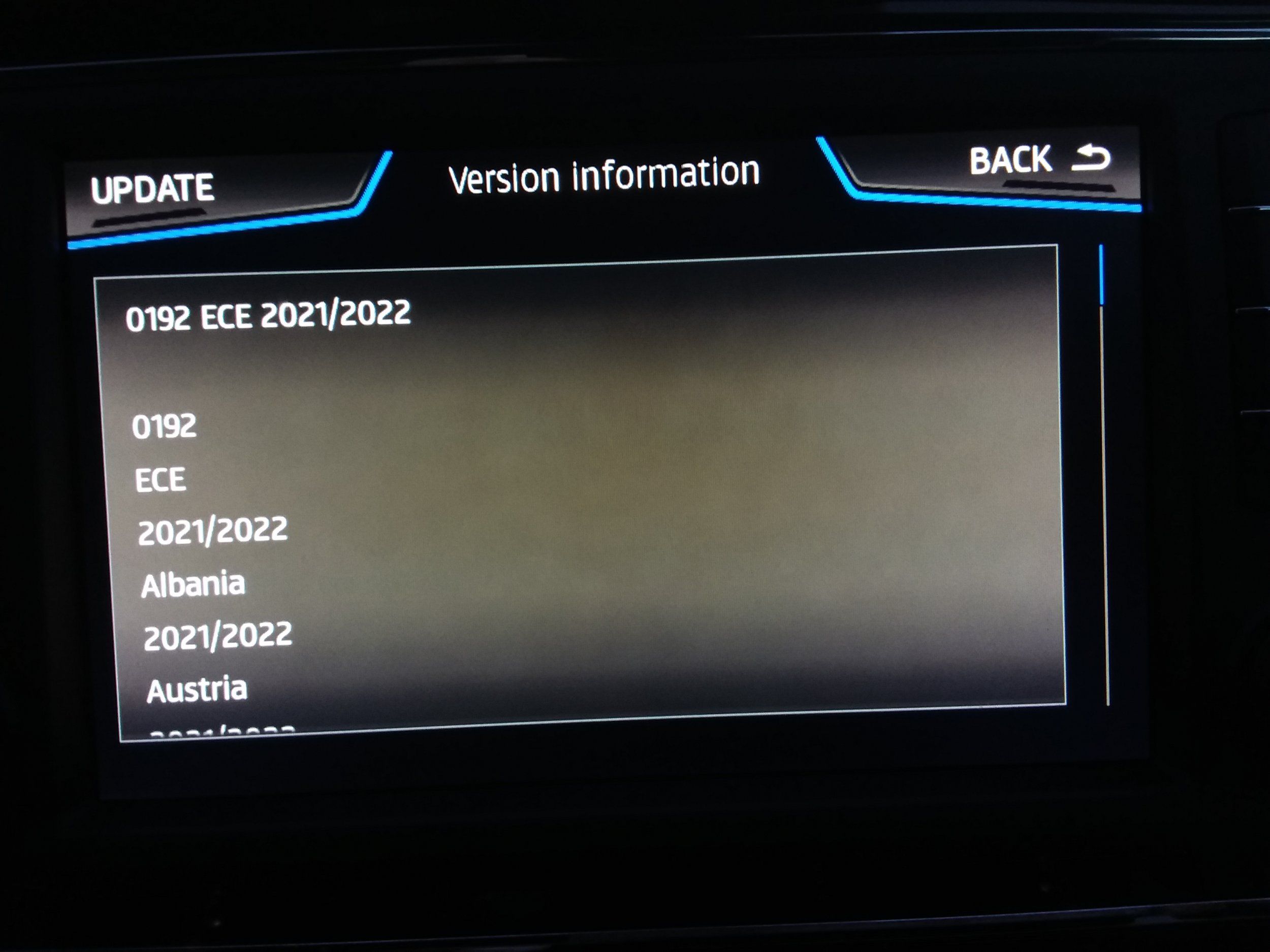 I've edited it all into one post revising from the comments that appear just before up to the 20th, so the comments don't apply. All risk is down to the individual if they brick their unit in the process. Hence my careful approach.

Now it drives like an Ateca with maps of a Karoq

Basically still Seat firmware with Seat garages shown on the map, no change there. The part number of the map isn't shown in the picture because the release didnt include the part number in it or Seat navigation FeC to make it work. The method as I understand it uses a developers tool in the firmware to perfect the action of adding your own additional FeCs. Probably only if you own the car outright would you consider the mod and it's at your risk. Some retrofitters achieve the same results, seen a Spanish example. This circumvents a retrofitter by using Chillout's SD imported GEM tool and the M.I.B. collective as I term them coding. Keeps your legacy mib2 hardware up-to-date with maps. Free if you do it yourself.

Currently the tool has solutions for the firmware 1219, 1338, 1376, 1409 and 1447 (as of 24/06/2021). You can stick with your current firmware and take the FeC adjustment which adds Skoda long life navigation FeC + some other extra FeCs (e.g. sport gauge). FeC list can be edited yourself. Default list drops Mirror and Seat apps (never worked well), adds sport gauges, Skoda and Seat long life navigation code. These can be changed.

If you aren't on the firmware listed you can apply to the nice people in the M.I.B. collective to do you a module, that then becomes part of the tool for other people coming along after on the same release or you can go for broke and do a firmware update to say 1447 (option 1 in the notes).

I would say all options require a skill level with previous VCDS / OBDEleven experience and either map updates or firmware updating (e.g. not messing up file downloads for uploading into the unit). If happy with the current firmware, option 2 (stick with current firmware just update FeCs) is relatively safe if you tick the experience boxes. Option 1 is the higher risk one.
Last edited: Jun 25, 2021

In case you've missed the announcement, time is running out to book for our annual meet on Sunday 3rd October @ TRAX Silverstone. All SEAT and CUPRA models welcomed, this is a static friendly social meet with goodies for attendees. [Find out more and how to book] 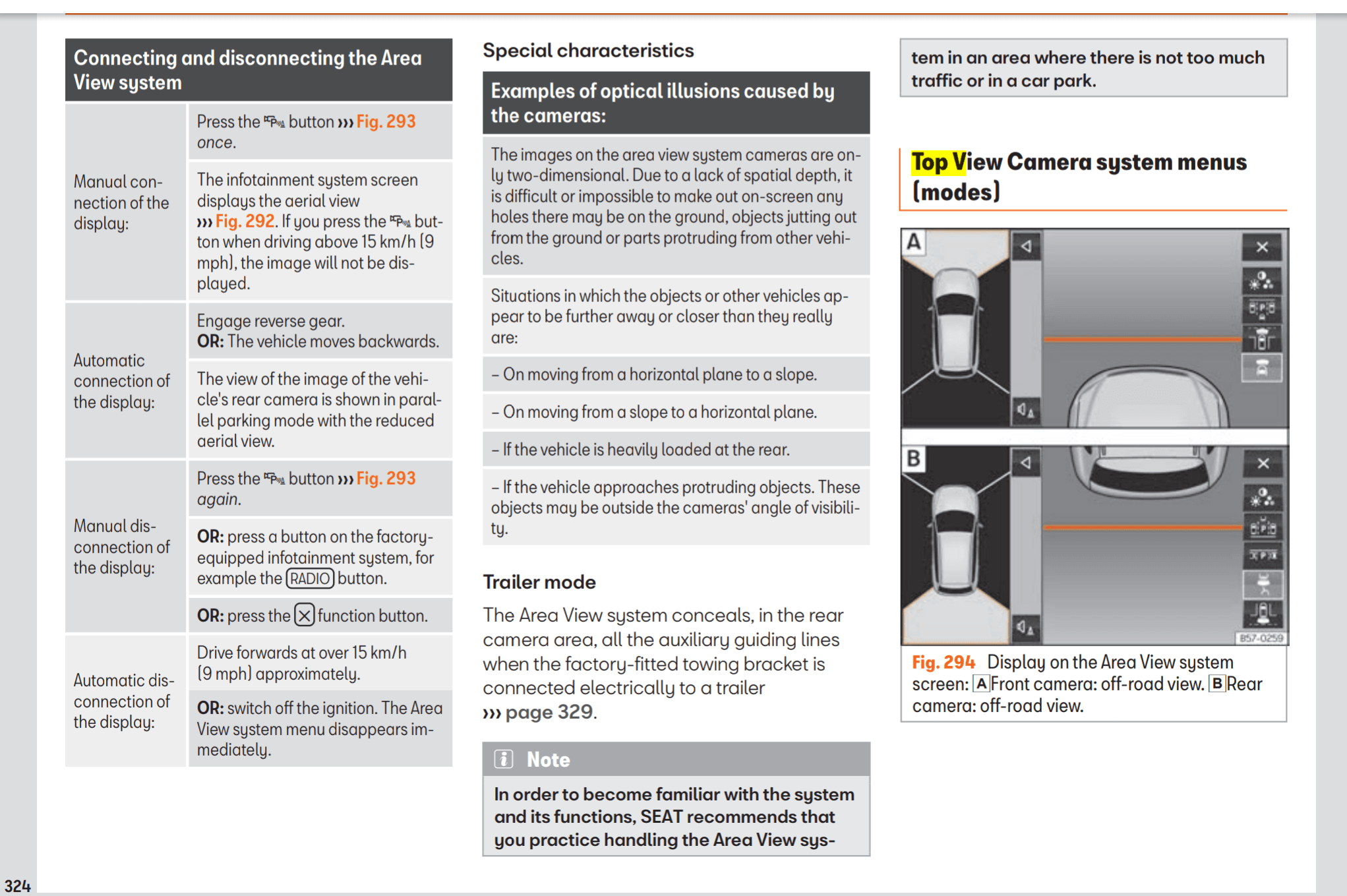 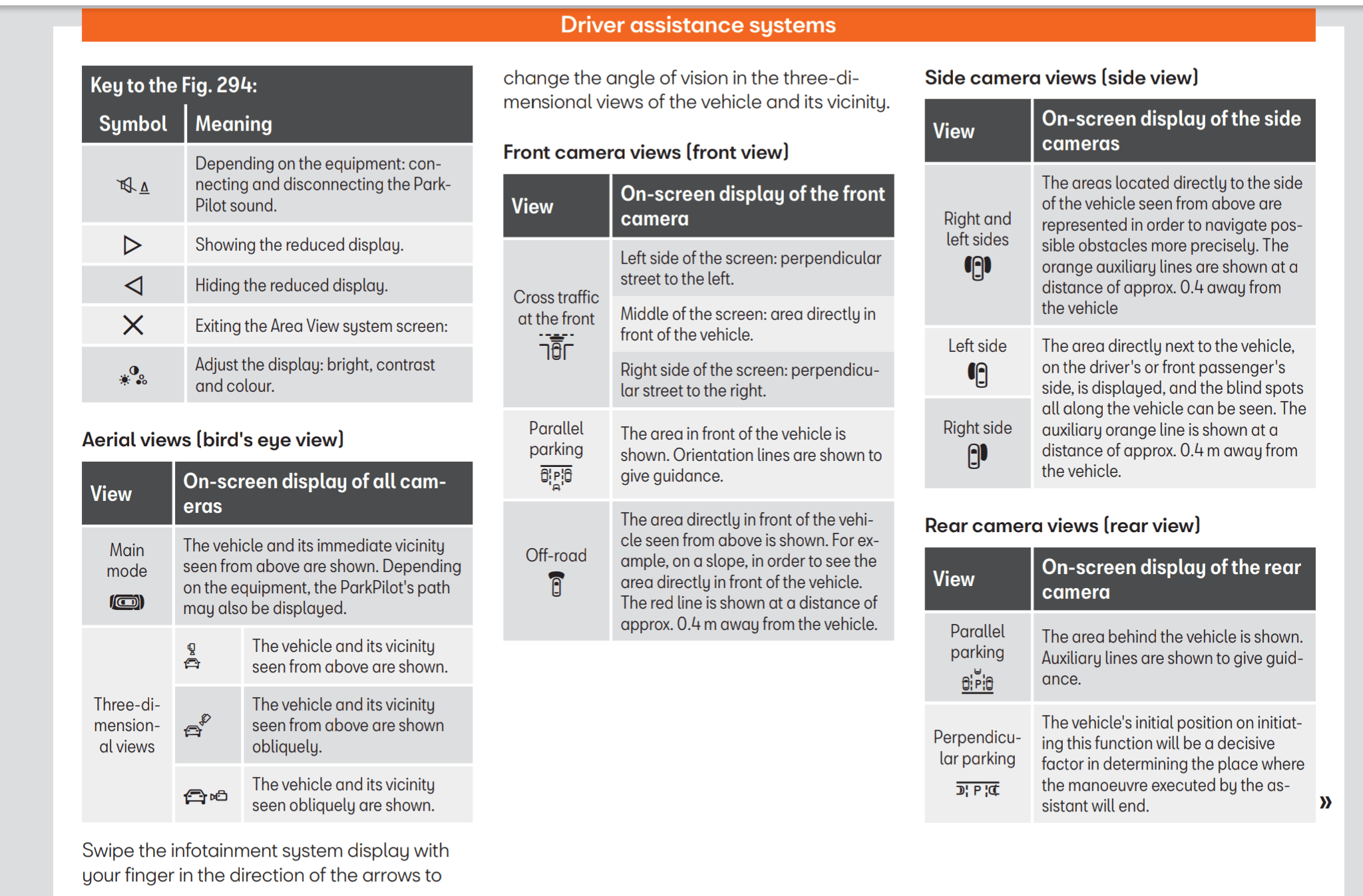 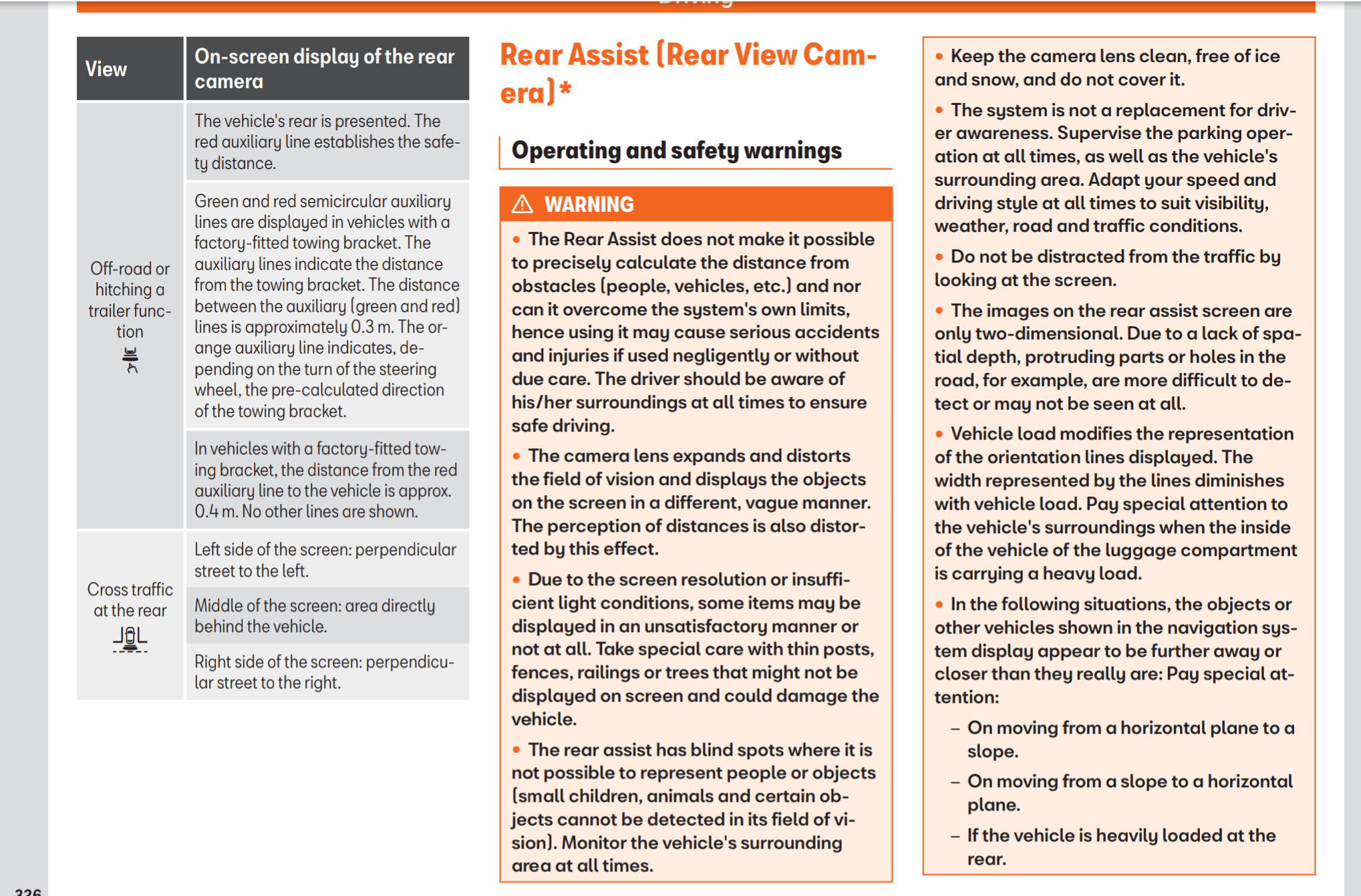 In terms of brightness on the overall screen that's on automatic and needs coding. I didn't think the screen was too dark just the top view image. Brightness and contrast is in the Top View screen.

For coding you have the delights of the settings covered by Don (DV52) in this thread and elsewhere. End of May one where he covers the 5F values to someone asking. Saved from that one, more radical.

Hello, I just picked up a 2018 Golf R Spektrum and have a puzzling question for everybody. I can’t seem to find much information on google regarding this issue. At night, you adjust the brightn

The brightness had been getting increasingly difficult to make out the top view image in bright sunshine whilst backing the car back into it's parking position. Have to trace the grass round on a curved drive position else you end up too close to the grass and watch out for the cat welcoming you home at the same time.... dark image on the infotainment unit against bright front light thru the windscreen. Top view is useful that manoeuvre, projects the four camera image into a top view but also with the rear image for gold measure so you don't hit the garden wall. The ultrasound should kick in before that. Set to 75% up on the brightness it was at 50%. See how it goes.
Last edited: Jul 11, 2022
Show hidden low quality content
You must log in or register to reply here.

New SEAT Ateca 2020 facelift pricing and specification including the new CUPRA Ateca from £39,050

Exhaust Noise - Not sure what to do?