It’s refresh time for the much-loved SEAT Ateca SUV as the 2020 edition has been unveiled with new technology, new design elements and a new XPERIENCE trim line.

“The Ateca has become one of the brands’ more successful vehicles, selling more than 300,000 units since its introduction in 2016. The new SEAT Ateca 2020 is an evolution of the original product and it aims at continuing with its success by consolidating our position in one of the most important market segments,”

Carsten Isensee, SEAT President and Vice-president for Finance and IT.

The SEAT Ateca is designed and developed in Barcelona but produced in Kvasiny (Czech Republic).

Redesigned front and rear bumpers mean the Ateca has grown by 18mm in length. The width and height remain unchanged.

At the front, the 2020 facelift includes while a new front grille, bumper, and narrower full LED headlamps.

The Ateca has also taken the new handwritten style of badging as first seen on the new Leon.

The existing SE (and SE Technology) trims, continue, as do the FR (and FR Sport) models. The Xcellence trim has been replaced by a new Xperience (and Xperience Lux) trim is added which focuses on “all-terrain styling”. Each trim also gets its own new unique wheel design, ranging from 17- to 19-inch.

The XPERIENCE “all-terrain styling” was teased in a concept pre-facelift guise back in 2016.

The ‘Xperience’ trim has black front and rear bumpers with an Aluminium-finish lower valance, body-coloured wheel arch surrounds, and side mouldings in an Aluminium finish.

There are now 10 colours to choose from:

There are new door designs and materials, along with stitching across the panels. There is also a newly-designed and upholstered steering wheel.

Ateca now also benefits from an all-weather heated windscreen, coated in an invisible ‘Climacoat’ layer (Xperience trims only). The technology allows the windscreen to be defrosted almost immediately while minimising the strain on the system. No horrible visible lines like you might have seen on older Ford models.

The driver’s seat is electric with eight-way adjustment and memory function, including the exterior mirrors).

The seats are finished in either cloth (comfort seat), Microsuede or Leather (sports seat).

As we have seen with the new technology launched with the new 2020 Leon much of this is now coming to the 2020 Ateca.

There is a new voice recognition system allowing the driver or passenger to interact with the infotainment system using natural commands, making corrections and referencing previous commands.

It is also possible to download and integrate other services, which will connect with your account and means you will always stay in touch with your smart appliances. To wake-up the system, say “Hola Hola” and it will be ready to go.

As expected, the Ateca includes the Full Link system, supporting either wireless Apple CarPlay (based on Bluetooth or WLAN) or Android Auto using a cable.

The Ateca now includes four illuminated Type C USB connectors, dropping the USB type A from the pre-facelift models. Two are located in the front lower centre console and two are available for the rear passengers

A 12-volt outlet is also within the centre console under the armrest.

The Ateca has wireless phone charging as standard on all models below the lower centre console.

The SUV includes an embedded SIM (eSIM) allowing occupants access to the latest infotainment apps, as well as new digital products and services SEAT look to introduce later down the line.

The eSIM includes support for automatic emergency calling. If a “eCall” is triggered, data is sent to the emergency services, including GPS position, engine type, and the number of passengers which the car will have detected through the pressure on the seats.

This connectivity is being made available across the entire range and supports the “SEAT Connect app”.

From the app, users can remotely access driving data of previous journeys and remaining range, parking position, lock and unlock the doors, set up speed alerts so you can be warned if someone using your vehicles is driving too fast, be alerted if your vehicle has been stolen, or activate the horn and turn signals to find the car more easily in a crowded car park.

Pre-Crash Assist prepares the vehicle and occupants should the worst happen and there’s a potential collision. The onboard systems work together; front seatbelts are pre-tensioned, windows and sunroofs are closed and warning lights are activated.

Predictive Adaptive Cruise Control (ACC) uses feeds from GPS data delivered from the navigation system and input from the front-mounted camera and Traffic Sign Recognition, allowing it to proactively amend the cruise speed depending on the road layout ahead – bends, roundabouts, junctions, changes in speed limits and built-up areas. This reduces the requirement for driver input and mitigates against sudden speed changes and manoeuvres.

The 2020 Ateca gets Side and Exit Assist (Xperience trims only) – designed to make manoeuvring from parking spaces easier. When exiting a parking space, the vehicle will give an audible and visual warning if oncoming traffic, cyclist or pedestrians are detected. If the driver does not take appropriate action or the object gets closer, the vehicle will brake automatically.

The SEAT Ateca will also feature Side Assist which can detect vehicles up to 70 metres in adjoining lanes, with a visual alert via the LED within the side mirror.

There are four selectable driver profiles – Eco, Normal, Sport and Individual (on front-wheel variants), and an additional two modes – Offroad and Snow – for 4Drive versions.

We hope to have a review of the new car in the not too distant future. What do you think? Let us know in the comments below.

Not a fan of this writing font and that simple 4 thrown in there. 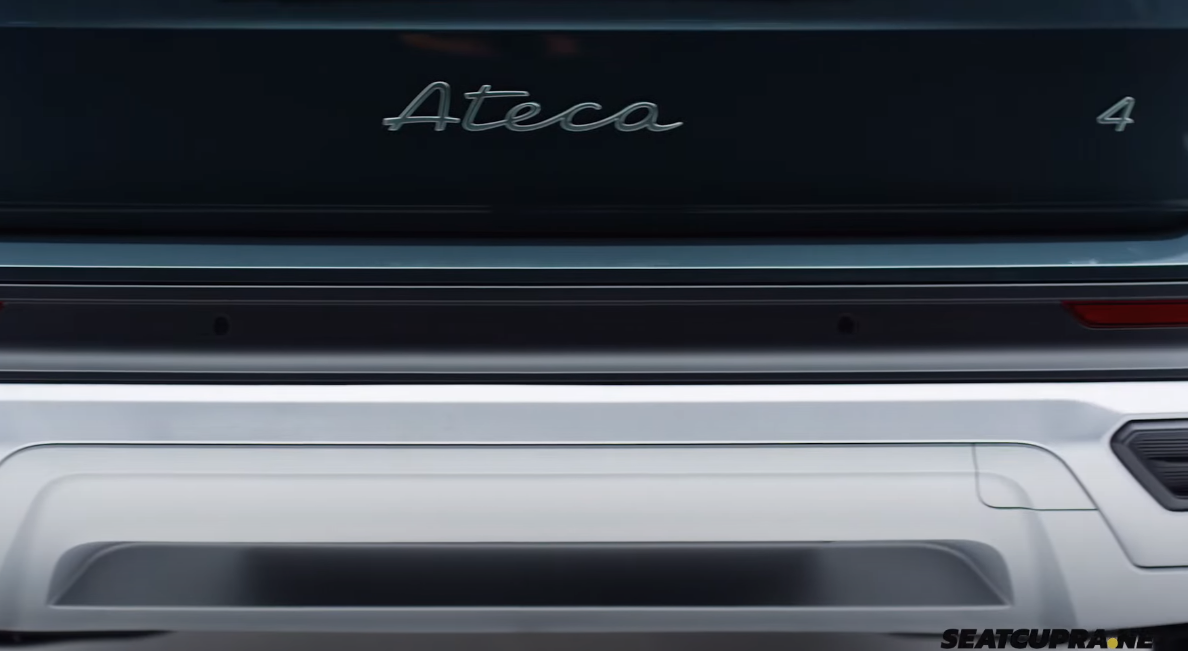 Mihai A. said:
Not a fan of this writing font and that simple 4 thrown in there.

Same as the new Leon. Expect it on all new SEATs going forward.

First picture of the FR trim from the Seat UK website. It looks stunning!

iScoTT29 said:
First picture of the FR trim from the Seat UK website. It looks stunning!
Click to expand...

Have you got the direct link for that please?

No worries, I've found it and added it to the article.
Reactions: iScoTT29 and Tell

The rear isn't a lot different and I like the front end.
Reactions: Syphon

I see Autogefuhl has one of their forensic gold standard reviews, a 27 minute review of the facelift Ateca calling it the 2021... Think that's in keeping with the model naming convention of next model being the year after release. 2017 being the 2016 launch model etc . Good at pointing out the changes between the old and the new. Front assist no longer under the badge but dropped further down on the bumper. 230 / 240 volt in the boot plus 12 volt ~ not sure whether that is on all models. The usb c we know about, front and back. Bit more about the "heated" front windscreen, safety features and the infotainment menu-ing. Improved safety features. Tactile build quality of the materiel. The range etc.

The SEAT Ateca has been redesigned to be more robust than ever. Discover the new exterior and interior design, not to mention it’s advanced technology here.

Note that says on the bottom "Please note some images may not be to UK specification". The same images as the German Seat site.

The next step for anyone interested in getting one will be what's in the UK spec and prices. Where the fun begins of what is in, what is out of each model.

& we will be here to discuss.
Reactions: Syphon

A peaky boo can be made of the new Leon infotainment controls to give a flavour of what might becoming to the Ateca 2020, thanks SeatCupra.net .


Will interesting to know whether Seat connect is free, Mapcare etc and so forth. Noticed not a lot of success with voice commands, don't bother myself on the high. Alexa via the Seat app gave me random stuff... if a lone driver I can see Alexa might entertain you as company or annoy. Will be interesting to see how good Seat apps are... there were none on that model being tested. The app development had traditionally been in-house in Spain.

Where are the buttons .

(& will have to watch this one with Poinspector in case this is deemed a new model with a new ID or whether it passes off as the same as VW and Skoda connect units, has to be tested out by someone with the car, Seat Spanish board use their public domain files produced by Poinspector so there will be an early warning and moans on their site like there was with the standard WiFi unit till that was fixed... reckon someone examined the firmware to find the units ID code then that appeared in commercial files and migrated)
Last edited: Jul 26, 2020
Reactions: Syphon

Hi guys, exciting times as I think we are getting ever closer to the release of the new ateca. Here is a link which has a download button for the new ateca brochure. https://www.seat.com/carworlds/new-ateca/overview.html
Reactions: Billyray911 and Tell

I see traffic sign recognition is back in again as an option although can be enabled ($) by VCDS if Lane Assist is listed. Reckon Navigation Plus is out... there is + and Plus... + isn't navigation Plus. The sub woofer has come back but this time with the out board amp so it appears as an option. So some of the treats are being put back in to the product range by Seat UK. If you want the icing on the cake reckon that's in the Ateca Cupra which probably has the thick marzipan with the Navigation Plus and plenty of cherries . That's in the box marked luxury.

Brings back those exciting memories of the launch in 2016.

The next check is to tally the brochure with the price list and the configurator.

($) but not on Seat 2020 models as VAG have tightened up access to VCDS that's a watch the space one (SFD implementation). Editted it into the top of the Obdeleven resource. Situation may change. Probably work on the basis that any 2020 new models are as is, at the present. Prior models fine where VCDS tools can be used to make mods.
Last edited: Sep 12, 2020
Reactions: iScoTT29

New SEAT Ateca 2020 facelift pricing and specification including the new CUPRA Ateca from £39,050