You are using an out of date browser. It may not display this or other websites correctly.
You should upgrade or use an alternative browser.
Overview Discussion
This mod should work across all recent Seat / VW and Skoda vehicles to 2019 with Lane Assist if it was not delivered as part of an option. Vag group revised programming new 2020 models, check programming documentation of tool supplier for current situation on SFD protectiin.

Recently (circa 2017 on) Traffic Sign Recognition (TSR) has not been enabled on VAG vehicles, this may have been due to litigation if the system incorrectly read a road sign.


The system uses image recognition from the high definition camera which is part of lane assist. The built in navigation system reads the default road speed recorded on the digital map that is displayed on the map normally (Infotainment screen and dash display including VC). With TSR activated changes in indicated road speeds (road works, variable speed limits with camera etc) are read as part of dynamic sign recognition this takes precedence over the digitised maps (if you set it up that way) a warning can be set so that a beep is heard when you exceed a user defined set level. The video above shows how it works on wet roads where speed limits vary and the wipers are used to define that it's raining. It is also set up to detect the autobahn unlimited road sign that you won't see in the UK . Does work on those well when an autobahn is taken off as unlimited due to road works and is lifted again via the unlimited speed sign.

Used with a speed camera database it gives extra security that you won't speed in areas where the speed limit is dropped on a temporary basis or where the underlining inbuilt map is not up-to-date in aspects of the road speed. The option could be purchased with Atecas built in the early years. The option was withdrawn across the VAG group so is currently no longer available but can be enabled with VCDS coding on those vehicles fitted with lane assist (those that steer themselves between lines).

The mod appears across VAG forums, taking the Spanish Ateca site which we thank for the Obdeleven post:

Before proceeding, it is highly recommended to make backups of the modules to be touched, which are: A5, 5F and 17

We access the A5 module and go to Coding , Bytes mode . (Front Sensor Driver Assist)

We accept the change and then access the 5F module , adaptation.

We enter the Adaptation option Car_Function_Adaptations_Gen2 and activate the following parameters :

We accept the change and enter the option Car_Function_List_BAP_Gen2 Adaptation , where we activate the following parameter:
traffic_sign_recognition_0x21

Now we look for the option traffic_sign_recognition_0x21_msg_bus and we give it the Databus Infotainment value (the text may vary depending on the language, but it is what it says is the Infotainment bus)

We accept the change and, finally, we access the module 17 (dash board)

Inside Coding, Bytes mode, in Byte 5 we activate bit 2.

As soon as we confirm the change, we will see that the compass in the FIS has moved to the lower left zone, leaving the upper central zone free in the FIS.
I recommend restarting the Infotainment (press +10 seconds the power button) so that the configuration option under Car-> Assistance to the driver is refreshed.

The VCDS coding is shown in the link from our Skoda friends operating on the A5 camera (same component as the Ateca).

I have starting this LOCKED thread to include the tried and tested VCDS adaptations for the Superb MKIII. If you discover anything and have tested it, please either start a NEW thread in the Superb III section or add them to the VCDS options on Superb III thread, please include a full description...
www.briskoda.net

See discussion thread. Works on both the standard Ateca with lane assist and the Cupra Ateca with cars with FIS or VC same parameters as said should work across VAG cars which use the A5 camera for Lane Assist.

I find it works reliably well in my own car. In France it seems to have the ability to sometimes read lorry max speed limits as the road speed (their signage on the back of lorries may be), never happens in the UK thou and generally reliably warns you with a beep whenever you are above the defined speed limit as digitised with the map or read by the image recognition system. It appears in some instances it needs to pass two temporary road work signs before it takes the speed but other than that it's fine.

Drivers that use Automatic Cruise Control (ACC) can be affected by the digitised road speed being incorrect, a complaint that you sometimes read, TSR can overwrite this. An incorrect traffic sign read may influence ACC. This may be why TSR is not so widely implemented. If this is an issue you just need to toggle TSR off or not use ACC. One of the two. If you do not use ACC then TSR merely warns when the speed parameters of the road are exceeded from either the digitised road speed or signage read. It does not effect the behaviour of the vehicle, with ACC it can work in a positive way when signs are read correctly, but the odd misreading can cause the vehicle to change speed.

Pages from the user manual attached which detail how to use it once enabled. See DISCUSSION tab for further details. 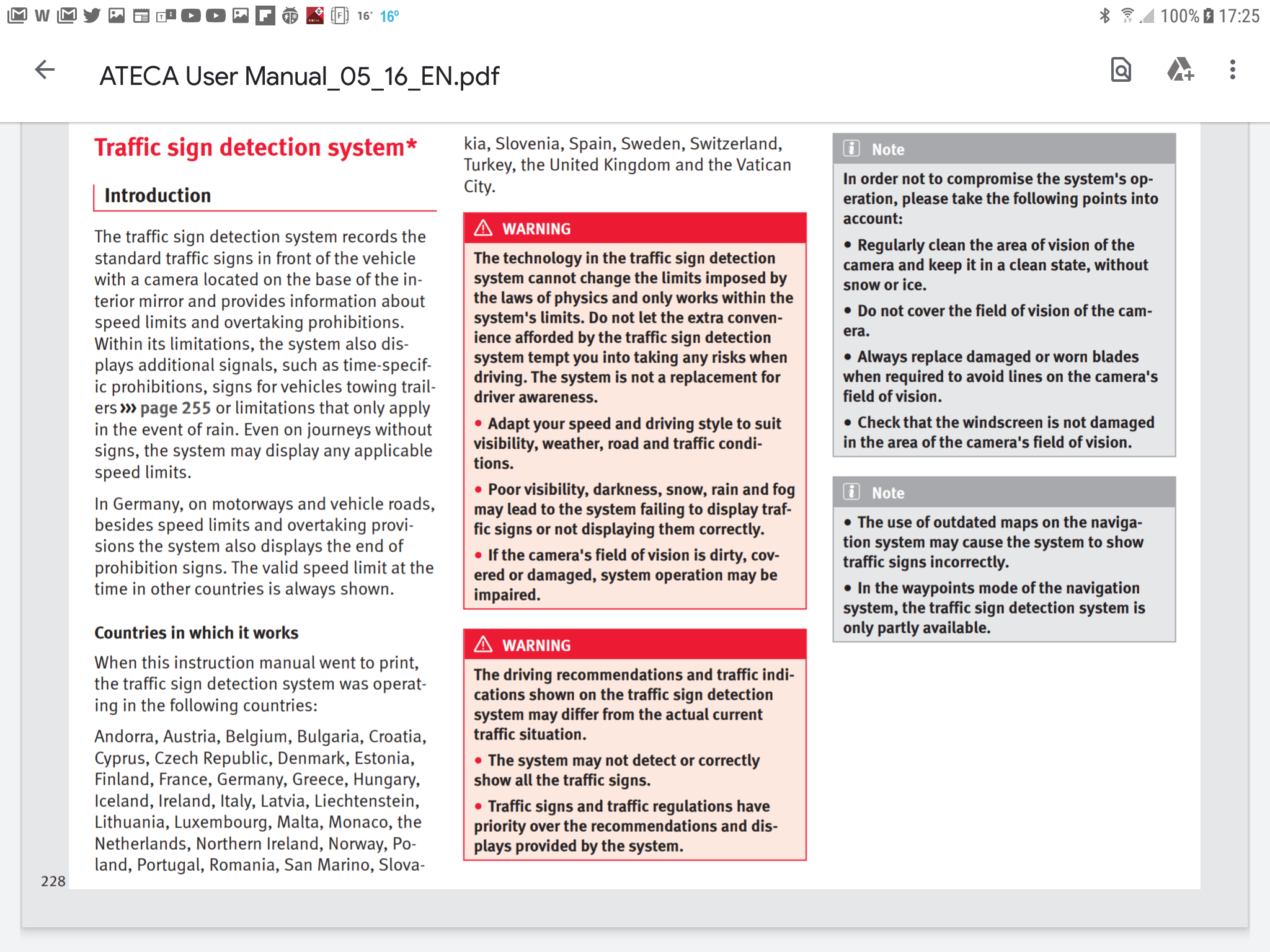 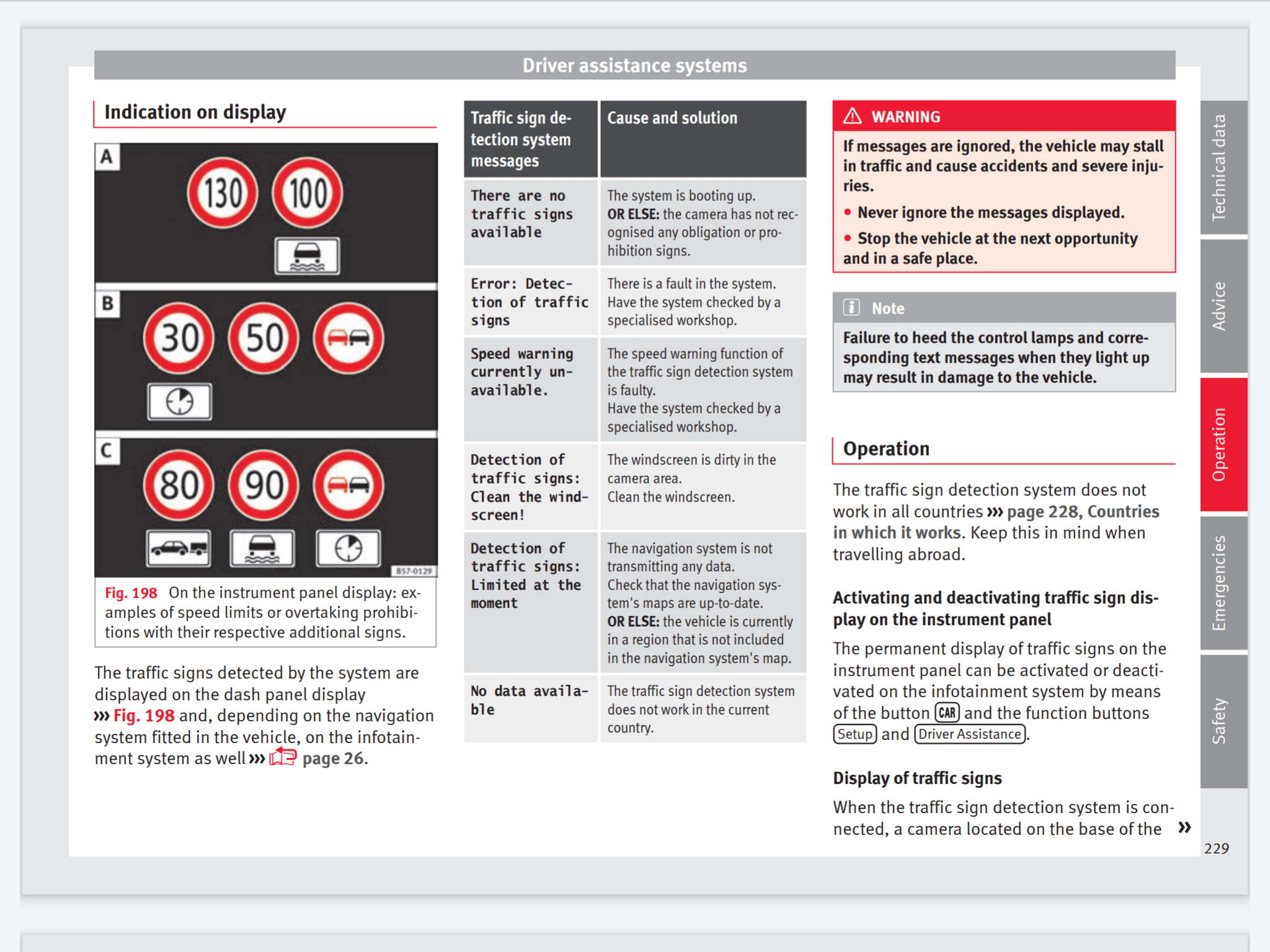 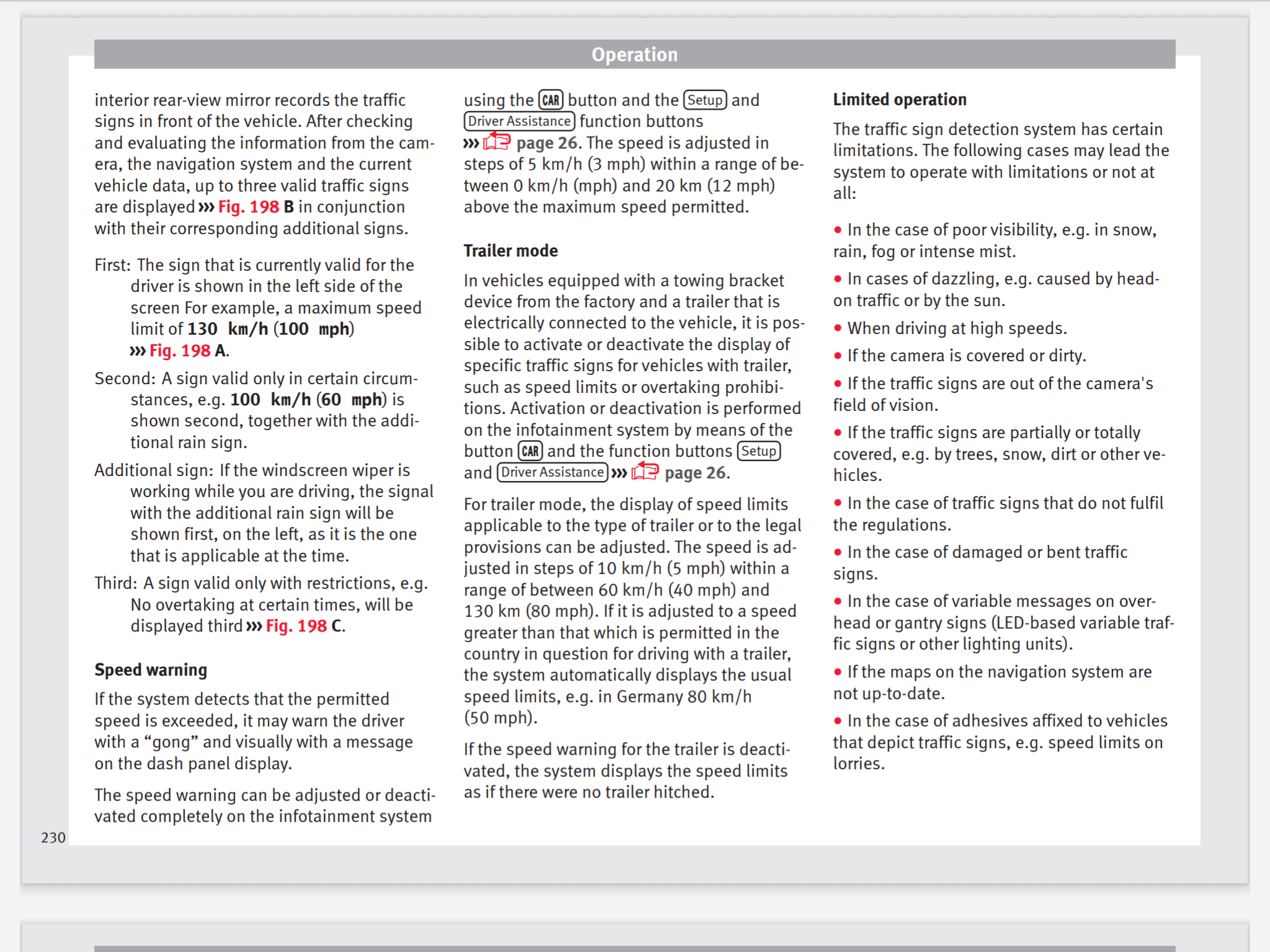