EGR Cooler delete....talk to me.

Hi guys. I've got a fr tdi 130bhp Blt. I'm pretty sure the egr cooler is leaking as the coolant is going. It's got 103k on the clock. Been searching on here for delete pipes etc but got lost with it all. Egr, egr cooler detete, remapping ecu to get rid of check engine light.
I see dark side do a delete pipe for the cooler. Could I use that with out the egr being deleted too or does the egr need the egr cooler?!
Thanks guys
Paul

You could probably just blank off the egr at the valve and the manifold, if you didn't want to buy an egr delete. Either way the engine management light will come on and need mapping out.

You can remove the cooler without the dark side delete pipe it's really quite simple, just need to remove one of the hoses and attach the remaining hose in it's place. I took a couple of photos when I did it a few weeks ago will upload them later.

Cheers Matt. I don't mind buying that delete pipe and egr delete kit from dark side. They do one for about £50 and the pipe is about £35. Just wanted/needed some advice from someone whose been in this scenario before. How much for someone to map it out? Anyone round the midland that could do it? Or would it be done with a normal remap of the ecu when u up the bhp? As u can guess I'm not really that good in this egr area. :-S

The egr delete darkside sell for £50 also deletes the anti shudder valve (ASV). This is butterfly valve like you see for petrol throttle valves that closes to shut off the engine with less shake, it also shuts off the car should have a problem that allows the engine to start running on it's own oil, called diesel runaway (scary stuff if you Google it).

There's only a small chance of that happening and can be reduced further by removing the crankcase vent into the intake and directing this to atmosphere or a catch can.

They do an egr delete specifically for your BLT engine code that retains the ASV but it's more expensive:
http://www.darksidedevelopments.co....v-tdi-pd-ppd-and-cr-egr-delete-race-pipe.html

I had it mapped out when I had my car remapped at CC Tuning in Burton upon Trent, all decent tuners should be able to do it as part of the remap if you ask.

I don't think the cooler delete pipe would be any easier/better than what I did with the hoses.

So if I joined out the two coolant pipes on the egr cooler that would show up whether it's the cooler that is leaking coolant?!
So if I put a blanking plate on the pipe that attaches to the bottom of the egr that would blank it of but throw up a light on the dash?

1. Yes, here are the pictures:

First drain coolant, make sure the expansion cap is removed or it won't drain. In the bottom passenger side there is a drain valve thing.

Then remove the pipe with marked with red above, the other end of this pipe attaches onto the block. The blue pipe is then removed from the cooler and attached where the red pipe was onto the block. Shown below:

From the top it will then look like this: 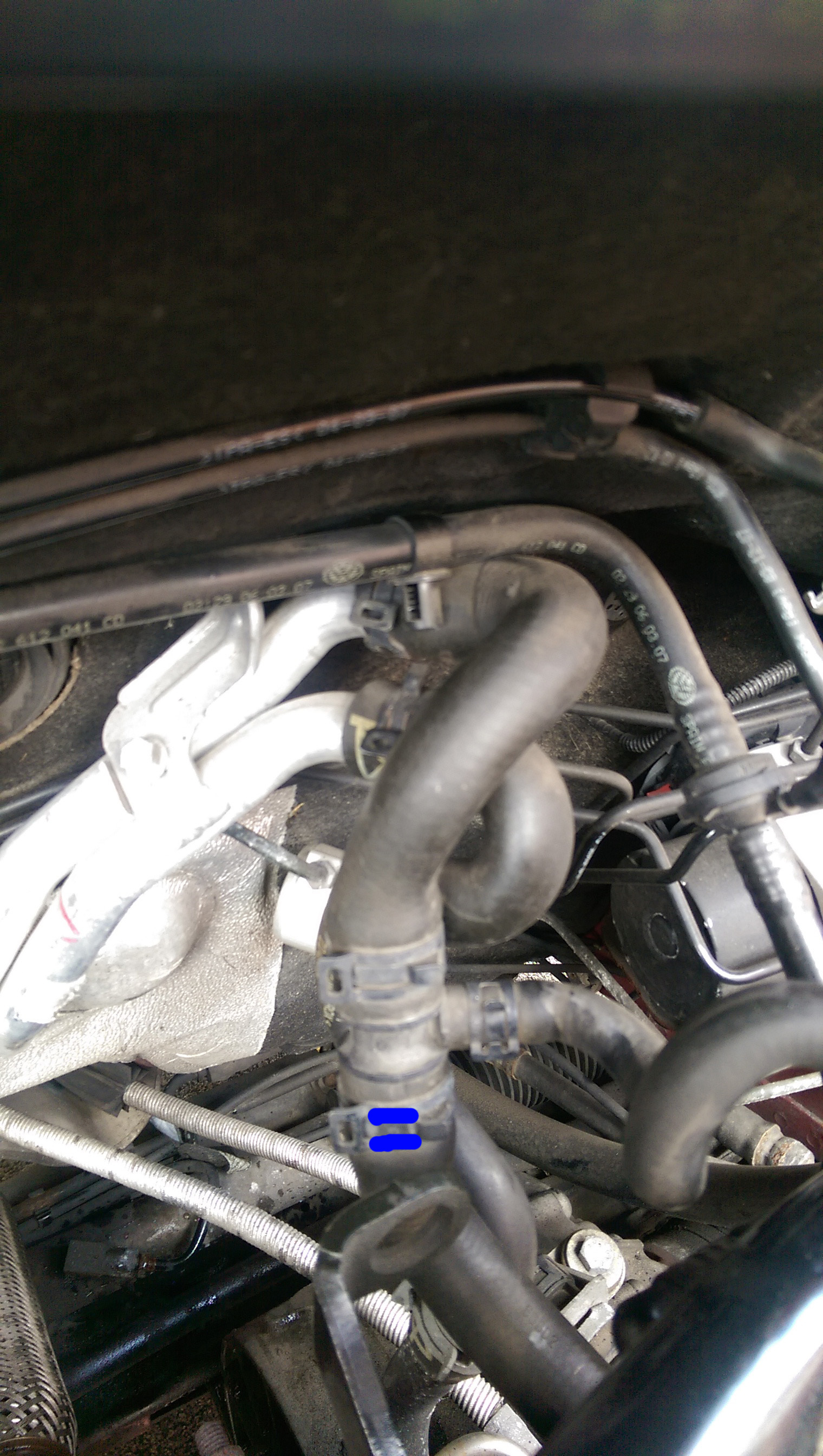 2. If you wanted to test if the cooler was leaking I'd just remove the vacuum connection onto the top of the EGR valve, this is the easiest way to disable it. Will throw up the code/ light though...

If you do replace the EGR with a delete pipe, I wouldn't recommend blanking off on the pipe that connects to the EGR as this is the pipe from the EGR cooler, and I have heard of other people having problems with the gas flow leaking on these pipes. So best to blank off at the manifold before it goes into the cooler.

Matt ur a legend. I'll have a go at doing as u said above.

Disconnecting the pipe that connects to the egr how will that show if the coolant is leaking? I would have thought there would be a constant flow of coolant through the egr cooler at all times powered by the water pump?!

Also how much pressure is in ur coolant tank? I would say there is quite a lot on mine.

Johnsbegood said:
Matt ur a legend. I'll have a go at doing as u said above.

Disconnecting the pipe that connects to the egr how will that show if the coolant is leaking? I would have thought there would be a constant flow of coolant through the egr cooler at all times powered by the water pump?!

Also how much pressure is in ur coolant tank? I would say there is quite a lot on mine.
Click to expand...

That's to easily disable the EGR if you remove the cooler from the coolant loop but leave all the other connections to check if that's the source of your leak. The slightly older ASZ engine code don't have a egr cooler, but I'm not sure whether it would cause a problem on your (BLT code) without disabling the EGR so worth pulling it off and sticking a golf tee of similar in the tube.

There is pressure in there when it's warm yes

Ok got u. So just in case it's best to disconnect the egr valve if I do the cooler too?! When I get a min I'll do that.

Johnsbegood said:
Ok got u. So just in case it's best to disconnect the egr valve if I do the cooler too?! When I get a min I'll do that.
Click to expand...

Yeh to start with I'd just pull the vacuum hose off the egr and block the hose. Then just pull the coolant hoses off the cooler and connect them as per my photos. Should be okay like that temporarily.

Then you can decide what to do with the egr delete and mapping out the light.