Took my car down to my friend at Xclusive customs yesterday to get the front and rear lights tinted. Really happy with how it looks now, didn't want to go too dark on the rears as not a fan of the limo black look on red cars.

Just waiting on the intercooler discharge pipes to arrive and counting down the days until the trip to r tech! 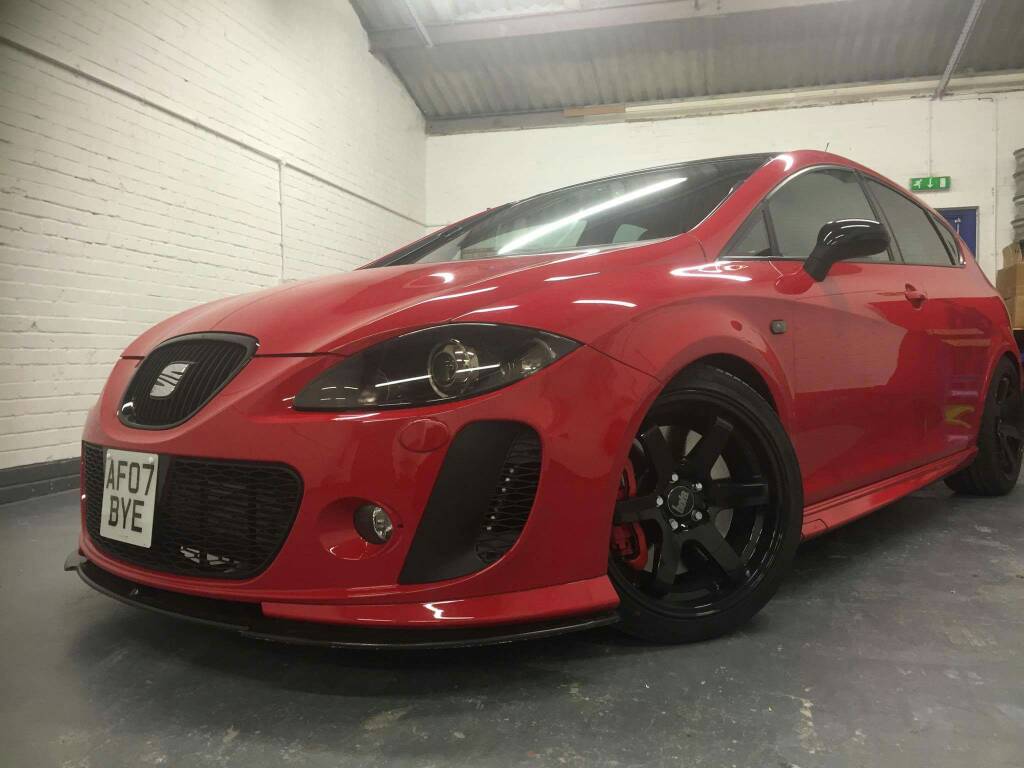 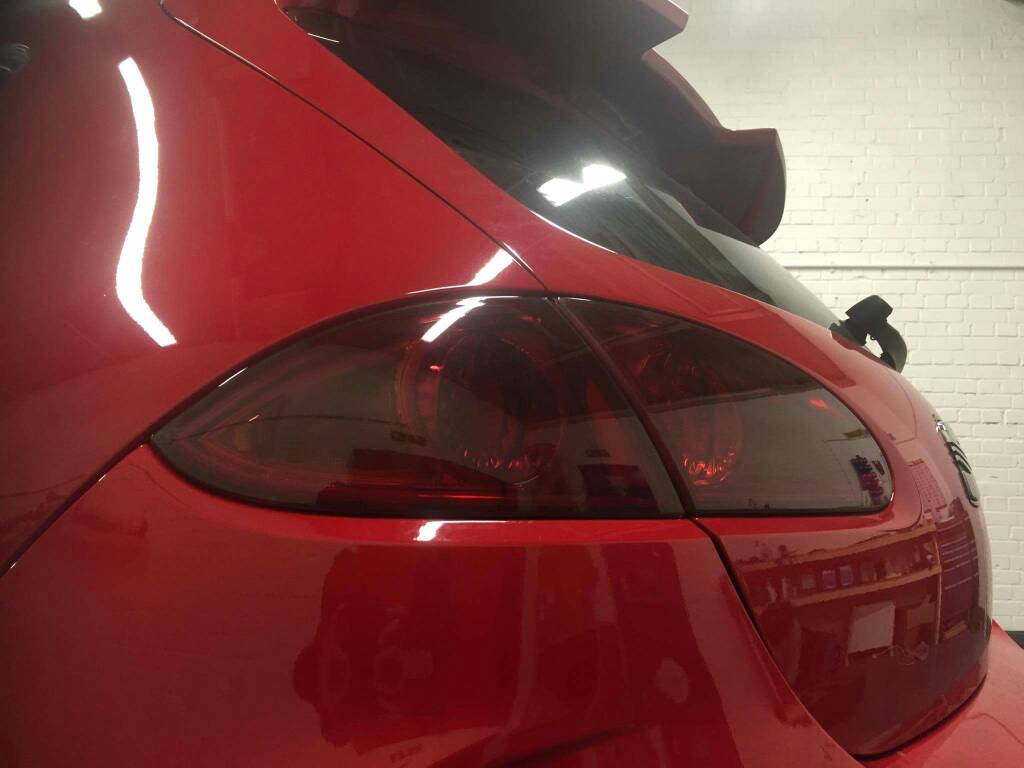 Before and after shot 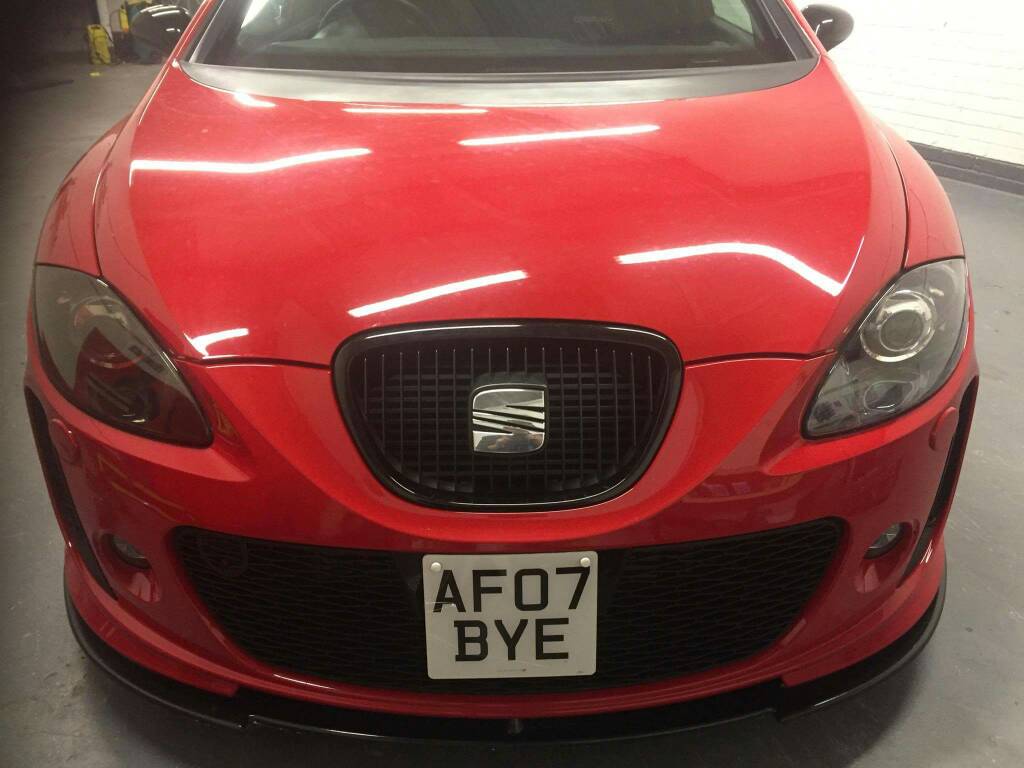 Looking nice How you finding the coilovers after a few weeks running on them. Also at your current height/stance (which looks great) are you having problems with speed bumps etc?

Cheers buddy, coilovers are still handling brilliantly. Adjusting the ride height up slightly as it has settled and now lower than it is in the pictures.

Got some bits to finish off cutting off the strut turrets tomorrow and full service so will adjust the height and put some more pictures up.

Got the upgraded intercooler discharge pipes through today, so took a trip to a mate to get the bayonet connection deleted. Hopefully get it all fitted on the weekend. 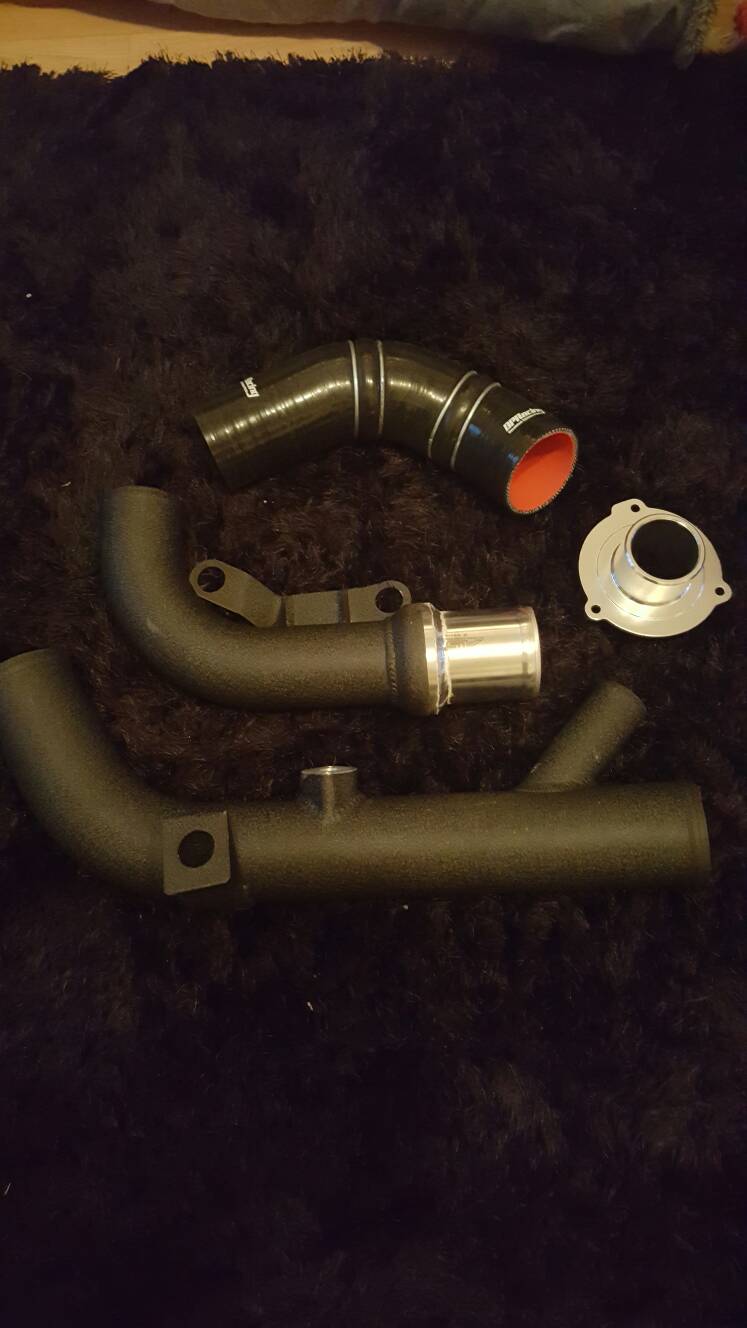 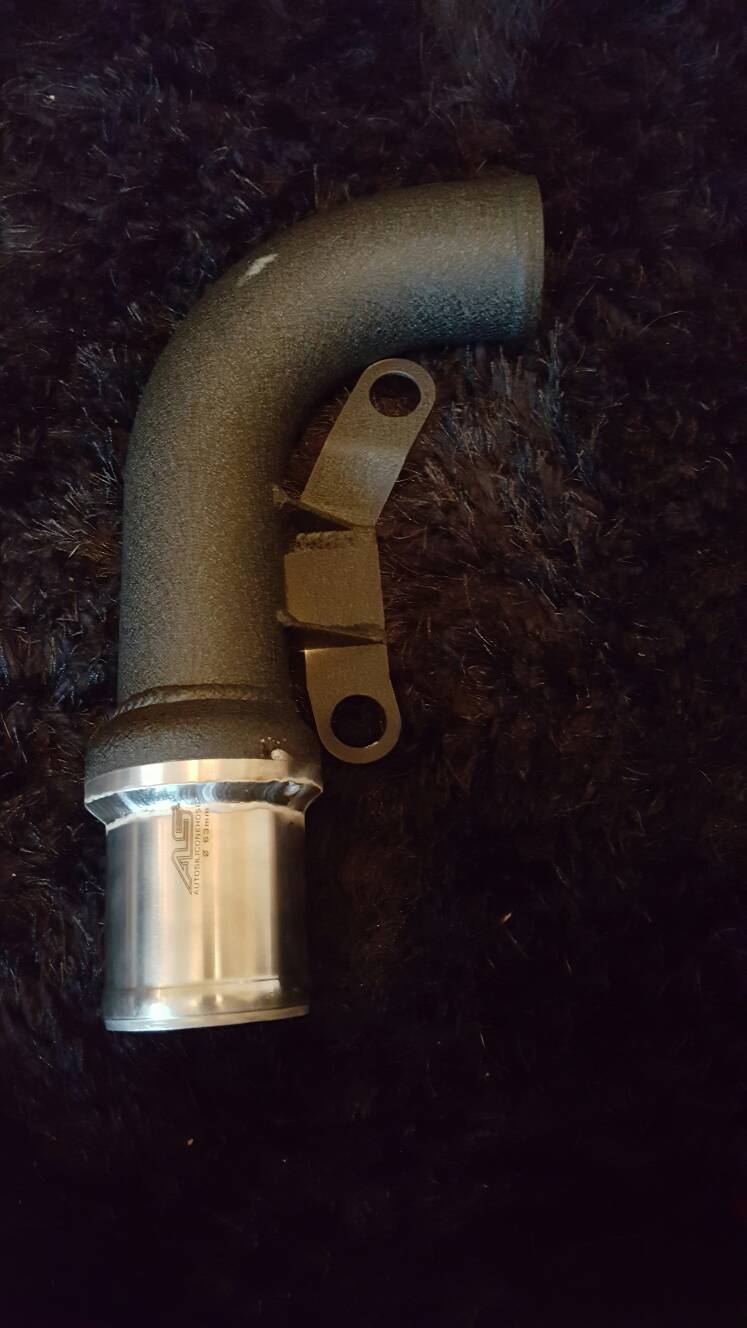 Very nice looking car. Especially like the gloss black boot/ diffuser area youve done (so much so that its now on my list). Whats the % you went for on the front light tinting?

Had a trip up to Rtech on Friday to get the Revo remap off and see what Niki could do with it. First dyno run with the Revo map produced 358bhp and 340lbft which was 20lbft down on previous dyno run (different revo sps settings I think).

Niki then loaded his map onto it and started fine tuning it to get a final figure of 370bhp and 393lbft.

During mapping he noticed there was an issue with the low fuel pressure dropping which he suspected was the plastic pipe on the intank fuel pump. Also the waste gate actuator has gone slightly weak (not worth sorting in his view as gains would be minimal).

The car is an absolute animal to drive now, the main improvement is the part throttle/light load response on the throttle is a lot more direct and not so jerky as felt with the Revo map.

I had him load on the no lift shifting which takes some practice to get right but not likely to use on a daily basis. Also the hardcut limiter was added which gives a nice sound these engines need compared to the stock rev limiter. 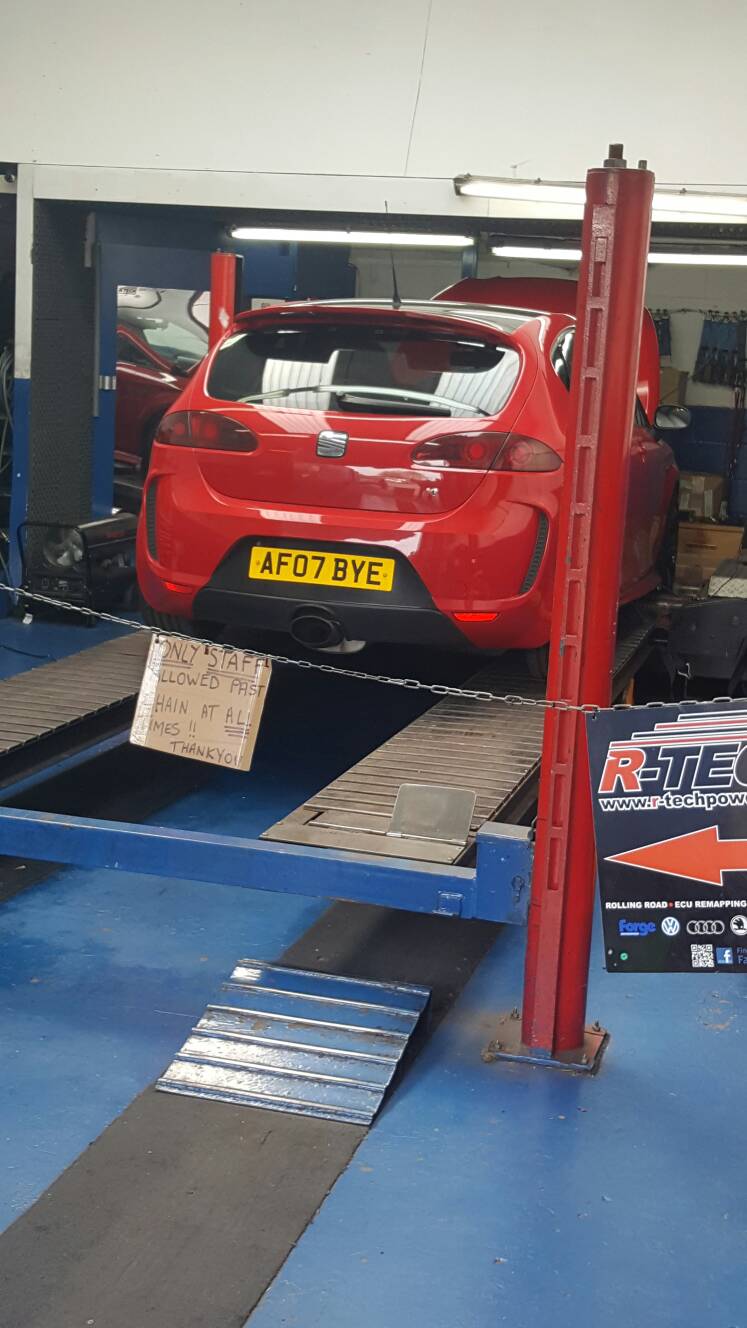 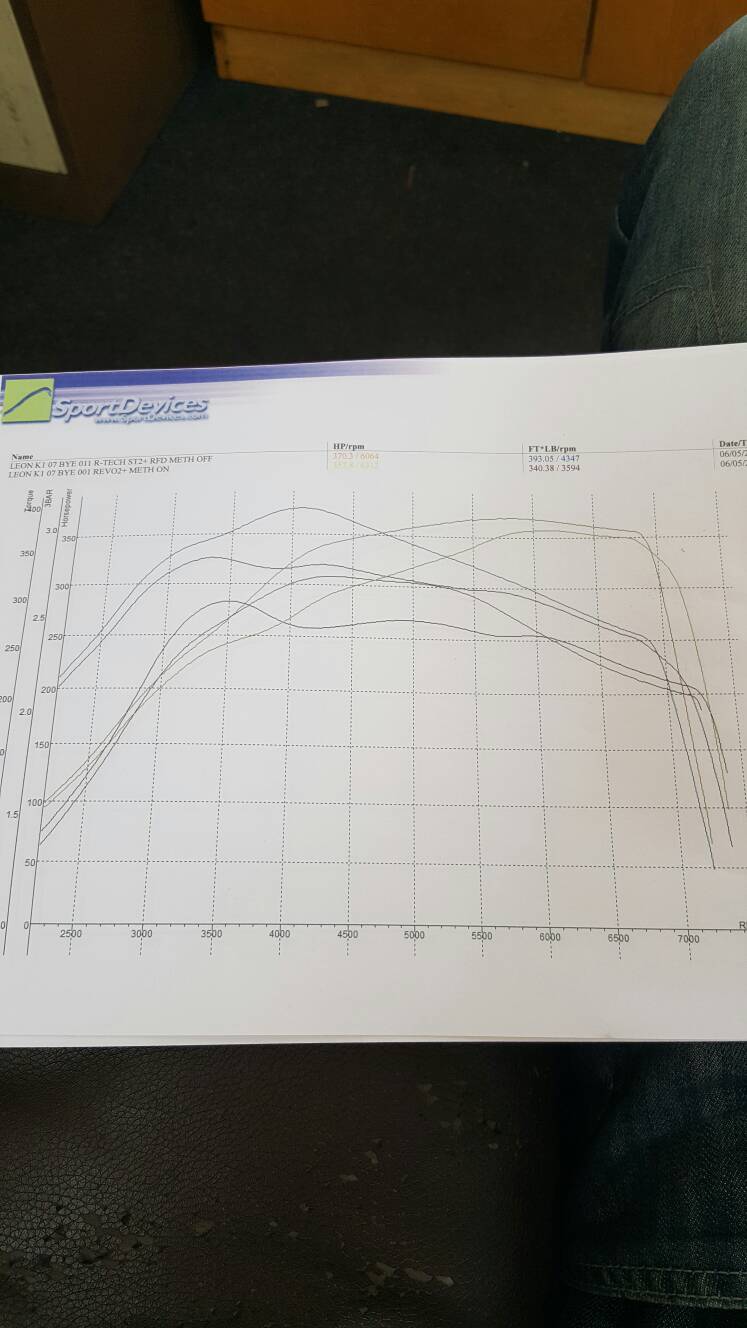 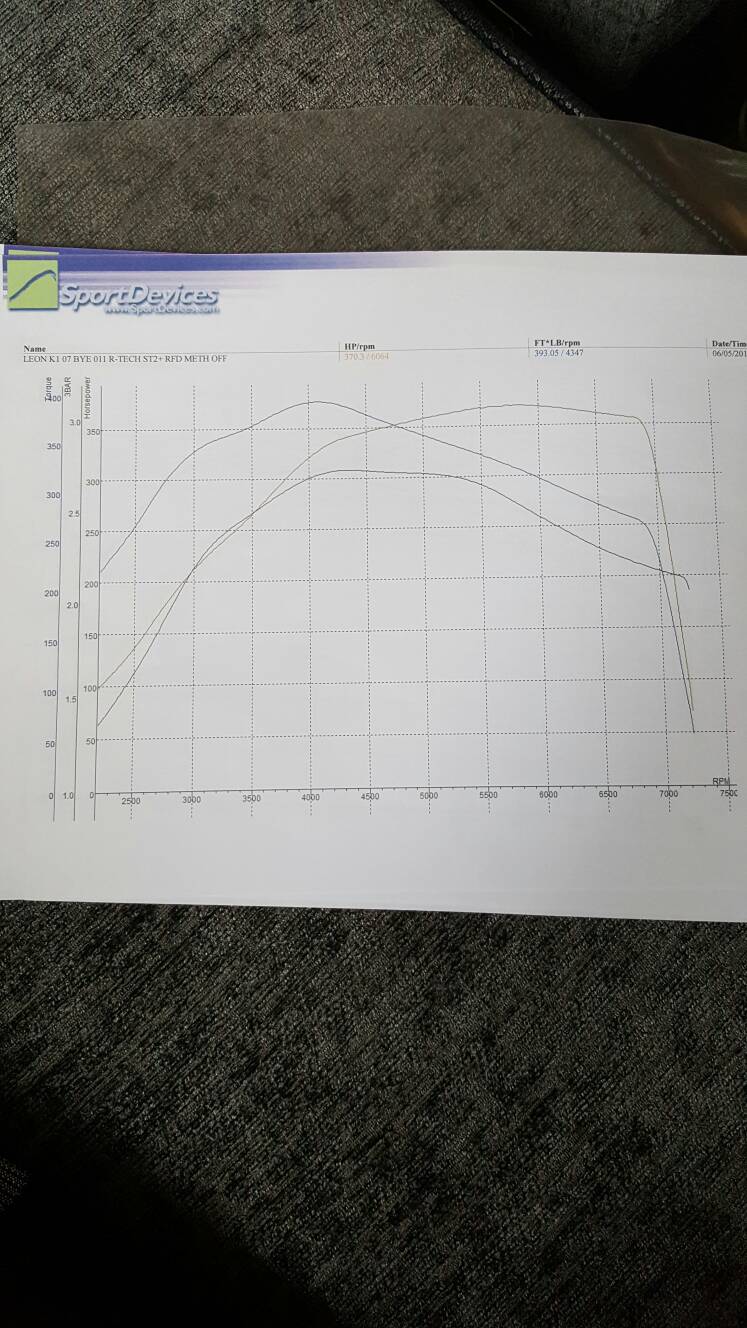 thamim said:
Very nice looking car. Especially like the gloss black boot/ diffuser area youve done (so much so that its now on my list). Whats the % you went for on the front light tinting?
Click to expand...

Cheers buddy, yeah thats one of my favourite bits, changes the look of the rear end. Not sure what % the tints were as I just asked him to do a light smoke on them.

How does the car drive with the SMF? Would you recommend it over DMF and is it noisey?

JoshCupraR said:
How does the car drive with the SMF? Would you recommend it over DMF and is it noisey?
Click to expand...

Drives fine with smf, is a bit noisy on idle but I've got track density engine mounts and solid pillowball top mounts so get some noise coming into cabin. Didn't fancy going dmf as they will fail at some point

Ye I can imagine it will eventually fail and it's not a job I feel like paying for twice. I've ordered a helix clutch with DMF from AKS Tuning and there's a delay with the order so I'm thinking of changing to the SMF package. Did yours take much getting used to and is it much bother when in traffic/town driving?

It's up to you really, I know the dmf makes it nicer to drive in stop start traffic but not sure what the dmf are rated too 400-450lbft seems to ring a bell. Best of speaking to Alex and seeing what he suggests as also depends on plans for future upgrades/power. Takes a bit of getting used to for the first 500 miles or so as it was quite grabby and kept stalling it, but been spot on since. Likely to change mine for a helix smf kit when it's worn out.

When I last spoke to him he said 410lbs/ft so should be okay but there's a possibility I may go TTE or big turbo next year so might go for the SMF. Thanks for the help

Yeah thought it was something around there. Always best to future proof because there's always a hunger for more power! No worries buddy

Is Niki okay with overwriting other companies remaps or does he prefer them to be removed beforehand?

JoshCupraR said:
Is Niki okay with overwriting other companies remaps or does he prefer them to be removed beforehand?
Click to expand...

Sorry didn't see the reply, yeah I had revo remap and he just wrote over it. Best to double check with him before you go depending on the map but I'm pretty sure most if not all aren't an issue

Haven't really done much to the car lately, so ordered some new coloured hoses to brighten the engine bay up a bit.

Also changed the coolant pipes to a set that one of the guys on tfsi tuning found. Whilst I was at it I fitted a new coolant tank as the old one was pretty discoloured. 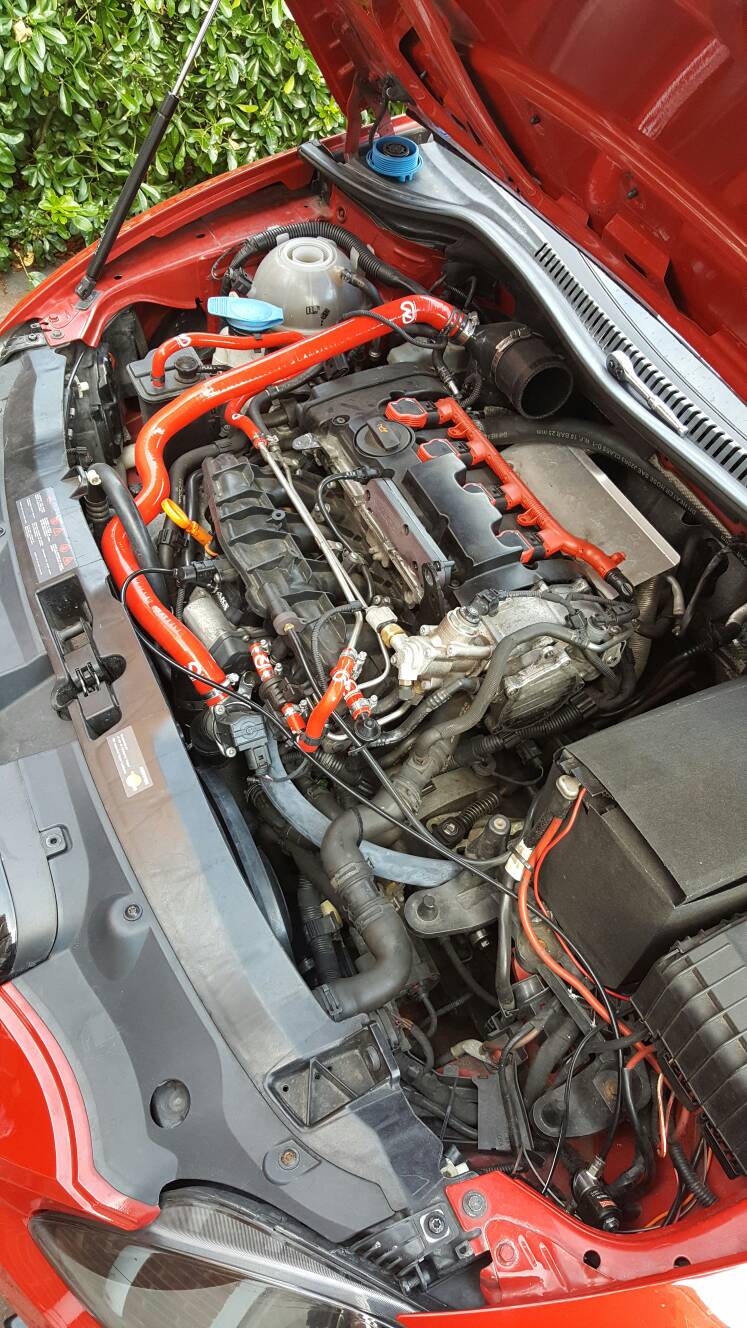 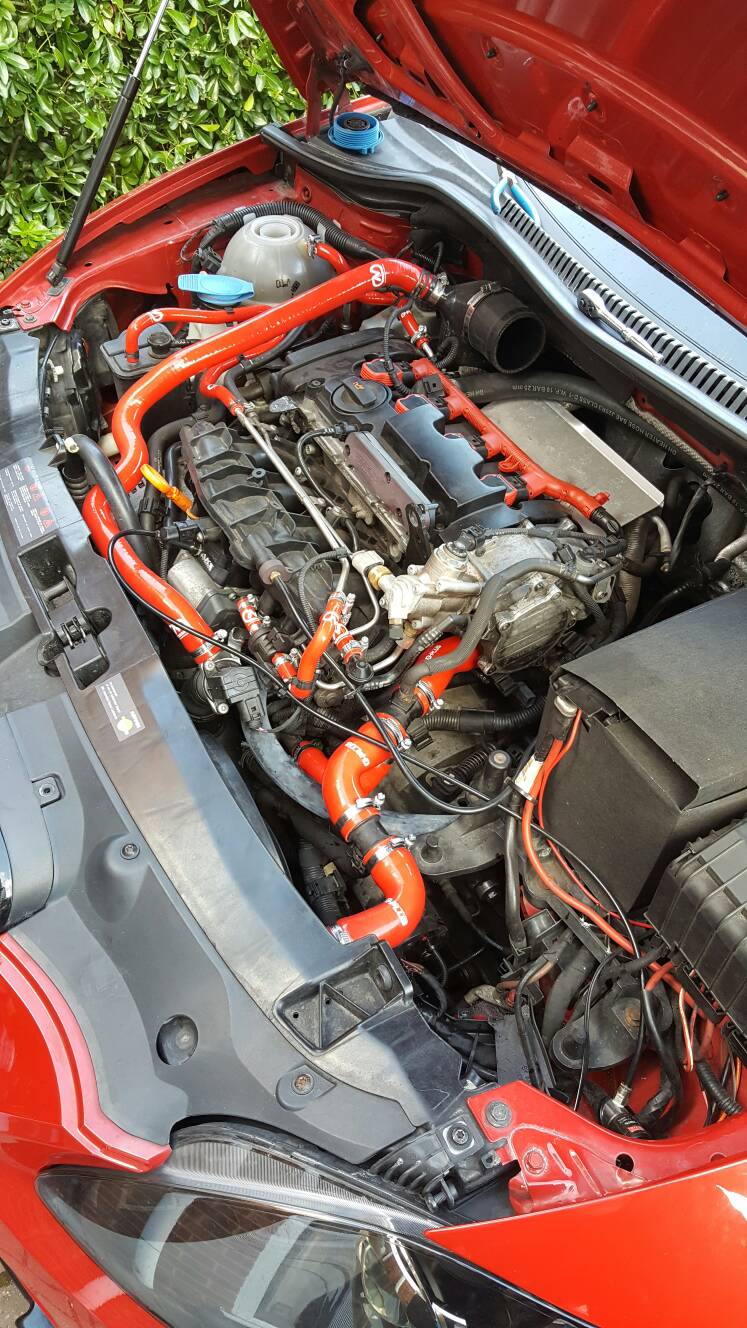 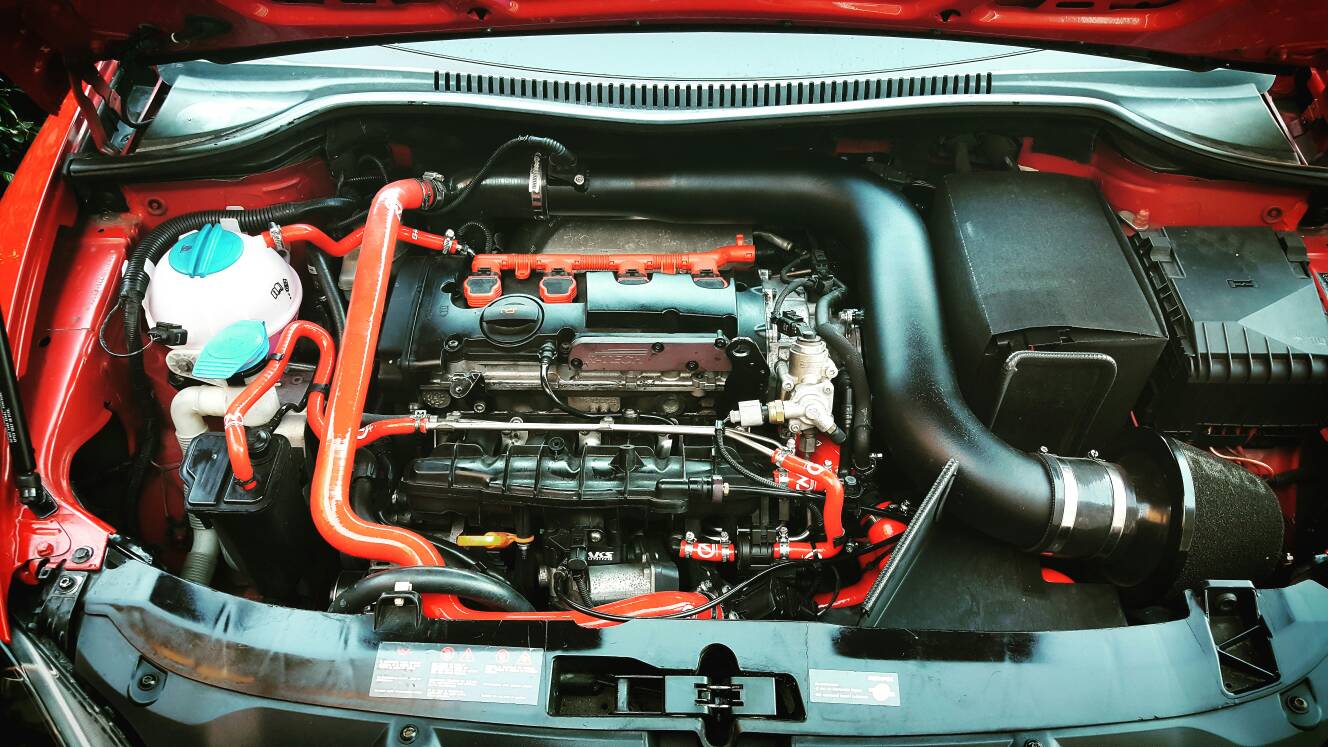 Nice car mate, nothing like a nice & clean engine bay

Map from R-tech looks strong too, got my ibiza booked in with R-tech next month

Not much to update on this lately as have taken a break away from the car whilst getting Xmas bits sorted. Needs some front tyres and a service so looking at getting some semi slicks for the front. Swaying towards Nankang NS-2R or the Yoko ad08r.

Also got another project in the works of fitting a raspberry pi unit in so can play emulated games in the car.

Got a few recent pictures of the car and our line up one night of some decent powered cars we went out for a run with. 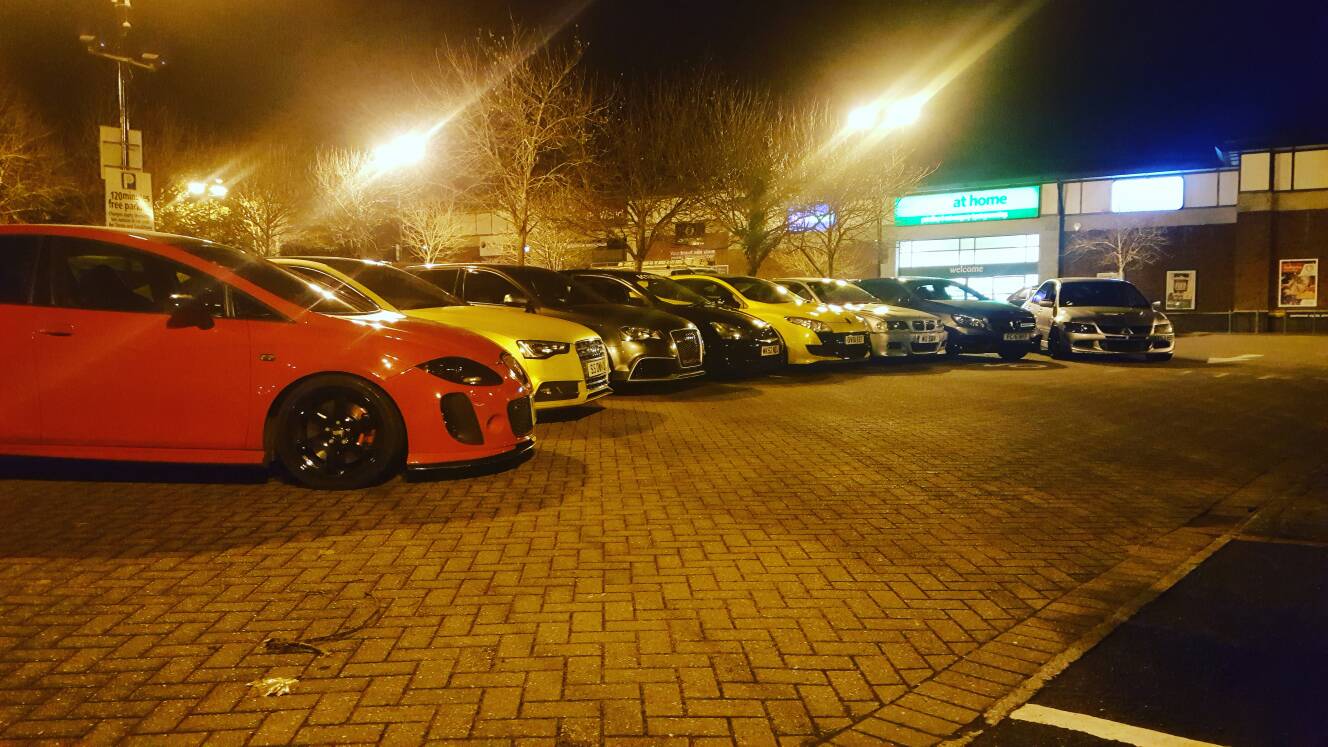 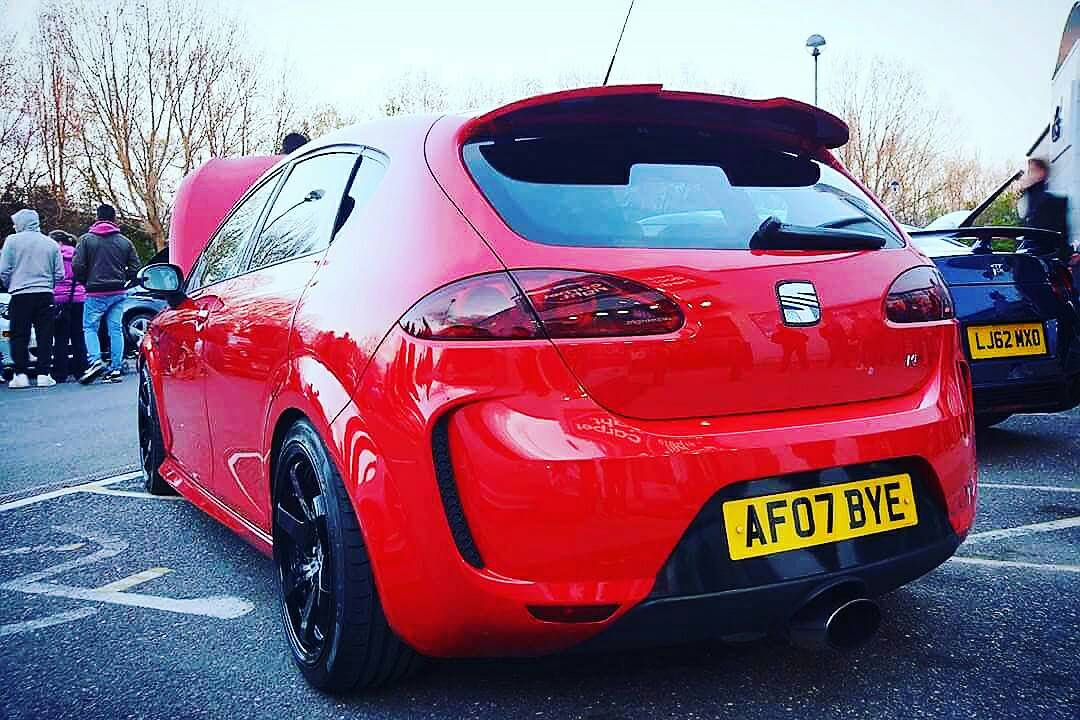 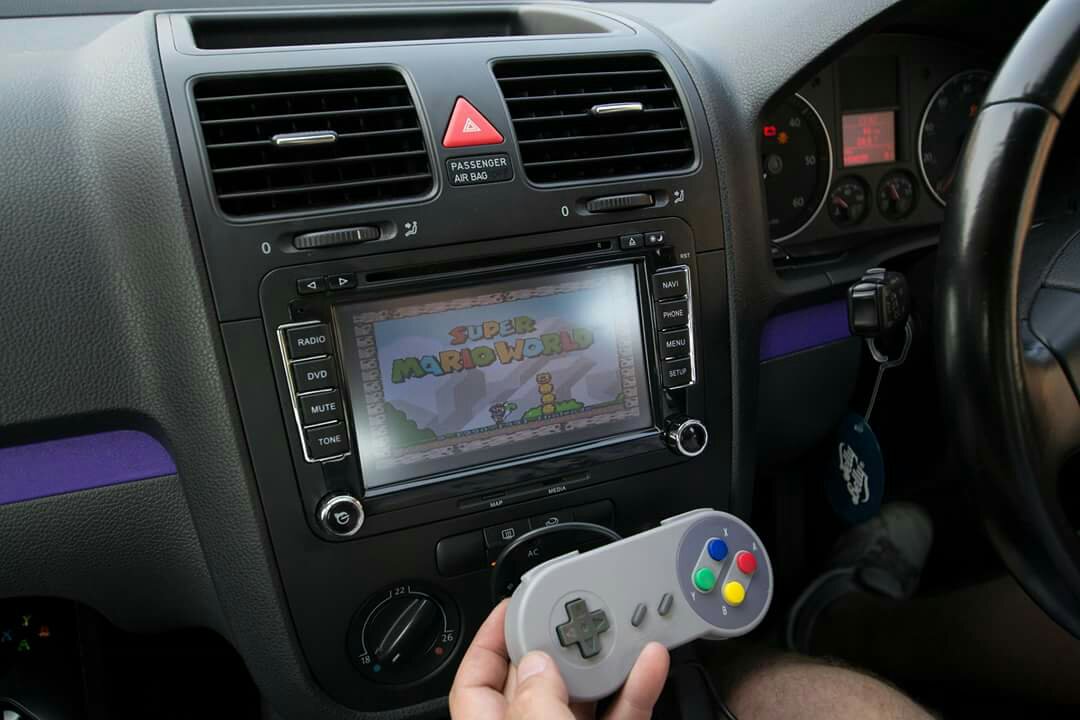