Brake system A guide to replacing the rear pads and discs (272 mm) on a Mk. 3 Leon with independent rear suspensi

You are using an out of date browser. It may not display this or other websites correctly.
You should upgrade or use an alternative browser.
Overview Reviews (2) Discussion
A guide to replacing the rear pads and discs (272 mm) on a Mk. 3 Leon with independent rear suspension:

The only difficult bit about this job is removing the caliper carrier bolts. The factory tightening spec is 66 ft/lbs plus 90 degrees which is very tight indeed. If the fasteners are rusty, or someone's had a crack at them with the wrong tools in the past, you might struggle. It is possible to get a breaker bar on them but only if you have a ratchet with a pivoting head (see pic. 9). I took the easy option and asked a local garage to put the car on a lift and crack them loose for me and snug them back up. A tenner very well spent.

1. Loosen the wheel nuts and jack the car up so you can put axle stands under the sill jacking points to support the car. I used the tubular support member shown in the pic, it was absolutely solid although it is a fair way under the car so you have to be careful with the jack. 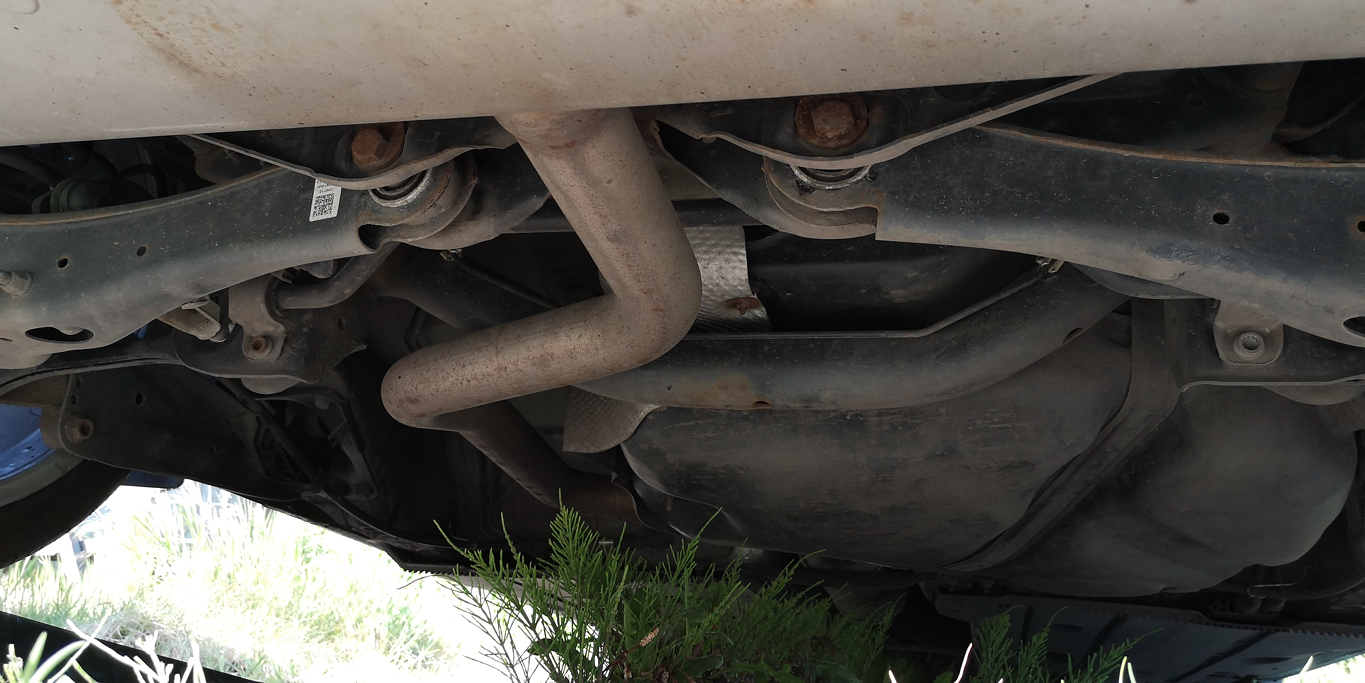 2. Put your axle stands under the sill jacking points and lower the car down. You can now remove the wheel bolts and take the wheels off. To avoid folding the seam over and potentially wrecking your car, use rubber jacking pads under the sills. I used rubber hockey pucks in the pic but I actually have some proper hard rubber pads, they're about 2 inches thick and have a deep groove that the folded sill protrusion sits in but I couldn't find them at the time. 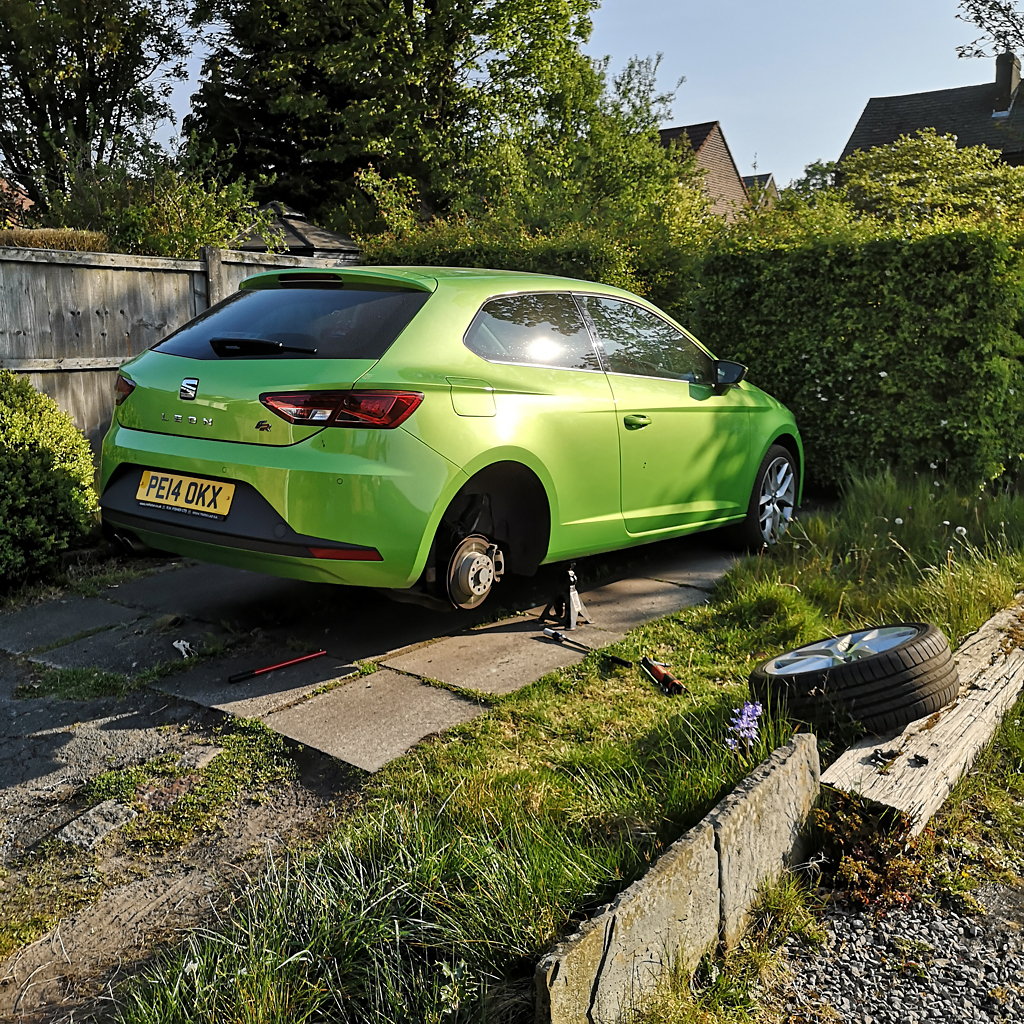 3. You can now remove the caliper itself. Hold each slide pin with a 17mm spanner and remove the small bolt (13mm if I remember correctly). The caliper will probably need levering off the pads at this point and you can then rest it on the control arm. The handbrake cable is pretty stiff and will stop it falling off or going anywhere.

4. These are the caliper carrier bolts. Mine were in pretty decent nick but I've heard horror stories about bodged attempts to remove them. The bolt heads are M14 triple square and it helps to use quite a stubby bit as there isn't a lot of room to play with. As I said above, these are quite easy to access with a breaker bar or pipe over your wrench but you will need a wrench with a pivoting head (see pic 9). 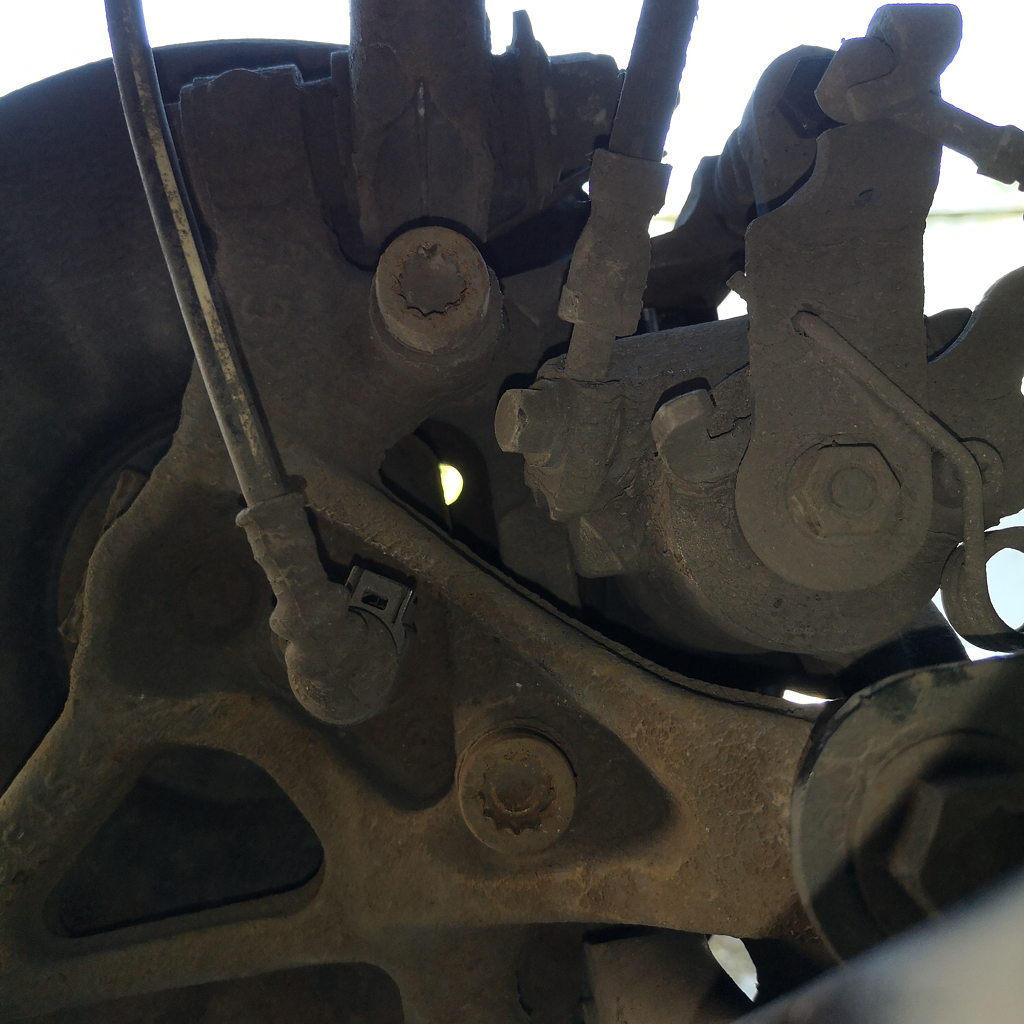 5. With the caliper and bracket off, you now have unfettered access to get on with the job. You will need to remove the disc retaining screw to get the old disc off, assuming it's still there. The screw is a T27 Torx, mine came out pretty easily but I've had to use an impact driver in the past. Don't forget to apply anti-seize to the threads when fitting the new disc. 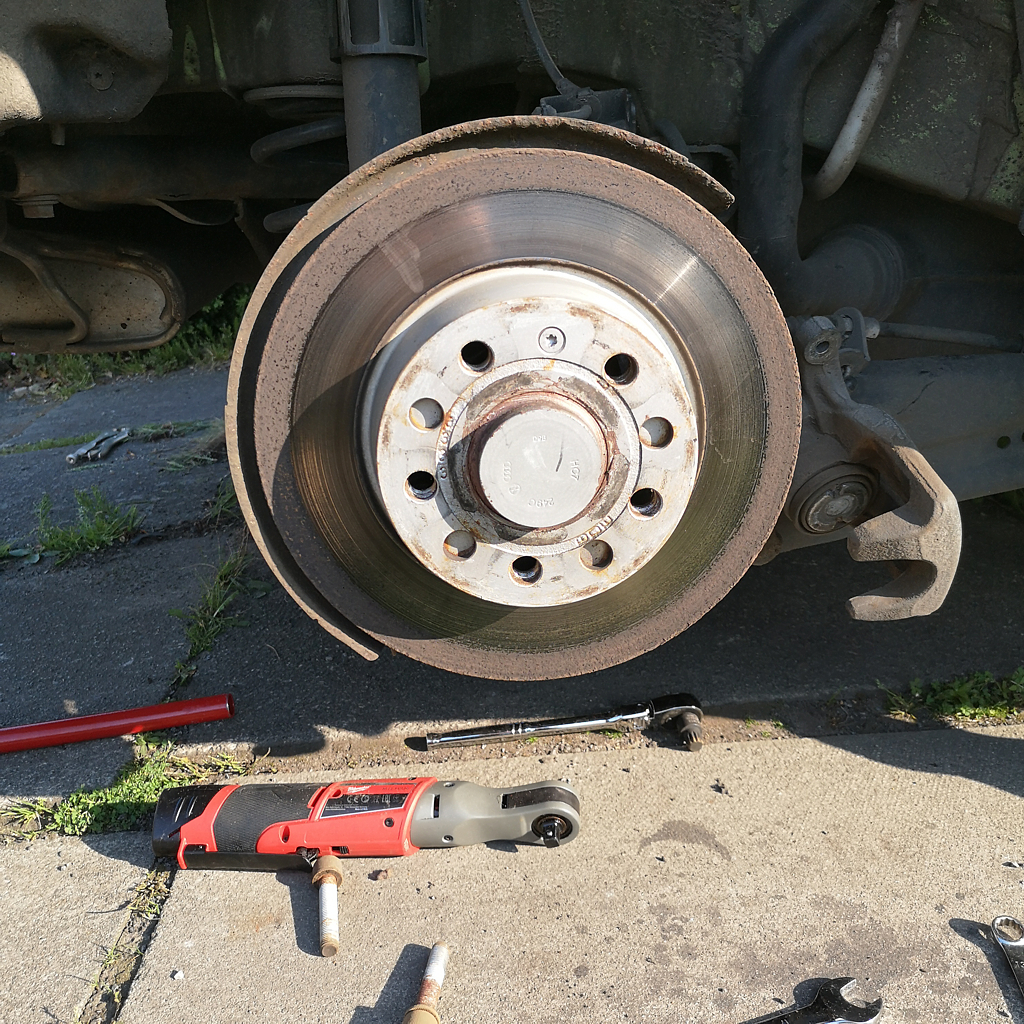 6. With the retaining screw out, remove the disc and put it to one side. Mine was quite well attached and took a few whacks with a rubber mallet to remove. With it off, clean the hub face with some brake cleaner and, if you want, put the thinnest smear of anti-seize on the hub face in the area where the disc's central hole fits onto the hub. This will stop the new disc seizing and being hard to remove in the future. 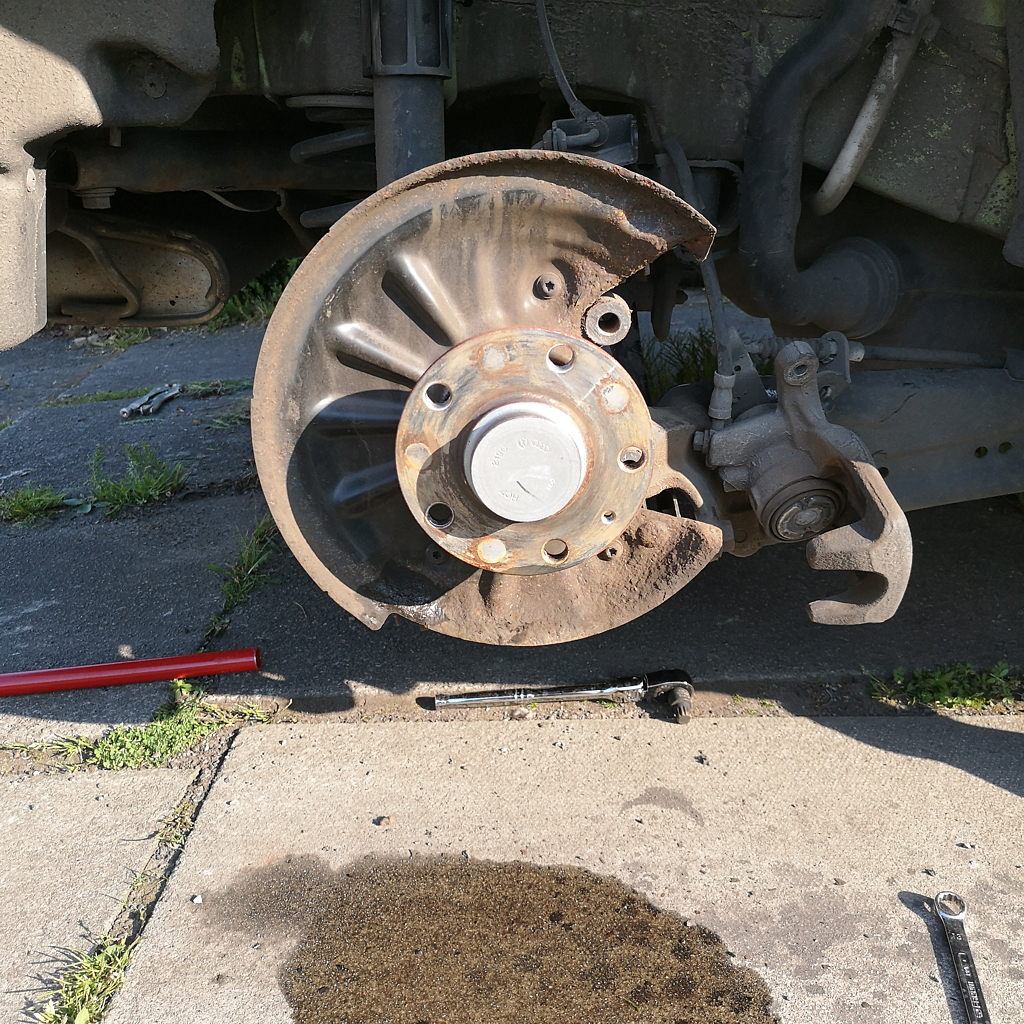 7. You can now fit your shiny new disc to the car. Don't forget to apply anti-seize to the disc retaining screw to prevent it seizing up in the future. 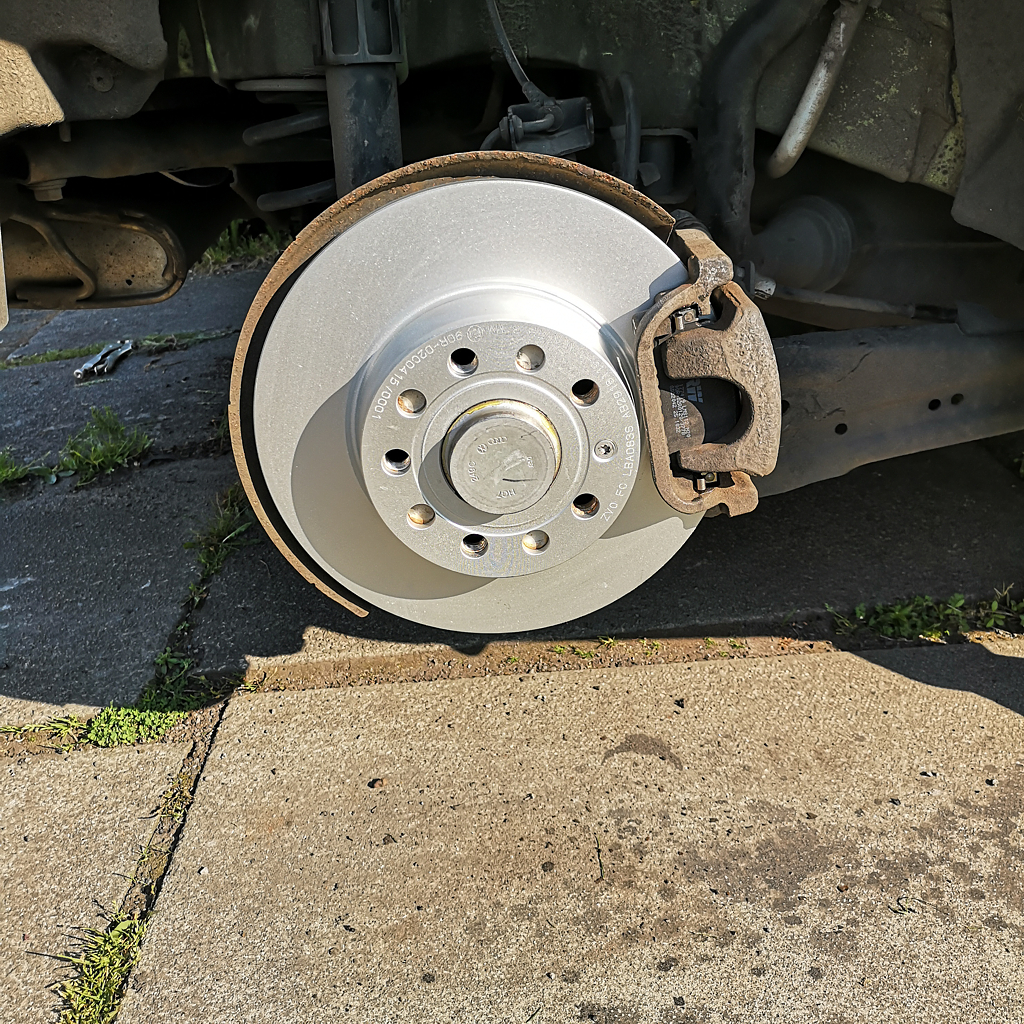 8. Before you re-attach the caliper brackets use an old file to file off any rust and scale in the areas where the ears of the brake pads will sit, just enough so that you can see clean metal again, and then apply a very thin smear of silicon or brake grease over the areas you've just filed clean. This will prevent future rust build up and help to keep the new pads moving freely. Whilst you've got the calipers off, it's always a good idea to check the slide pins are adequately lubed. I pulled mine out and they were fine but the silicon grease had turned very runny so I wiped most of it off and re-applied some new silicon grease.

9. When tightening the caliper bracket bolts you should aim for 'that ain't coming off again!' tight. The factory spec is 66 ft/lbs plus 90 degrees but there's no room to get a torque wrench in there. If you use a wrench with a pivoting head, there is room to use a breaker bar or extension tube (I bought a two and a half foot length of 19mm ID / 23mm OD seamless steel tube on ebay for around £15 delivered). I used blue threadlock and tightened mine as hard as I could with my wrench and then about another 30 degrees with my extension tube. 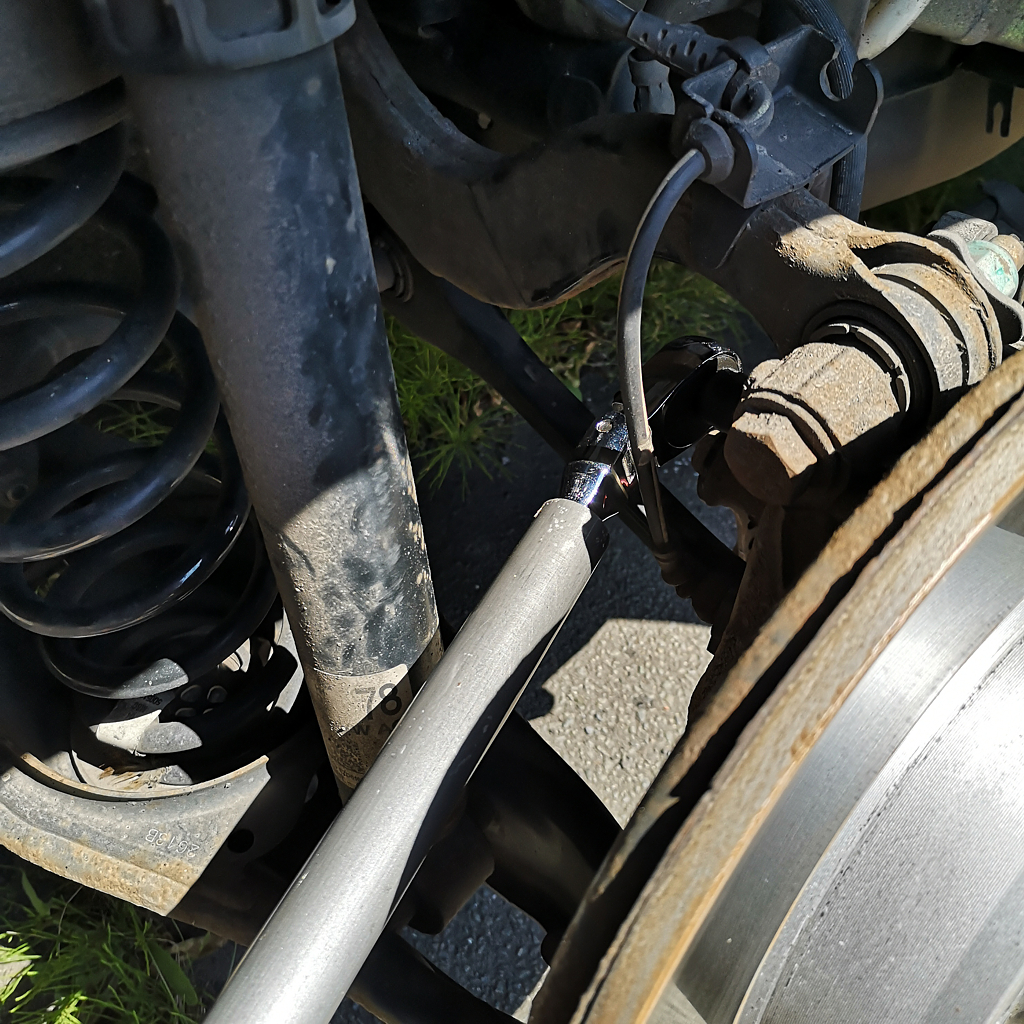 10. With everything tightened up, put your wheels back on and snug the bolts up and jack your car up enough to remove the axle stands. Carefully lower the car to the ground and torque your wheel bolts to the correct spec, 80-90 ft/lbs or 110-120nm for a Mk. 3 Leon. I took mine for a spin and was very pleased to see normal wear patterns on the new discs, god know how they'd gotten into the state the old discs were in 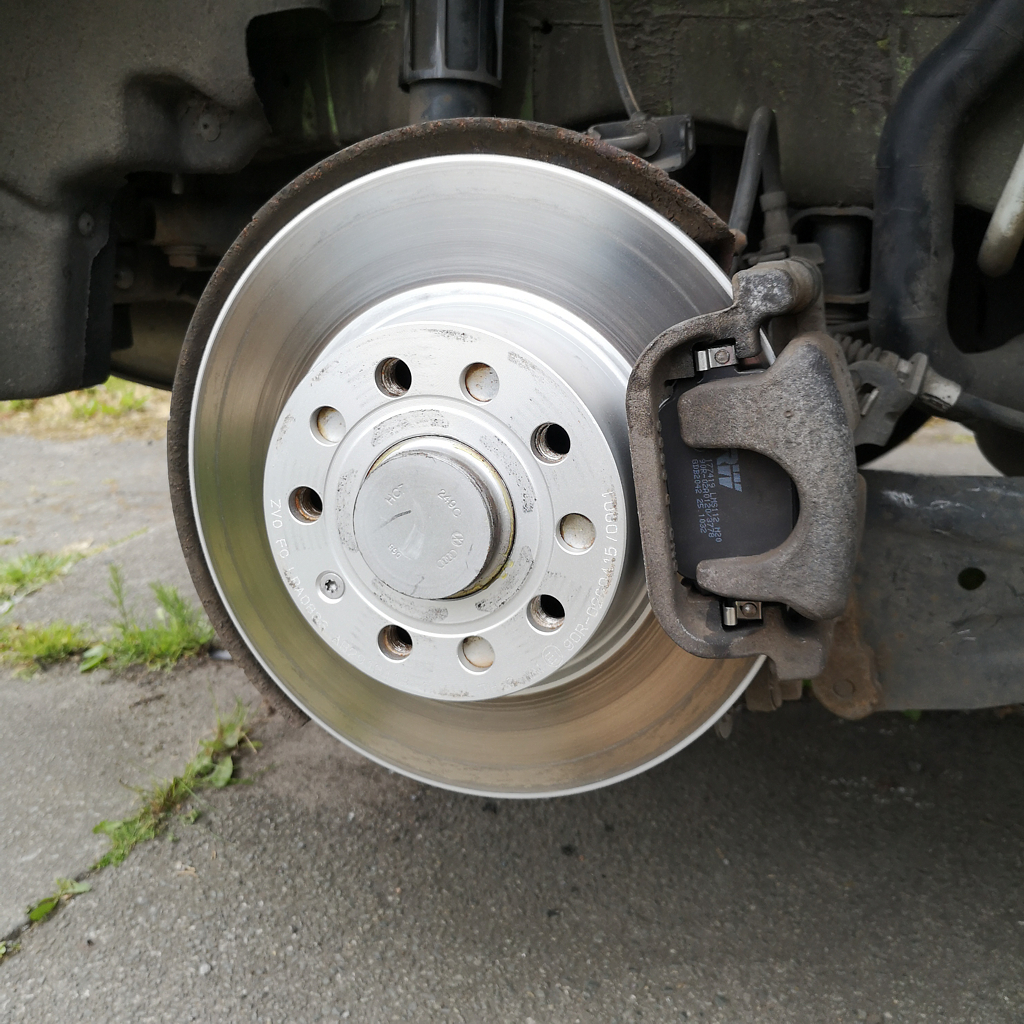 Cleaning up the hub face - you really should be using a rotary wire brush as you need to get the hub face spotlessly clean. You should then fit the disc and bolt it down with all wheel bolts/washers, then use a dial gauge clamped to an upright of the suspension to measure disc run-out. If the disc if running out more than 0.1mm then after a few hundred/thousand miles the pads can wear the high/low spots thinner - called disc thickness variation, this can then cause brake judder.

It's not a good idea to use grease when mounting the disc as even this can cause excessive disc run out leading to disc thickness variation & judder.

Also you didn't mention about winding back the piston/remove some brake fluid from the reservoir - although best practice you should undo the bleed nipple to expel the fluid rather than push contaminated fluid back up into the system .