Overview Updates (1) Discussion
Hi guys and gals,
This is an updated guide for how to fit an oil catch can for your 1.4Tsi engine. This is fairly simple and virtually anyone can do this with minimal tools. If you're wondering whether to bother fitting a catch can, google will explain much better than me, but essentially it helps capture oil from the air circulating from the engine back into the engine intake. Although it is only a small amount, over time it adds up and can eventually affect the performance of the engine/coke up valves & intake pipes etc etc. Since it's a relatively cheap mod to do, is simple to install and doesn't adversely affect the engine, I figured I'd fit one. The catch can I purchased has internal baffles to help separate the oil vapor mix.

Car fitted to:
2017 1.4Tsi ACT Engine code CZEA
As far as I am aware, other 1.4's with/without the ACT system should have the same/similar breather connections & locations as illustrated in this guide.

I acquired my whole setup from the internet, and in total it cost around £20.

First off check your tank to ensure it is sealed and won't leak once mounted, otherwise over time you'll end up with oil around where it is mounted. Some tanks may have a level indicator to make it easy to check how full they are, some also come with a drain plug. Ensure these are also correctly attached/tightened.

Once you've done that you need to select a place to mount the can itself. There is a handy location on the offside (Driver's side) next to one of the engine mounts that I found a good place to use. The engine mount also has an empty bolt hole that I used to mount it. Note that depending on which kind of tank you purchased, you may need to modify/create a mount that allows it to mount to this bolt hole. I had to slightly bend the mount provided with mine: 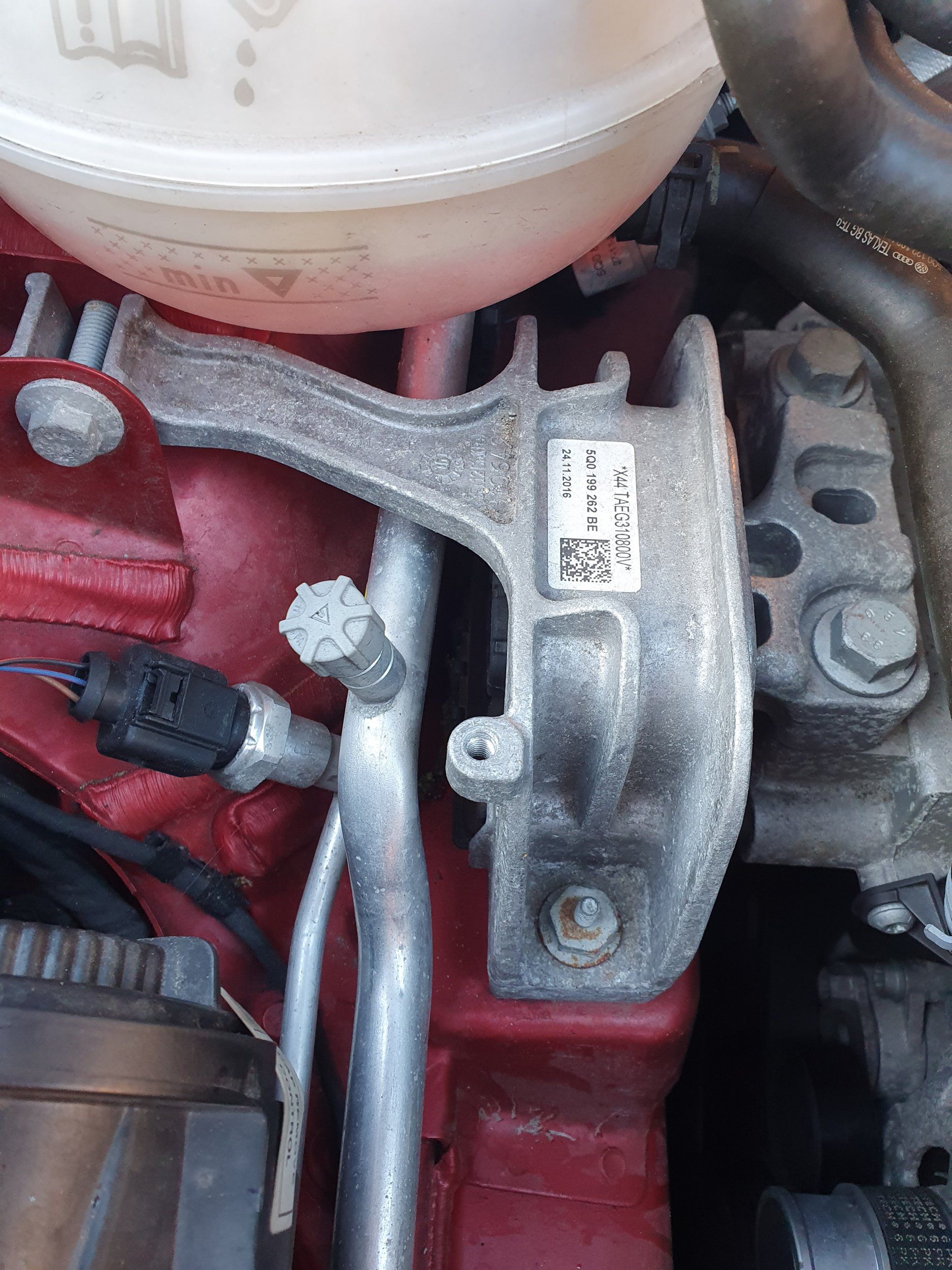 Can fitted in place 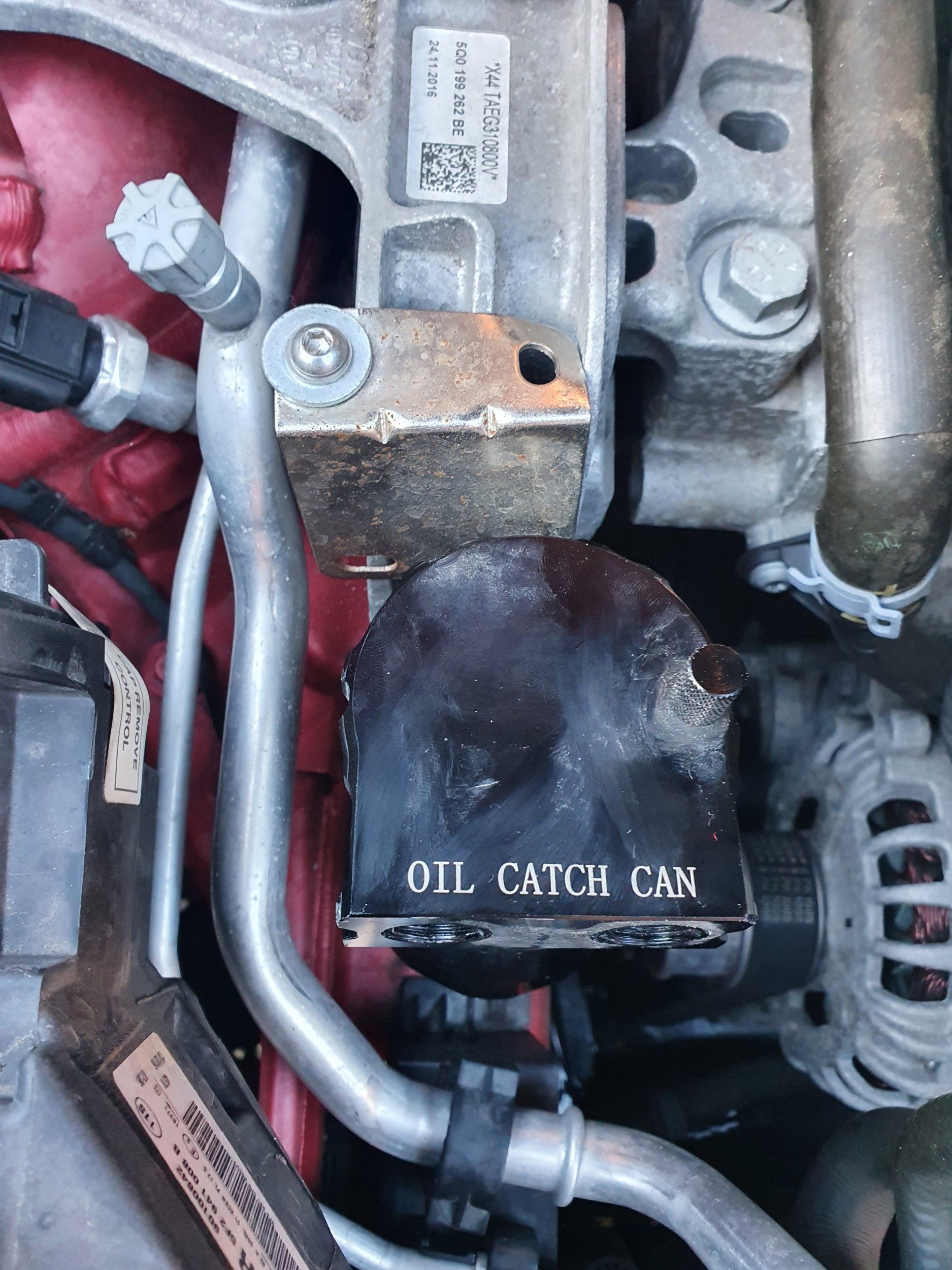 With the inlet removed, the breather pipe is secured with a T30 screw at either end. Once removed it just pulls out of place.

Please note this is not my image as I didn't get a picture before removing the pipe/my setup is different from original.
Green arrow shows inlet pipe, red arrow shows breather pipe to be removed. It is secured with a T30 Torx screw at either end.

Before removing the pipe, detach the smaller pipe connected on the battery end of the pipe. To remove, squeeze together the connection at the area marked here: 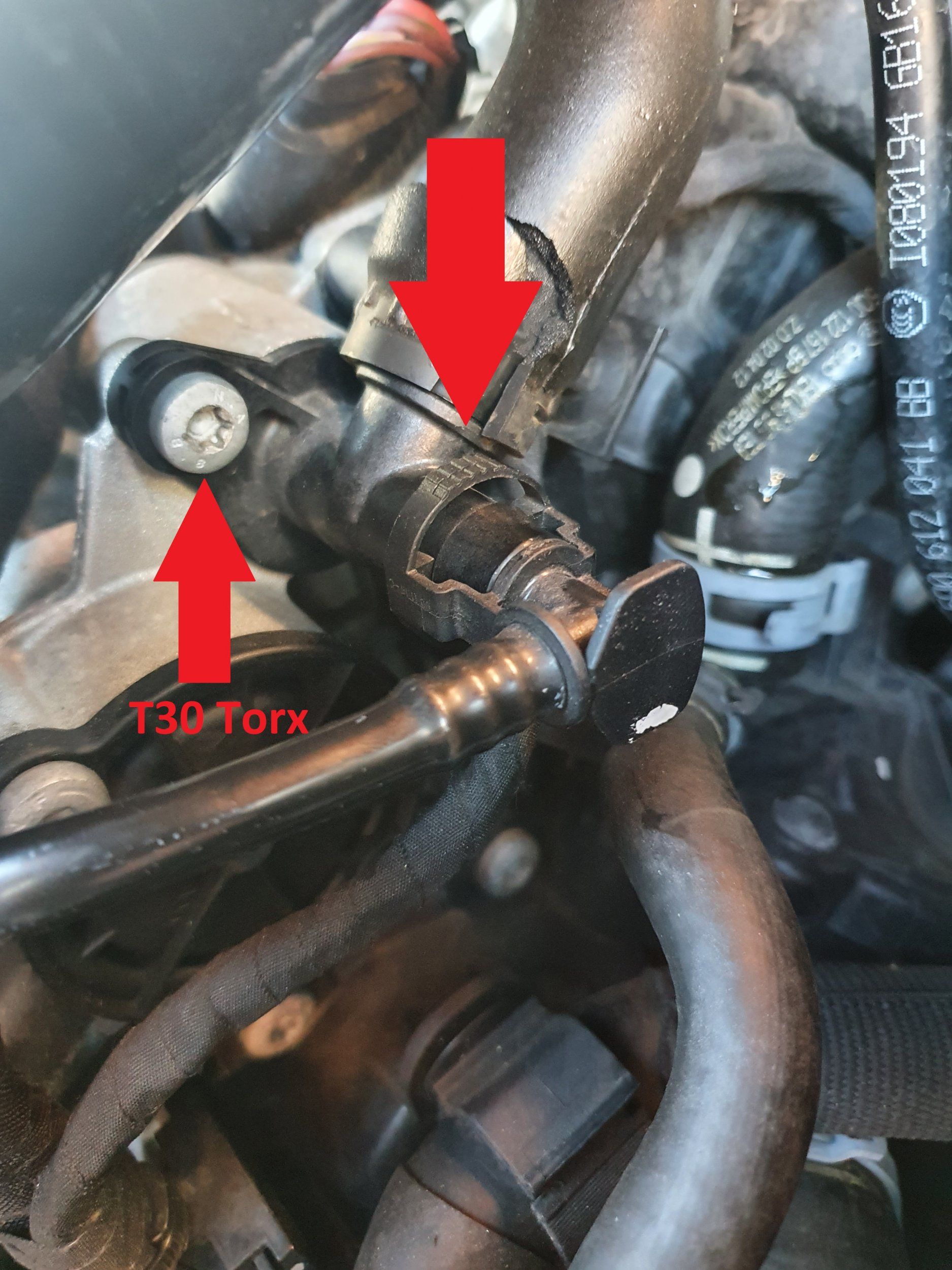 ETKA diagram of pipe to be removed. Pipe is noted as item '1': 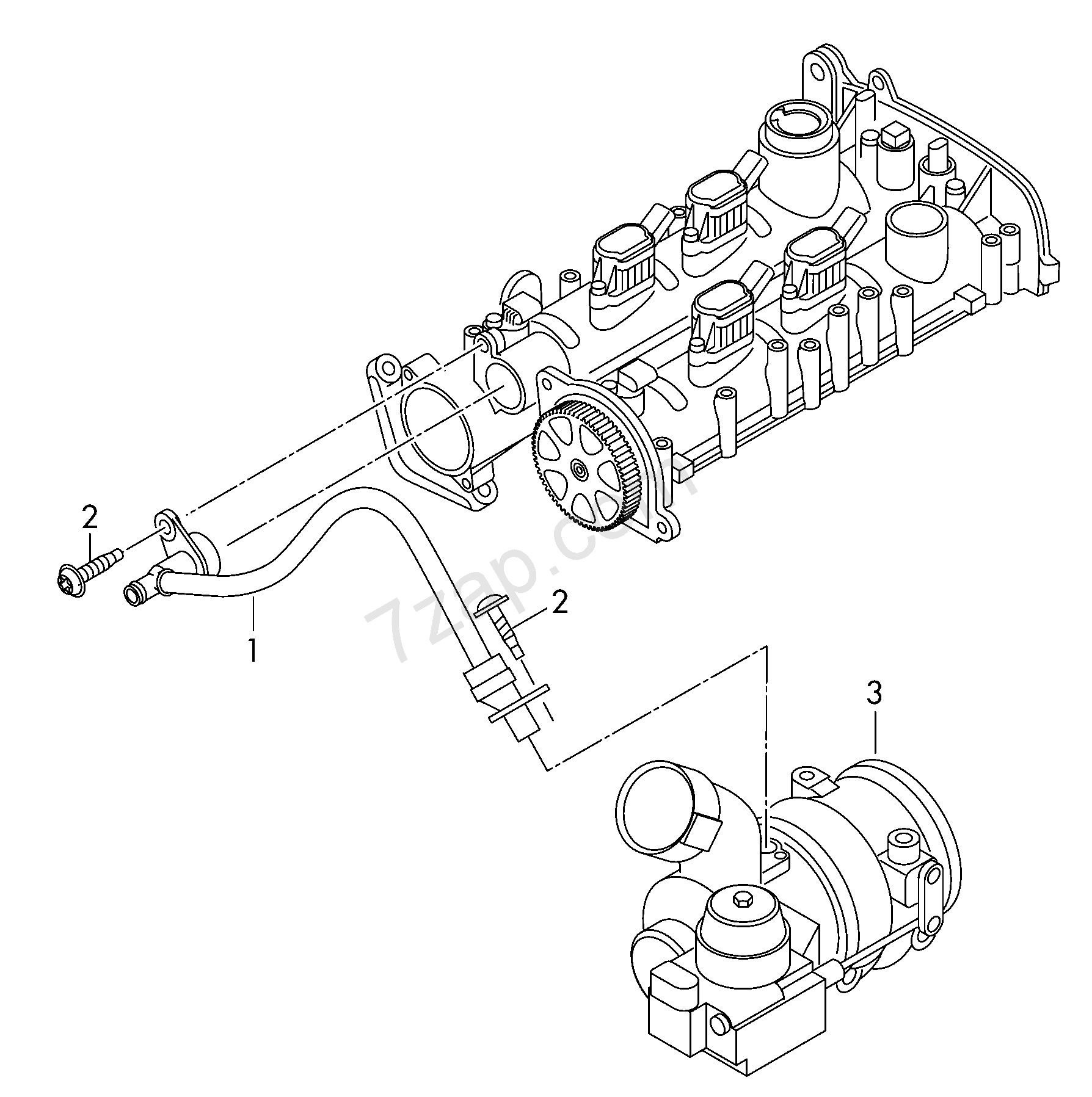 With the breather pipe removed, you need to modify it so you can attach your 16mm tubing to it. Firstly remove some of the insulation to expose the plastic pipe inside. I removed the insulation from the end that attaches to the turbo. The red line shows where I cut the pipe in half:

Then cut the pipe using a knife/hacksaw. Once cut, sand down any rough areas on the edges: 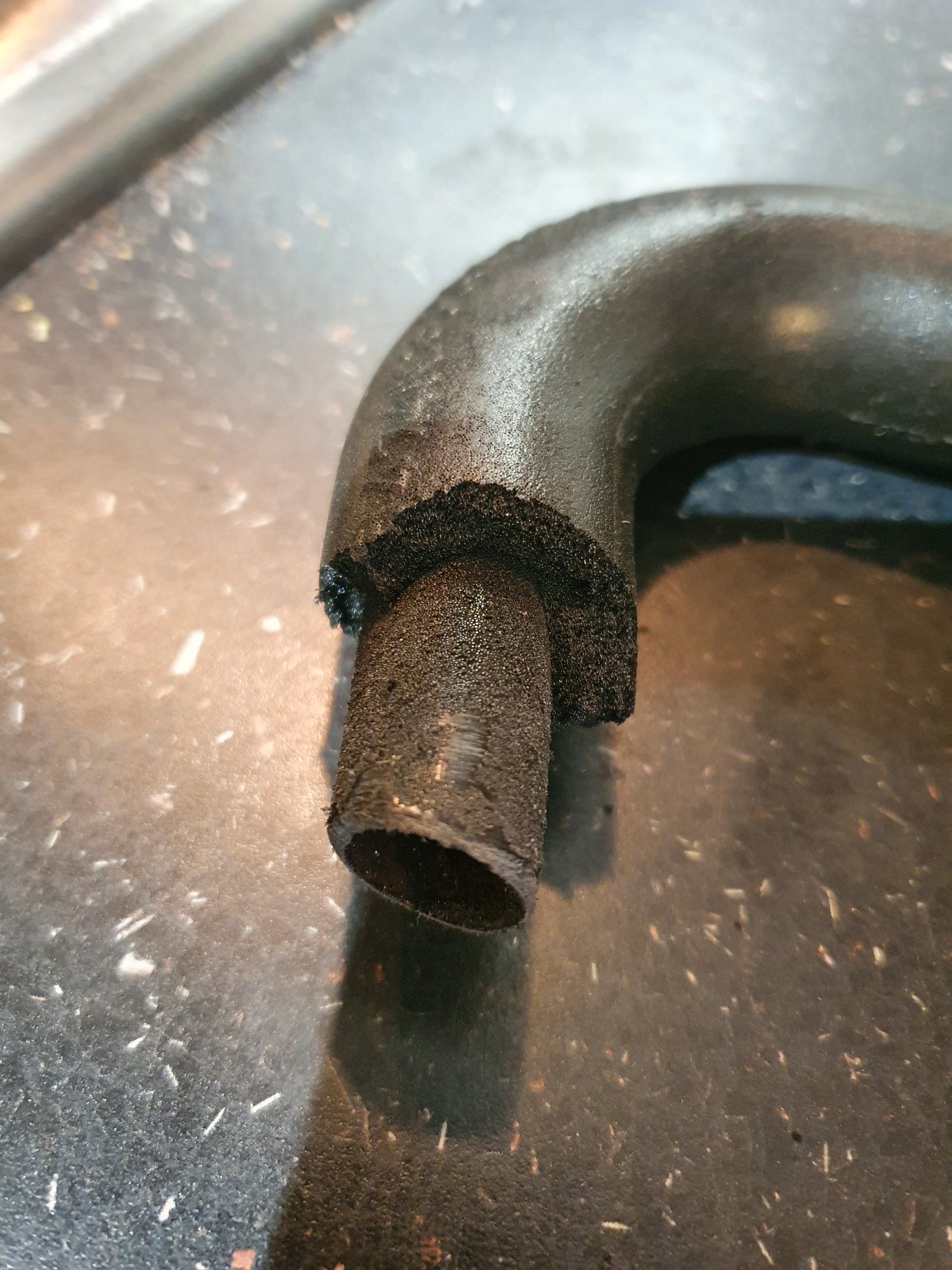 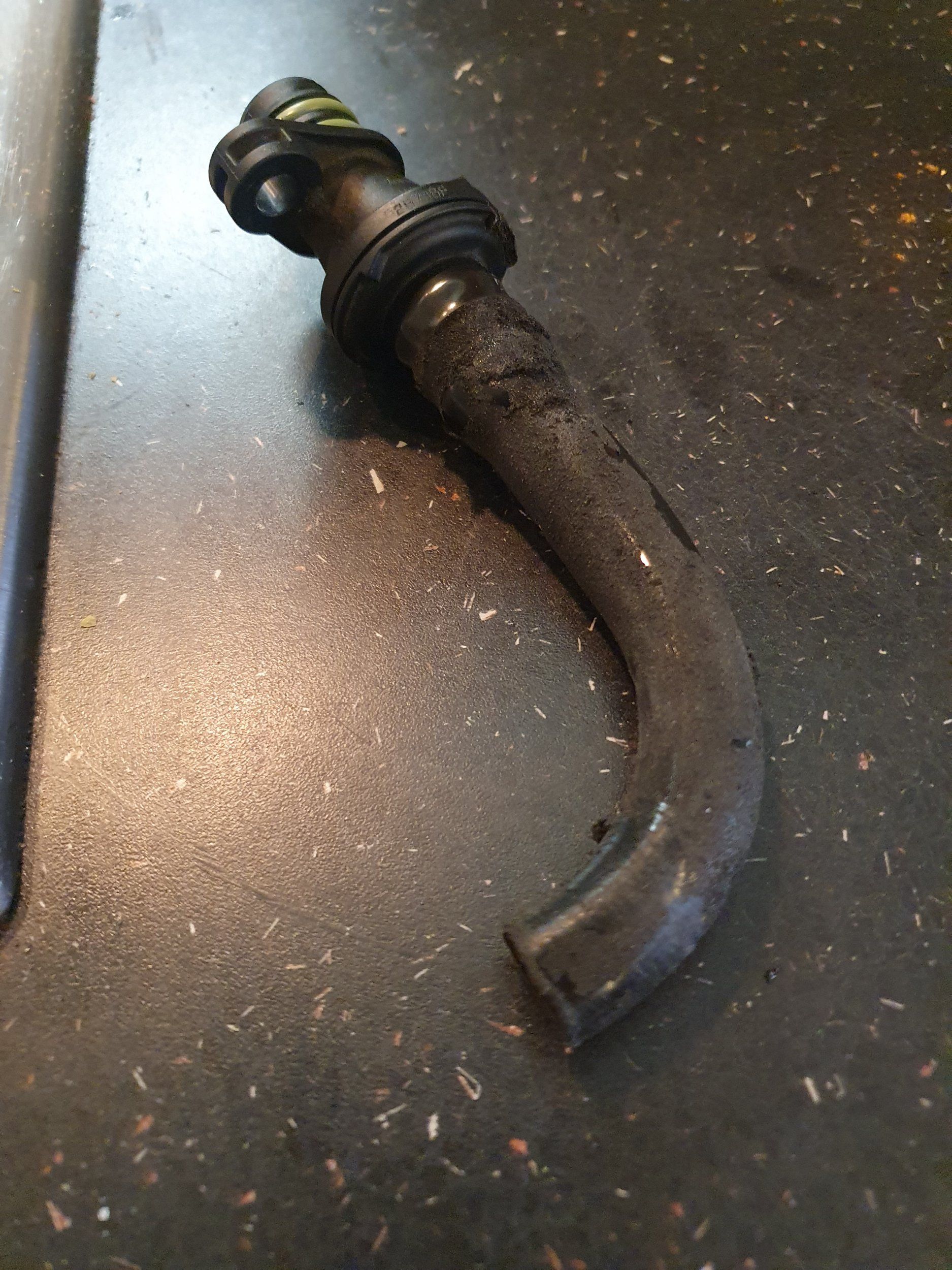 Once cut, twist the pipe on the half that attaches to the turbo. I found this easiest to do by gripping the mounting end of the pipe in one hand and the opposite end of the pipe in the other to get it to spin. This pipe is hard to twist but it will go with enough force applied. Go to the car and test fit it to make sure you it's turned enough so that it is facing towards the drivers side of the car as shown in the picture below: 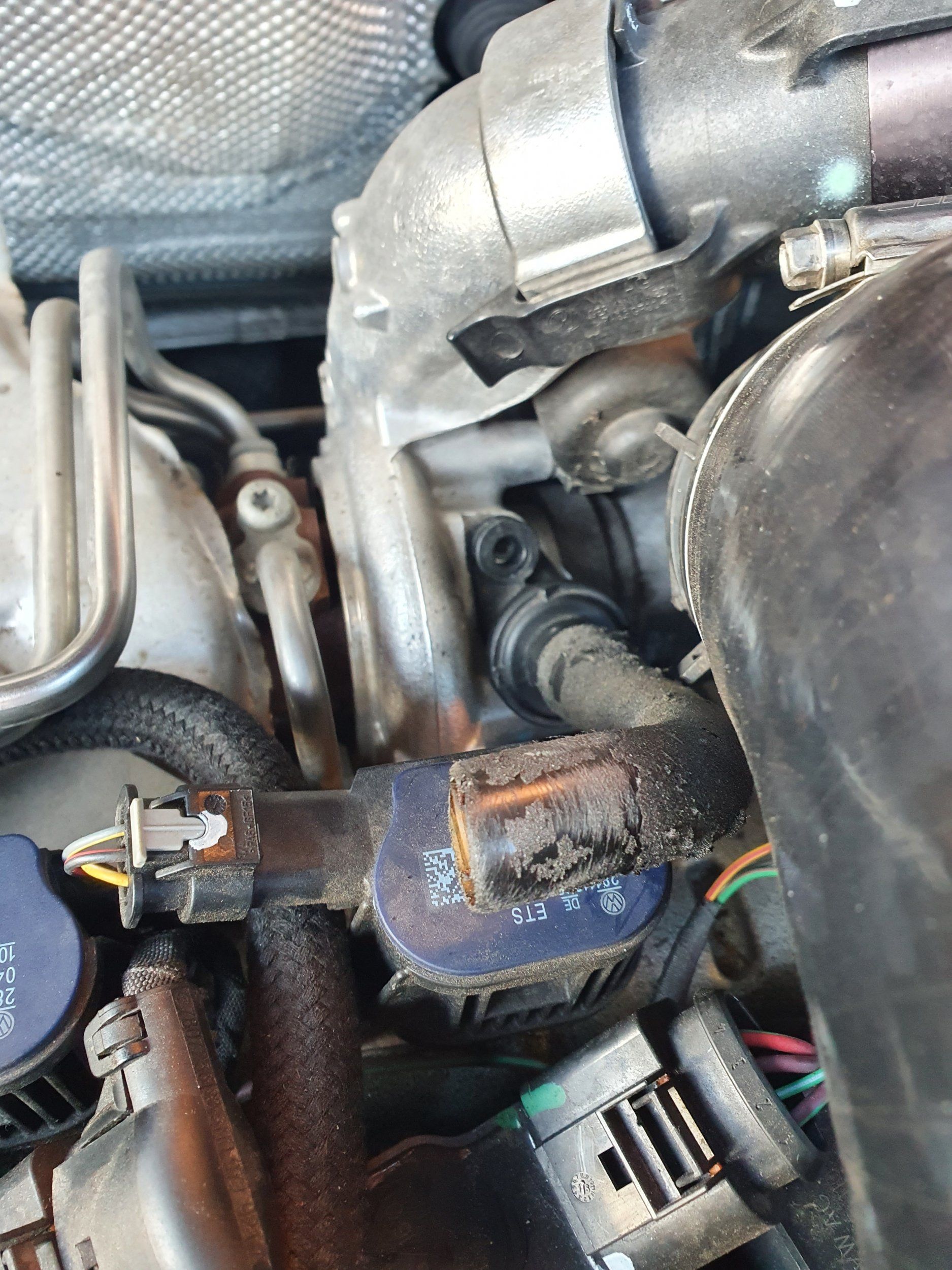 If you can remove the hard plastic pipe from the mounting ends then do that as you will get a better place to connect your new pipe. You will need to either heat it up to remove or cut it open and it will be tricky to do.

With the original breather pipe cut you can attach the new pipe to the ends. I cut my 1 meter length in half and temporarily secured them using cable ties. I also temporarily attached the fittings for the catch can in the opposite end of the pipe: 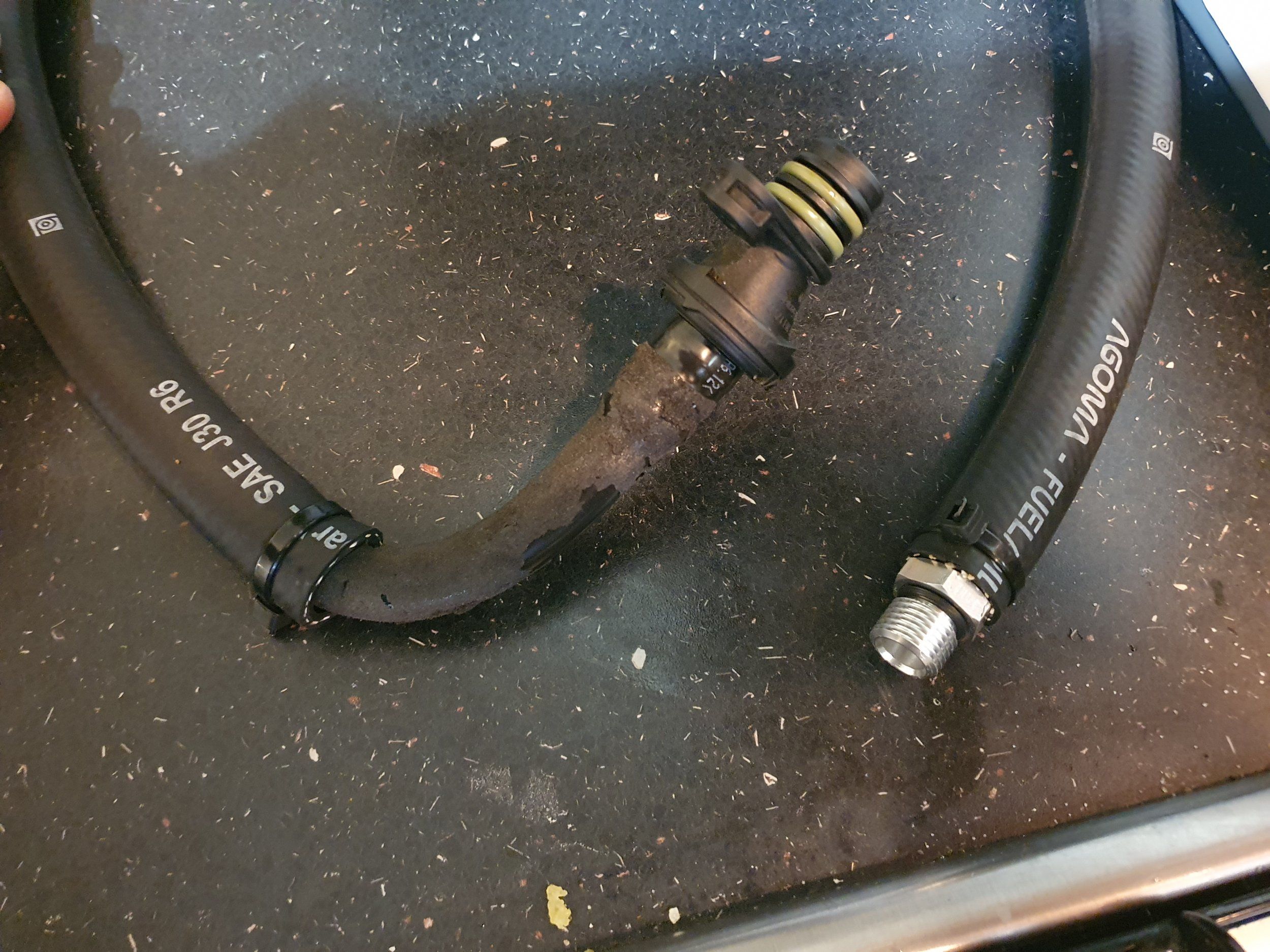 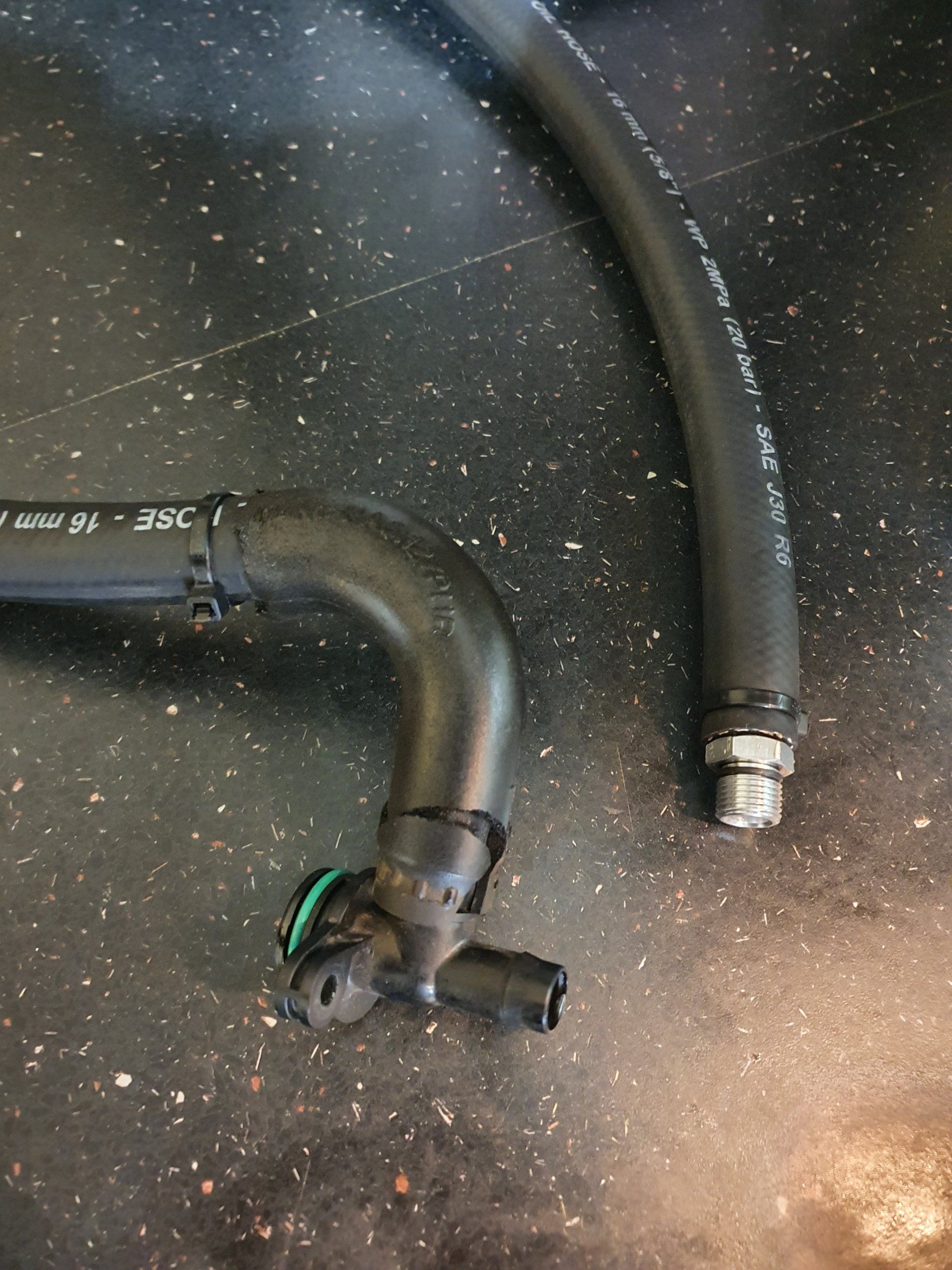 Now you can go to the car and remount the ends of the original breather pipe. Once done run the new pipes around the top of the engine to the area with the catch can: 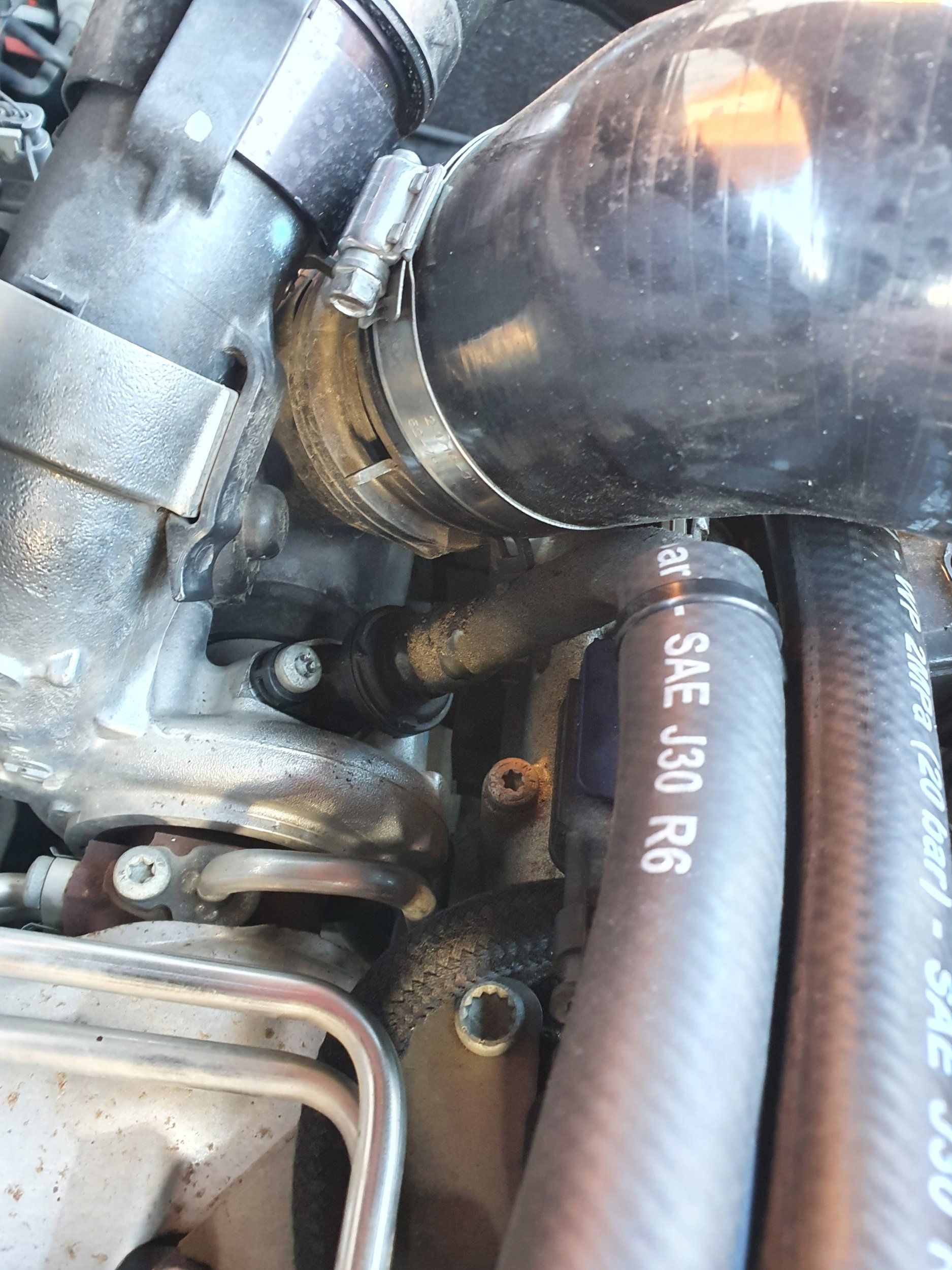 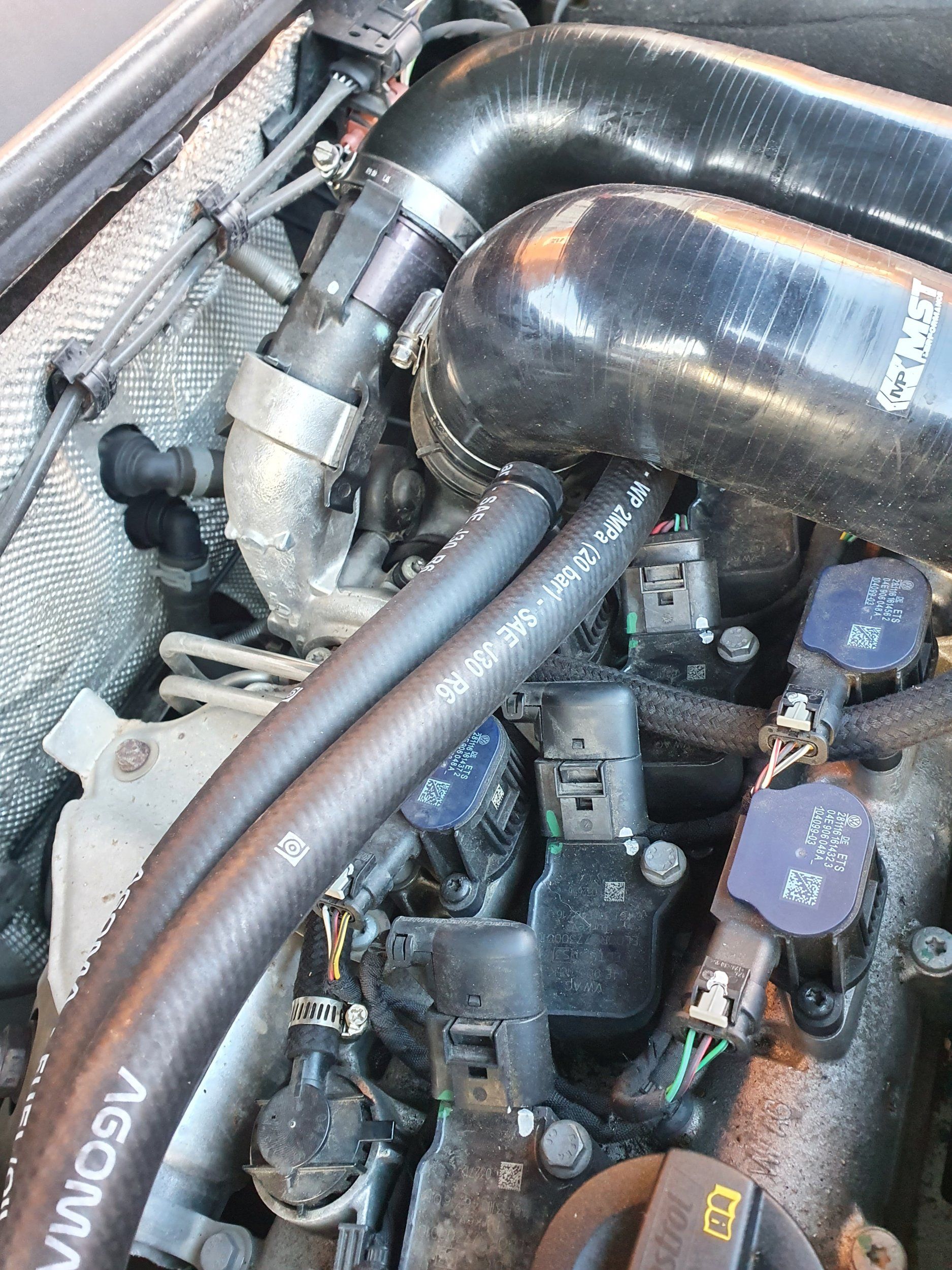 With the fittings in place, check if you need to cut any excess pipe. Ensure the pipes run around the top of the engine with no kinks and so that they don't interfere with anything else: 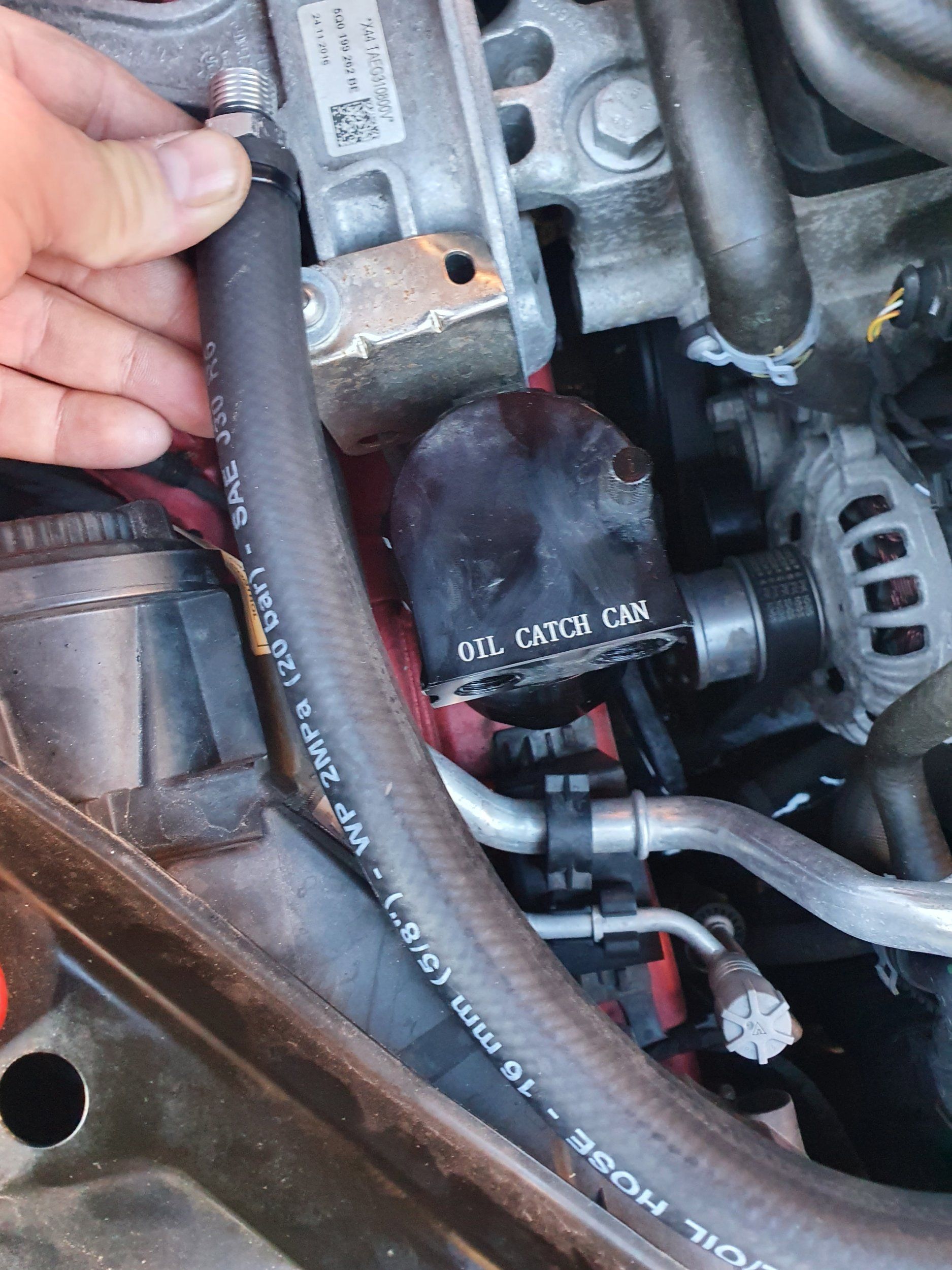 Connect the fittings to the catch can ensuring they are tight and there are no kinks in the pipes. Make sure they attach to the correct in/out ports if your catch can has these: 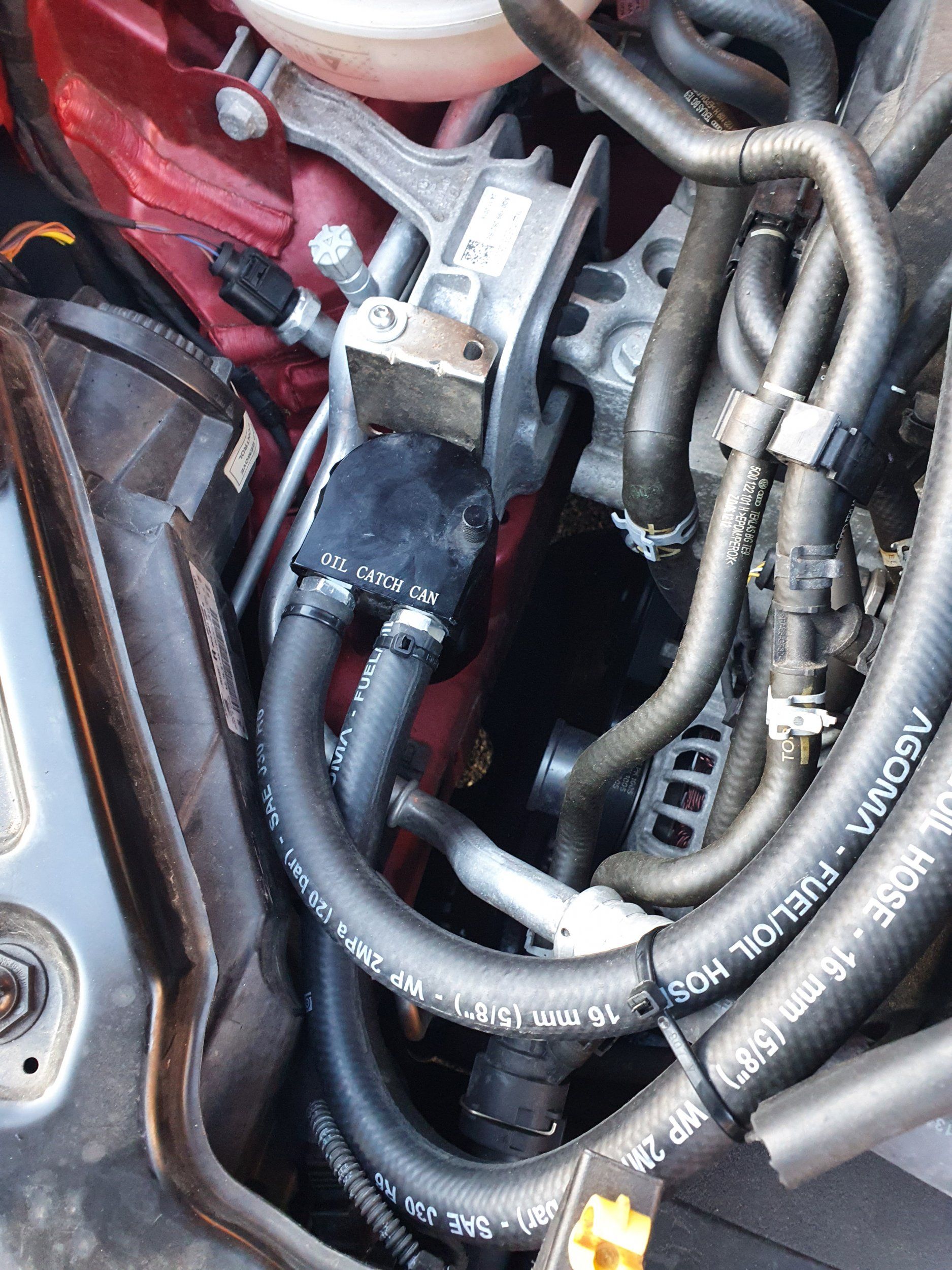 If everything fits correctly as it should, replace the cable ties with proper jubilee clips and tighten up all connections and screws.
Cable tie up the pipes to ensure they remain secured: 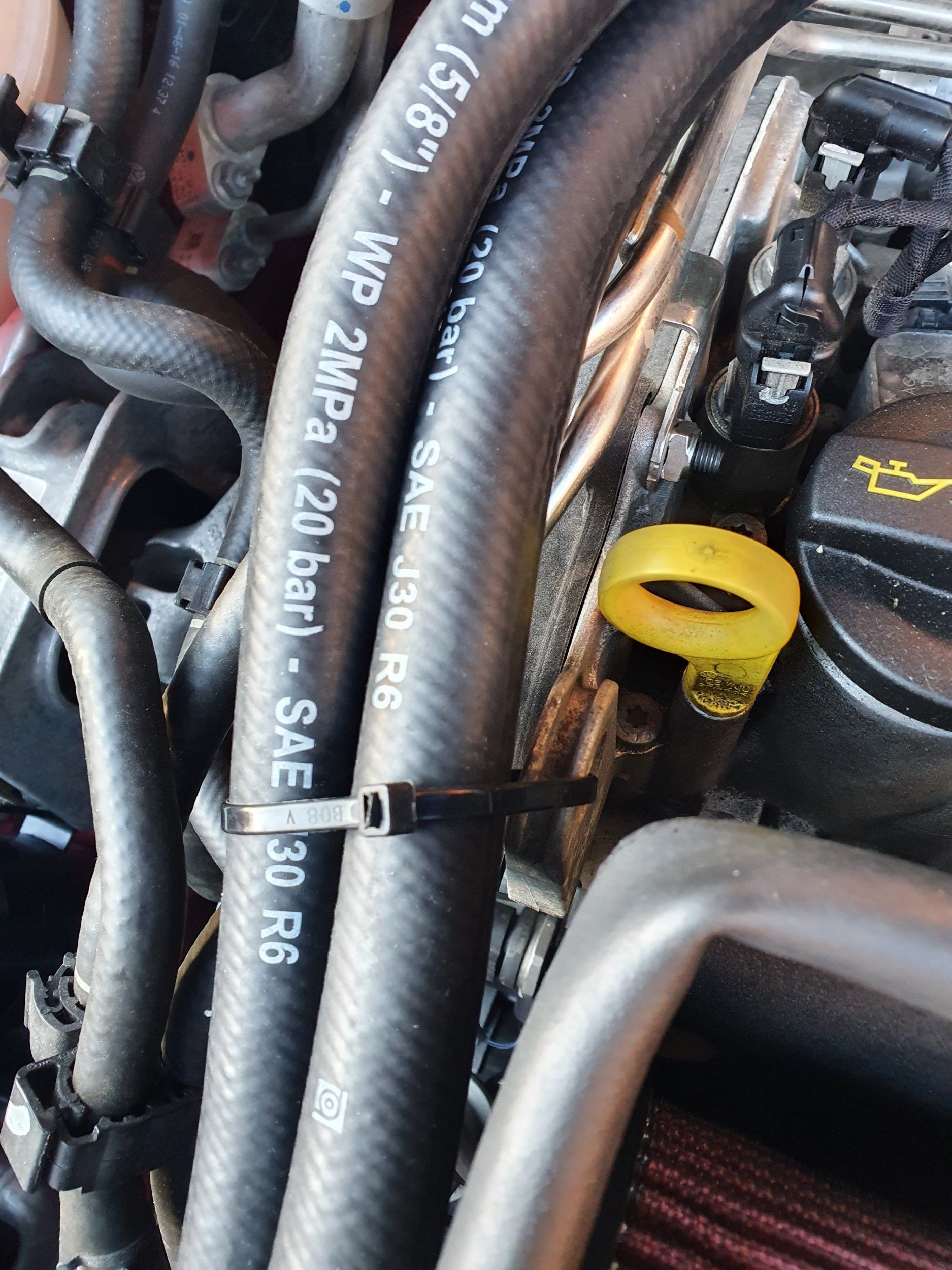 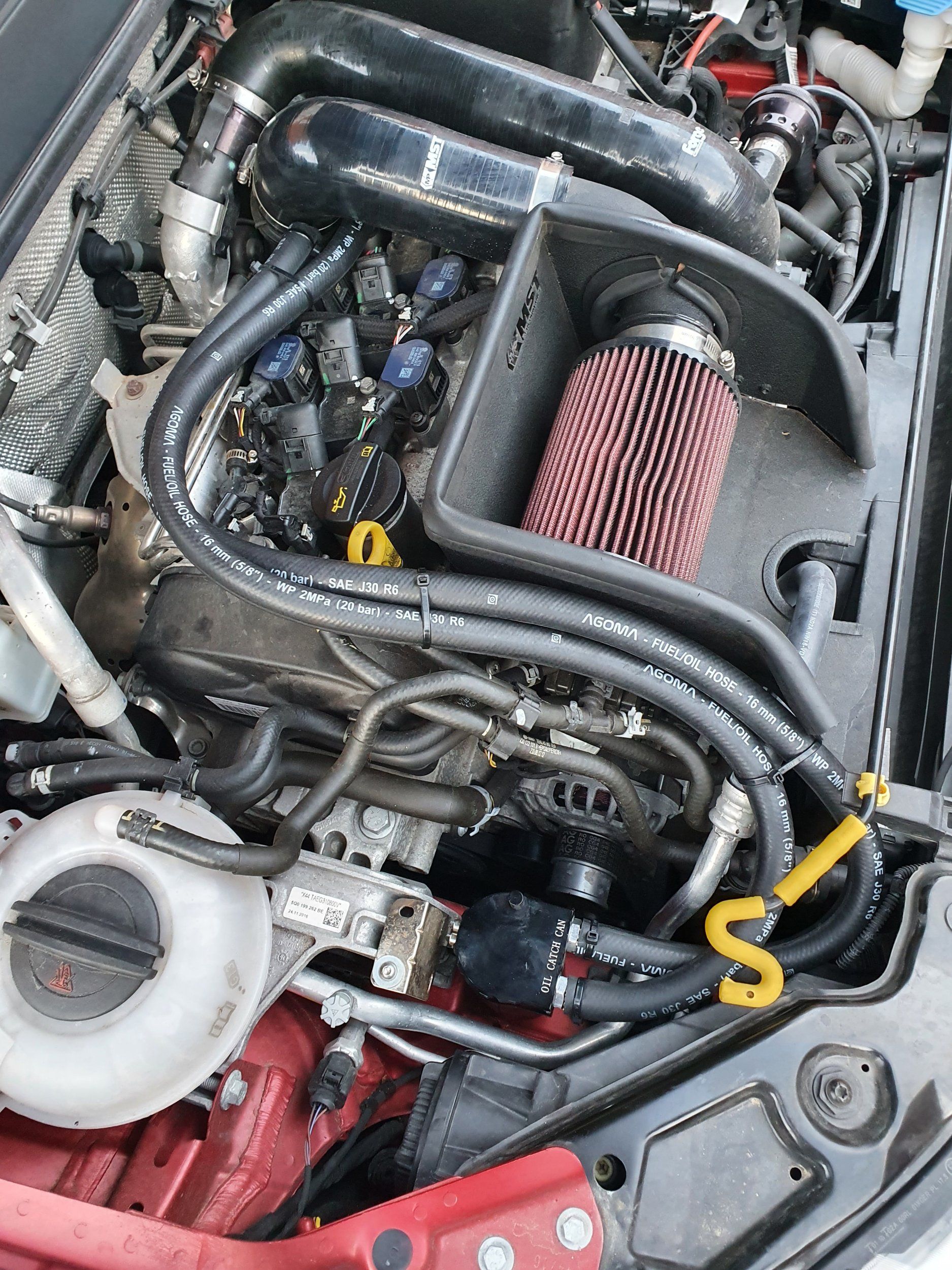 Now you can start the engine and check for any air leaks. Once checked, all done! Simply keep an eye on the tank over time and empty it when required.