what have you done to your car today ?

My car has been quite lumpy lately in early gears when its cold. Although my SAI is on its way out so not sure if thats related to it.

I am looking for the same idea but for the boot of mine. As it's a fibreglass boot and no locking mechanism I want one just to fit in the hole

Personally I wouldn't go for iridium plugs. Basicly. They say they last 2-3-4time longer than normal plugs. They may well do but this is because irridium is a hard metal and poor conductor. They way it works is the softer the material the better conductorso better the spark. But the spark wears away the electrode. Silver plugs are brilliant but don't last as long as say normal ngk plugs. Nor do copper 9nes but they last longer than silver.. now the other end of the scale is thing like irridium. It wears slowly so lasts longer but the spark isn't as good so the "explosion won't be as big so less bang less power. It may not be notice able it may well just be 1-2 but at the most but if your having problems I would just go for standard spec ngk or Bosch as they are both well up for the job and that's what they would have left the factory with.
Reactions: 20VT_AUQ and iammooks

The iridium thing baffles me. It's so rare that there are years they can't even dig any out of the ground, and the most we can produce is 3-4 tons per year...

It’s probably a minuscule amount mixed in with other metals then advertised as Iridium!!!!!!

Went to remove my mirror cover and respray it up with 2k as it flaked badly from sitting in a dealership. Simple task...

Turns out my DS mirror doesnt fold in... because the prat before me broke it and decided using some form of rubber glue to lock it in place is a good repair! Might be why my mirrors dont adjust from the switch inside

bruceR said:
It’s probably a minuscule amount mixed in with other metals then advertised as Iridium!!!!!!


Sent from my iPhone using Tapatalk
Reactions: Manic172 and bruceR

I should have taken a 'before' photo, but I'm sure you can imagine what fifteen years' worth of black crud caked to the inside of a windscreen washer reservoir would look like...

bruceR said:
I should’ve read before looking at photo…………I thought this was your loo

I can't remember the last time my loo looked that clean...

All sorted and put back in the car now though. Gave it a good scrub first off with boiling water with some vinegar added, scrubbing as best I could with a dishwashing brush and a toothbrush, and then let it soak for a while with boiling water and bleach. Took the scuttle off too and put compressed air through all the hoses. Used one of those TePe flossing brushes on the nozzles too just to make sure they weren't blocked.

The funny thing is that when I took the reservoir out of the car, it was more or less empty. I'm guessing that the sensor was so gunked up it couldn't tell if there was water in there or not.

Took half the day to do it mind, but at least that's one less thing they're not going to fail me on tomorrow.
Reactions: BadBoy03 and bruceR

Looks awesome, I might get one for my 2003 Toledo but I would keep the front "S" badge, I want the cupra tribal logo for trunk.

Mamic172 said:
I have just sort of noticed I sort of been posting a lot in here.... so gonna go find the build thread I started and then start that up again.... Sorry boring any one in this bit
Click to expand...

Not boring at all pal. Cant wait to aee2hwr built

Thai-wronghorse said:
I'm intrigued as to how you're going to utilise that roof light.

Sent from my SM-G960F using Tapatalk
Click to expand... 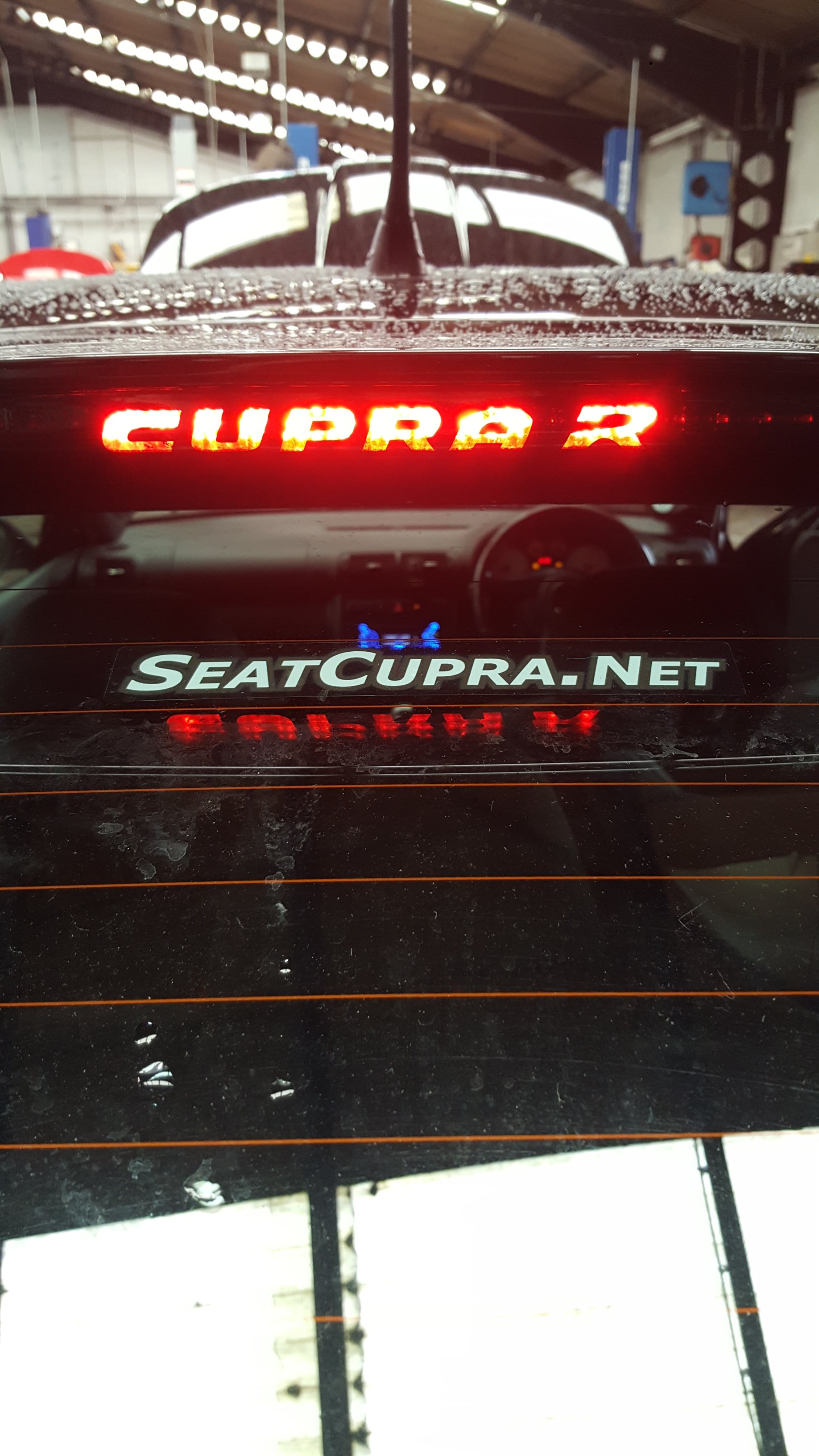 No eml on my dash is like finding a 20 in the sofa lol
Reactions: BadBoy03 and Yellow fr

Oh i forgot if u havent already bought thr bosh platinum ive got four for free if u pay postage. Only on for six minth. Up 2 u m8

bigT's lcr said:
Do this

BigT, it’s the interior rear reading light I got and not the rear brake light!!

Ohhhhhhh... You're going to love this one...

Dropped car off for its MoT, decided to wait around as I couldn't be bothered to walk home and then back again. Guy comes into the office asking if there was a way of opening the boot. I've been having trouble with my boot release, so thought someone had just pulled something the wrong way and caused the boot to lock itself. Crawled into the boot over the back seats and pulled the release manually. It opens it, but when you closed it again, the handle wouldn't open it.

Start panicking. Sounds like the release is properly broken now. Cancel the test, order one from a breaker's on eBay. Rebook for next Thursday.

Get it home and decide to take it out of the car and strip it down. Nothing seems to be working until I put the key in the lock and turn it. Everything works as normal.

The MoT tester had obviously tried using the key to open it. They'd locked the boot manually. Once it's locked, the keyfob won't unlock it - you have to unlock it with the key.

Nobody had told me they'd used the key.

We were trying to open a locked boot.