You are using an out of date browser. It may not display this or other websites correctly.
You should upgrade or use an alternative browser.
Overview Discussion

Polly said:
Thanks for the prompt feedback Tell.
Sorry it is still complicated news.
I was so used to regularly updating my Renno online. New map yearly. Connected sim for instant traffic updates etc.
Heyho mine is a better car.
Click to expand...

Regretably until Seat adopt the VW / Skoda approach of scrapping Mapcare you still have to do these workarounds if you want to do it yourself, one is the small presentation change to the files for the standard unit the other is the retrofit firmware update for the high (more surgical). Once, neither is not too difficult to do the updates, although some computer skills required in presentation of the files. Having the firmware changed to retrofit for the high isn't something you can do yourself thou.

Thanks for another kind update Tell.

Can anyone tell me which version I have

Last time I checked I don't have an SD card plugged in...

-antero- said:
Can anyone tell me which version I have

Last time I checked I don't have an SD card plugged in...
Click to expand...

Ive got a 5f mib1 version my question is if i purchase a new sd card from seat they are on offer for €99 now in the Netherlands can i install it myself or does it need activation in the mib1 system by Seat stealer?

Experience is you need the dealer to do it, then it's whatever is cost effective, buying from them and them completing the job or presenting them with the card.

thx for the answer im on ece2018 version ill try it on vacation in Italy this year will see if its reseanoble update.

I have the Satnav on the SDD so what version do I have? (66 plate) also am I able to update the maps ?

Goto post 1676 - Polly one. If mib2 high I got mine turned into a retrofit then I can update them myself. Some risk and hassle but money well spent. The Ateca Cupra people will have this issue as being the only unit they can have in the dpec. The high (plus) is a better unit whilst the standard has programming bugs whether those bugs will get sorted out not sure.
Last edited: Jun 12, 2019

or you can pick it up from the direct link

Currently the Mib2 standard release for June has not appeared yet.

Currently the Mib2 standard release for June has not appeared yet.

Tried to download it on Thursday evening, had to give up as it was so slow, tried again Friday morning and it downloaded very fast, about 50mins.

Walone said:
Tried to download it on Thursday evening, had to give up as it was so slow, tried again Friday morning and it downloaded very fast, about 50mins.
Click to expand...

The VW tends to be faster in the past. The Skoda with the download manager is better for wobbly internet.
Reactions: Walone

It's just broken cover via the German Skoda board picking it up via the VW website as expected, credit Nixneues for finding it and Lesnovak of this board for the all European release which appeared on the 18th June.

The zoned release for Europe can be be picked up via the VW board or directly from the links.

Go in on a Golf model from 2017, Discover Media those files labelled "Updated: : 6/17/19" (or after if more). The ones before this date are the old maps of the November 2018 released or the all Europe one put together from the November 2018.

This leaves us to think whether they sorted out the bugs in the previous release:

Will look at those errors in this release.

I see they have not corrected the mistake they put in, in the last release of incrementing the release year six months ahead of what it should be, so this comes up as 2020

Report any issues identified so we can learn.

These are indeed TomTom sourced maps that the VAG group use for the standard release. Report any road issues via the TomTom reporting tool which is easy enough:

OK they have sorted out the trailer speed issue now in this standard release. All speed limits appear to be there except motorway speeds where they expect you no-doubt to know the speed limit least in the UK. Routes are still a bit odd taking more the direct route threw lanes where the high unit keeps you on more sensible roads.

Still idiosyncratic about not showing all of the roundabout directions till on it in the left panel if you are going round it. You probably get use to that. In the test dummy run it gave the motorway sign-age below when going round a round about. 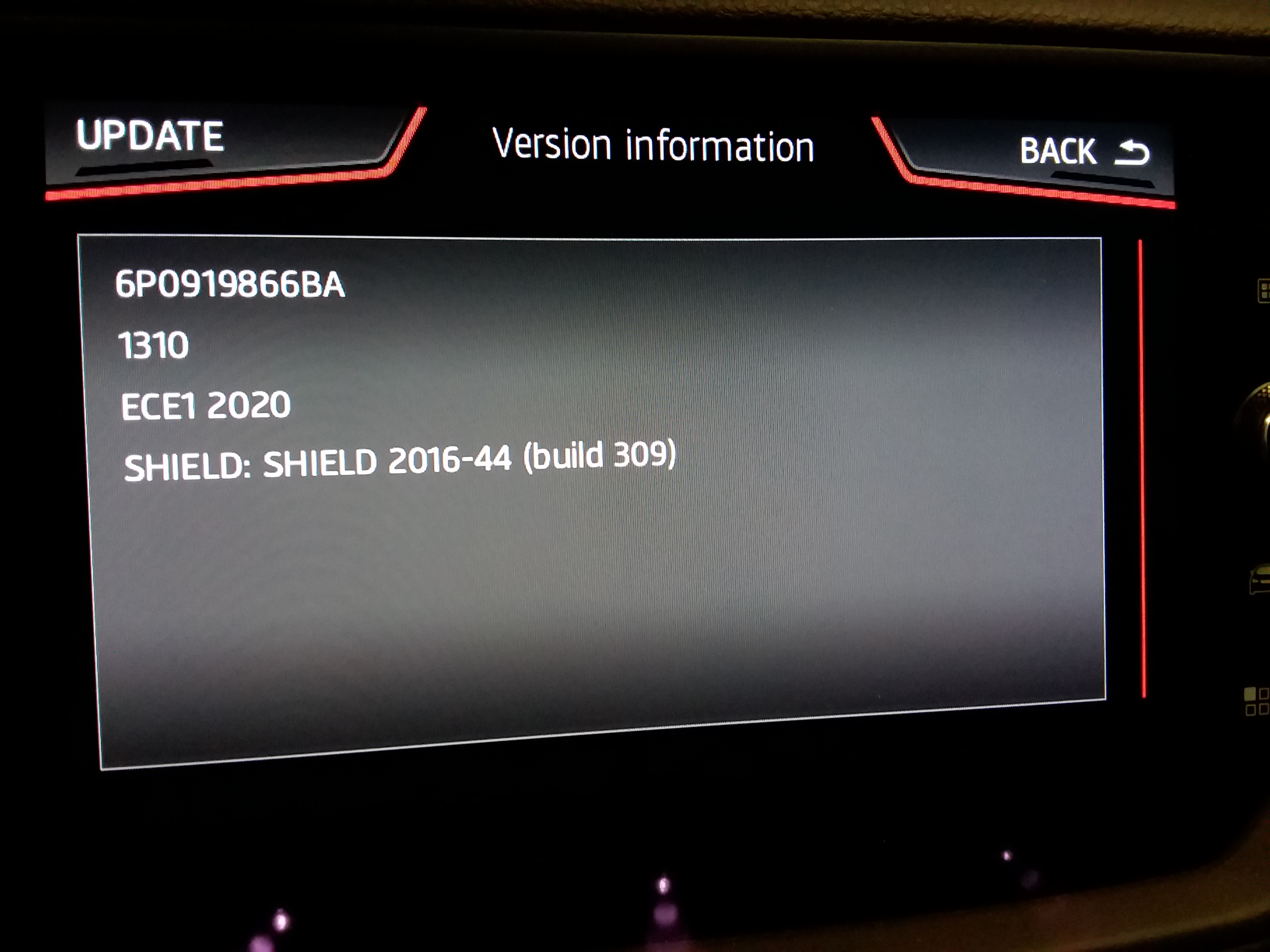 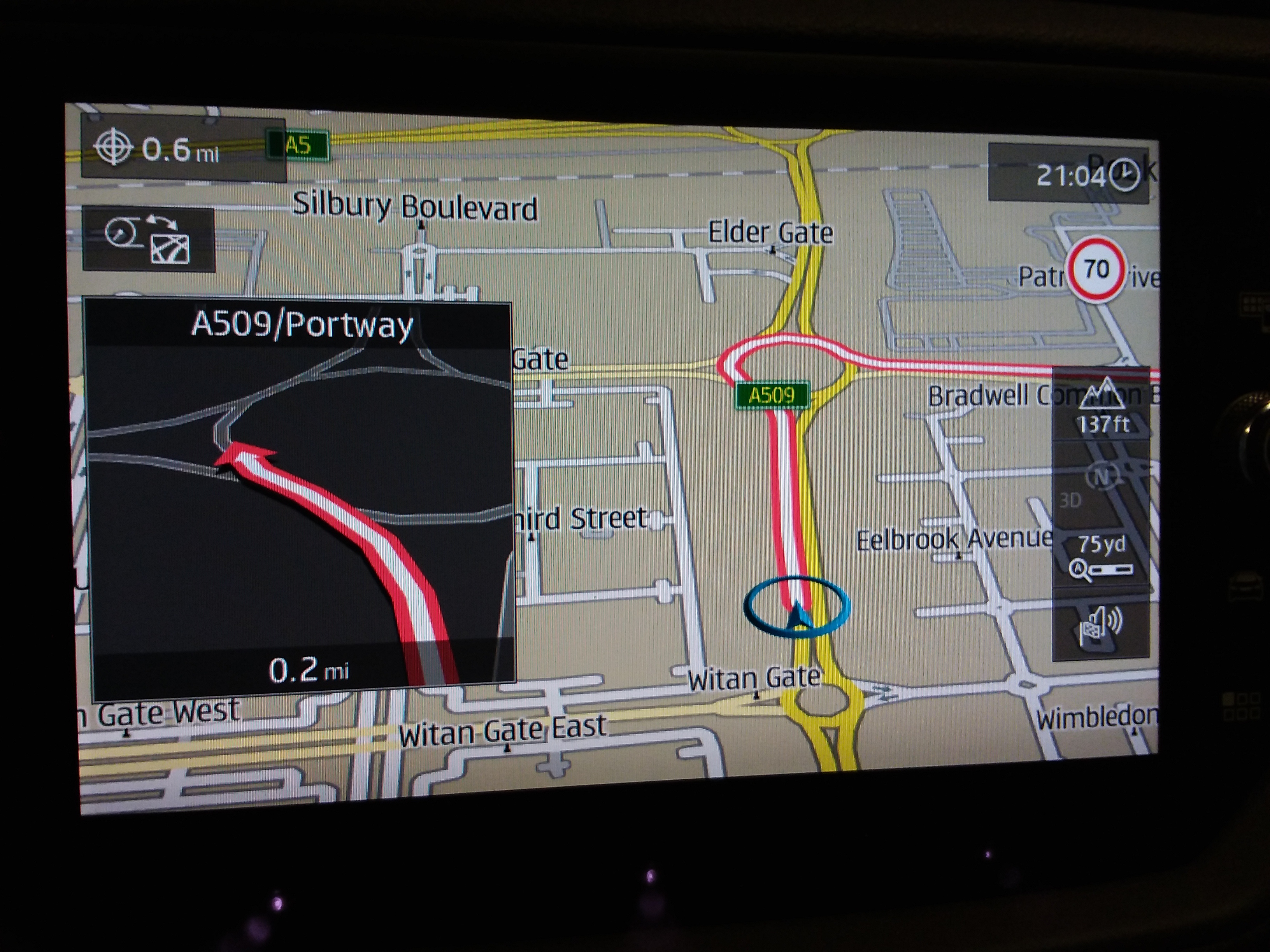 Correct if straight on: 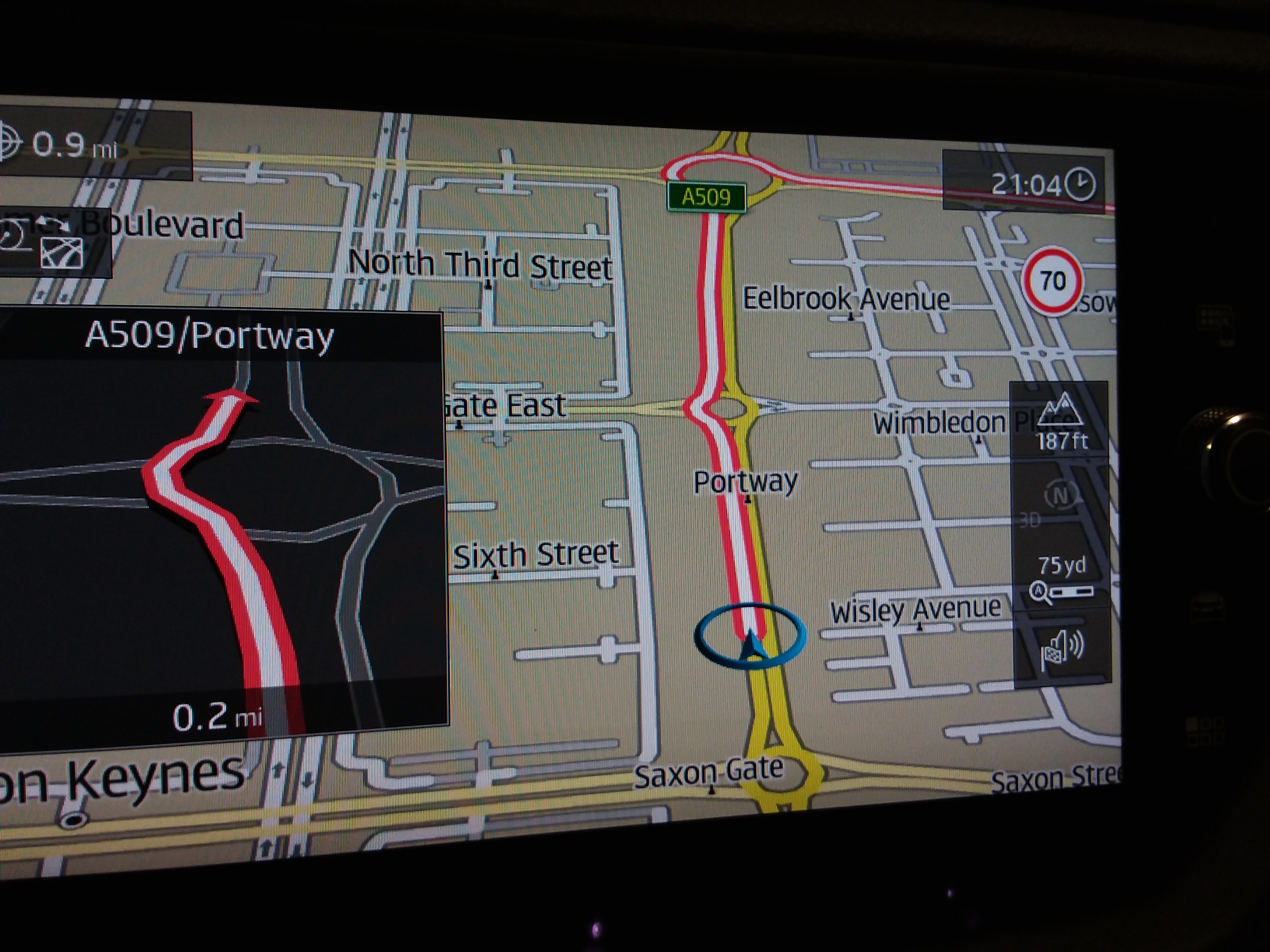 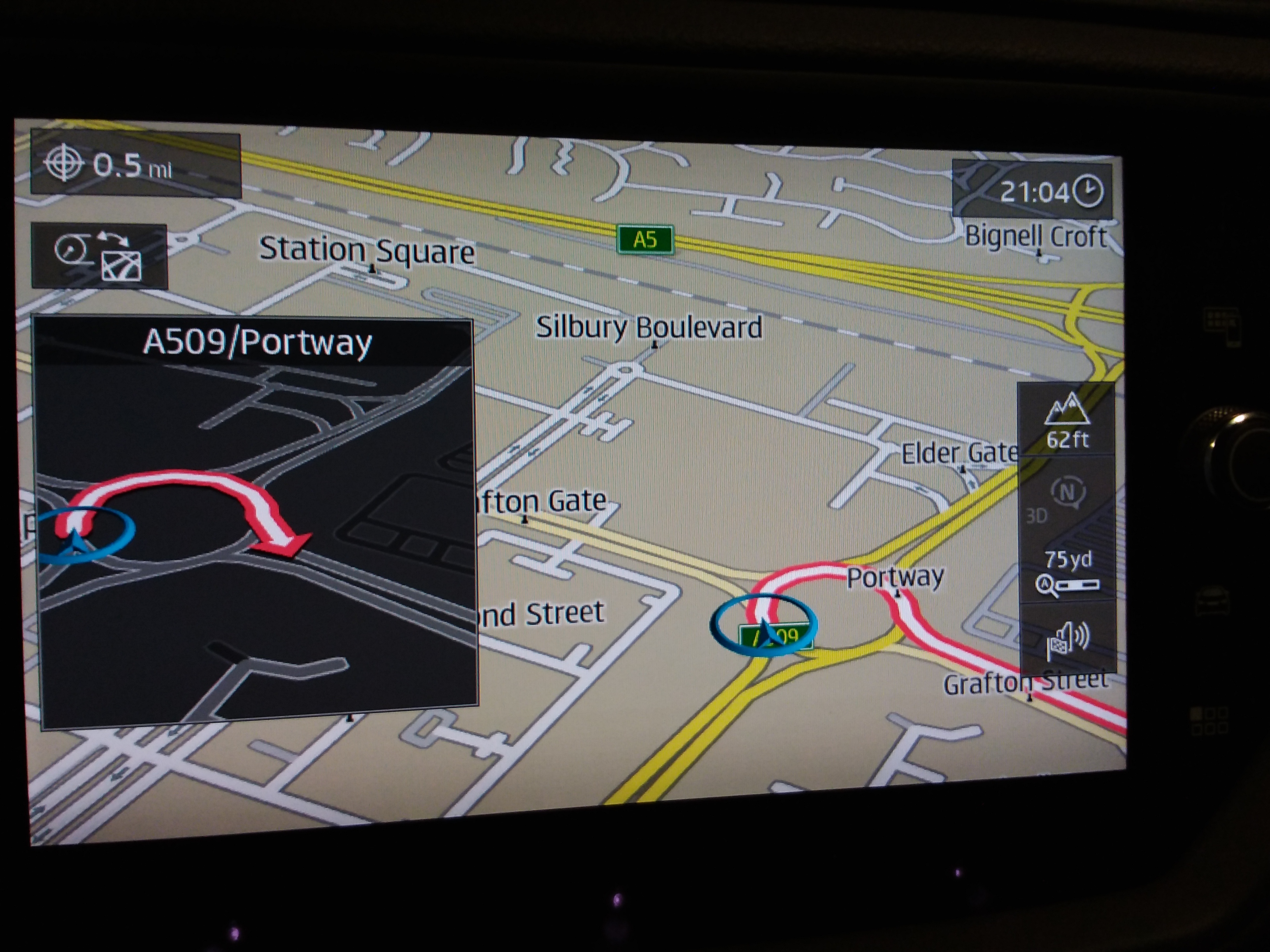 But hang on that direction is from the M1 and we are not on it (interesting one): 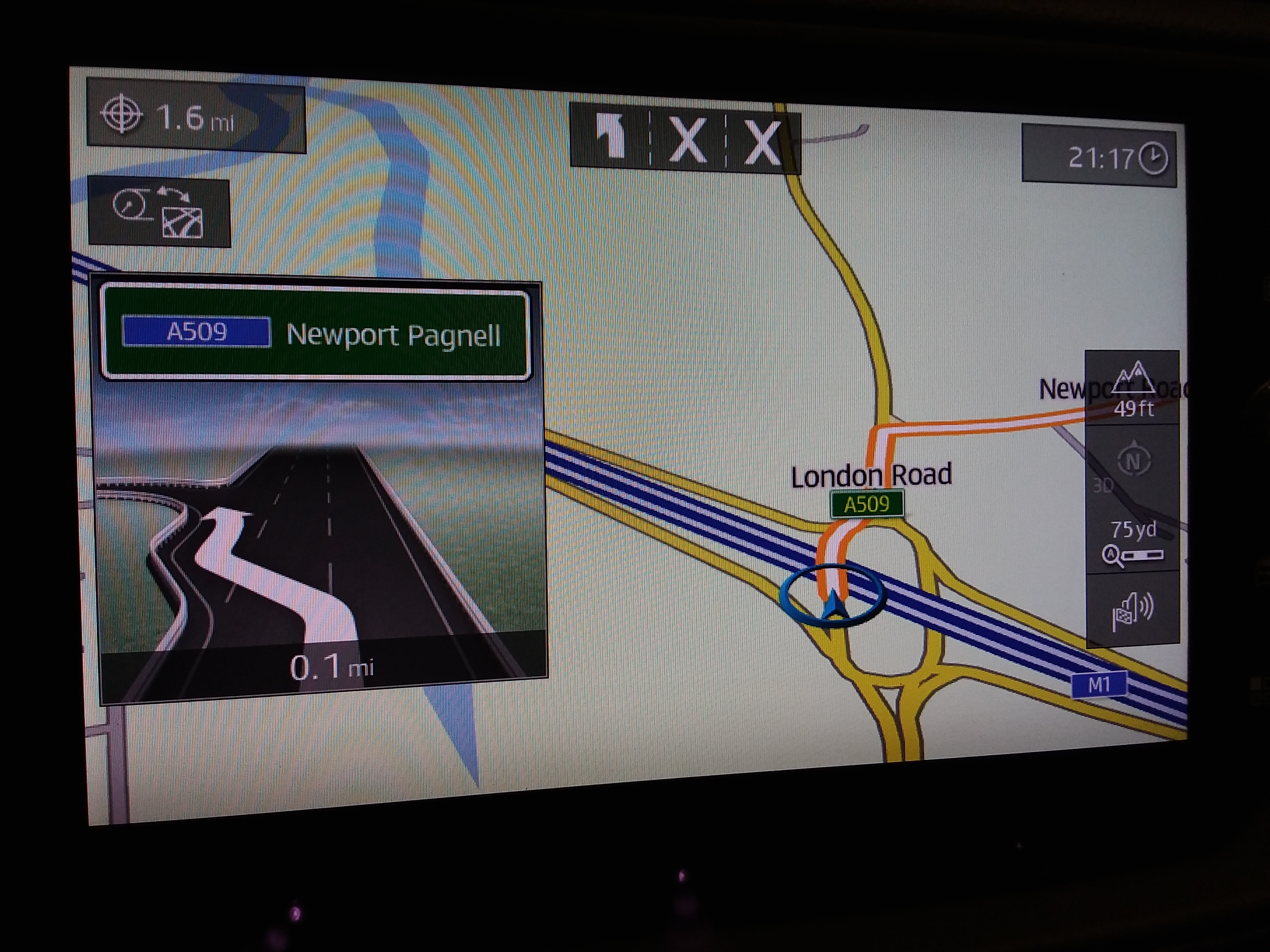 Motorways have no speed limit: 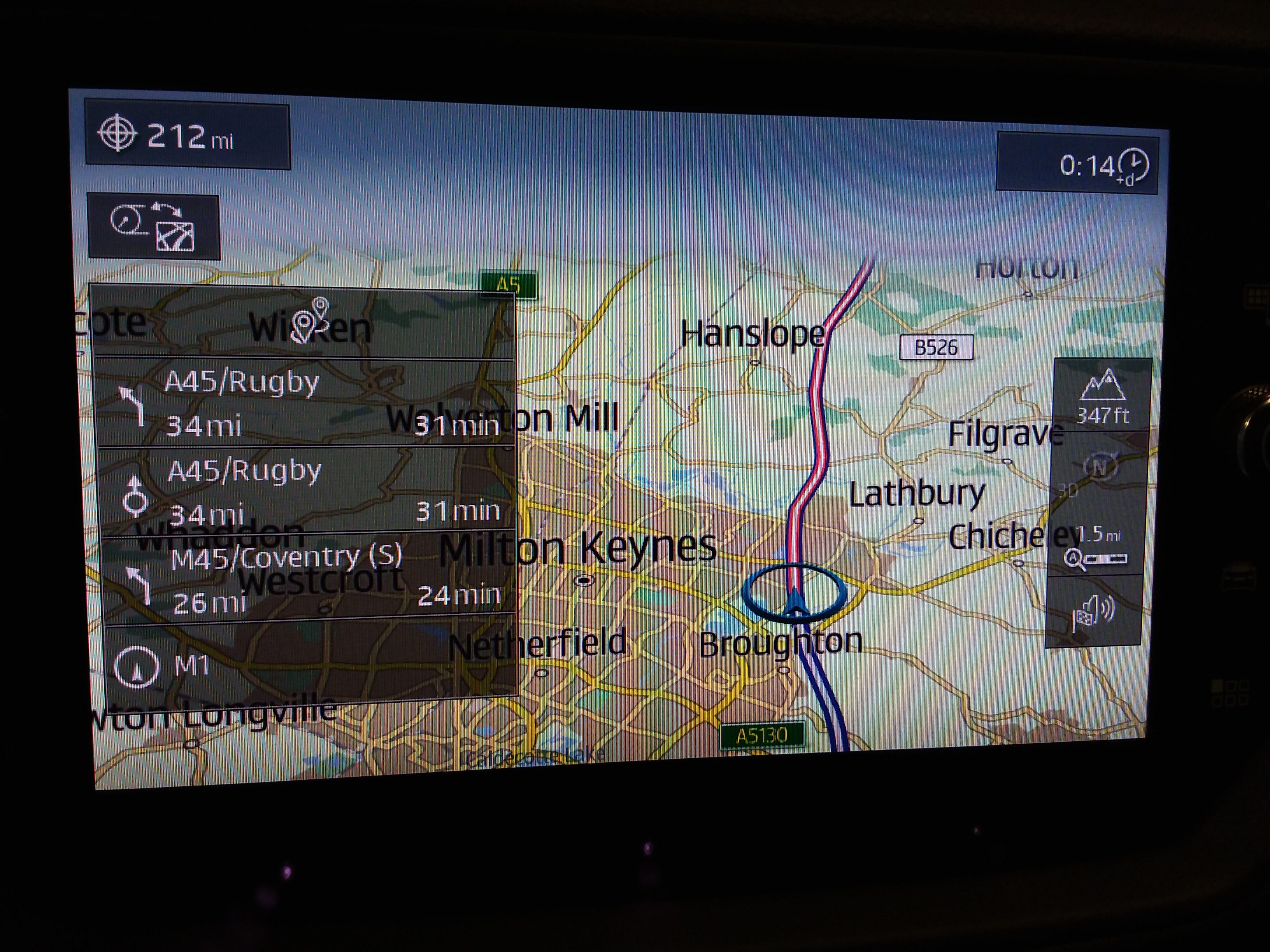 Heading into a village fine: 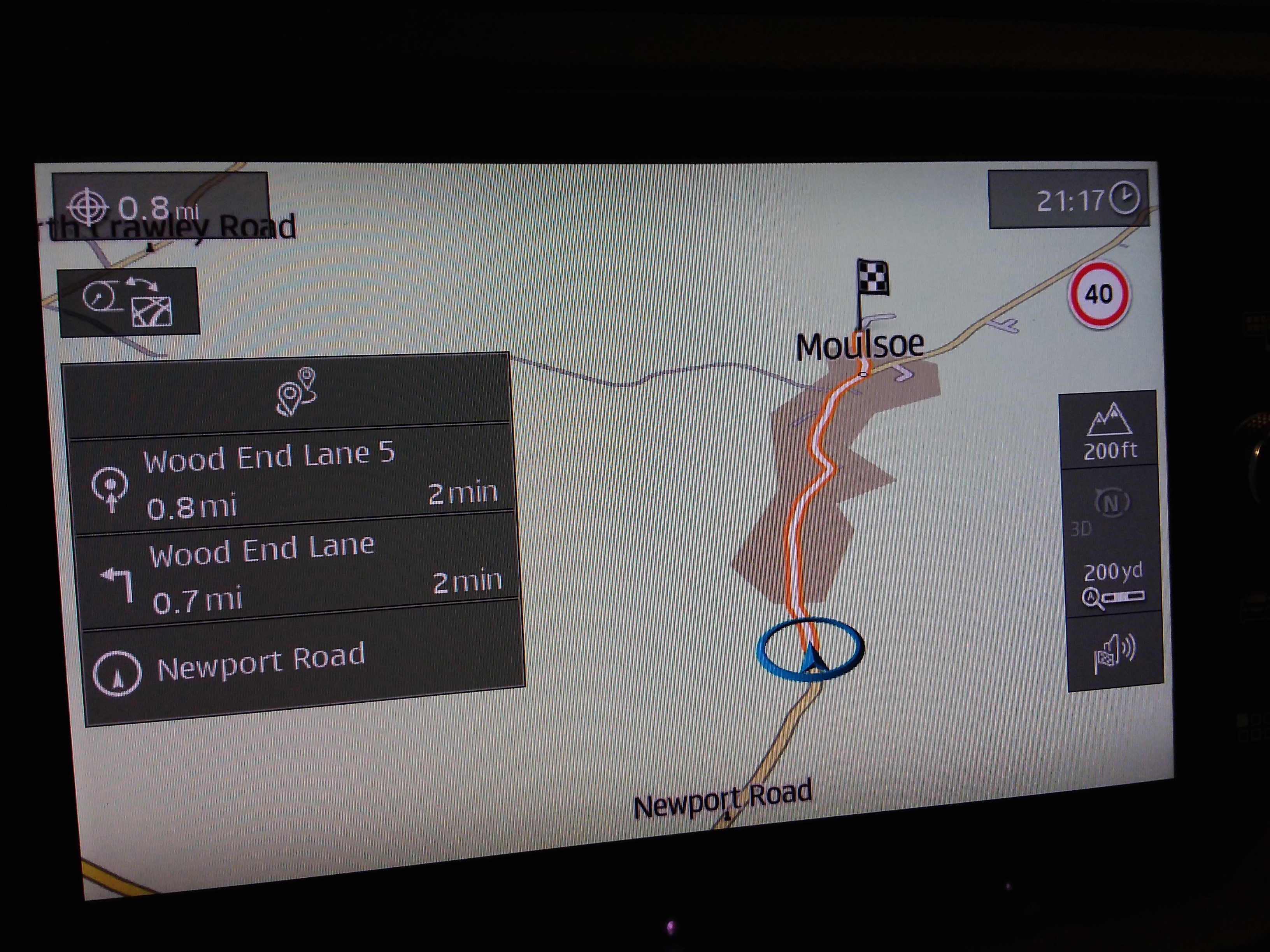 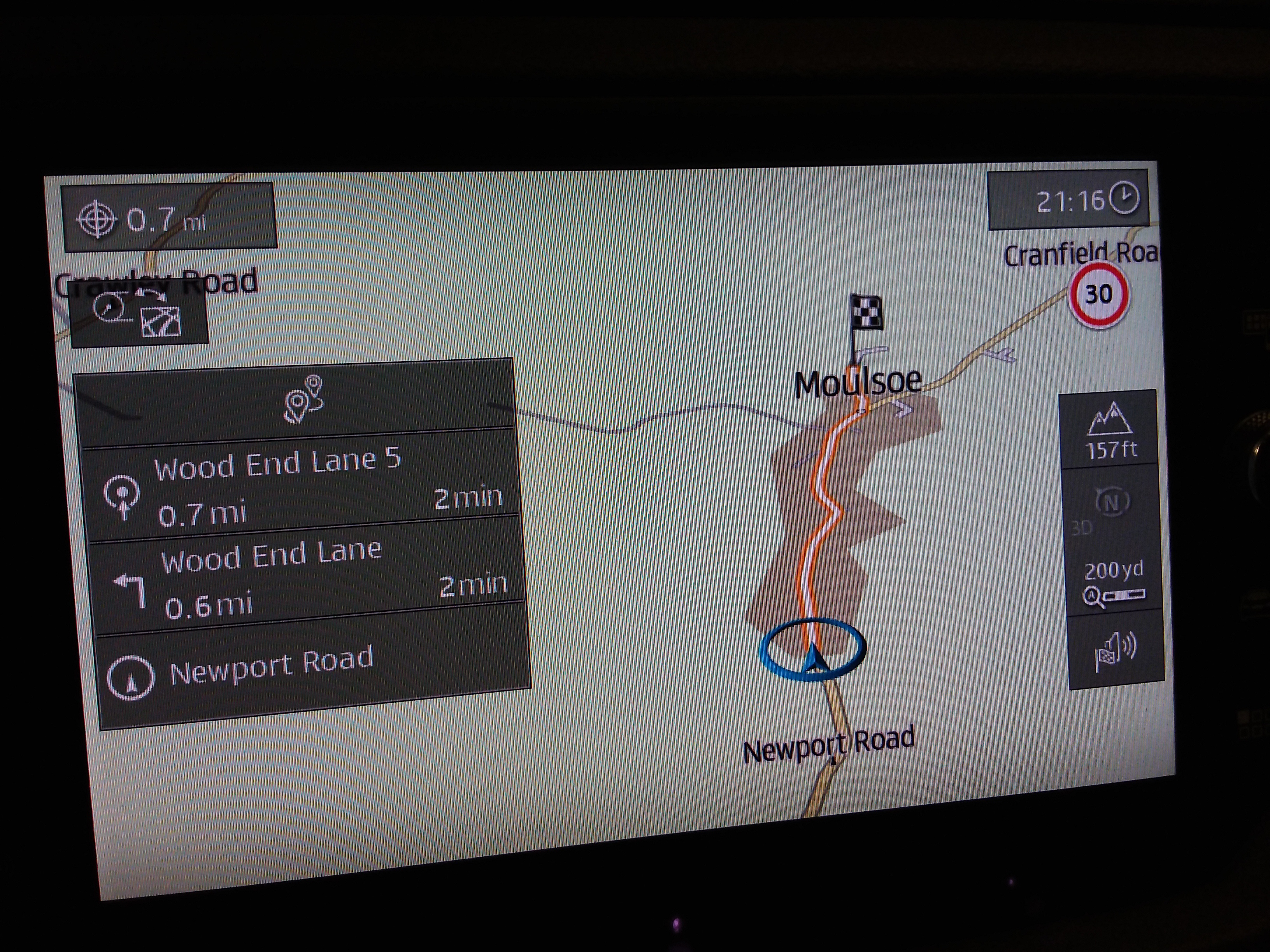 All produced from the advanced menu in demo mode... no fuel wasted .

Re-tested with the All European map

No issues apart from those covered. The part number comes up as 5F as previously with the January 2019 released VW maps (November 2018 release). This may suggest that Seat doesn't plan to release the all European maps since it doesn't have a Seat part number. Either way Seat standard units happily run on this map release. It's only a presentation field.

Those who want to give it a 6P part number feel free but it happily works without an edit. You can also give it the name of your current release and name etc but not required. In all instances of the workaround do copy the SD card off and it's a good idea to save the original Overall.NDS file in it's own directory since you will need this with each map update. Putting it in a mock directory indexing into it acts as a crib sheet:

with it in there.

Also a good idea to reboot the unit in the process of updating it. Turn off, take the SD card out. Long press on the on / off button till it re - wakes. Then once you have the files on the SD card following the workaround, reckon it's less likely to generate the SVM error which doesn't effect the working of the unit but shows up on a scan.

If a PC use 7Zip to unzip the download and copy to the PC directory first. Other PC unzip programs may work for the standard including the built in Windows 10, high is much more fussy - Vag recommends 7Zip for standard and high.

If MAC the recommended VAG software to clear the rubbish from a MAC unzip of the download map file is the free utility CleanMyDrive 2 whilst for a PC 7zip. From the October 2019 VAG pdf notes:

There are other MAC unzip tools that do the same job.
Last edited: Jun 20, 2019
Reactions: petous, slartibartfast, sebastalian and 1 other person

For those who wonder if there's going to be the whole Europe for Mib2 Standard June 2019
http://vw-mapscdn.tdd.adacorcdn.com/DiscoverMedia2_EU_AS_1310_V11.7z

lesnovak said:
For those who wonder if there's going to be the whole Europe for Mib2 Standard June 2019
http://vw-mapscdn.tdd.adacorcdn.com/DiscoverMedia2_EU_AS_1310_V11.7z

I've edited the link in above so it's all in one place.

I tried the name guess yesterday and it didn't work so they must have put it up this morning. I know some people need this.

It's the 00 partition within NDS Products where the zones are loaded but I think the rest has to be computed so it's isnt DIY to assemble these we still need VAG group . Apparently you can take another region and just take the equivalent to the 00 partition and put it there then your nav will work in Africa etc.

So anyhow you expect the bit size and contents within the region groups to be identical just all pieced together. The E directories. It's the PRODUCT.NDS which will be different if you did DIY on it for making your own Europe. That I reckon is the tricky bit.

OK it's officially arrived since it's on the web page with the date that tallies with the others:

Hi I have a 2018 cupra 300. Am I right in saying to update to the latest update above all I need to do is save the stuff on my sd card to my laptop download the new stuff above then just copy it over to my sd card then put it in my car and it will work? Thanks

Near but you have to copy the old overall.nds file back to the sd card replacing the new one since the old one is linked to the card and unit, it won't work otherwise. The so called "workaround" is documented in the quote 1695. Its all over this thread since January 2017 when Exciter and Noteabem (name almost) devised it, Exciter did the work. You see it across many boards now.

I would add after removing the card from the unit, long press on the on / off to reboot it so you don't shock the unit by changing the software. This I think is how the SVM error (software version management flag, comes up if it deems you have tinkered with the software) is generated but if you don't read the cars errors, you wouldn't know you created one. Quite a few people who have done the workaround have this error. I did reboot and escaped it.
Reactions: Matt
Show hidden low quality content
You must log in or register to reply here.